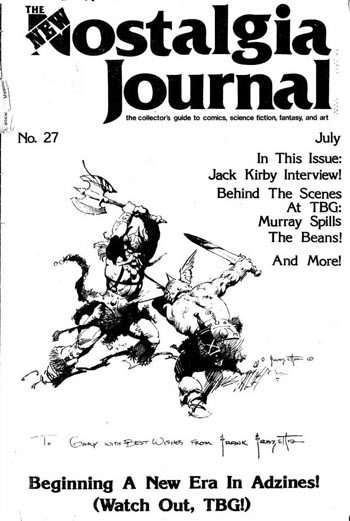 A new introduction by Gary Groth, February 2011:
This will no doubt be the first of many painful introductions to ancient issues of The Comics Journal.

I have had time only to skim this issue, which is quite enough, thank you, and have to report that it is disorienting to look at my 20-year-old self full of idealism and in high dudgeon over the scoundrelly behavior of Alan Light. (A warning; This issue should only be read by those with a  borderline pathological interest in the histories of comics fandom, The Comics Journal, Fantagraphics, or me; may there be few such unfortunate souls out there.)

I haven’t much to say about the actual contents: There is certainly some cringe-inducing writing in my long screed against The Comics Buyer’s Guide, but I have to admit that I’m impressed by what must have been an amazing amount of research and record-keeping. It makes me wonder, again, if I could’ve successfully embarked on that other career track I was interested in —journalism— and done something useful in the world.  And even in this first issue, we were trying to create an adzine with content — something unheard of at the time. Often truculently so: I like the tag line, “It fills minds, not just pages,” which I’m sure impressed potential advertisers.

A little about the circumstances:

After collecting comics and publishing fanzines as a teenager, I had gone to as much college as I could stomach (approx. three years), dropped out, and plunged heedlessly into several entrepreneurial disasters with my then-partner-in-crime Mike Catron. We were both cheerfully floundering around —working shitty jobs to keep a roof above our heads and publishing a music fanzine, bankrolled by a third party, in our spare time— when we realized we could combine our mutual interests in comics and journalism by publishing a competing adzine to the Buyer’s Guide.

I don't remember the chronology exactly, but at this same time we were working a succes­sion of shitty jobs to make the rent and somehow I noticed that my old nemesis Alan Light was playing hardball with a little competing adzine called The Nostalgia Journal. By that time, it looked like the Dallas boys who were putting it out had most of the fight beaten out of them, so, with characteristic chutzpah, Mike and I contacted them and suggested that they give the paper to us and promised them, in the event, that we'd continue it and wage a concerted counter-attack against Light's Buyer's Guide. I can't remember how we talked them into this, but I suspect they were on their last legs and decided to hell with it, let's give it to these two kids. Shortly thereafter, a box arrived in the mail with some back issues, a list of advertisers and a mailing list, and we were the proud new owners of Journal. (No money changed hands, as I recall.)

I don't really know what the hell we were thinking. We surely did not have a plan - except to channel our youthful energies into giving Light a run for his money. There was a feeling that there was a Cause here, that we were competing against a monopolist who also happened to be a creep and that energized us (and kept us energized, in various guises, for years to come). I already had a studio of sorts in my apart­ment, so we could easily put the tabloid together, camera-ready as it was then called, without any outside help (and, hence, without any expenditure of money, which we manifestly didn't have).

I mean that: we literally had no money. In fact, we may have had negative money because we'd just finished paying off monies owed on the misbegotten rock convention. Somehow, I talked a local printer into extending us credit, and we managed to print the first issue of our Nostalgia Journal (#27) for release at the big, annual July 4th New York Comic Art Convention, where we hoped to make a splash.

We wanted everyone to know that a couple of young turks had taken over and were going to pump it full of juice, so naturally, what we'd feature on the first front page was my scathing chronicle of Light's chicanery and turpitude. As Mike Dean relates in discomfort­ing detail, I was certainly in high dudgeon.

We failed to take into account the possibility that advertisers don't necessarily make decisions to place ads for old comics in an adzine based on the level of moral indignation contained therein. This was to prove a strategic misstep on our part, the first of many, no doubt, but it pretty much set the stage for more high dudgeon to come.

My firm conviction that comics was a bona fide art form and that championing the art form should take center stage at the Journal took a year or so to evolve and longer than that to truly gain its editorial footing. My previous love of comics was an adolescent love; as is embarrassingly evident, those first few years of the Journal were a continuing learning experience for me (as well as for our poor readers). 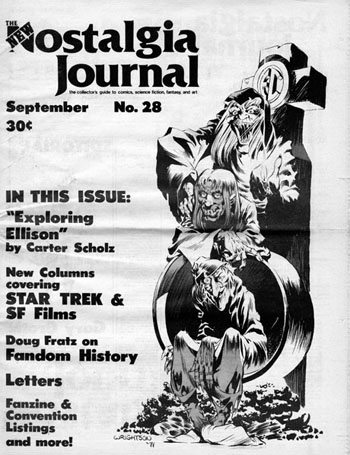