Today at the Comics Journal we've got Chris Mautner with one of his classics "I'm not sure about this one, but let me see it anyway" takes on a new comic. Will he be won over by Now, the new comics anthology from Fantagraphics, the publishing company that publishes The Comics Journal? Here's a bit of Mautner doing the work of journalism--you'll have to read the whole thing to get drunk on his criticism.

Now is edited by Fantagraphics associate publisher Eric Reynolds, who, perhaps more notably for the purposes of this review, was the editor of the celebrated anthology Mome, the last volume of which came out in 2011. The impetus behind that series, at least initially, was to give up-and-coming cartoonists the chance to showcase their work on a semi-regular basis.

Now seems to have similar goals. Reynolds writes in a brief introduction in the first volume that he hopes the anthology will appeal to the “comics-curious” as well as the serious aficionado and be a platform for “showcasing diversity in the comics field.” One noticeable difference is a focus on short, self-contained stories, as Mome frequently featured serialized narratives.

The other thing that's out there for you today? Why, it's the TCJ newsletter. An email newsletter, you say? Why yes indeed, they're all the rage (again, for some reason). Here at TCJ, we've heard your complaints about "keeping up", and we've responded in kind. Go ahead and subscribe to the only All Killer, No Filler email in the game now, while it's free. (It will always be free, it exists to drive traffic back to the website.) No: subscribe so you don't miss a review, interview, column, hyperbolic essay, my favorite comment, and, maybe, eventually, sure, exclusive "content". Who knows what that could be! (It will be something Gary comes up with.) Just head over here and subscribe now! 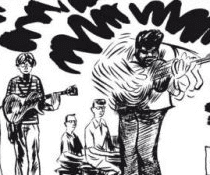