Another April Fools Day is upon us, and with it, I am sure, will be much corporate hijinkery on all possible social media platforms, no news story or product announcement safe to consider as reliable, until the bell tolls and sounds the end of the annual denial of seriousness once more.

Everyone’s exhausted at this point in the millennium, so I’ll declare this a safe space, free of any such nonsense, filled only with regular comics links, and any tomfoolery to be found below is purely coincidental, please be assured.

• Starting things off with political posting of political cartoons news, and Russia’s ambassador to France was summoned to the French Foreign Ministry after the embassy’s Twitter account posted a cartoon, since deleted, “depicting a body lying on a table called "Europe" with characters representing the United States and European Union jabbing needles into it,” said needles branded with various dog whistle phrases - the posting of the cartoon was timed to coincide with a NATO, G7, and EU summit in Brussels to discuss Russia’s invasion of Ukraine.

• The Edmonton Journal reports on the closure of Wonder Harbour Comics, following an arson attack, leaving the store unrecoverable - owner Vincent Joyall has started a GoFundMe to help with the costs of attempting to rebuild.

• Checking in with the great paper shortage of the 2020s, and Printweek shared warnings from the World Print & Communication Forum regarding long term disruption of paper supplies, with existing problems now being further exacerbated by ongoing strike actions at Finnish paper mills, set to continue into this month, and knock-on effects from Russia’s invasion of Ukraine.

• Awards news, and The Beat announced the 14 nominees in the print and webcomic categories for this year’s Cartoonist Studio Prize with the Center for Cartoon Studies, winners TBA at a date TBC; and The Daily Cartoonist rounded up the winners of the Australian Cartoonists Association’s 2021 Stanley Awards, with Cathy Wilcox winning the Gold Stanley for Cartoonist of the Year.

• In memoriam, remembering those the world of comics has lost, as news was shared of artist Garry Leach’s passing this week, aged 67 - 2000 AD has an obituary for Leach, citing his “generosity in complementing, supporting and mentoring other artists,” as well as his many other achievements in the medium of comics.

At the end of the day… This week’s reviews.

• Tiffany Babb reviews the unbalanced depths of Nathan Page and Drew Shannon’s The Montague Twins: The Devil’s Music - “Music is famously difficult to portray in a static comic medium, but by portraying music as magic, The Devil’s Music sidesteps the issue by focusing on the impact of music instead of the music itself. Some of my strongest memories of being in high school are of staying up late in my bedroom listening to music. When I felt completely alone in the world, I had songs that put into words exactly what I was feeling in a way that the people in my life could never understand.”

Ryan C reviews the personal evocations of Andrew Alexander’s Screened In Exile, the inspired execution of Charles Glaubitz’ Once Upon A Time In Tijuana #1, and unrepentant nightmarishness of Vickie Smalls’ Queen Of Knives.

- The zeitgeist capturing of Rumi Hara’s The Peanutbutter Sisters and Other American Stories.

- The appealing drama of Armistead Maupin, Isabelle Bauthian, and Sandrine Revel’s Tales of the City, translated by Lillah Campagna and Fabrice Sapolsky

- The frank empathy of Catherine Castro and Quentin Zuttion’s Call Me Nathan, translated by Evan McGorray.

- The adorable goofiness of Mike Lowery’s Bug Scouts: Out in the Wild.

- The emphatic emotions of Harriet Ziefert and Travis Foster’s I Really Want To Be First!.

• Helen Chazan has a trio of reviews, including Oumi Konomi’s From This Flame, Christine Shields’ Blue Hole #2, and Rui Takato’s Booty Royale: Never Go Down Without A Fight! Volumes 1-4.

New post: "When I find myself in times of trouble 🎼 I turn to embroidery...." https://t.co/YFG6pSFJsy

A narrative experience… This week’s interviews.

Alex Dueben interviews Eric Orner about Smahtguy: The Life and Times of Barney Frank, political day jobs, the importance of legislatively minded individuals, and starting with the narration - “Whether people like politics or not, we live in a political system. The great laws of the land – the 15th Amendment, the New Deal, the Voting Rights Act – all that was legislation. You need somebody that knows how to draft, and pass bills. And Barney knows how to do that. But unlike a lot of people with legislative skills, he also could communicate in a way that galvanized people.”

Joe Grunenwald speaks with Alek Shrader about Carmen: The Graphic Novel, growing up in an operatic household, magical equations, and learning via collaboration.

Chris Dart chats with Chip Zdarsky about Batman, new spins on old beats, newspaper origins, working for both of the Big Two, and the systems that tie up superhero comics.

Etelka Lehoczky talks to Mariko Tamaki about Surely Books, seeking out the unknowns, broadening publishers’ ideas of what readers want, and editorial priorities.

Wendy Browne interviews Alek Shrader about Carmen: The Graphic Novel and learning by doing, and Adam P. Knave about The Airless Year and the ways in which parents can get it wrong.

Such stuff as dreams are made on… This week’s features and longreads.

• Here at TCJ, Goshkin returns as Bob Levin covers the career of George Hansen, and the place of Hansen’s work in the underground comix pantheon, following publication of Sketchbook of an Artist: George Hansen and the Craftsmanship of Cartooning - “His comix splashed like children in mud. They were dirty and fun and mommy and daddy disapproved. The more repellant acts he committed to paper, he seemed to have thought, the more valuable his work became. So Bobby Fuckstick and Peter Pussyeater ran over children at play in the street and used one another for toilet paper. Rarely does much I work on in public make me anxious about people peeking over my shoulder, but I was a tad uncomfortable to find myself jotting down “jism” so frequently and parsing its implications.”

• Also for TCJ, Brian Doherty presents a chapter originally to have appeared in Dirty Pictures: How an Underground Network of Nerds, Feminists, Misfits, Geniuses, Bikers, Potheads, Printers, Intellectuals, and Art School Rebels Revolutionized Art and Invented Comix, covering the changing of the guard from the establishment to the underground - “Hefner wasn’t the only Chicago culture icon the underground boys would beard in his den. All the youngsters had an awed, weird affection for the grotesquely delineated law and order strip Dick Tracy, whose master Chester Gould oversaw the city from an aerie atop the Chicago Tribune tower.”

• Tegan O’Neil celebrates twenty years of TCJ appearances, and eighteen years of The Hurting, with the release of The Portable Hurting, currently available for free over at Patreon, and with new introductory writing, which you can read here, and read you should.

• For Drawn & Quarterly, Ryan Holmberg writes on the life and work of Mizuki Shigeru, as last month saw what would have been the mangaka's 100th birthday, and the importance of his work in the history of Japanese comics and post-World War II culture; and Zack Davisson writes on Japan's celebration of Mizuki's centennial, and what his body of work represents to readers at home and abroad.

• Over at Shelfdust, T Trewhella writes on the transformative appeal of toxic waste in Alan Moore and Stephen Bissette’s Saga of the Swamp Thing #36, and Rebecca Gault listens to the sound of silence in Grant Morrison and Frank Quitely’s New X-Men #121.

• For Women Write About Comics, Reya Enza considers the deeper artistic meanings of Tradd Moore’s surrealist variant cover for The Department of Truth #4.

• A stacked week for open-access comics academia, as New Readings has a themed issue on the Ninth Art, edited by Tilmann Altenberg and Agustín Corti, “...[exploring] the processes, devices, and strategies that characterize comics’ mobility across time, space, and media.”

• A rare open-access offering from the Journal of Graphic Novels and Comics too, as Janina Wildfeuer, Ielka van der Sluis, Gisela Redeker and Nina van der Velden focus in on the genre of instructional comics, and the design choices present in visual aids for helping a victim of choking.

• Mike Peterson rounds up the editorial beat, for The Daily Cartoonist, as the actions of Vladimir Putin, Ketanji Brown Jackson, Will Smith, and Clarence Thomas and Ginni Thomas all made the headlines.

Twenty years in the making

• The Thick Lines of Kazuo Umezu were under cross-examination once more this week, as Katie Skelly and Sally Madden took a look at Orochi: The Perfect Edition Volume 1, and Umezu’s particular brand of little creeps.

• Shelfdust Presents’ The War Effort mini-series hit issue 4 of Secret Wars, as Al Kennedy was joined by Kirsten Howard and Steve Morris to discuss the various tiny wings of the Marvel universe.

• Drawn & Quarterly hosted a fresh edition of At Home With, as Matthew Thurber launched Mr Colostomy, while also providing some musical accompaniment, and a look back at the book’s creation.

• A less controversial Cartoonist Kayfabe week this week, at time of publishing, as a rotating cast of Jim Rugg, Ed Piskor, Tom Scioli, and SPX’s Warren Bernard took a look at comics work by Barry Windsor Smith, James O’Barr, Bruce Timm, and Jack Cole, plus some Blade deposition, and Contemporary Bio-Graphics’ take on the birth of Image Comics.

• David Harper welcomed Josh Williamson to Off Panel this week, as they discussed a packed summer for DC Comics, and just how death operates in the world of perennially resurrecting superheroes.

• Publisher’s Weekly’s More to Come’s Calvin Reid spoke with Anelle Miller about what to expect at this year’s MoCCA Arts Fest, as this 2022’s comics eventing calendar reconfigures for year 3 of COVID-19.

guess what's back at mcdonalds pic.twitter.com/IzQBc9ZBYC

That’s all for this week, back again soon enough with more, as the days lengthen.

This one has been in the pipeline for a long time, super delayed due to covid backups at the printer, but coming home at long last. APs will be for sale when I have them. pic.twitter.com/cAifZSGnic 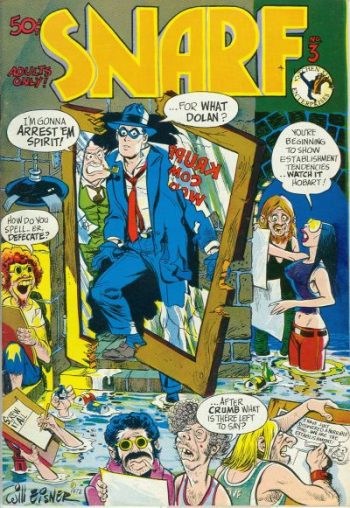 Of the Old Guard and the New Kids 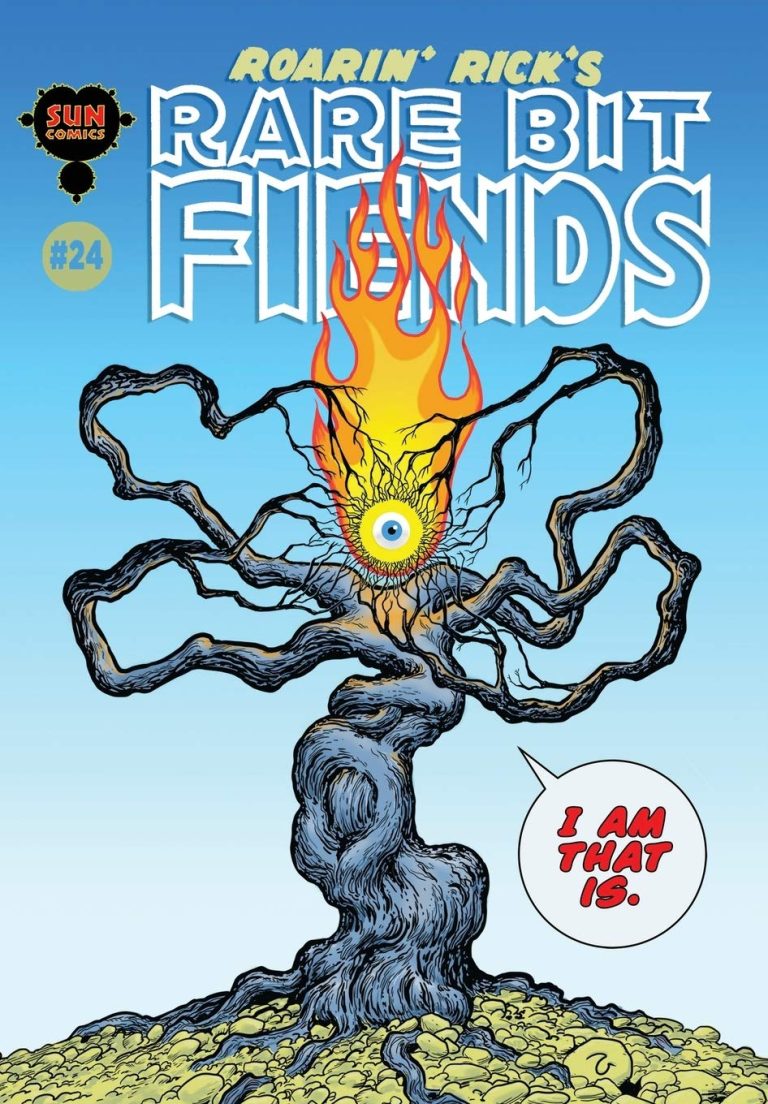 “I Really Am an Underground Cartoonist”: Talking to Rick Veitch