Robert Kirby is here without our second report on the Queers and Comics Conference:

Not everyone was there, but a sizeable, intergenerational and international mix was. And that made for an historic Queers and Comics Conference, the first ever, held at the Center for Lesbian and Gay Studies (CLAGS) at The Graduate Center of City University of New York (CUNY). I was there for the whole shebang and will do my best to break it all down, blow by blow, panel by panel. Come along with me, won’t you?

First, this: Queers and Comics (Q&C) would never have happened without the vision of Jennifer Camper, one of the Godmothers of LGBTQ cartooning, and our premier event instigator and organizer. With the able assistance of andré carrington, PhD, the committee chair, Jen brought together a diverse mix of cartoonists, publishers, and scholars “to discuss their craft, and document the history and significance of Queer Comics.” The conference was a resounding success, with a particularly strong showing of the pioneering first wave of cartoonists, and two of our greatest creators featured as keynote speakers. And all it climaxed with a bunch of us going to a hit Broadway musical on Saturday night (a gay cliché, but true).

Today we welcome Sam Henderson to the site for a week-long residency as our cartoonist diarist. Here's day one.

I didn't know about this exhibition on the work of Ira Schnapp, comics book and pulp logo designer. It looks interesting, though it also looks like you have to get through a lot of bad photoshop work to see the actual subject matter. There's something Freudian about the need comic book guys have to "curate" their heroes work by writing all over it. Penis envy? Oedipus? Just bad manners?

And speaking of sadness, here is a sadness over the state of the "popcorn" movie. 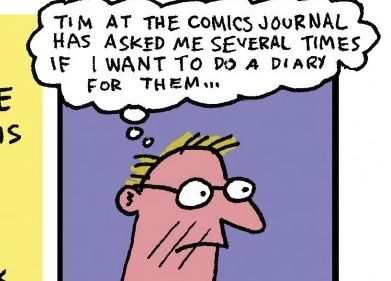 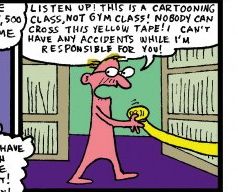