Comics people! Those marinated in comics like barreled herring filets; those of more civilian persuasion but still soluble — that grubby minicomic you grabbed off the bar, or found plugging the vent in the convention hall bathroom, which made no sense to you at the time, and probably makes even less now, was likely signed Dongery.

For the past ten years or so, Dongery has been ubiquitous at small press gatherings on both sides of the Atlantic. Or maybe not, but it certainly seems so to this reader. Dongery Magazine (“Magazine”) and various other stapled sheaves of photocopied stuff—they have just been consistently around to boost your germinated haze and color your lazy Sunday.

Now, since it’s been, what, fifteen years?, the originators have somehow managed to rope in what may be Norway’s friendliest comics publisher to collect more or less every scrap and scribble ever made by the Dongery hive mind into two huge volumes, slipcased and extensively annotated, retailing at a price point over $100. To recap: some 1,400 pages of improvised nonsense, with nothing redacted, given the full luxury treatment. I’m tempted to say, only in Norway.*

But wait, it has actually done really well! Released in the spring, it sold out quickly and it is now making waves in its second printing. OK, I should think that’s because these comics are actually a ton of fun—it seems to me a confirmation that Dongery has been on to the right idea from the beginning, even if the scuzzy fanzines they were hawking in 2004 or whenever didn’t in themselves necessarily suggest so.

Paging through these enormous volumes, it’s clear that the philosophy from the beginning was simply to draw a hell of a lot of comics and mix them with whatever other ideas—collage, prose pieces, doctored photos—occurred to the cartoonists, mash it up, and then staple together a minicomic when they had enough material. As they write: “We make our comics without a plan, and with no script. Just improvisation and pure love. It is the best way to do it. Fuck Scott McCloud. Scuck Fott Mc Loud.”

Let’s back up a bit here. Dongery is a collective comprised of six cartoonists: Benjamin “Kristoffer” Kjølberg, Bendik Kaltenborn, Anders “Damonso”, Flu Hartberg, Sindre W. Goksøyr, and Marius Molaug. Their secret origin gets told and retold in these volumes, reprinting as they do a wealth of newspaper articles, school reports, correspondence, photos, grant applications, and other scraps of their paper trail—there’s even a helpful timeline in one section of the commentary track that runs under the comics, which constantly gets interrupted by chatter.

It starts with Kristoffer and Bendik meeting at high school in 1997 and starting a makeshift claymation “studio” at the former’s house. Damonso gets involved, they meet Flu, and start jamming on comics together. 1999 sees the publication of the first issue of Dongery Magasin, after which they are joined by Sindre and Marius. The rest is history. And a prodigious oeuvre that has somehow taken them to the top of Norwegian alt-comics.

Several of the Dongery members are now sustaining fairly high-profile careers in comics and illustration, with Kaltenborn being the breakout star internationally. In addition to his award-winning (and great!) compilation Serier som vil dig vel (2009)—which has just been published in French, but is still awaiting an English-language version—he has contributed illustration to such august publications as The New Yorker and The New York Times. Hell, he was even in that book I edited, Kolor Klimax.

It’s hard to describe Dongery’s comics: basically anything goes, which means a lot of directionless nonsense, but largely in a good way. Anarchic eruptions à la Crumb; humorous “skits” without punchlines à la Monty Python; cynical gags à la Kaz; ornamental telephone doodling à la Marc Bell; disconcerting surrealism à la David Lynch; delirious fantasy environments à la Mat Brinkman… but most of all, it’s the personalities of the six authors channeled on the page in the freewheeling spirit of their cartoon godfather, the great Norwegian underground innovator Christopher Nielsen. But without his narrative drive: occasionally, the Dongery folks do try to tell a story, but most of the time they don’t, really. It’s mostly short bursts of cartoon fancy: caprices might be the term used in another era. In service of a pun, perhaps, or a send-up of some sort, or simply a particularly stupid (but likely hilarious) drawing or sets of same. Much of the time, a comic will be a jam between two or more of the members, working in succession or on top of each other’s drawings. At other times, a single talent is allowed to shine (or not).

It quickly becomes apparent that Kjølberg and Kaltenborn are the backbone. From the very beginning it’s their jams that sustain the enterprise; they provide the bulk of the material and their development is the most exciting to follow. From Kaltenborn’s early, over-rendered frenetic stuff and Kjølberg’s equally early, clumsy but still classic-looking clean line to their current, refined and subtly expressive cartooning—tight when they want to look that way, which is mostly in their non-Dongery work. It’s exhilarating on a gut level to watch them spritzing off ideas on the page, from dumb moments of language to fits of abstraction to stuff that just sits there, failing to launch.

Arguably their greatest co-creation is the characters Duncan and Folino, a classic long-and-short combo, each acting as the other’s foil: Duncan, perpetually grumpy and strangely detached (drawn by Kjølberg); Folino, endlessly hyper to the point of being slightly disturbing (drawn by Kaltenborn). Playing these “Friends for Fighting” off of each other continuously affords the cartoonists opportunities for bits of hilarious non-sequitur dialogue and silent moments of absurd humor: Folino silently awaiting a response to from Duncan over three panels as to whether he wants to play badminton; Folino trashing his office out of frustration with having to compose a courteous email; Duncan opening a letter with his nose. (Note for those who don’t read Norwegian: most of this great material is in the English-language volume).

But of course, Dongery wouldn’t be the winning formula it is if weren’t for the group as a whole. Goksøyr brings a dark, slightly intense edge to his smooth, densely inked cartoon characters (often rather successful Disney travesties, which then must be a rare exception proving the rule that Disney has been travestied way too much). This provides vital counterpoint to the lighter humorous register of his collaborators. Hartberg has a yen for the grotesque, creating some of the most heady and elaborate pages of the six, not the least in his Fagprat panel cartoons, which in more polished form has been an irregular fixture in the daily newspaper Dagbladet for the last few years. Damonso has a discrete, intellectual poetry that slips in here and there, while Molaug—the sixth Marx Brother—remains elusive throughout, leaving clues as to his presence in the form of the occasional fork-rendered zinger.

And ultimately, so many of the strips are jams, with even their creators having a hard time remembering who did what, that applying the connoisseurial eye and identifying individual hands becomes a little futile and really besides the point. Dongery is not a group of creative egos so much as a kind of dude Voltron, greater than the sum of its parts, defender of nonsense.

Of the two volumes, the first is in Norwegian and documents the history of Dongery, from the early days to international fame. (No, really. There are photos of Kristoffer and Sindre counting fat stacks in a New York hotel room to prove it!) It’s very exhaustive: even the most trifling early efforts are there, along with the trifling “mature” work, and everything in between. The second is in English and collects all of the material made for non-Norwegians, starting with Dongery’s international debut at SPX in 2004. Published in tall paperbacks, the volumes reproduce the minicomics in their original (mostly) A5 (or roughly half Letter) size, with the aforementioned commentary track and other supplementary material running underneath. All six members contribute to different degrees, creating a rambling oral history full of non-sequiturs and in-jokes.

It’s an imposing package, a little unwieldy, a little daunting at first sight, but that’s part of its deliciously megalomaniacal conceit of monumentalizing the disposable. And we’re lucky for it—delving into these tomes almost invariably yields a smile. A lot of the material is forgettable, but there’s a joy to it that sticks. It doesn’t matter if it doesn’t work overall—and it often doesn’t—because the method and the raw talent of the contributors ensure that there’ll invariably be a turn of phrase, a juxtaposition, a drawing that cracks you up. Comics. 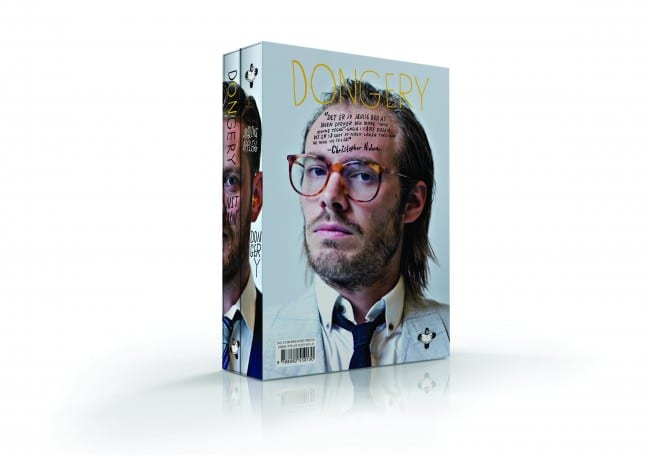 * Norway has what is no doubt the strongest public support system for comics of any country on God’s green Earth: not only can cartoonists obtain government funding to create their work, but books that meet a certain standard stand a very good chance of being approved for state-funded acquisition by all public libraries in the country. Also, bookstores are required by law, and subsidized, to keep all recent Norwegian releases in stock. 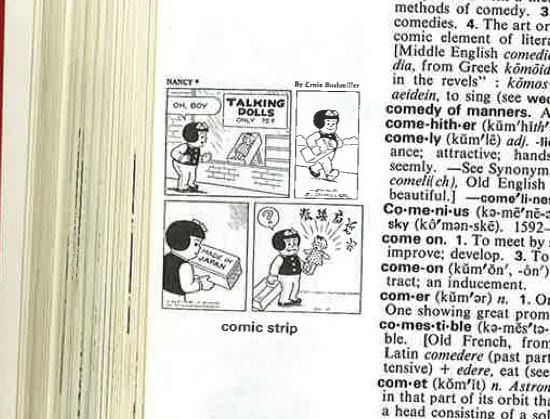