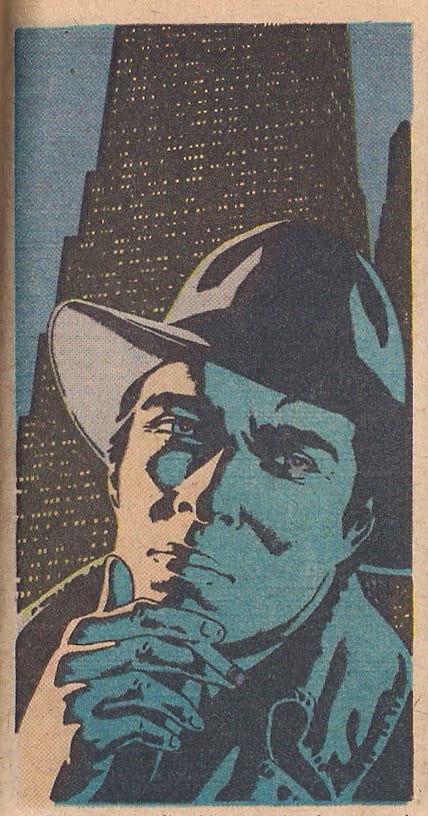 What is the first published comic that Jim Steranko drew?

It was for Joe Simon's Harvey Thriller line that a young Jim Steranko created a mini-superhero universe. By "create" I mean he conceived characters and drew full-page introductory title cards. 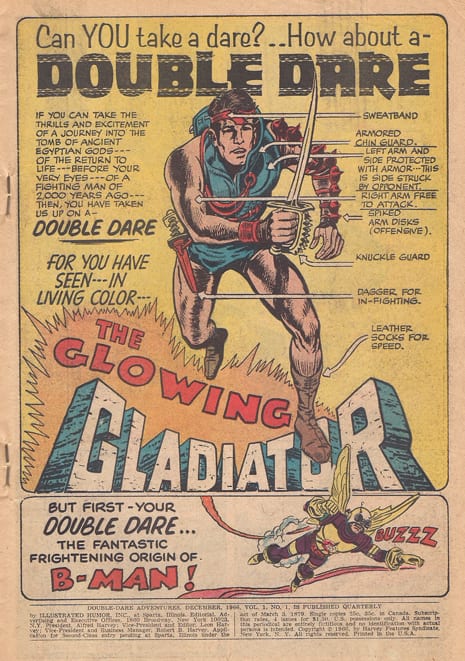 Did Steranko draw any of these stories? Well... that's where the mystery begins. The official history is that "Simon rejected his offer to draw any of the series, instead confining him to writing the scripts.[1]" 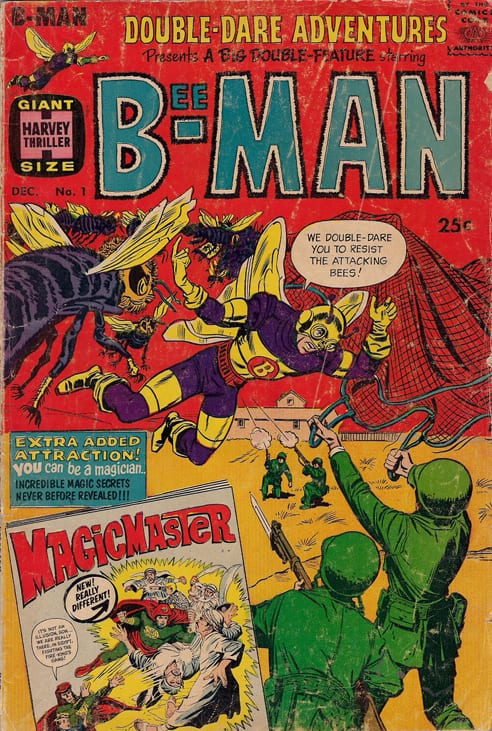 According to the Grand Comics Database there is one story in issue #1 of Double-Dare Adventures, "The Legend of the Glowing Gladiator," that at one point was credited to Steranko. The database has since been corrected by "Manny Lunch". Now the story is credited to Red Skull co-creator Eddie Herron and penciller Bob Powell .

I'm not interested in making the case that these two men did not work on the story. In the multiple-hands assembly line of comics production, I don't doubt that these seasoned professionals did their part. The case I'm making is that this work bears the indelible mark of one Jim Steranko, and is the first published comic book story he wrote and drew.

Let's look at some side-by-side comparisons of "The Legend of the Glowing Gladiator" and some bona fide Steranko images. Note the signature motifs, techniques and compositional strategies. 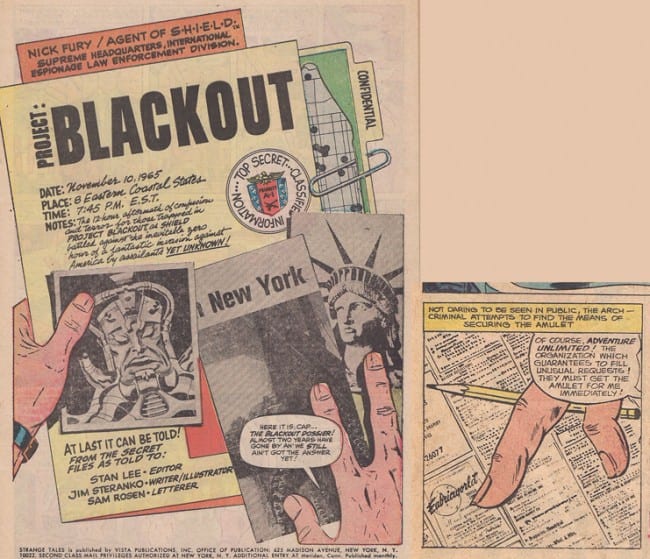 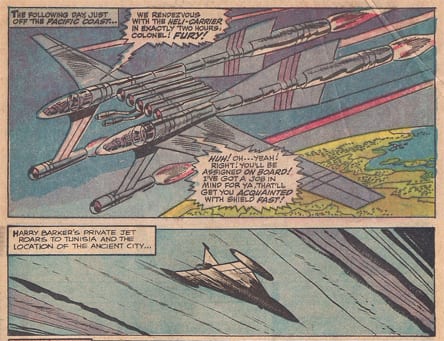 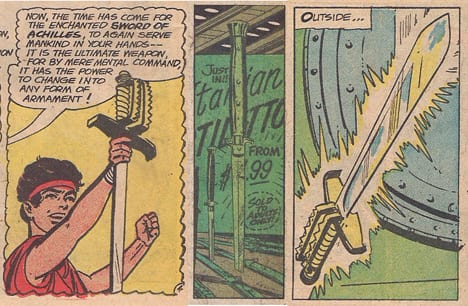 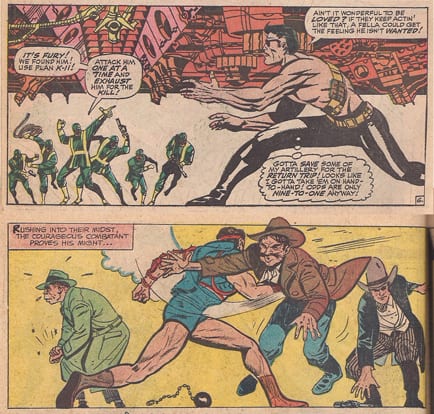 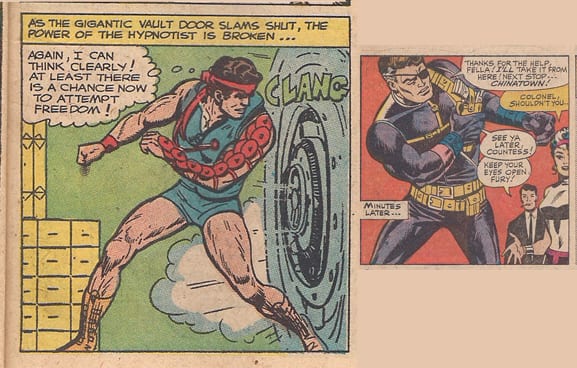 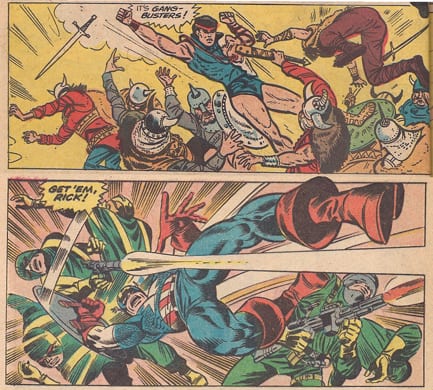 Top: DDA #1, Bottom: Captain America #110. Into the fray. Note the contortions of the figures as they're knocked down like tenpins. 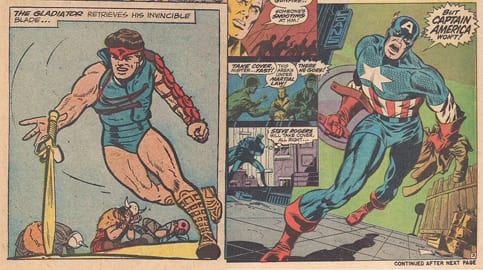 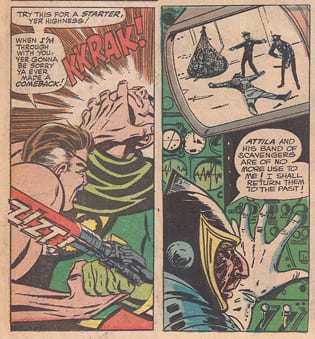 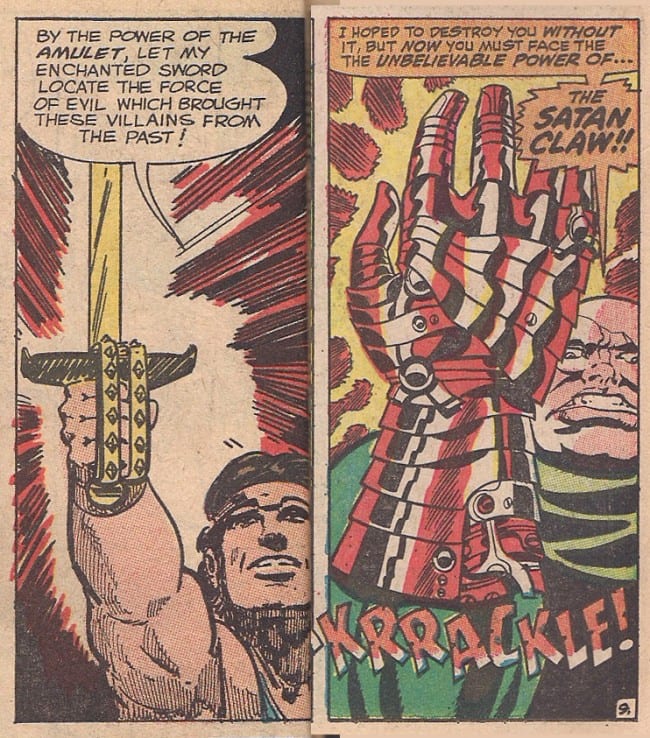 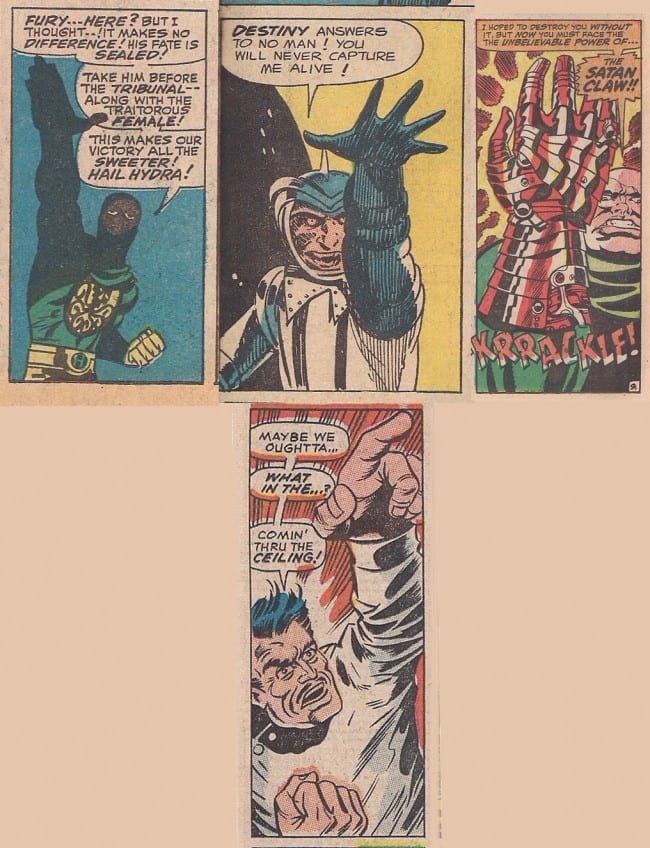 Left, Right, and Bottom: various Strange Tales, Top Center: DDA #1. I thought I'd be able to find an exact match for that center image, but these aren't too far off.  It's a uniquely Steranko-nian exaggerated perspective. Kirby's doesn't look like this. Colan's doesn't. Steranko exaggerates perspective in his own idiosyncratic way.

I recently met Steranko at a convention appearance and asked him about this story. He claimed no involvement beyond designing the character and writing the story. Why would Steranko disavow a comic that at least to my eyes is clearly his?

Maybe he didn't draw it. In researching this article I poured over the work of Bob Powell and found that he and Steranko have quite a bit in common. They share a transcendent anatomical awkwardness (in their drawing) and an inventiveness in their problem-solving. They both have a taste for clock and skull motifs and Dali-esque imaginary landscapes. In the stew of Jack Kirby, Wally Wood, Will Eisner and Lou Fine, Bob Powell is obviously one of Steranko's influences.

Steranko has a meticulously-curated, small-by-comics-standards, body of work. To have it marred by an early work, one that was possibly abandoned and taken up by other hands might be too much for the artist to bear.

By all accounts he is a perfectionist. As an artist myself, I'm painfully aware of these issues. If Steranko drew this story and wants it to remain buried, perhaps it should stay buried...but this is a story that should be shared, read and enjoyed. Beyond its historical significance as the first published work by one of the major figures in comic books, it's a damned fine reading experience in its own right. Most of Steranko's stories are around 10 pages long. At 15 pages, this is a massive chunk of his comics output.

Who is the guy who removed Steranko's credit from the GCD? Who is Manny Lunch? Urban Dictionary defines "Manny Lunch" as "when you take a work lunch that goes well beyond the usual hour allotment." Maybe Steranko left Simon Studios for lunch and never came back?

As a fan I find Steranko's comics to be a rare and precious delicacy. They're few in number and go for a premium price. Their pleasures can be difficult to extract, but are deeply nourishing. When I found this comic last month, I drank of it deeply, savoring this rollicking adventure from the man who created Indiana Jones.[2]

[2] Steranko just created the look of the character, but Indiana Jones is a cipher. The visual is the character. 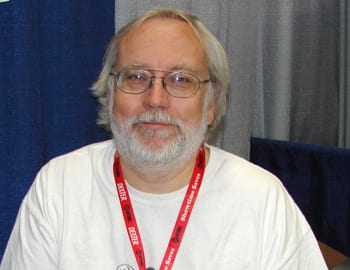 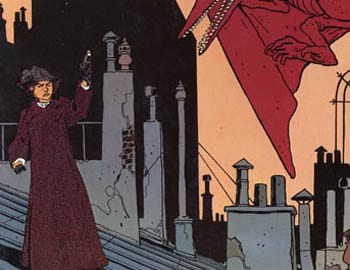