Matthew Pettit is a London-based artist who’s been making comics “properly”, as he puts it, for “six or seven years”. He publishes a solo anthology series called Wax and has a new comic, Paradise, in the latest Shortbox collection curated by Zainab Akhtar. 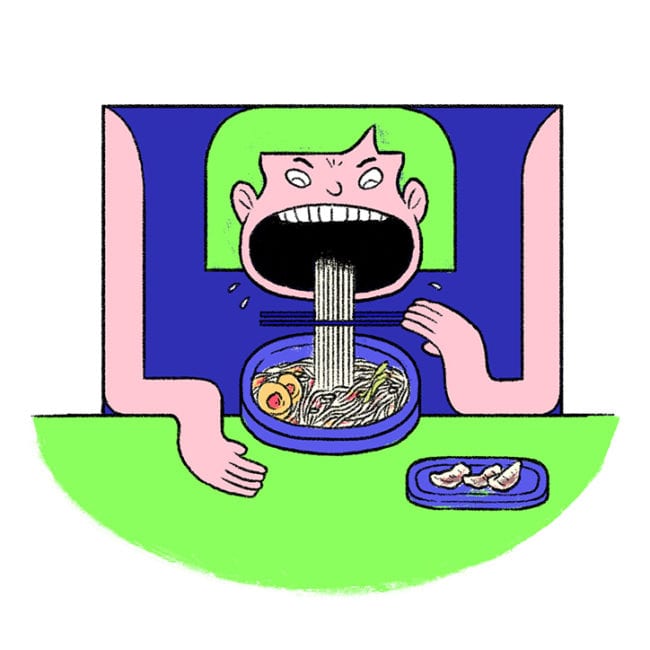 Martyn Pedler: Where does a comic start for you? An idea, an image, a character?

Matthew Pettit: It’s usually an idea. I did an illustration degree, so my background is the drawing side as opposed to the writing side of comics. But for me, when I’m making comics, the story and writing and pacing have more weight for me than the actual image-making itself. I’ve always tried to generate images, but it’s never been a way for me to start. There’s usually a small idea that becomes a bigger idea, then I start making images and characters.

People say short stories are more difficult because all the flaws sit right there on the surface. Does that go double for short, standalone comics?

Definitely. For me, everything has been very standalone. What’s enjoyable, but time-consuming, is making the world that those comics exist in. Not only do you only have finite time in the comic itself to convey what you want to say, but in the actual making of the comic you spend a lot of time thinking about the world – even if it’s only a small thing, it doesn’t have to be big and epic – and the logic of the characters. When it’s a standalone issue, you’re limited as to what you can tell. You have to have priorities if you’ve only got 20 pages. You can’t explain this giant premise. You have to decide what’s important. 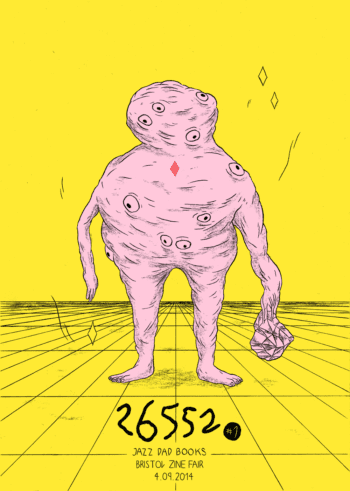 Is that something you look for in single-issue stories – that they still have a sense of “world”?

I think less so now. I used to do that. Three years ago, I tried to start a series, called 26552, which was kind of a sci-fi. I had quite a lot of things planned, and I did two issues, both 20 pages. I found from asking friends that there was so much stuff I thought I’d shown that I hadn’t. That was a big moment for me. I also remember watching an interview with Simon Hanselmann, and he was saying a piece of advice he gives to young cartoonists is to not fixate on big themes – to experiment with stories. So from then, maybe two or three years ago, I’ve tried to keep most things fairly succinct, to not have these giant worlds to convey to the reader by being really boring or with a big block of text.

I was very taken by your comic Brown Jenkins. It’s a taut little nightmare of a story that achieves so much in a couple of pages.

That was inspired by a Lovecraft story. It was just a character that really stuck out to me, and I thought it would be interesting to show that character – Brown Jenkins, who’s not really mentioned all that much. That’s an example of having the idea, and just doing it, as opposed to everything having such a huge narrative behind it. That’s something I’m trying to do more.

Horror comics don’t have access to a lot of the easy frights of cinema: jump scares, musical stings. How do you generate horror on the page?

For as long as I’ve been doing comics, I’ve been interested in how you read them. I try to design my books to use page-turns. Setting something up on the left page, the right page, and then having the next left page reveal something. It’s not really a jump scare, but it’s there. It’s important with comics because if you’ve got something happening on the top-right page, the viewer can almost subliminally see that, take that in. You can lose something.

But beyond that, with Brown Jenkins, what I was trying to do was have some sense of relatability with the character. I’m not sure I’d be able to make any kind of horror comic without some fairly human character within it. Some character who the reader can empathize with. That comic, for example – I have memories of being a kid, in the dark, maybe in an unfamiliar bedroom, and being afraid… 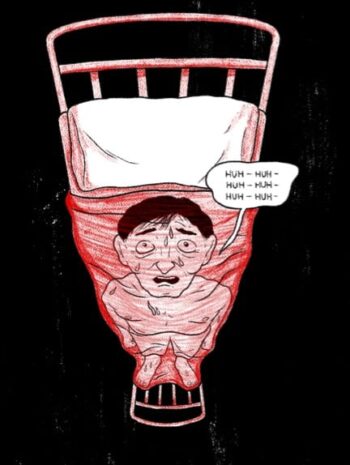 Color is very prominent in these comics. The red and black of Brown Jenkins, the purple and green of The Fields Beyond. At what point in your process do you start thinking about color?

That’s funny, actually. I really struggle with color. Only in the last year is color something I think about at all. Before that, it was a huge afterthought. I’m more aware of it now. Most of my work is designed for risograph printing, especially now. So before I start a project, if I’m printing it myself, I’m aware of the kind of colors I think I’ll use. In that way, I’m quite limited, but I kind of like that. It means that I’ve never really done a full-color comic. It’s helped me get better using colors by only having a limited amount I can use anyway.

It sounds like you create your work for print, and not for the screen. Is that right?

Yeah, I think that’s right. I don’t know that it’s smart. I think digital comics are definitely important, and I should put more things online. I design things for print, for how they look. Fields Beyond is a good example of that. I knew how the gradients would look when they were printed. It wasn’t designed for the screen. What I really should do is scan in a printed version – because I’m most interested in just having people read the comic. I’m interested in books as artifacts or objects, but that’s secondary to wanting to share a story.

Why did you choose the anti-realist body shapes in The Fields Beyond? The circular heads, the arms that appear and disappear…

That was a fairly big change in the way I was drawing at the time. My process has changed a lot in terms of how I’m actually making comics. I jump between digital production and dip pen and ink. Digital I can produce much quicker but I feel like I personally get less out of doing it. With Fields Beyond – that was Christmas last year – I remember feeling very tight in the way I was making images, and not enjoying it. I decided to try to actively be looser in how I was making things. More abstract. Using shapes as opposed to line work. I’ve semi-bounced back, in a way. Paradise is more like my older art style, just hopefully improved.

When you say you get “less” out of your digital art, what do you mean?

I don’t know what it is, but I like putting ink to paper. Now I usually work on translucent vellum. Having an original, taking enjoyment in drawing a good panel, thinking “that scene works” – I find that I get that more with traditional media than digital. I’ve been working with digital for so long. Before I was making comics, I was working with a tablet for most of my illustration work. I felt like I could cheat a lot of stuff. It became too sterile, like a job, going through the motions. But it is much quicker. There are pros and cons, but I get more enjoyment out of working traditionally and seeing the pages in front of me. 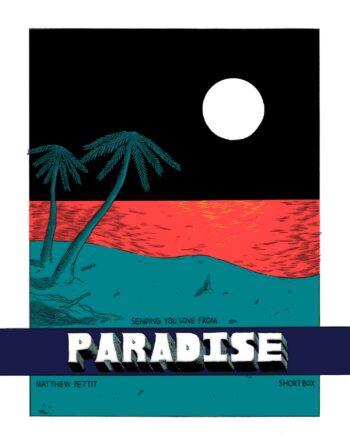 Can you talk a little about Paradise, your comic in the Shortbox collection? For many, it might be the first piece of yours they’ve seen…

That’s what I was really excited about. I don’t have a large audience, so the opportunity to make something that more people would read was great. Paradise is the journey of two boys – someone said it was weird that I called them “boys” as they’re meant to be about 16, 17, and early 20s. I guess “young men” is more appropriate – and it’s their journey as ex-gang members or bandit runaways. It’s set in a different time, semi-dystopian but not explicitly. They’re wandering aimlessly, almost just trying to survive, but it’s about how the aggression of their past has permeated through them, particularly the older character, and how that’s projected onto the younger character.

For those just discovering you in Shortbox, what do you have coming up in the future?

The big thing I’ve been thinking about while making this – and before, actually – was a larger story in somewhat of a similar universe as Paradise. It’s like what I was saying: when you create a story, you have to create that world. I was interested in not doing that again and using something I already knew, so I could jump right in. And also my solo anthology series called Wax – another one of those this year as well.

After all these short stories, do you think you have an epic, thousand-page story in you busting to get out?

I’ve definitely got one – I just don’t know if it’s a good idea! I don’t know if it’s what I should be doing. I’ve tried it with 26552 and it just wasn’t a good time. I absolutely loved it at first, but I got way ahead of myself in planning and realized that the whole thing was full of holes. I don’t know. I don’t like the idea of thinking “this is going to be a thousand pages, this is going to be an epic” because I feel like I’d ruin it. I’d kill it somehow, and end up boring myself. But I hope so. I have ideas for longer stories and want to spend more time on projects. I can see the next comics I produce being longer. 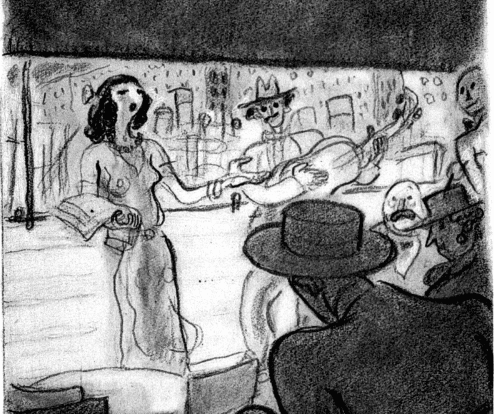 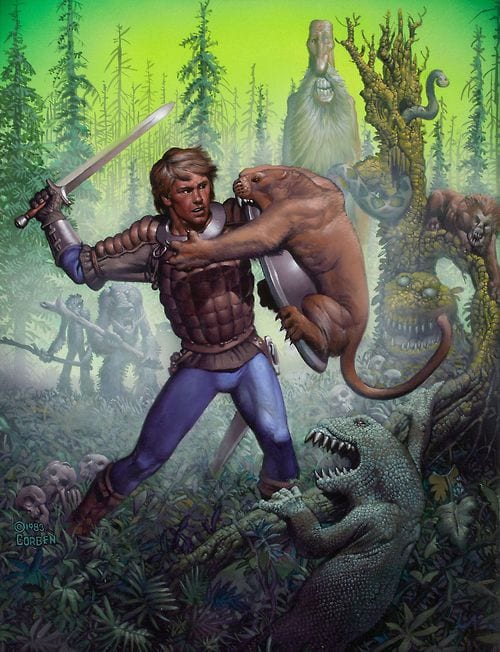 How We Must Raze This Son