I know this is classically "TCJ" of me, but "Will Eisner Week" seems silly. I like Eisner's work very much, particularly The Spirit and the near-hysterical melodrama (that's a good thing) of A Contract with God, the gauzy false history of The Dreamer, etc. But the ongoing deification of the man does his actual achievements a disservice. As Gary Groth has written many times (that it's never sunk in is a testament to the unique mix of self-love and self-hatred that is comic book culture for men over the age of 40. What my generation does with all this stuff is up for grabs. Maybe nothing. Maybe it'll be "Fletcher Hanks Hangover Day" in 30 years. Or "Rory Hayes Mondayz".) the best way to appreciate an artist is to be realistic about what he did. I'm all for appreciations and weeks and blah blah. Couldn't it just be Will Eisner Day: A guy who managed to make a buncha good comics and inspire people? Or Will Eisner Weekend: Read comics by his assistants! Or Will Eisner Hour: Read Hawks of the Seas! 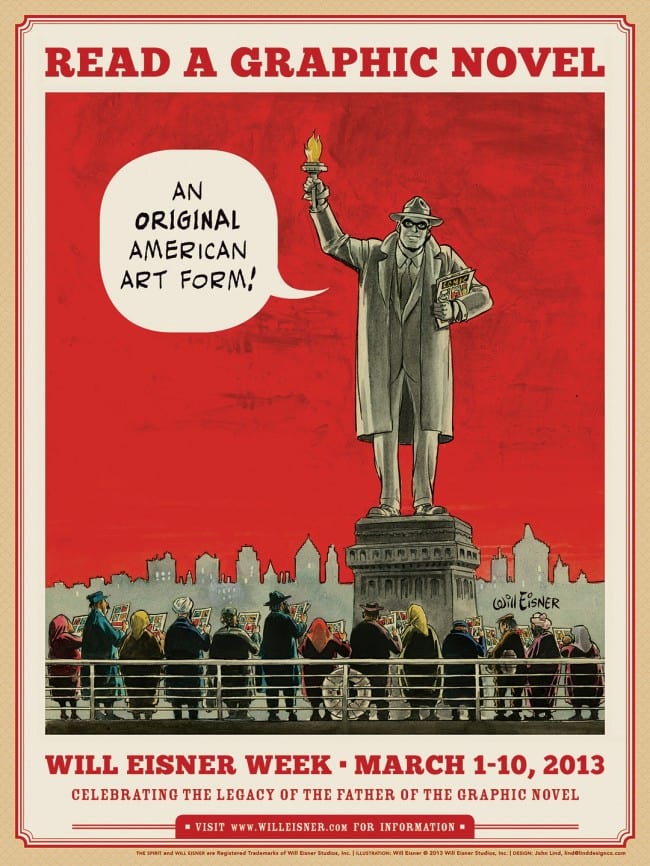 Eisner is neither the father of the "the graphic novel" nor is said "graphic novel" even a "uniquely American art form". He was a popularizer and an advocate. This has all been written about ad infinitum over the last decade or so. But! Writing this kind of thing is more or less pissing in the wind. This precise little blog post will not convince anyone. No argument can, actually. There's a kind of calcified fandom in place rooted in a striving emotional attachment to a father figure and the hopes for acceptance of the idols of one's youth. Kind of like the terrible "nerd culture" that's sprung up. It just won't budge. It's not disingenuous: I think that whoever wrote those taglines actually believes them, and all that takes is a certain passivity and (maybe) willful blindness. I suppose the irritation on my end is that obscures the facts and pushes what limited resources there are in this medium onto something both false and unnecessary. Telling someone to read a graphic novel is like saying "Watch some TV" or "Read a Poem". Why in the world would that matter? Well, anyway, another ranty aside down the hatch.

Well, speaking of Boss Groth, here he is with a sadly truncated interview with artist Jerry Moriarty.

GROTH: Do you think all the arts have essentially the same creative process: writing, painting, making music?

MORIARTY: I think that they share. I think collaborative arts are different. I recognize certain tricks when I see Actor’s Studio guys on TV talking about their process. Christopher Walken, on one of the shows, he said something about, they’d all get their scripts, and he would go through his script and take all the punctuation out, so he wouldn’t know if it was a question or whatever. And so he delivered a line without any knowledge of whether it’s a question or exclamation, so the actor he’s playing to would freak. And I just love that, because it’d make the other actor improvise, somewhat. Of course, he’s in the dark himself, because he took all the punctuation out. I think that’s nice.

Another actor said that, on the stage before an audience, if you got to the point in the part where he’s supposed to cry, he doesn’t cry, because he wants the audience to cry — because if he did cry, then the audience wouldn’t have to cry, because he fulfilled what the need was. I love that, so when I hear these things, I find connections.  But I think the real distinction is collaboration, because they have to work with someone else in that moment, whereas writers and artists generally don’t. So, it’s like a tightrope, there’s no support at all. No net at all. You survive the fall, but you know the fall exists. There’s no support structure for you. It could be a lifelong thing, like the Henry Darger life — I don’t know if he sensed that. I think there are differences. Jazz comes the closest to my sensibilities.

It's a Groth-a-palooza. Here he is on the other side of the mic with Tom Spurgeon.

Steven Heller writes about the new Al Capp bio over at The Atlantic. That book, which I just finished, is long on gnarly anecdotes about Capp (which I'm all for) and very short on any kind of aesthetic analysis or coverage of the process of making that strip. Kinda like author's bio of Will Eisner. If you're gonna write one of these books it seems odd to be disinterested in the visual aspect of what your subject did.

Two recent tributes to the late Spain Rodriguez. One from Artforum and another, an absolutely essential memoir by the great Ed Sanders. Don't miss it, at the very least for Sander's description and accompanying photos of an art show he mounted at his space, Peace Eye, in 1968. If this reaches Ed Sanders somehow: We'd love to see more of those photos! Was this the first gallery exhibition of underground comic art?

More underground: A little bit on a previous iteration of Robert Crumb's published sketchbooks. Click around for a nice cover gallery.

And finally, Gavin Lees reports on an Elfquest panel at this past weekend's Emerald City Comicon. 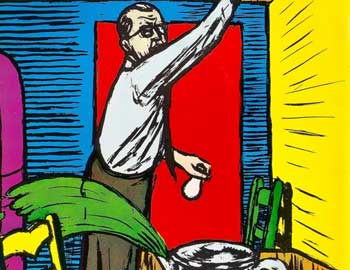 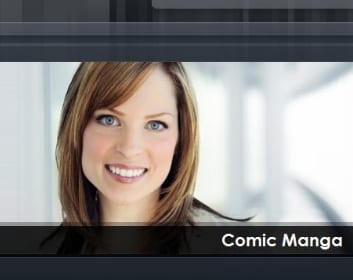 THIS WEEK IN COMICS! (3/6/13 – A Wafer Duly Spat to the Floor at the American Secular Mass)