Mervyn “Skip” Williamson became a fly in the ointment at an early age; a thorn in the side of polite society throughout his whole life. He left this mortal coil unbowed and unrepentant on Thursday from complications of organ failure and the frailty of all flesh. He was a cartoonist who became a painter and a writer, and a firebrand during the countercultural revolution of the 1960 and '70s. He never grew up, he often said.

In his memoir Spontaneous Combustion, Williamson described early skirmishes with rules and expectations, like getting busted in third grade for drawing cartoons on his textbooks, and stealing copies of Walt Disney’s Comics & Stories from the local drugstore in Lynchburg, Virginia.

In 1952, when the Democrats nominated Adlai Stevenson for their presidential candidate, 8-year-old Williamson chose to support him. “I was beaten up in the schoolyard that year for wearing a Stevenson for President button, and forced to wear an ‘I Like Ike’ button. It was my first visceral lesson regarding the unhealthy potential of unpopular ideas.” Neither incident deterred him from choosing his own path in life, though. “At the time it was just another thumping,” he wrote. “In the long run, it was a harbinger that foreshadowed my art’s unsteady relationship with Authority over the years.”

His comic career began in 1961 when he sold a gag cartoon to Harvey Kurtzman’s Help! magazine. He was an active participant in the network of small mimeographed comic fanzines that spewed out of garages and basement across suburban America in those years, including Wild! Blasé, and Williamson’s own amateur publication Squire. His teenage colleagues included future cartoonists Jay Lynch and Art Spiegelman. 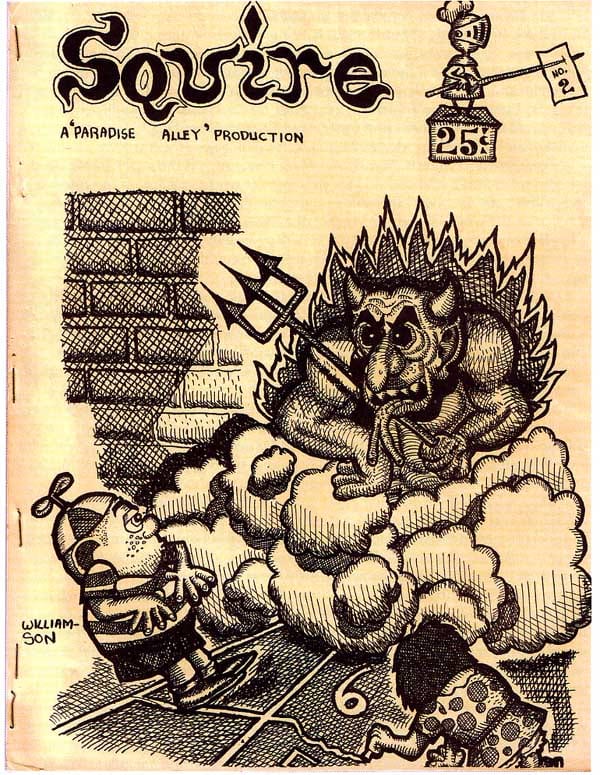 He moved to Chicago in 1967 to join Jay Lynch to form the Bijou Publishing Empire and disseminate the gift of their art to the wider world. They both began contributing covers and cartoons to the Chicago Seed and the Old Town Underground Newspaper, and soon put out their own magazine, The Chicago Mirror, which morphed into Bijou Funnies after three issues. The underground comix movement was launched in 1968 with the appearance of Zap Comix #1 in San Francisco by Robert Crumb, who came to Chicago a few months later and helped them put together Bijou Funnies #1. Only half a dozen underground comic books were in existence by the end of that year, but within five years there were hundreds of titles, sold as “comix” to differentiate themselves from that dull nonsense put out by the “overground” comic publishers. 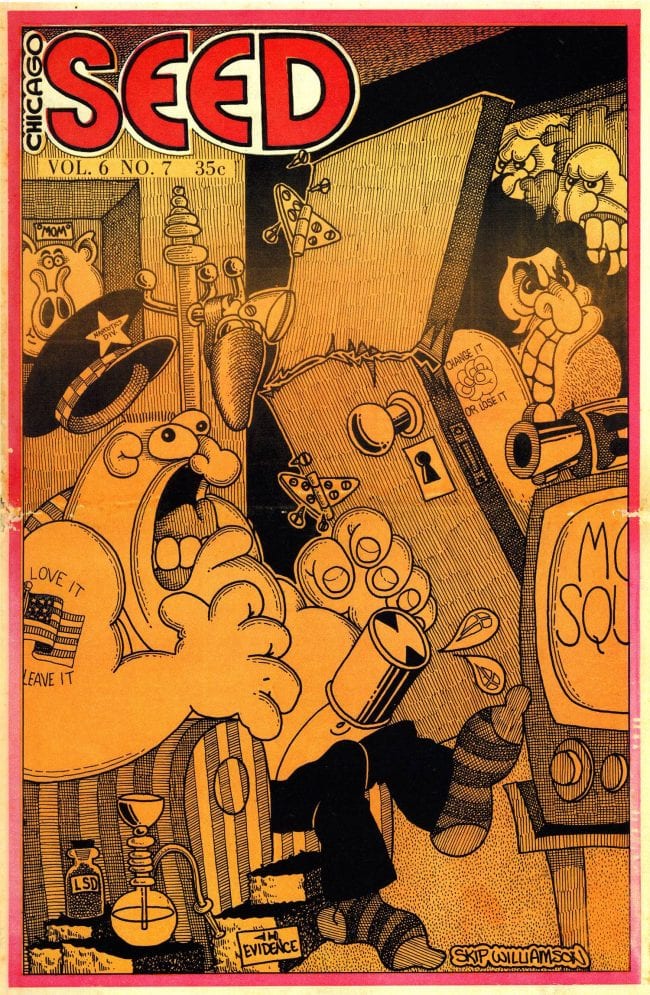 Williamson was aligned with radical politics and demonstrated in the streets during the 1968 Democratic Convention/Yippie riots and many other anti-war protests. He drew illustrations for Jerry Rubin’s Do It! and We Are Everywhere and Abbie Hoffman’s Steal This Book. He also covered the trial of the Chicago Seven as a courtroom artist and edited the comic book Conspiracy Capers, a fundraiser for their legal fees. 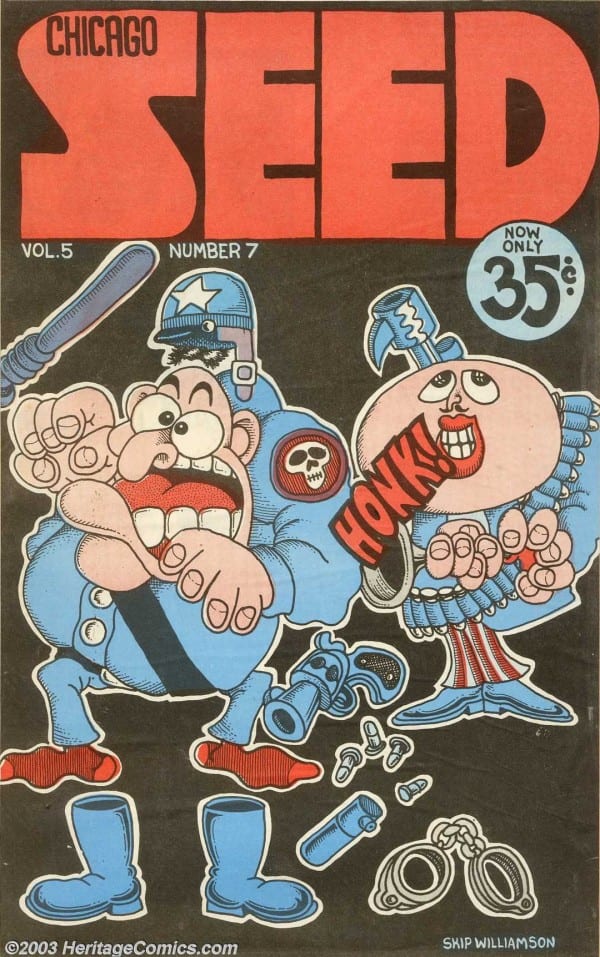 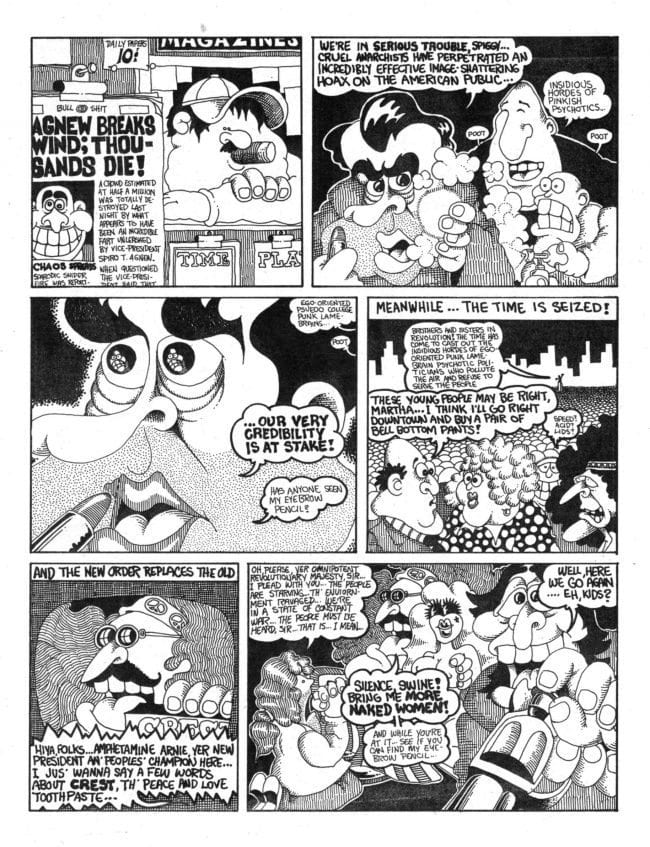 His day jobs included stints at ad agencies, and as art director for various men’s magazine publishers, including Playboy, Gallery, and Hustler. He liked to say he got all the jobs that Robert Crumb turned down during the comix era. 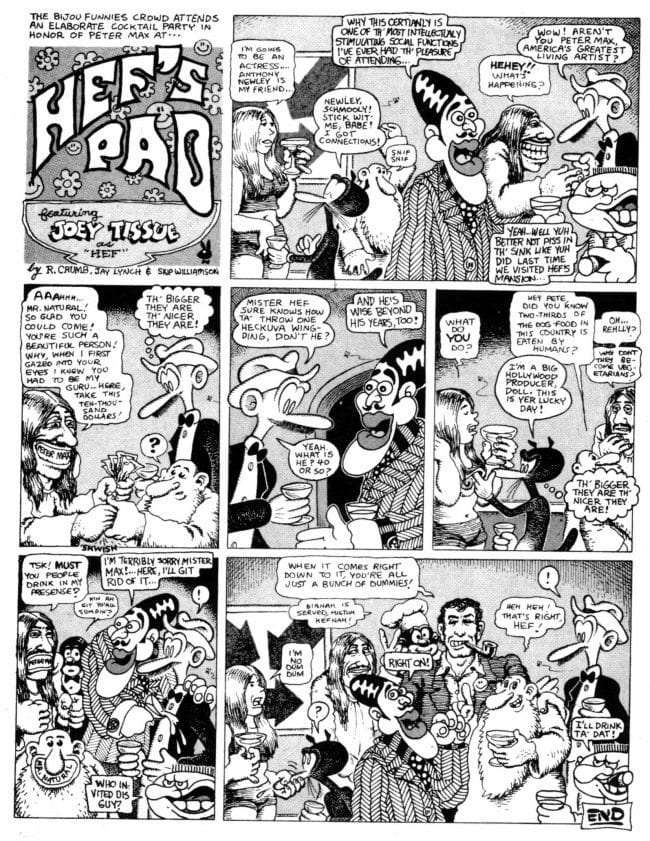 His work appeared in various anthologies in the post-underground years, including Blab! Zero Zero, and Mineshaft. He self-published several paperback collections of his comics, including Naked Hostility, Class War Comix, and Smoot, a paean to his notorious creation Snappy Sammy Smoot. 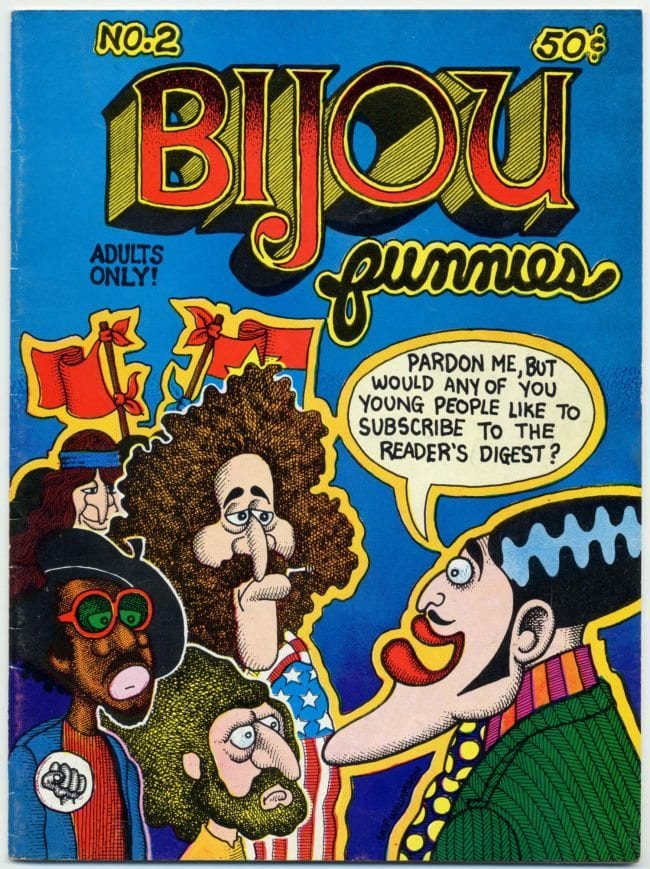 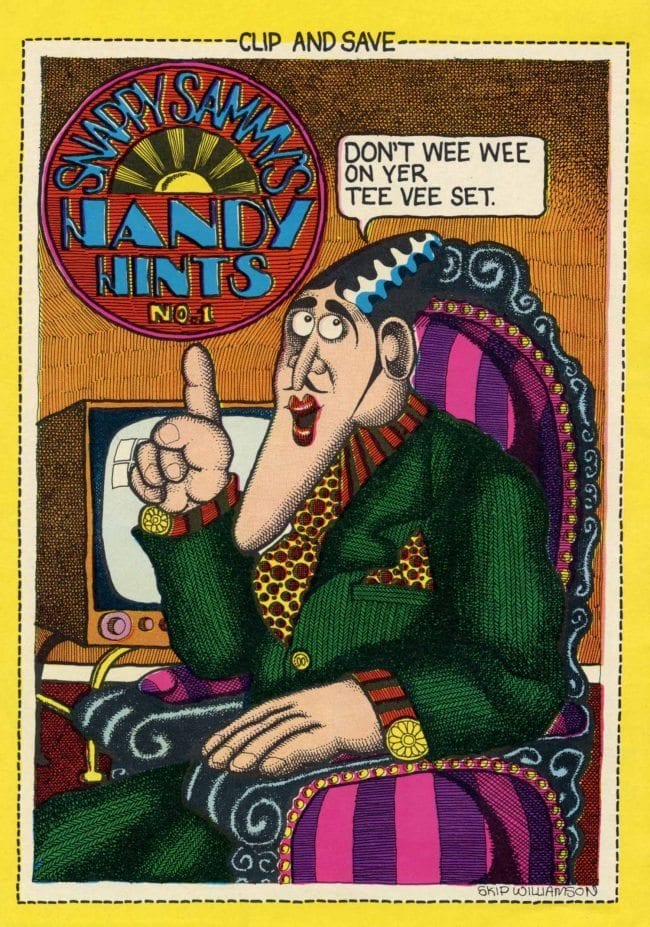 He relocated to Atlanta, Georgia in 1994 and started painting full time, with exhibitions at the Eyedrum Art & Music Gallery and Vinson Gallery. He moved to Vermont in 2010.

He was married four times, to Cecilia Einhaus, Francy Stanford, Harriett Hiland, and finally to Adrienne Morales. He is survived by four children: Megan Williamson, Molly Hiland Parmer, Nikki Williamson-Weiner, and Rita Williamson. His remains will be cremated and no funeral service is scheduled, according to his widow.

He and she were total soul mates from the moment they exchanged comments on a poetry website in 2012, Morales said. Their first phone conversation lasted hours. “He had heart and soul and I was wishing he could be mine. I could love him the way he deserved to be loved.” They met in person a few months later and were married on June 11, 2015, in Vermont.

He died at Albany Medical Center at 12:30 pm on Thursday, March 16th. “We were both romantics,” she said in a phone call during her ride home to Vermont. “We are fucking yin and yang. We are that thing, and nobody knows. He was the bright light in my life.” The official cause of death was renal failure and complications from heart disease and diabetes, but it was an antibiotic that killed him, according to Adrienne, who declared, “He was in perfect health before he went into the hospital.” She described how Skip recently cut a toe while trimming his nails with his antique Confederate-era jackknife. It became infected and swollen and a local doctor prescribed Bactrin, which damaged his liver and kidneys. The doctors in Albany were trying to counter the effects of the medication when he died.

Williamson left for posterity hundreds of pages of comics, and a home full of large and small canvases that speak wordlessly of his passions and personal visions. He lived for the moment, and took many chances, but lived to a ripe age. He was a genuine revolutionary, a vital force in underground comix, a player in Playboy’s hedonistic heyday, a prolific painter, and eventually a Grand Old Man of Comic History. His life story was recently documented by filmmaker John Kinhart, in his feature-length biopic Pigheaded, which traces his personal life and career. The film played in two film festivals to date, in Washington, DC, and in Newburyport, Massachusetts, which Williamson attended. A DVD has not yet been released. 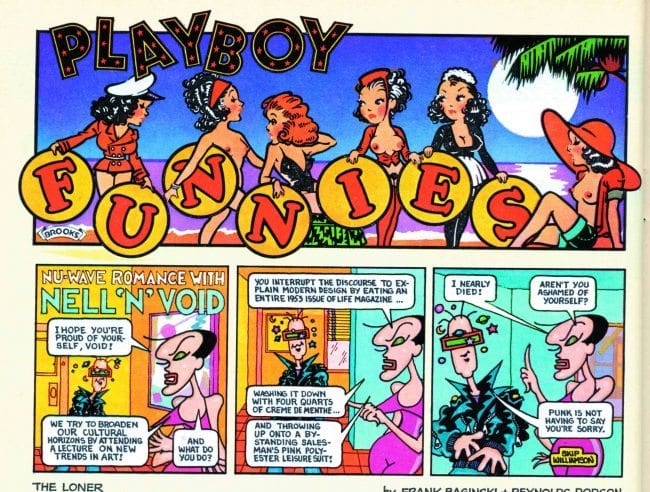 “He told me he was hard to kill,” said Kinhart. “He said he would soon be recovered from his heart failure last year and back to a full life. “I’m going to miss him. He was a lot of fun. He was very intelligent. He paid attention to the whole spectrum of society. I’m going to miss him a lot.” 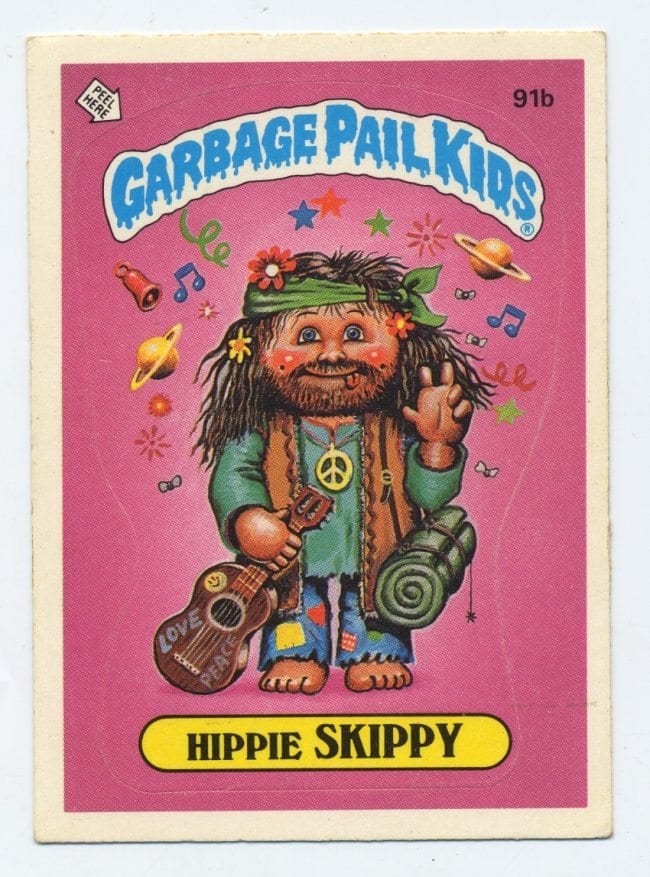 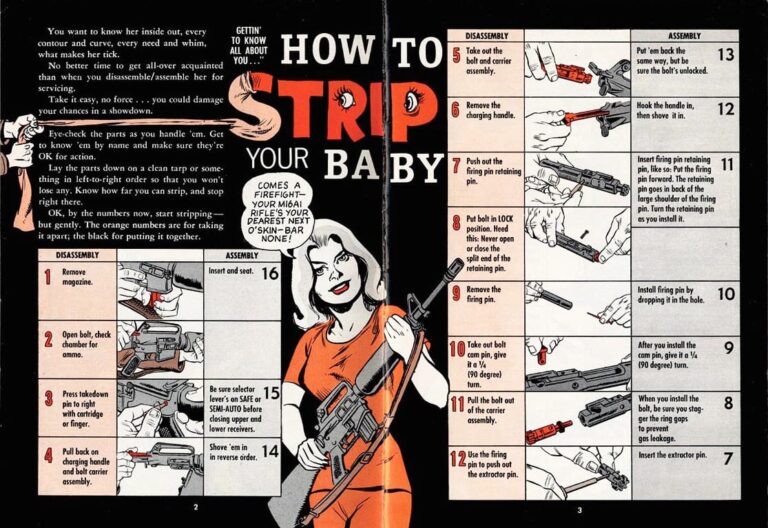 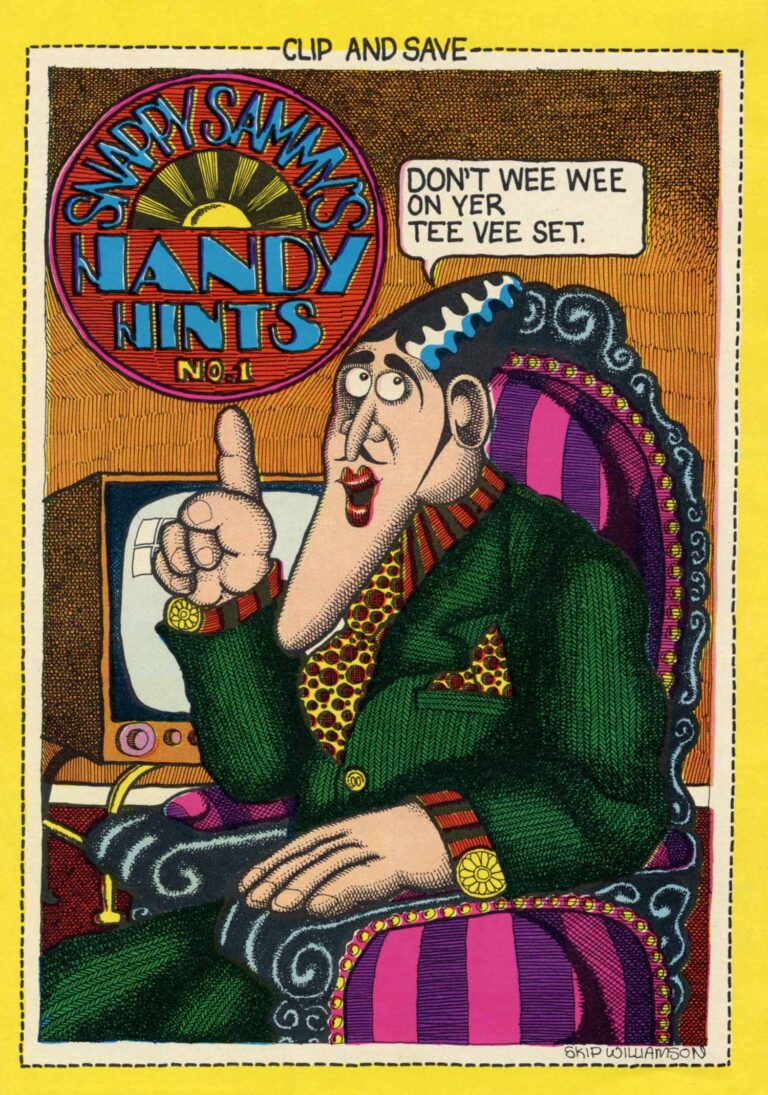