Today Charles Hatfield returns with a review of Bernie "The Jam" Mireault's latest self-published book, To Get Her. An excerpt:

My own knowledge of Mireault dates to his collaboration with Matt Wagner and Joe Matt on Comico’s Grendel, way back in 1987 (an arc later collected as The Devil Inside). That collaboration put Mireault on my radar, and so I dug into his quirky, low-rent superhero pastiche The Jam, a generally lighthearted riff on the genre but laced with semi-autobiographical, underground-flavored elements. The Jam began as a backup serial in the Canadian series New Triumph back in the early mid-'80s, then began to find its own way after 1987 (Comico published a one-shot after the Grendel run that I glommed onto very happily). By the mid-'90s I thought of The Jam as a humorous but soulful alternative to superheroes-as-usual, a project that, despite its fitfulness and its caroming between publishers, promised what Mike Allred’s Madman also seemed to promise at the time: life, energy, and homespun storytelling within the straits of that oh-so-familiar genre. I dug it the way I dug Allred’s work, and Mike Gilbert’s work on Mr. Monster, and the way I still dig Paul Grist’s myriad superhero comics.

And we've also opened up the archives to bring out a 1986 panel discussion with Alan Moore and Dave Gibbons about Watchmen, moderated by Neil Gaiman. Here's an excerpt:

FROM THE AUDIENCE: Do you actually own Watchmen?

MOORE: My understanding is that when Watchmen is finished and DC have not used the characters for a year, they’re ours.

GIBBONS: They pay us a substantial amount of money. ..

MOORE: … to retain the rights. So basically they’re not ours, but if DC is working with the characters in our interests then they might as well be. On the other hand, if the characters have outlived their natural life span and DC doesn’t want to do anything with them, then after a year we’ve got them and we can do what we want with them, which I’m perfectly happy with.

GIBBONS: What would be horrendous, and DC could legally do it, would be to have Rorschach crossing over with Batman or something like that, but I’ve got enough faith in them that I don’t think that they’d do that. I think because of the unique team they couldn’t get anybody else to take it over to do Watchmen II or anything else like that, and we’ve certainly got no plans to do Watchmen II.

Also, I thought I'd draw attention to one other part of the interview, regarding the comic's connection to Charlton comics. Moore explains:

I started mapping out a few ideas, and originally it was just a murder mystery, “Who killed the Peacemaker,” and that was it. We sent all this stuff to Dick Giordano and some of it was extreme. We were going to treat the Question as a lot more extreme than he’d been treated before. Dick loved the stuff, but having a paternal affection for these characters from his time at Charlton, he really didn’t want to give his babies to the butchers, and make no mistake about it, that’s what it would have been. He said, “Can you change the characters around and come up with some new ones?” At first I wasn’t sure whether that would work, but when Dave and I got together and started just planning these things out, it all really snapped into place and worked fine. I’m much happier now doing it with original characters. It’s worked out much better than it would have done if we had used Captain Atom, Blue Beetle, and all the others, and I’m pleased with it.

Emphasis mine. The whole, depressingly common argument that Watchmen is just a ripoff of Charlton characters, and thus everything is now fair game is risible. The Question and Rorschach are not the same characters. If DC were planning a miniseries featuring characters who were sort of reminiscent of the Comedian and Dr. Manhattan and Sally Jupiter, etc., no one would be batting an eye right now.

Anyway, speaking of which, David Brothers has an enjoyably vicious editorial on the publication of Before Watchmen here. His thesis?:

Buying Before Watchmen is a vote for:

Brothers draws attention to a recent USA Today story on the series in which DC co-publisher Dan DiDio offers the following mind-boggling quote: "The strength of what comics are is building on other people's legacies and enhancing them and making them even stronger properties in their own right." An inspirational way to start the morning! Maybe it's best if we moved on to other topics ...

—Such as DC's sales figures, which Marc-Oliver Frisch analyzes here, and more or less convincingly finds (albeit with less than ideal information), that the New 52 initiative gave only a temporary positive push to sales.

—Dept. of Interviews. James Sturm talks to Julie Delporte. Graeme McMillan talks to Jessica Abel and Matt Madden. Ashok Kondabolu (!) talks to Ben Marra. And finally, an interview with the late Harvey Pekar from close to his passing has come to light.

—I don't think we've yet mentioned Tom Spurgeon's annual head-exploding guide to attending the San Diego Comic-Con, and it's probably because neither Dan nor I wants to come to terms with the fact that we won't be there.

—And if you've ever wanted a chance to talk (and buy) comics in person with our Sunday columnist Frank Santoro, this weekend in NYC is the time and place to make your dreams come true. 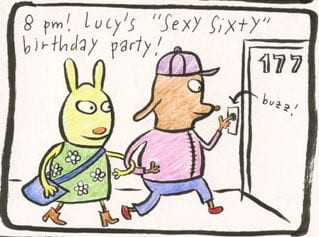 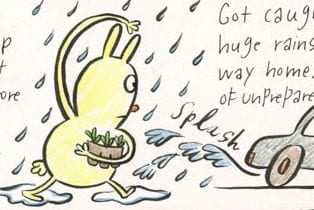