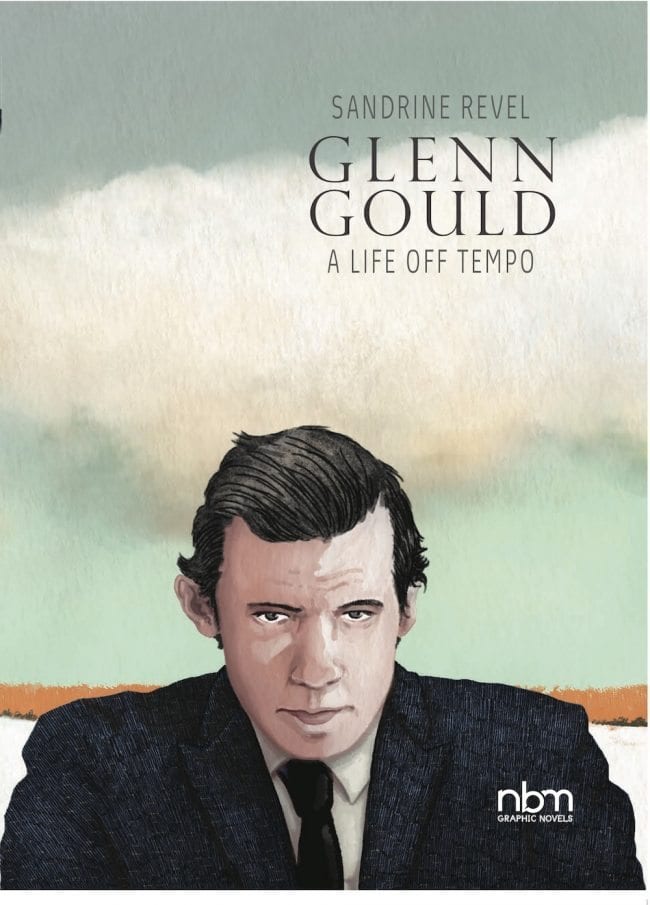 Sandrine Revel has been working as a cartoonist and illustrator in France for the past two decades, though Americans likely only heard of her last year when NBM published Glenn Gould: A Life Off Tempo. The graphic novel is a biography of the great pianist, famous for his interpretations of Bach, but what was most striking was how Revel approached her subject. The book is beautifully drawn in stunning colors, but from the opening pages, it’s clear that this is not a typical biography. Instead Revel seeks to use the form to get inside of Gould’s mind, to get a sense of how he thought about and saw the world. As one who has heard recordings of Gould but knew little about him except that he was Canadian and considered eccentric, the book was a stunning revelation, both for its insight into Gould and to witness an artist working at the height of her talent.

The book has been successful in France and Revel received the Prix Artemisia for the book. Revel has had a successful career in France where she has collaborated with writers on a wide range of books including N'embrassez pas qui vous voulez, La lesbienne invisible and Interieur Jazz. The series Un drôle d'ange gardien, which Revel collaborated on with writer Denis-Pierre Filippi receieved an award at Angouleme for young readers. Revel has also written and drawn a number of books inlcuding Le 11e Jour, about her experiences in New York on September 11, 2001. We exchanged e-mails before and after the holidays to discuss the book and her work.

Thanks to Terry Nantier and Stefan Blitz at NBM for arranging the interview. 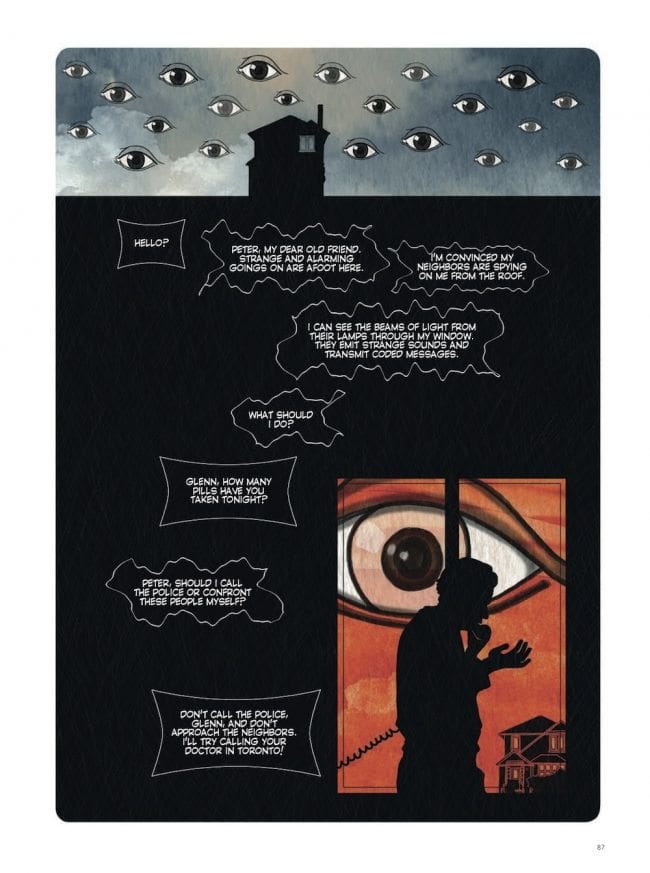 What interested you in making a biography of Glenn Gould?

I’ve been dreaming of this for twenty years. I discovered Glenn Gould while learning to play the piano. What attracted me to him was his legend, his way of playing, his mystery, his need for solitude. He played for himself more than for others. A great personality for comics.

The first five pages of the book make it clear that this is not going to be a typical biography. I wonder if you could talk us through what you were thinking with those pages and why you wanted to start the book that way.

In these first few pages I wanted to set the tone. Embark the readers within the first few panels in the fantasy world of Gould. You discover the first panels like the first notes or measures of a prelude of Bach. We start the story inside the mind of Gould, which remains the thread of this graphic novel.

How do you typically work? When you’re writing, do you script the book out in detail? Did you work that way with this book?

When it’s just me, I don’t write a script. I know what I don’t want and what my intentions are. I write very little, the story is stashed in a corner of my mind. I draw a lot, I quickly put together the more important sequences and I compose adding links. Justifications, parallels. When in doubt, I try to redo a page, a sequence, I modulate a great deal before being sure of the result. My ideas come to me often while walking my dog in the forest. So as to be quick in execution, I work on a pen tablet. This tool allows me to be faster in the creation process.

As far as the structure and approach of the book, was there another graphic novel you had in mind as a model?

Not one specific model, but many. That includes movies, novels, painters, all too many to mention, that influenced me. The hardest is choosing between the useful and the useless and not become seduced by someone else’s idea. I have to be careful of that when working on it. 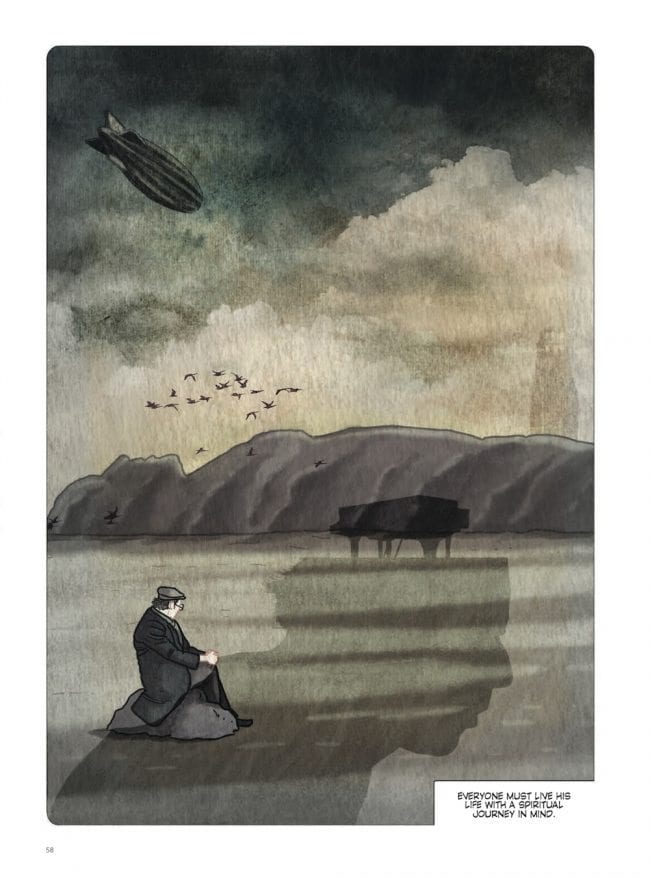 At any stage did you consider making a straightforward biography of Gould? Or did you always think of this as a book about how he thought as much as about his life?

When I started work on this biography of Gould, I didn’t know yet which direction to take. To start, to reassure myself, I began with with a script very faithful to the chronology of his life. Then I started to draw and realized I was taking a wrong path because the more I advanced, the more I got bored. Gould is far from a boring person. Quite the contrary, he was impulsive, instinctive, surprising, mysterious, and I had to respect all his character traits in the construction of this narrative. So I started all over again, I demolished what I had done to better deconstruct it. I don’t regret taking at first a false path, it allowed me to better understand him. 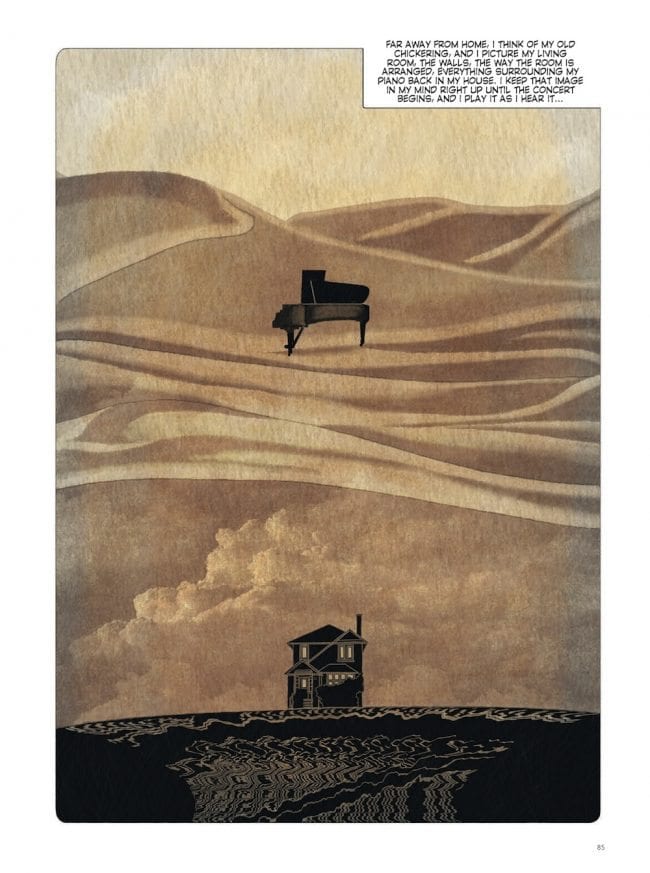 How did you decide on the subtitle, “A Life Off Tempo”?

At first, I meant to use the word ‘counterpoint’ a Gould specialty. In fact I built my story leaning on this musical concept and working on a narrative form of that. it’s while walking my dog with my friend, we were looking for a title and she suggested “contretemps” – French for setbacks, or musically: offbeat – and we kept that as it reflects the book’s intention.

[Note from Terry Nantier: we played with this and came up with “Off Tempo” as a musical concept with a similar meaning.]

In your career you regularly work with other writers on books like N'embrassez pas qui vous voulez with Marzena Sowa, and La Lesbienne Invisible with Oceanrosemari. Then you also write books as well like this one and others. Are you interested in writing more? Do you like alternating?

What I detest most of all is boredom in work and to counter that I change up, alternating my method of working. Writing remains my weakness and I like to associate my universe with wonderful authors when the subject interests me. To write more? Not my goal, but there are subjects I’d like to approach solo. Right now I’m drawing by myself two books which are very different in theme which touch me personally: one is about a dog and the other on painting. See? I like touching on everything, almost.

You paint the book and I wondered if you could talk a little about how you used color. Your use of red, the skies, you very clearly spent time thinking about how the book should look.

As I noted above, I produced the comics entirely on a pen tablet using the aquarelle technique. For me, color is just as important as black line. I’m used to finish my drawing with color. This is a very important phase which I can give no one else.. the skies are nuanced with greys, blues, yellows as are the Gouldian skies: “I always assumed everybody shared my love for overcast skies. It came as a shock to find out that some people prefer sunshine.” The red punctuates the story and provides enhancement to the whole. Absence of skin tone on the characters with just a contour around the face and hands shows fragility and transparence.

I’m curious what you found challenging about illustrating music or at least finding a visual accompaniment to the music, which seemed to be what you were trying to do in parts of the book.

Quite frankly, I mostly wanted to do a graphic novel on music before I ended up with Gould. In my bibliography there’s an experimental comic “Interior Jazz” which came out fifteen years ago where I was already attempting to draw music in a story. I had to find narrative tricks to imagine hearing music. It comes from Gould’s body language during his concerts, drawing his hands on the keyboard, the mechanics of the piano, etc. rhythm is brought forth from the layout.

How do you think of Gould? Has your perspective on him changed over the course of making this book?

I so invested myself in this project that I feel like I knew Gould. It’s crazy. He’s company to me everyday as if he were part of my family. What do I think of him? Wonderful. He was a complex, passionate, original man. A visionary we all miss. 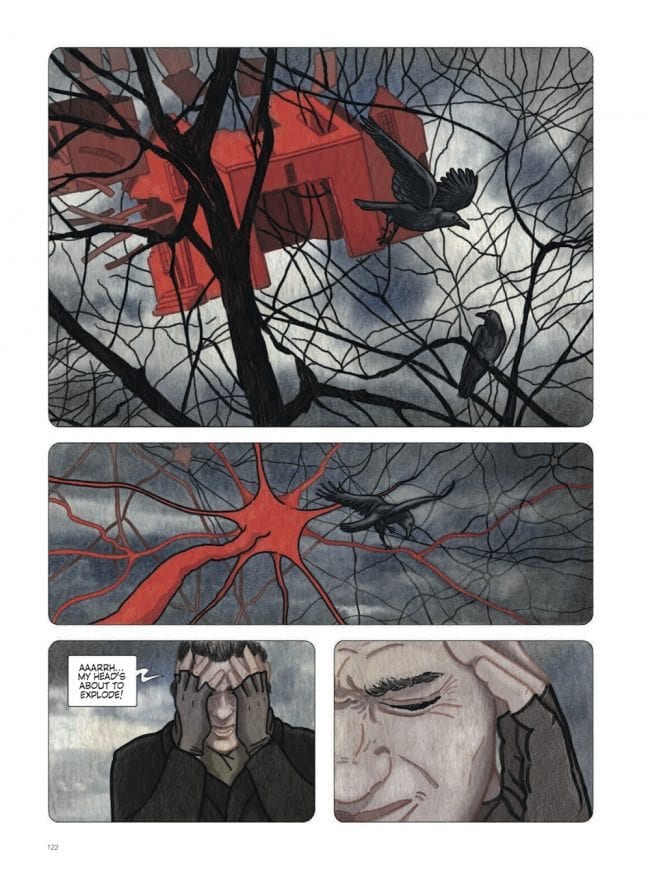 I wanted to ask about one of your previous books which I don’t think has been published in the US but I think a lot of American readers might find of interest, Le 11e Jour. Could you talk a little about the book?

I was in Manhattan September 11, 2001. I had just visited the World Trade Center the day before. In this book, I relate my September 11 with all the trauma that goes with it. It’s a very personal look into that day until my departure a few days later. It’s a modest and specific comic, far from the paralyzing imagery TV fed us. A specific vision full of nuances with, at its base, a personal mourning crossing the trajectory of a planetary tragedy.

You mentioned that you draw on a tablet. When did you switch from paper to a tablet and how do you think it’s changed your work?

It happened progressively over five years. I started only doing colors on the tablet with the graphic novel “Sorcellerie et Dependance” (Sorcery & Dependency) then on “N’Embrassez pas Qui Vous Voulez” (Don’t Kiss Anyone You Want). I assembled the story board and colors for “La Lesbienne Invisible” (The Invisible Lesbian).

Gould is the first book done entirely on the tablet (Wacom and now iPad pro) where I can at any time change a drawing or a full page layout almost at the speed of thought. That way I can remain open to the end to new ideas which can improve my work. A little like Gould, who was totally in control, but also liked to be surrounded with machines to attain his goals. 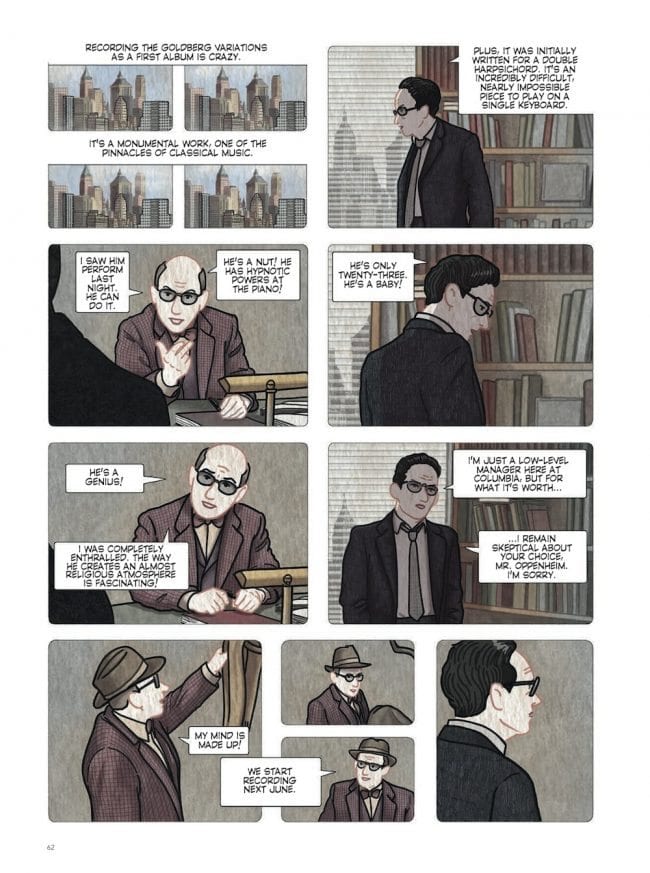 How has the response to the book been? Have you heard from people who knew Gould?

Bruno Monsaingeon, a close friend to Gould, one of the great experts, complimented me on my work and added that, knowing Gould, he would have appreciated it. It’s the best compliment one could make me. Otherwise the reception has been remarkable. I didn’t expect so much good press. It’s a book on its own, I am quite happy it got so much attention and critical praise. All along the creation of this book I applied myself to show Glenn Gould as a human being, fragile, accessible, I followed my instinct. I am not a music aficionado, nor a sound technician, nor a musicologist and maybe that’s why this graphic novel is accessible and piques people’s curiosity. With people I encountered during signing sessions. I saw a lot of people buying for friends amateurs of Gould but not comics readers. There’s also readers of comics who discovered Gould through my comic. I’m happy it’s worked both ways.

What are you working on now? What’s your next project?

I love Canada–its national parks, the Canadians, their traditions, cultures. It’s a country that touches me and that’s why I continue my trip there working right now on the painter Tom Thomson. I discovered this artist while doing research for my book on Gould in Ontario. I’m approaching painting in front of nature this time, it’s ambitious!

I also have a planned book that’s lighter for kids which should come out in 2017. The two heroes are a Boston Terrier and a little girl–to be continued.

And I have an exhibit of paintings to mount in 2017

I have to ask, do you have a favorite Gould recording?

There are a lot but if I had to retain one this morning it would be the intermezzo op. 18 #2 by Brahms. 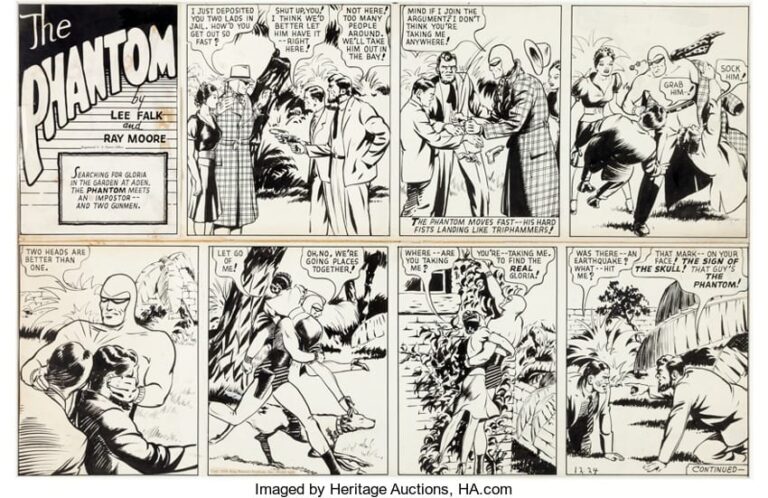 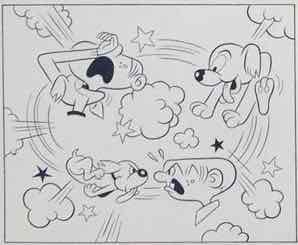 The Groin Vaults of Branson