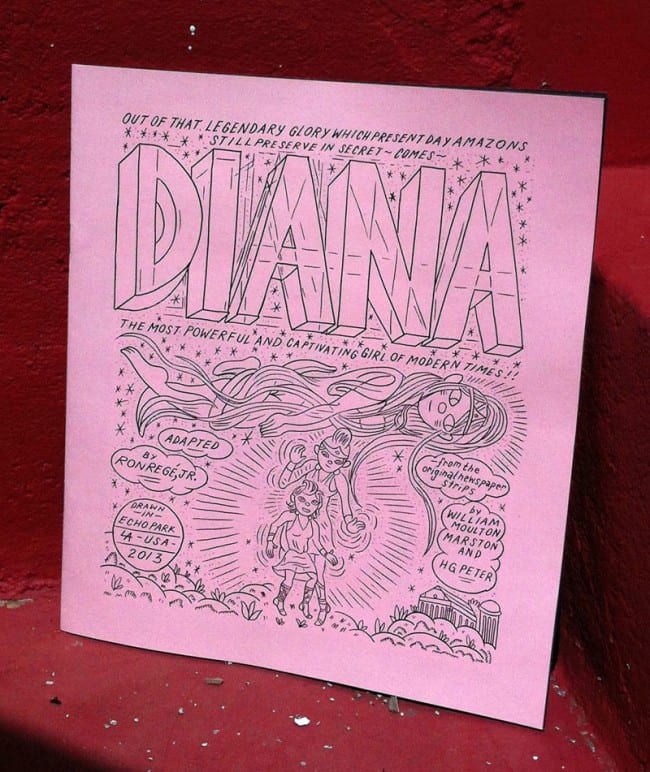 Ron Regé Jr recently self-published—and promptly sold out of—far and away the best comic I've read this year: Diana. This xeroxed 28-page masterpiece is an adaption of the Wonder Woman origin story. Regé, the author of The Cartoon Utopia, Skibber Bee Bye, and that other perfect comic book, Boys (FYI: Other perfect comic books include: Supermonster #14, Twisted Sisters 1, Despair, Bogeyman #1, Eightball #22, etc, etc.), manages to strip away everything but the bare, ecstatic bones of Wonder Woman and make a compelling new comic, grounded in history but newly energized and politically astute. As per usual, Regé's airy, linear style is at once approachable and then untouchably perfect. The closest cartoonists I can think of to compare with with Ron would be some bizarre mix of George Herriman and Crockett Johnson -- beautiful, intelligent, and humanist. I interviewed Ron back in 2002 for TCJ, and Jay Babcock interviewed him last year. Ron is a fucking national treasure.

Dan Nadel: Why Wonder Woman? Can we separate the accumulated half century of muck around the "property" from the story you tell?

Ron Regé, Jr.: The goal of Alchemy is to "separate the subtle from the gross, cautiously and judiciously," so I suppose so! Alchemy is all about the effort of digging through the dung heap, to discover and create beauty from chaos. Yeah, that's what I'm up to!

I doubt that would be your first question if I had drawn Superman, that's why? It's all about the goddess. If I think of people I've known who are "fans" of her, they tend to appreciate her more as a female symbol, or icon, as opposed to a character in any specific set of stories. They aren't necessarily comic fans. In a sweeping glance, it is easy to see that the character has been used as a blank slate for hundreds of artists, who make her into anything they see fit. It's a pretty stark comment on how our culture looks at women, but it's also a glance at the parthenogenic mother goddess of antiquity. The opposite of the Patriarchy we live in. The woman who recreates herself and her progeny without influence of "The Father." 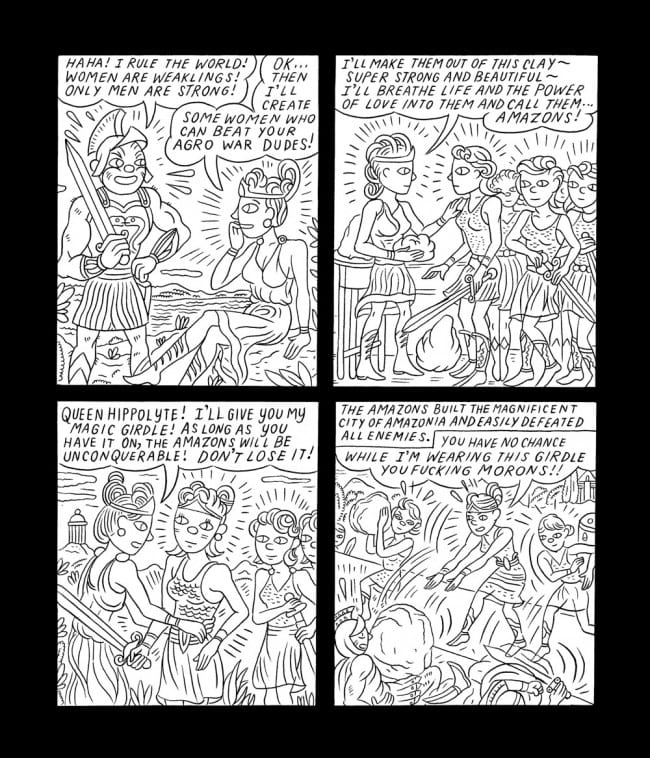 In my exploration of the misfits and freaks of history that comprised much of The Cartoon Utopia, I had originally wanted to include the Marstons, as the whole bondage/plural marriage/lie detector aspect of their story was something I hadn't heard of until recently. It changed my whole outlook on her as modern character. The Greek myth part reminded me of things I was reading in books like The Secret Teachings of All Ages.

It didn't make it into the book, and so I still had the idea kicking around in my head. I'd been looking for an exercise in adapting an existing comic, and I also felt like drawing ladies for a while. The first part is this funny Greek myth about a magic girdle, and the second half is about this crazy princess who is totally self obsessed and out of control. 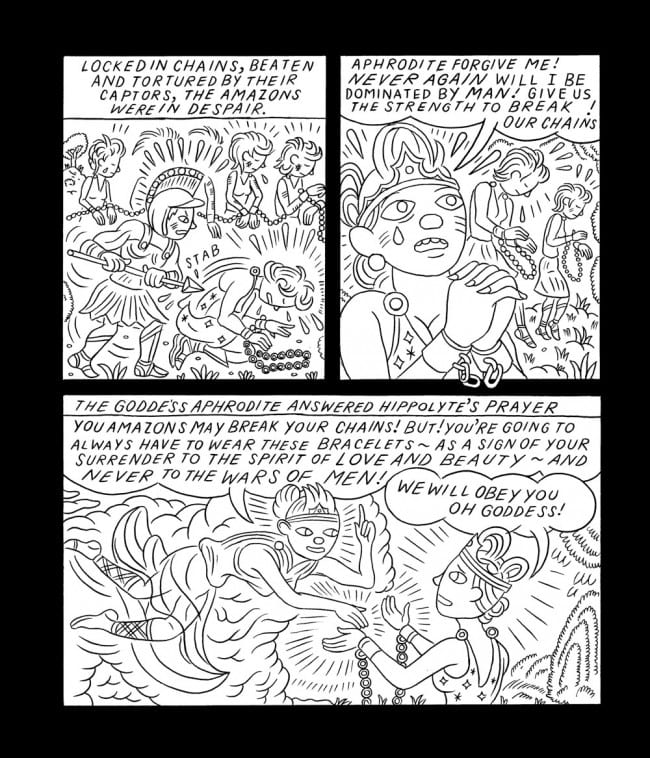 Nerd question: You specify it's adapted from comic strips? Where/what?

In The Complete History book by Les Daniels & Chip Kidd, there are some reproductions of tear sheets for daily newspaper strips. I was already toying with the idea of doing the story, and was working from the first issue of the comic book when I noticed them. Each page of Diana is from a four-panel daily strip. I found it easier to work with than the comic book, as I tend to create comics within a strict grid.

I'm not saying it's impossible, but besides the photos of these tear sheets, it doesn't seem like these dailies are easy to find. I don't think they've been collected or reproduced? I'm supposed to believe that these comics are worthless, whereas stories of the man/god and the dark vigilante are inherently more valuable than… okay, well, they are insane pulp bondage comics with a sorority of sadistic coeds including a candy-gobbling fat girl, and crazy racist WWII stereotypes, but they were written by this wild psychologist dude & his wife! There's all his crazy stuff in them! He invented the polygraph! 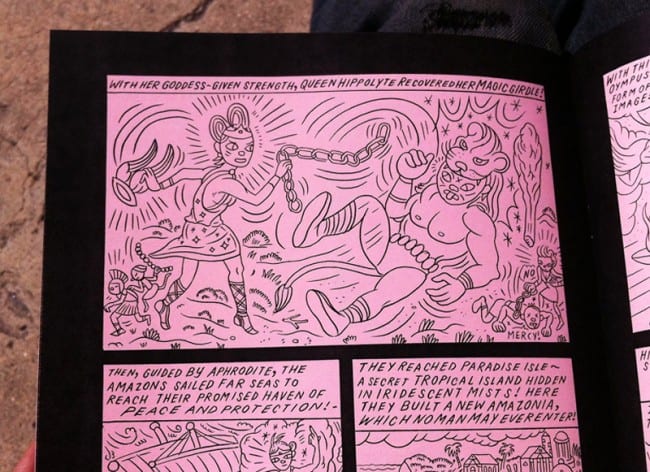 You wrote that you considered various publishing options. Like what?

I've been gabbing for a few years to my friends about doing this. Tom Devlin & Marc Bell knew I had started doing some pages, and had stalled on it, so they tricked me into finishing by saying they would "publish" it. It was classic Devlin, a good trick! Devlin & Bell minicomics publishers? Yeah! But when the time came, I realized that they had the same idea as me, to find somebody with a riso that was doing small-press stuff, and get them to do it. I had already considered that. Some publishers are doing comics again, and perhaps doing a one-shot with somebody would be fun? This was all spinning in my head when I realized that I could email a pdf to the family-run xerox shop a couple blocks from my house. Duh. It doesn't make sense for me to print something in the thousands right now when I have a few hundred pretty dedicated fans. I think I'm going to do more of it. I'm half done with a Madame Blavatsky comic, Cosmogenesis, which will be illustrated snippets from The Secret Doctrine.

Huh? Comics in general? Hopeful or despondent in relation to what? My personal worldview doesn't really relate to those concepts, but I believe that comics continue to enter the vernacular in varied ways. All kinds of people are creating comics about many different subjects, from a myriad of perspectives. Comics aren't just one thing anymore at all. 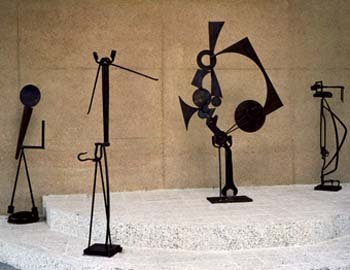 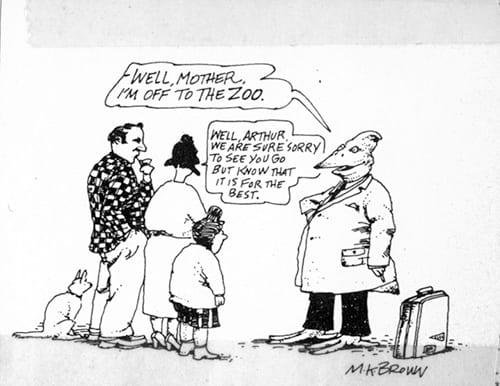 Off to the Zoo