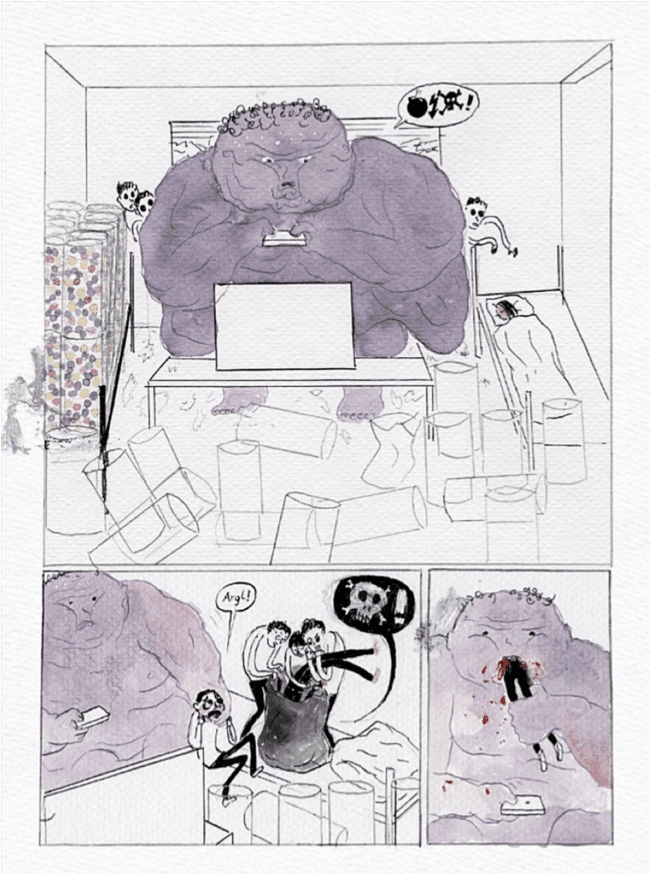 There's a shift in the visual presentation of Renée French's serial Baby Bjornstrand when its sixth chapter arrives: French's protagonists suddenly leave the usual two-dimensionality of comics behind and start acting in front of something that looks like a tiny model theatre. It's as if to ensure the reader that the story French's telling is real by modeling environment, reifying the whole setting, thus enabling her to address more complicated truths in an obviously imagined setting.

Serving as a model was also a point brought up while I was talking to dessinatrices Émilie Plateau from France and Germany's Jul Gordon during an exhibition of their creative work, which wasn't limited to the showing of drawings alone. After years of publishing fanzines – Gordon with the Tiny Masters bunch consisting of the likes of Anna Haifisch or G.W. Duncanson, Plateau with the collective Nos Restes founded by Belgium's conscientious objector to mainstream comics Jérôme Puigros-Puigener – both now share first-time releases of their comics in hardback editions. You can read this as another manifestation in terms of reification by emerging from the world of self-made zines and their fleeting nature. 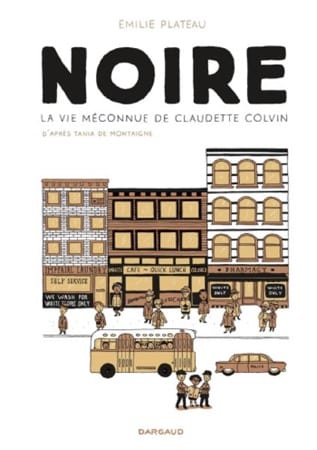 The small show was held in a gallery in Bremen called Raum 404, which appeared to be a former plumbery and thus appeared very suitable to its world-building character because of its whole DIY atmosphere, filling two large adjacent spaces, both painted in white.

The first of the two rooms was inhabited by a presentation of original artwork and self-made cardboard models from Émilie Plateau's recently published Noire, an adaptation of Tania de Montaigne's biography of civil-rights pioneer Claudette Colvin.

The second room was fully furnished not only with drawings by Jul Gordon, but also with textile works reviving themes from several comics she had done over the last few years. Prominently featured were Franco-Belgian comics characters like Tintin or Astérix-buddy Obélix in rather unfamiliar situations.

Among those exhibits provided by Gordon was Le Parc, which in its printed form – quite uncommonly for an artist originating from Germany – is only available in French, via Editions NA. 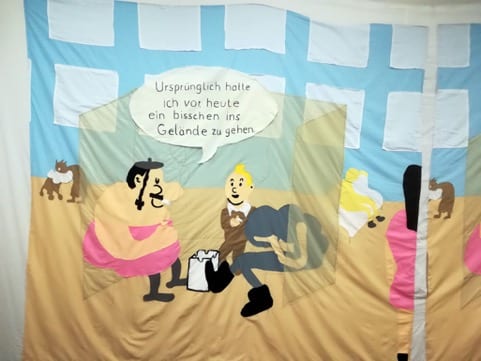 However, Gordon's long-form debut Le Parc is, as she vigorously insisted, based very loosely on Richard Strauss's comic opera Der Rosenkavalier. It also spawned cardboard models, though during the comic's creation and not afterwards as in the case with Plateau's Noire.

Sadly, the scale modeling done for Le Parc wasn't displayed to the audience – so ensuring traceability in the process of creating comics in a rather unconventional way was missed out on by not juxtaposing model and final artwork or vice versa, since Plateau admitted to building these small and beautiful recreations mostly for her own amusement, after performing her duties at the drawing board. 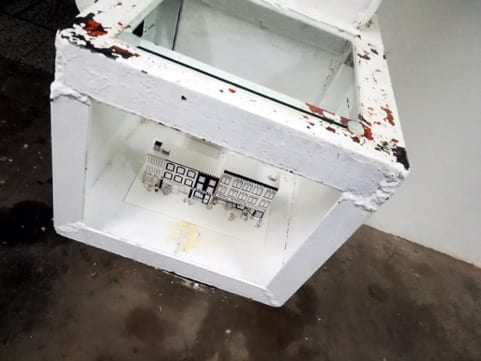 Gordon's approach, on the other hand, is due to the optimization of working processes. As she pointed out, it simply saves her time: “The making of a model representing the main venue for Le Parc takes roughly a day, and I can return to it any time I want, while coming up with different perspectives in my mind each and every time I'm working on the story rather turns out to be an exhausting effort when I'm primarily busy with musings on the further unfolding of separate storylines and the development of characters.”

In Le Parc – actually a stadium-like oval from a bird's-eye view, wherein Gordon follows various people who are sharing flats with each other – an abduction of a woman is taking place. It is initiated and conducted by men, for their own benefit.

Women are mainly used as a currency to pay for male purposes here, and while there are scenes that sear themselves into your genetic make-up, like a guy in a wheelchair shooting his guns into an empty swimming pool, there emerges a burning, all-engulfing anger from Gordon's vivid comics language. It's drawn in a stylistic mixture, with scrawly drawings of children and well-articulated line work, and it often shows brutal behavior directed toward men. Both modes are on display at their most violent in Gordon's excellent mini-comic Kontakt-Center, in which various men get stabbed in a type of blowing-off-steam murder bowl. 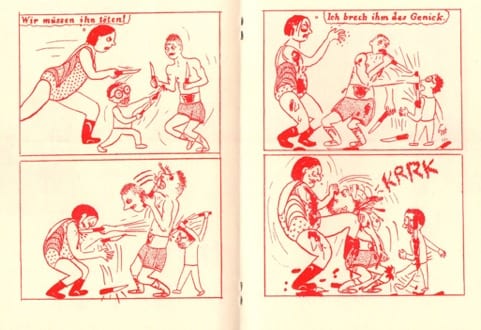 Because I ended up with a sketch showing myself with a knife in my head, I didn't inquire further where this love for the repetitive depiction of extreme violence actually originated from.

For Plateau, though, the impetus to adapt a biography of, as not only its title Noire clearly states, a black woman, arose from “being fed up with doing autobiographical stuff,” she told me. Along with that, she was also heavily frustrated with racism, sexism and, the rampant discrimination that follows both. It was then that she learned about French journalist Tania de Montaigne's search for an artist to adapt her book Noire, la vie méconnue de Claudette Colvin into a comic.

Montaigne had first asked Gilles Rochier, a cartoonist mainly focusing on portraying everyday life in the French suburbs, to adapt Noire, but he turned her down. Plateau took on the opportunity when her acquaintance Rochier approached her with the project, pitched it to major French publishing house Dargaud, and then landed a contract.

Dargaud's strategical reasons sale-wise are quite obvious in this: Plateau is a skilled artist whose landscape drawings show a precisely articulated poetic imagery through spaciousness and detailed pencil-work for recurrent motifs like foliage, and her way of depicting people reminds one of Jean-Jacques Sempé, well-known for creating Le petit Nicolas together with France's national treasure René Goscinny of Astérix fame – the former is also a huge inspiration to Plateau, next to Claire Bretécher. 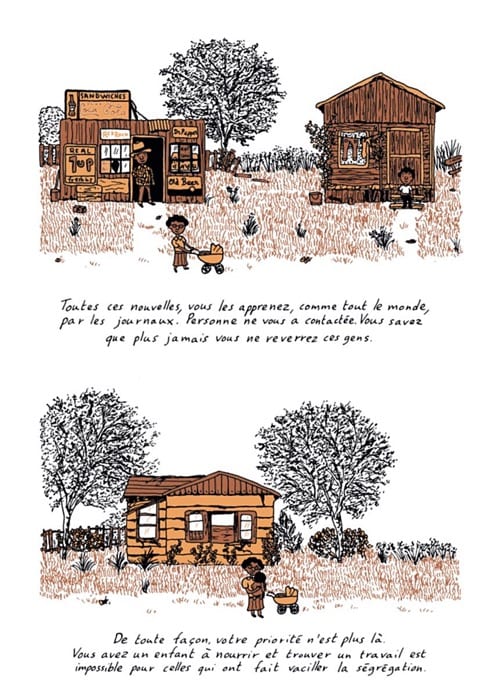 Plateau's use of brown shades, graded differently, subtly echoes hierarchies within the black community, which – among other concerns and prejudices – led to choosing Rosa Parks over Claudette Colvin when looking for a figurehead in the fight against segregation on Alabama buses. Contrasting a character based on Colvin with white open spaces in her work is another method Plateau uses in this vein.

Which brings us back to the question of appropriate role models: For Émilie Plateau the initial moment of wanting to become a dessinatrice occurred over discovering the work of Annie Goetzinger, for Jul Gordon it was Julie Doucet, they told me. So where does this leave us epistemologically?

It leaves us with a need for role models, and their visibility in seemingly open spaces that are just not free to enter for people of every gender or race. Exhibitions like the one in Raum 404 not only literally make room (Raum means room/space) for the presence of models by displaying those formed by creative power, they're also instruments of reification by way of a resilient environment.

You can download a PDF in German of Le Parc here, it's also Jul Gordon's internet presence.

Émilie Plateau's website is in French, it also links up to her publisher for Noire.

The exhibition is open until March, 23rd, the site is in German. 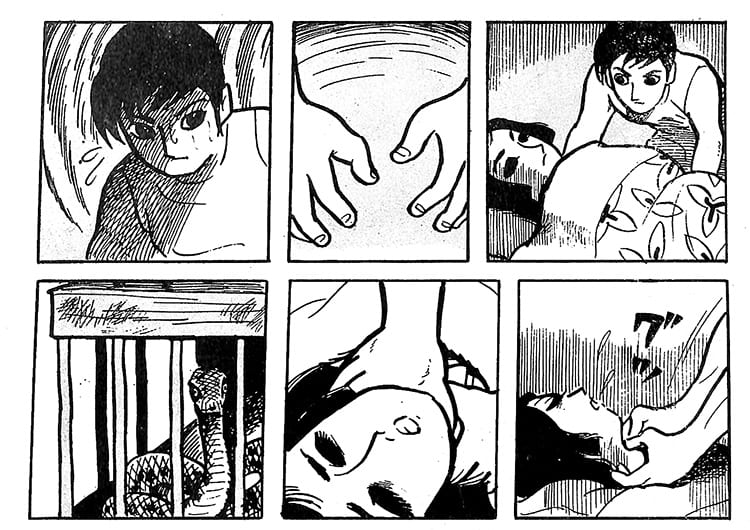 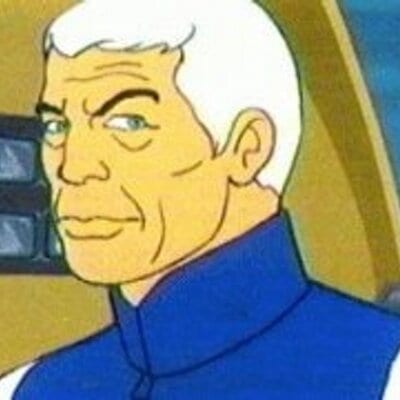