This week's scene report is brought to you by AdHouse Books brainiac, Chris Pitzer. AdHouse is one of the best publishers around - and Chris is one of the nicest guys around (a rare combination!). He lives in Richmond, Virginia and was kind enough to write up a report on the local comics goings-on there. Check it out below the new DeForge cartoon.

Speaking of Mr. DeForge - holy shit - I can't stop looking at his story in the new Thickness - I can't stop looking at the whole issue more precisely. It's a perfect object. Editor slash publisher Ryan Sands is a print genius. Students of the form will wanna pick this one up. It's a clinic on how to print your own magazine and make it look better than anything you could ever get from "professional" printers.
--------------
Top 5 Marvel Lay Offs of All Time

I think this past week's Marvel layoffs news is reflective of how corporate comics culture eats its young. Marvel doesn't give a fuck about supporting folks who make good comics for them - who work for them. Boycott Marvel!
---------------
MINI-COMICS LEGEND JOEL ORFF NOW AT WHATTHINGSDO WEBSITE!!
Stop the presses! One the biggest influences on my work in the early '90s was Joel Orff. He made slow moving "landscape comics" about working on riverboats or driving taxis or being trapped by winter. Orff self-published sincere, heartfelt comics that read like poetry - and WHATTHINGSDO has archived one of his best works here. Don't sleep on this unearthed gem from the '90s zine scene.

Also - Looking at WTD - I feel like it's a type of digital anthology that has been around for awhile - like since the dawn of websites - but now I look at it differently than before... in a good way. Maybe it's just that Jordan's a good designer and he makes it all look so new every time I look at it.
--------------
Don't forget! My CARTOONING CORRESPONDENCE COURSE starts the first week of November! Hurry up and apply - you can do it! I will make you a comics expert in eight weeks! Applications due this Friday the 28th!
---------------
INTERMISSION FUNNIES by MICHAEL DEFORGE 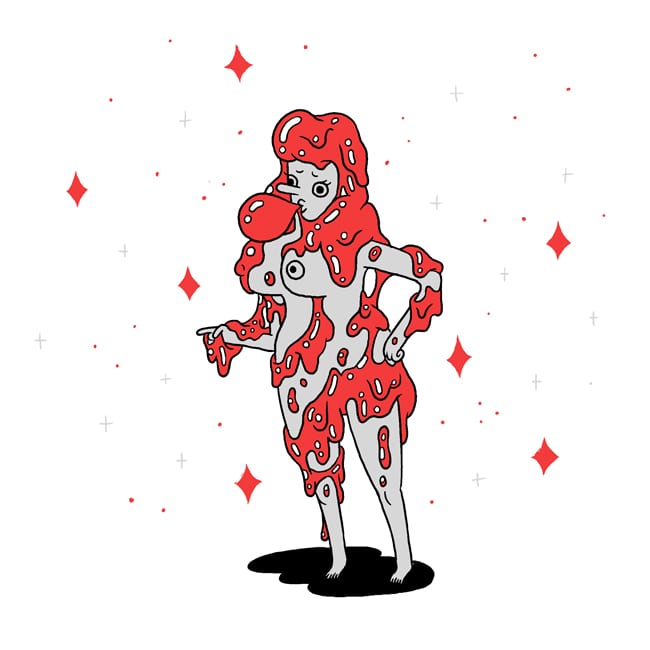 So the other day I get an email from good ol' Frankie asking me if I'd be interested in giving a "scene report" for my locality (Richmond, VA). 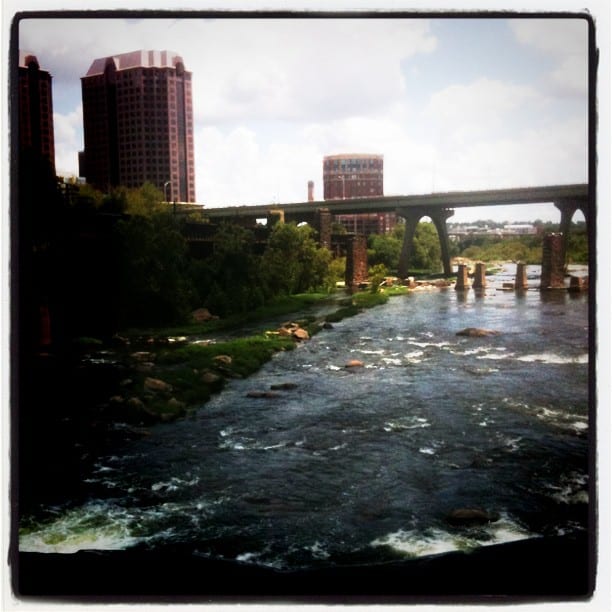 This is Frankie, so how could I not? I mean, I look at this as if him and let's say Jim Rugg or Tom Scioli or Dan Nadel were coming down to RVA to visit and this is what we'd do!

Now, I hate to admit it, but sometimes, my mindset is to NOT share this type of info. Because what if some of my favorite haunts become to crowded, picked over, or popular? Ugh! But again, THIS IS FRANKIE… and I just can't say no.

So, I guess I'd imagine those guys getting in around noonish, so we'd probably have to get a bite to eat. Since our first couple stops would be in and around the VCU (Virginia Commonwealth University) area, I think we'd hit The Black Sheep for a bite. And I do mean a bite. This place has become VERY popular over the last couple years, and has even been on at least one foodie show. One of the things they do is take your typical submarine and upscale it to a battleship. One weekend while my wife was away, I got one of these battleships and made it last into three meals. And the decor is to die for. Their menu changes throughout the year, so enjoy what you can. Also, save room for that fantastic peanut butter pie! 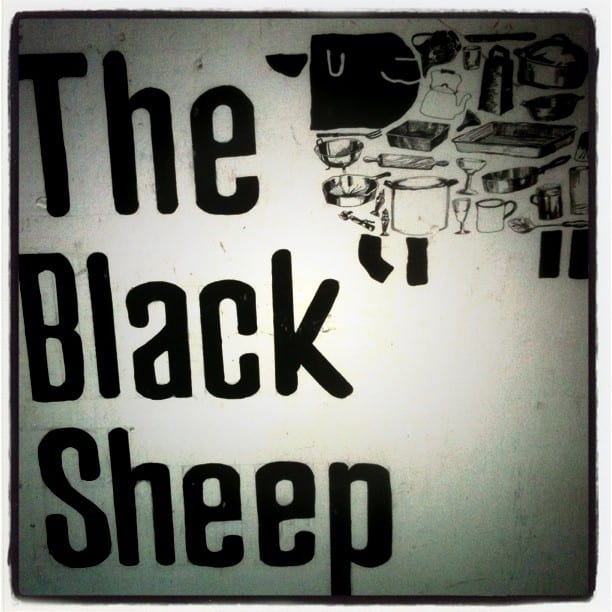 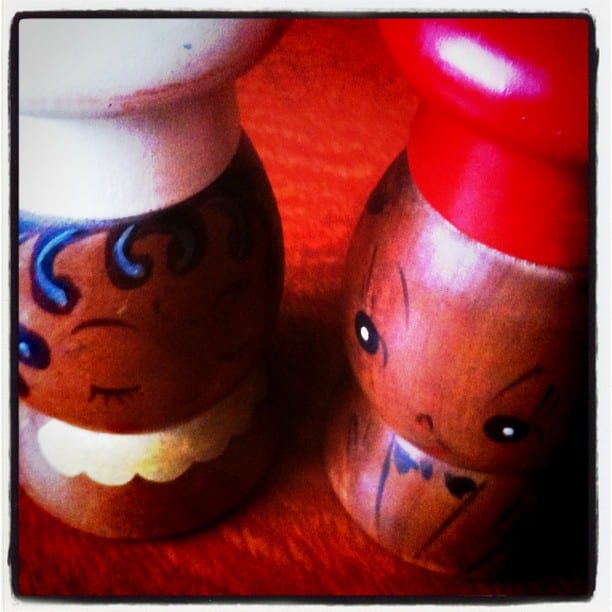 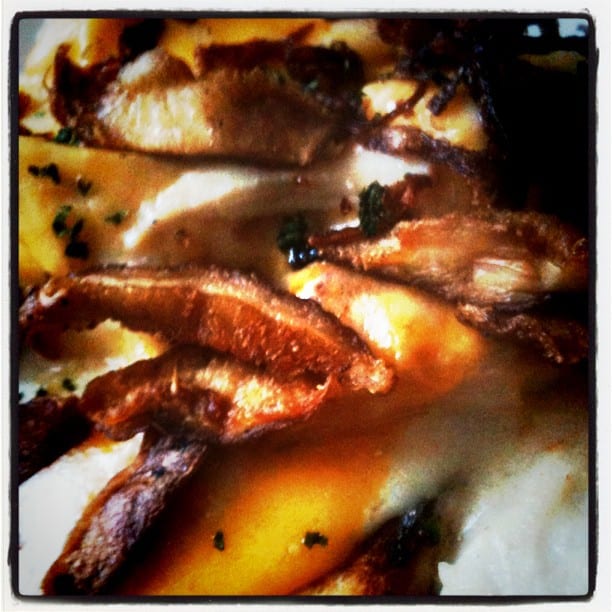 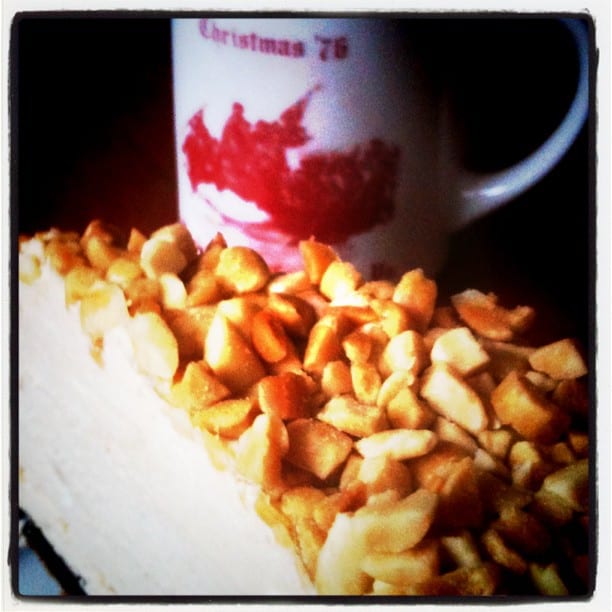 Now the next two places we'd hit are actually in walking distance to The Black Sheep, so if parking was OK, we'd probably just leave our car there and walk on up to Broad Street and hope that the Richmond Book Shop is open. 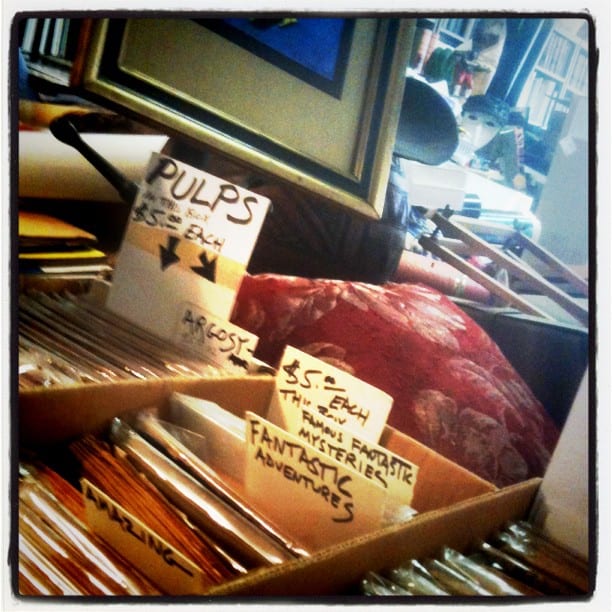 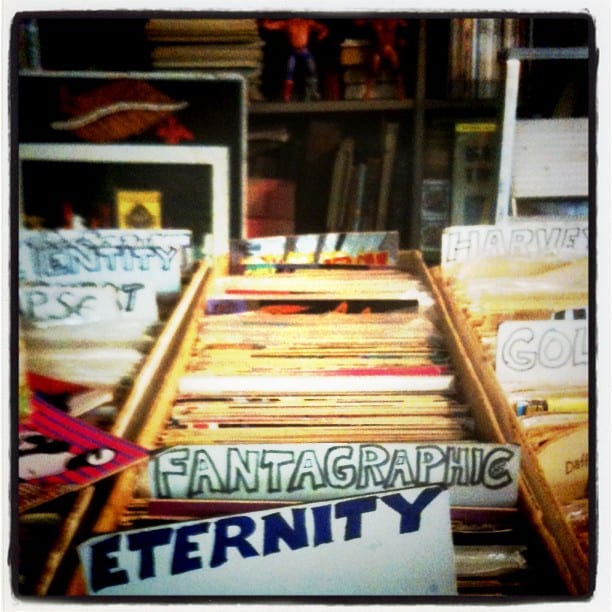 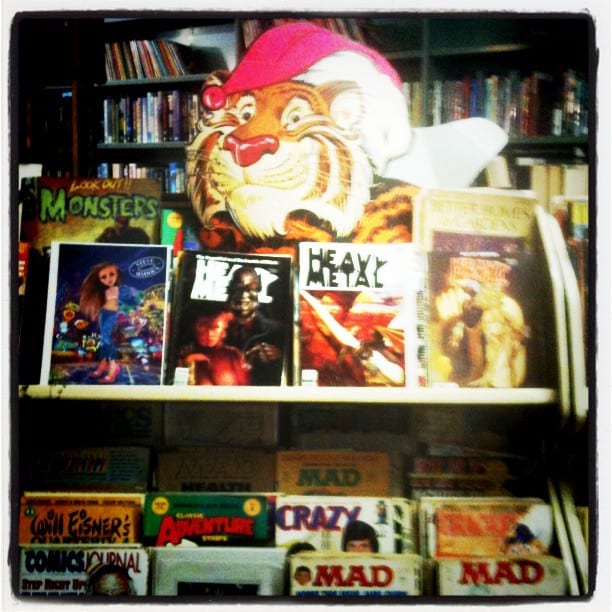 The Richmond Book Shop is one of those weird funky places that you NEVER know if they'll be open or not. Most of the times I drive by, they aren't. So, if you stumble upon them being open, it's like finding Shangri-La. It's run by Bob Lewis, who is himself sort of an "establishment" to the scene.

Before I "knew" Bob, I knew of his selling spots. I would covet the original Montgomer Flagg, Seth or Charles Vess illustration that he had in an antique store. Bob has had his pulse on comics since forever, so you can talk about the old days and wax nostalgic… But back to the shop!

The last time I was able to get into the store, I came away with the following: Eclipse Magazine #1 (oddly, the only one I was missing from my collection), something called The Mercenary (which I haven't read yet) and the first three volumes of Pluto… which I fell in love with! 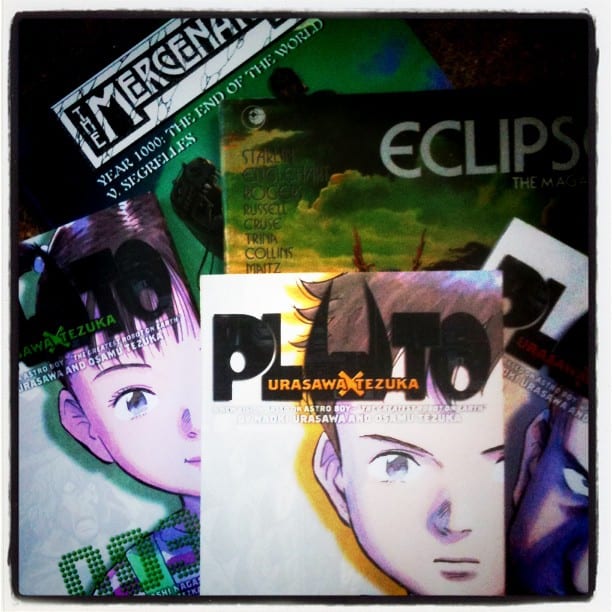 Here's a pic of Bob with Greg and Joel from the great DC-Area Big Planet shop. You can sort of see the shop in the background across the street. 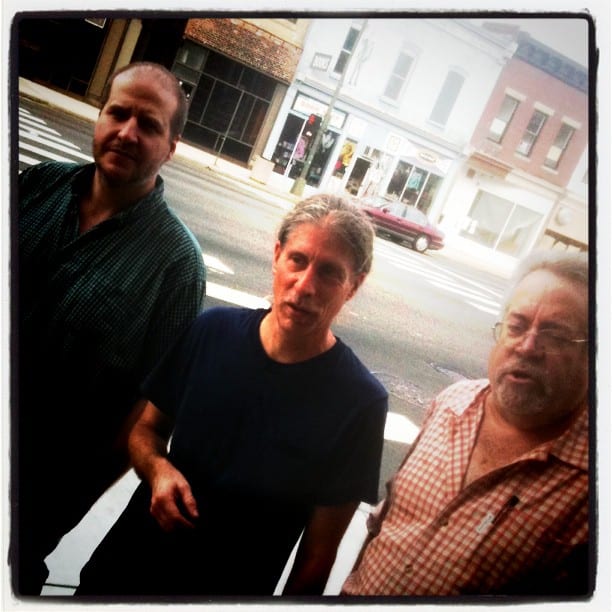 I took this photo as we were walking towards our second destination: Velocity Comics! 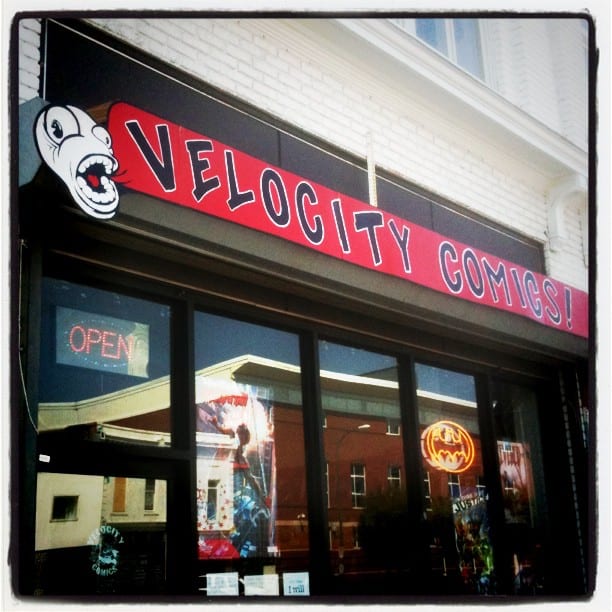 Of the few places I'll talk about in this report, Velocity is probably the biggest scene. It's just the best comic shop in Richmond (if not Virginia?), so a LOT of customers, creators, etc. stop by and peruse it's fine selection. Also, with it's proximity to VCU, it always seems to be hopping. Patrick Godfrey runs the store, and he does a great job of it. I like the fact that I'll more or less find anything I'm looking for, as well as enlighten me to some locally produced work. He also organizes get togethers with local creators that I wish I could attend… but it seems I'm always busy. 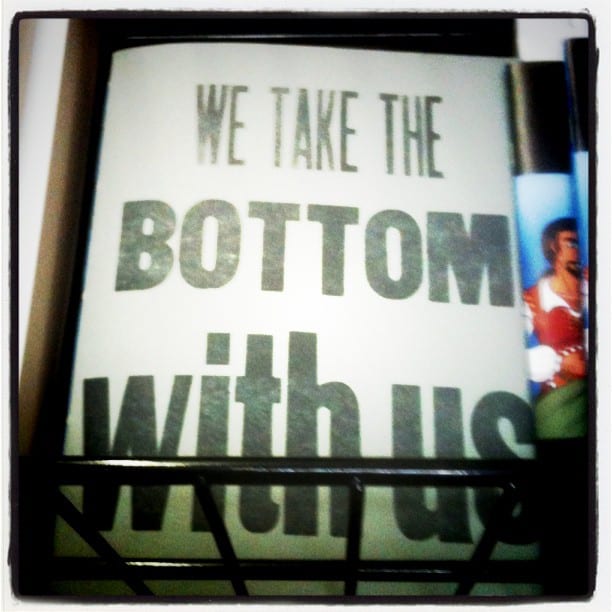 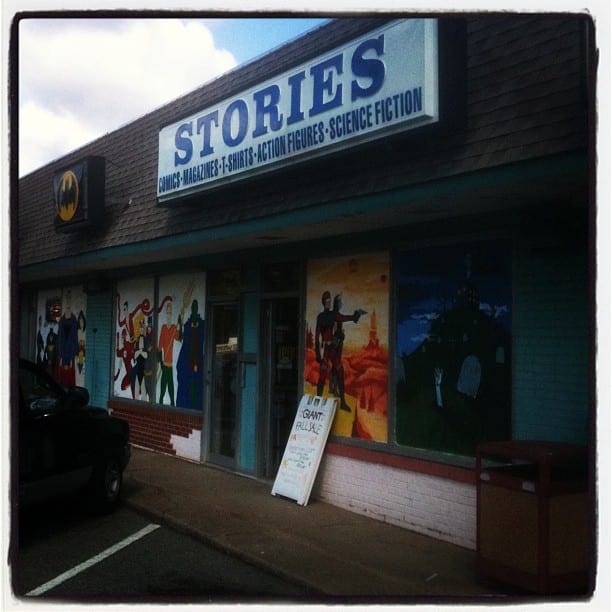 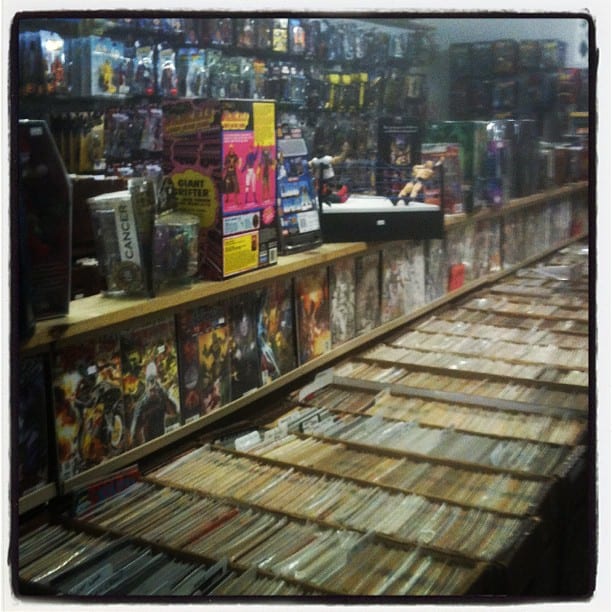 Stories actually has three locations. (I think at one point they had five?) But for the sake of this trip, I think we should hit the mothership… even though that means we have to cross the James to go to the Southside. Once there, the mural will let you know you've hit your destination.

Once inside, it's tough to really figure out what you want to look at first. They essentially have outgrown one store and become three in this one location. They really do seem to have everything. I tend to hit this shop when there's something old I'm looking for. Back issues, old graphic novels, toys… whatever. I found one of those Floyd Farlands at either this one or the West End location once. And I actually found a few mini-comics here one time too.

After all this exploring, I'm sure we're bound to be hungry, so then we'd hop back in the car and actually head back to where we just were. Two of my favorite RVA restaurants are in walking distance of Velocity Comics. Those establishments are Ipanema and Edo's Squid.

I'd probably hit Edo's first, but if the line was crazy long, we'd end up at Ipanema. Edo's is fantastic Italian & Seafood. Probably the best calamari and eggplant parmagian I have ever had. Ipanema is vegetarian, but still have a few meat entrees. Great bar and was used as a scene in the series Local by Brian Wood and Ryan Kelly. Heck, I guess we could hit both if we had it in us.

Now, before I close, I know that when Frankie was asking about a "scene report" he was asking about all the wonderful people who live in Richmond, and the fantastic stuff they do. Honestly, I don't make it out all that often. I'm old. I try, but sometimes I just can't get out there. But there are a LOT of great comic-associated peeps. 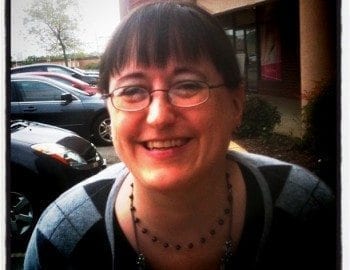 A few weeks back I was lucky enough to have lunch with Johanna Draper Carlson, who writes that fantastic blog Comics Worth Reading. The other day I picked up the local magazine RVA, and there was a feature on Julia Scott. (Julia just happened to with the Afrodisiac contest we had at Velocity Comics back on the tour.) And this weekend I'll probably see our pal Oura at the Richmond Zine Fest. He did do the poster, after all. (And there are MANY, MANY more people I could mention… like Rick Spears having his party for his new book release, or the fact I need to schedule a fall dinner with Tom De Haven… but down that road lies the names I will eventually forget…)

Well, I hope this helps convince some of you to visit Richmond, VA. It's a nice place. 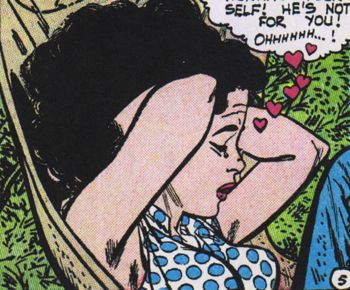 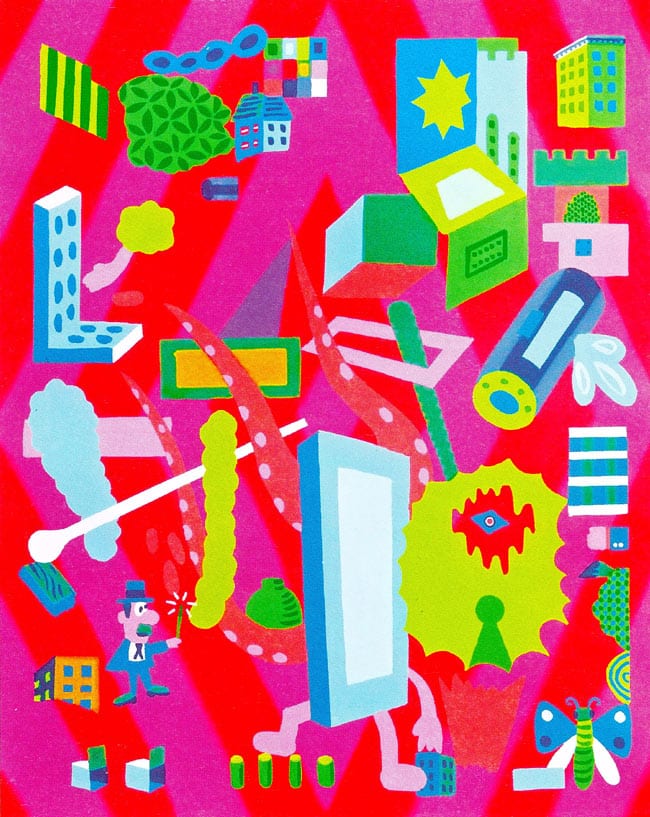 In The Land Unknown with Gary Panter