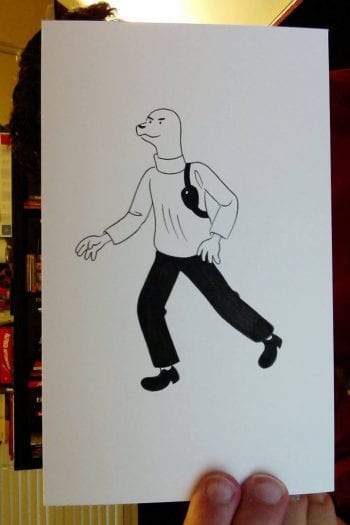 The Comics Journal: How many of these post-Facebook conversations have you had at this point, online and off? Do you have a stock response prepared?

Rich Tommaso:That's hard to say. I engaged in most of the threads within my initial thread, but on FB about 70 people shared the post and probably close to 30 people talking about it with me. I received a half dozen messages from retailers who reached out to me in support of the book. Every time I go to a local comic shop lately, it's the first thing everyone in the place asks me about.

TCJ: Do you get the sense that this experience has been productive at a level outside of the emotional one?

RT: I’m not sure, like I said, it did open up a conversation with retailers who ended up either ordering more copies of the book or because of the post, now knew about Spy Seal and decided to order copies of the series for the first time. There were also some messages from people in foreign countries who supported the book and even wanted access to the singles, but that it was not possible to get them where they lived—after which, a UK distributor stepped in and provided those folks, mostly who lived in Europe, with a way to order the issues. The internet is so murky though—it's hard to tell whether the level of support will actually save me from looking for a new job come November, December. Even if there were thousands of people rallying for support, it doesn’t mean they’ll all go out to buy the comic. So, come January—whether I can pick up bigger sales with the trade or not—isn’t really the big concern. The problem is what to do in two months time.

TCJ: It seemed that Spy Seal was able to garner a decent amount to advance attention, prior to your Facebook post....that this wasn’t a case of a book being ignored at the press/fan level, but of it struggling at the advance order level—which has a direct impact on your ability to generate income prior to the book reaching a trade collection.

RT: Exactly. I don't think it was unreasonable for me to think the numbers of initial orders would match somewhat those on She Wolf and Dark Corridor, both of which had ZERO promotion before their releases. And yes, those first two to three issues determine whether I can move forward financially with work the next project, because they provide me with about 6 to 8 months of income. 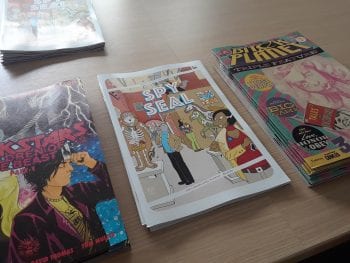 TCJ: Do you have some idea of how the sell-thru went at the retail level for She Wolf and Dark Corridor?

RT: She Wolf, series one had more of a solid, stable number because it was non-returnable. In the end, that series did just as well as my previous one, Dark Corridor, because after a year's time from its initial release, the DC single issues #1 through 3 were still being returned. It seems like She Wolf singles moved in stores much better than Dark Corridor. The returnable aspect of DC had some shops ordering 250 and up to 500 copies each, which seemed crazy to me, even without knowing anything about how big shops ordered on issue #1s of the Image brand. At the time, my experience came mostly from working for small publishers.

TCJ: One thing that i noticed with the response to your post was how often commenters went to direct market criticisms, and I can see very clearly how our discussion right now could go in that direction--a lack of consistent behavior from stores, no ability to communicate realistic numbers. But it seems that you've been consistent in NOT letting it turn into that too. 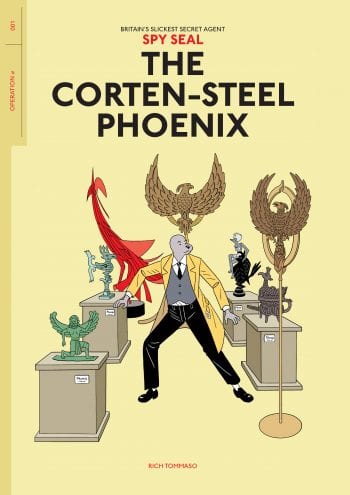 Yes and I've heard a lot of people say that a store owner won't order something if THEY don't like it, which I've personally experienced myself as a customer and this has never made sense to me. How does anyone know what someone wants to buy, walking into their store? I have this problem myself when buying comics in Atlanta. I’ll often have to drive from shop to shop, all over the city, looking for a book I can't find…and every time I ask about it, the shop keeper will usually say, “We never sell that stuff." or “Nobody buys that title”. Yet, there I stand, wanting to purchase it. My initial fear with Spy Seal was that the series would be an odd one at Image--a Tintin-like YA book. But I figured, every publisher has to start somewhere with offering new material they hadn't before hand. If they really thought the series wasn't for them, they wouldn't have agreed to publish it. Right now it's unclear as to why it sold under half the numbers of DC or SW. It could just be that retailers don’t think Image readers will go for it or maybe it’s just that sales are down across the board in the industry.

TCJ: Has Image ever published a serialized YA series?

RT: I know they took on Bone at one point, but I think that was a short stint. There are a couple of YA series' going now, like Moonstruck and Octopus Pie, but not much else from my knowledge. 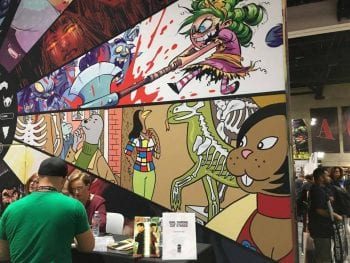 TCJ: What was done differently with the initial marketing and sales projections for Spy Seal? Did you work with a different team than you had for Dark Corridor and She Wolf?

RT: The initial push came from sketches, process art, and finished pages that I'd been posting over the past six months and the great response I was getting from those posts online. And Image also decided to do some extra promotion for it by making up a poster to send to supporting comic shops and displaying art for the series on their banner at SDCC. So, I think they had the same notion as I did that this had the potential to take off as well, because we didn't do anything like that for my first two books. I hate to even call my book YA, because I've been trying to write it--much like Tintin--to be an engaging book for anyone to read. I'm not a fan of much YA comics, but as an adult,  I still read Tintin.

TCJ: I don't think there's anything wrong with aiming for Tintin, and in a perfect world, it wouldn't be your job to call your book YA or anything else. Those are purely marketing and classification terms. On that note, do you feel like you've been equipped with some action-able steps to move forward?

RT: I had a plan for the Spy Seal trade from the very beginning—back in October, and once I saw those low numbers on the first single issue, I finally voiced this idea to Image, so we've set things in motion and if it all works out, hopefully the book will have a better chance to reach different markets outside of the comics—and possibly outside of the U.S. I have a few other ideas as well that could help with the trade's future business as well. They're both in the beginning stages, so I don't wanna really go into any real detail about it just yet. 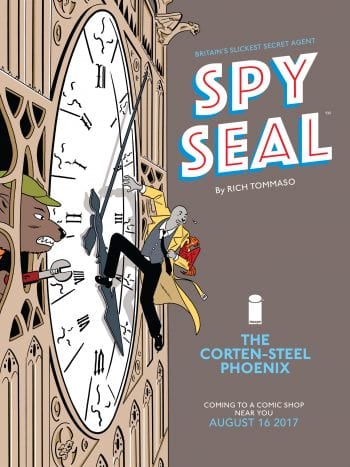 TCJ: Would you write it again? Do you feel a sense of obligation to be this open with fans? Not from a publisher, but from the online comics environment?

RT: It's dawning on me that it could eventually be dangerous for my career. If things went to pot on all things Spy Seal and it was no longer viable for me to work at Image, who's going to hire me after talking about my poor sales figures? If I had had someone to talk to [that night]—if that information hadn't been received at 8 pm on a Friday--I could've discussed these issues with Eric [Stephenson] at Image instead. So, my hope is that it DOES lead to something positive for the book's sales in the near future or else I've already put it out there that I'm a bad risk. I can't help it, but maybe that's my problem. I'm open about this stuff with readers and then I walk away thinking, well, that's not necessarily going to inspire confidence in my work with that person now. I may have to do the journey of go to Marvel for five years, write some great Punisher material, then go back...hopefully, I'm not too old for that long back and forth career scheme.

TCJ: Well, i think we've confirmed to some degree that what happens on the comics Internet doesn't always impact real life, so you could also be totally fine.

RT: Ha! Yeah, hopefully people who are too busy to even bother going on social media are completely unaware of my meltdown! 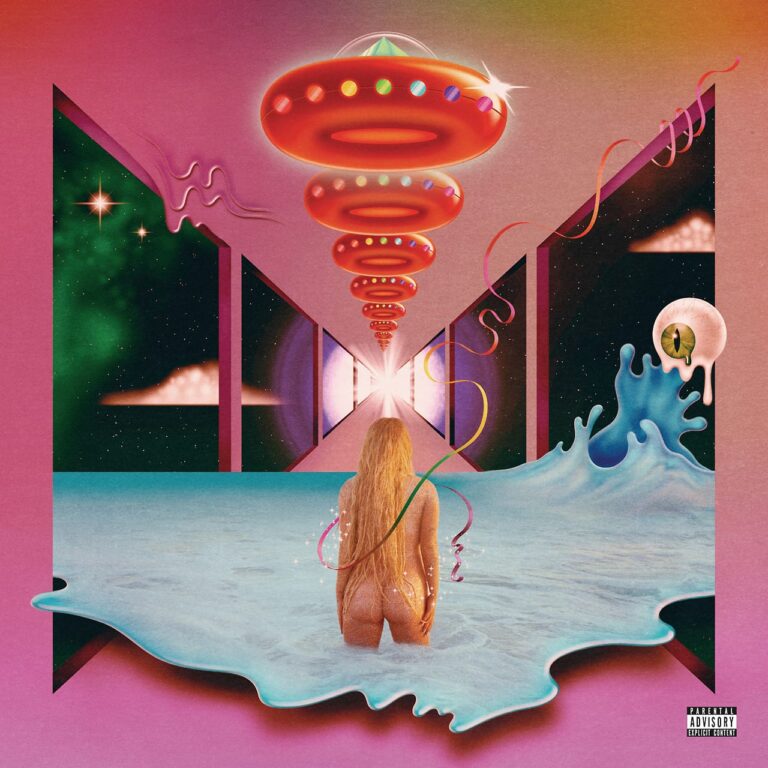 A Deeper Understanding Of Apostasy 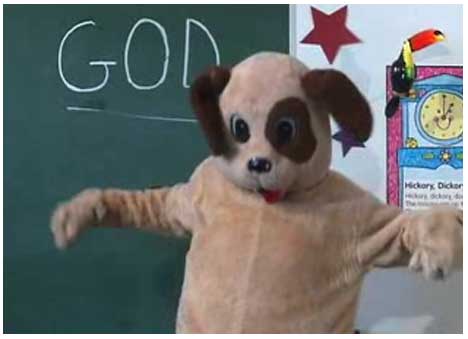 California, Stay Away From Here