This week, Melanie Gillman sets a record by being the first cartoonist to follow up one week of a Cartoonist's Diary with a second week. Here are Day Six and Day Seven.

Nicholas Burman is here, too, with an interview with the British comics writer Mary Talbot.

In your comics you've gone from writing about yourself (alongside a historical figure), a fictional figure, and a biography. What, if any, differences did you apply to the writing process when piecing these stories together? Were you asking yourself any ethical questions around portraying the story of Louise Michel, for example?

While I was working on what became Dotter of Her Father’s Eyes, I was moved by the tragedy of Lucia Joyce’s story and I was keen to write about that in some way. For a long time I saw my own little story solely as a means to explicate hers. It shocked me that Lucia seems to have been a kind of casualty of modernism. Her father is this stellar modernist figure, with ‘advanced’ views about marriage and so on, yet the Joyces had pretty bourgeois notions about women and these eventually crushed the life out of Lucia. It was only when I could see that my idea of presenting two parallel lives was working well that I finally overcame my diffidence about memoir writing. Once I started to work on the two interweaving plot lines I could see how it would work as a single story. Then I was completely comfortable with the memoir aspect. I did ponder the birth scene quite a lot before adding it, though. I had to do masses of research into Lucia’s life. The final section about her was painful to write. In fact, I found I was starting to well up with tears every time I read through that part. I took it as a good sign, as far as the book was concerned; if it affected me so much, then surely it would do something for readers. Writing about my own past was a different matter. Obviously it’s familiar to me and the most recent event recounted (my mother’s death) was thirty years ago. The next two books seemed more straightforward, presumably because they were far less personal. I do recall that, in the case of The Red Virgin, I had to think very carefully about how to represent the ghastly ‘Bloody Week’ massacre, to neither sensationalize nor downplay. I think I got the tone about right. Conversely, with Sally Heathcote: Suffragette I wanted to make a prison force-feeding scene as gruesome as possible, so that the reader would appreciate what an appalling procedure it was.

We also have Oliver Ristau's review of Zac Thompson and Arjuna Susini's The Replacer.

The Replacer is a comic book – or as Aftershock's bureau of public relation affairs calls it, a “64-Page Graphic Novella” – that deeply immerses the reader into the daily affairs evolving around a medical patient's history proceeding from a vascular cerebral incident. So the subhead placed beneath a cover that's imitating the outlook of an old VHS tape shouldn't read, “Home is where the horror is” but “People taking care of you is where the horror is.”

Its topic is basically similar to the recently released Dementia 21 by Shintaro Kago, who also visited the area of taking care of others, but for Kago the chosen subject matter of elderly care management offered an opportunity to stage a black comedy, not a journey through the monstrous challenges for one caught in the treadmill of continuous care – though sometimes grim truths can't be suppressed, hence Dementia 21's jungle war episode, in which protégés turn into perfidious booby traps.

Simmonds doesn’t usually show anyone her sketches. “A French journalist recently asked me what my motivation was,” she says, amused. “I just do it.” But she has recently returned to her archives in the lead-up to a retrospective of her work at the House of Illustration in King’s Cross. It will include her childhood creations, cartoon strips for The Guardian and illustrations from her children’s books such The Chocolate Wedding and Fred, which became an Oscar-nominated film.

She shows me how Bovery evolved from photos of Princess Diana, who Simmonds drew from all angles “to bring her to life”. Simmonds double-checked that all movements were realistic by looking in the mirror. “I rather liked the way Princess Di looked under her fringe, that gave me the idea for Gemma’s face,” she says.

I was considered “artistic” in elementary school. And I remember one day these folks came to our school to assess for artistic ability. I took some sort of “drawing test” and they concluded that I had no technical ability but was good as a freehand drawer. Being judged that early stuck with me and probably charted much of the course of my art career. I took an art class in high school and didn’t continue because I didn’t like my art teacher (she wasn’t particularly nice). I pretty much stopped drawing in high school and focused my attention on stage crew/musicals, sports, and playing music.

When I got to college, I took a studio foundation course at Brown, as well as screenwriting and some film classes. At the time, I wanted to make socio-cultural documentaries. I wanted to get into RISD courses because my school had an arrangement with them, but those classes were almost impossible to get into, so I never took any. During my studio foundation course though, we were required to go to a talk at RISD, where I saw Roz Chast speak. That was a game changer for me. Harvey Pekar also came to visit Brown to talk about the American Splendor movie. I met him and talked with him a bit too and he encouraged me to make comics. After those experiences, I started drawing again.

This comic is insane. In adapting a game about psychology, it’s about this simplified and transparent version of the same. Formally, it then becomes about depicting thought processes, essentially. Shaw has a long-time interest in comics and the language of depicting the invisible, so we get a more heightened version of that. From the first page, it’s working at a very high level to create a visual language to describe how perception works. There’s this sort of meta awareness of itself and what it’s doing and the need to explain that that then transfers to the reader. I texted multiple people while reading this comic to say how good it was, as I could barely believe it, could only understand it by communicating it to others.

[In the interests of disclosure, I should say that I contributed a short ancillary essay to this issue.] 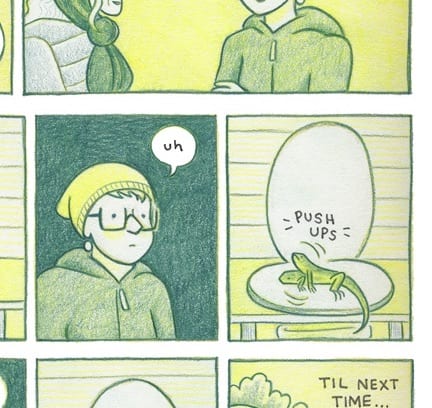 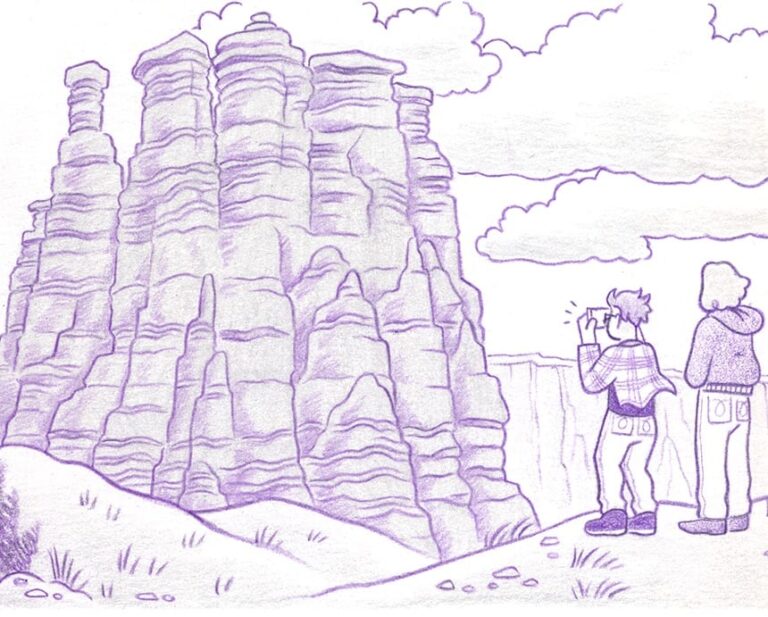