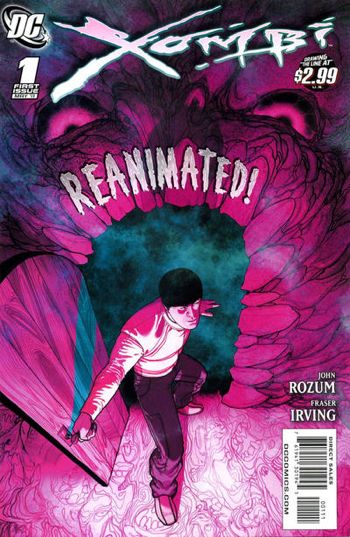 First and foremost, Xombi #1 is an object lesson in how modern mainstream comics can be good in almost every way, and still come out unsatisfying. There isn't much wrong with the book on paper. It's got a highly talented artist in Frazer Irving, and an underrated, rock-solid writer in John Rozum. It stars a character most readers are more or less unfamiliar with, which means its creators are working from the ground up rather than merely building new scaffolds around something. And it's a relaunch of a property that's never had a definitive, unmatchable run of issues but hasn't yet been beaten bloody with too many tries for one -- prime real estate in superhero comics.  The concept is even rather novel: not quite a superhero comic, it mines the same paranormal-investigator-with-uncanny-abilities vein that Mike Mignola's pulled so many riches from with Hellboy, chronicling a technologically enhanced slacker/scientist's collisions with the shuddery, psychedelic forces that lie beyond the pale.  In this issue, those forces manifest themselves as undead trick-or-treaters, malevolent light projections, and the shrunken-down inhabitants of dollhouse prisons. It's a bizarre reading of action comics that ends up with the hero not punching anything, but instead sticking a floor lamp into the air while covering his eyes — and the change of pace is quite refreshing.  Given the mainstream's current anemic state, it might be going too far to declare any new series' launch environment an auspicious one. But like I said, Xombi looks pretty good on paper.

It doesn't look too shabby between the covers, either, its pages heralding Irving's arrival at a fully formed version of the high-contrast, color-drenched photo-realism that's surfaced in his art recently. Black linework is used sparingly or not at all, popping up only in an outline here or a solid dark patch there, while swirling gradients of hot pink and silvery blue sculpt forms and dictate texture and contour. Irving's computer-drawn artwork is so fascinating in part because the sophistication of his digital tools has evolved as quickly as his actual drafting skill; technology that just a few years ago looked stretched to the limit by painting indistinct, smoky backgrounds and building simple, blocky forms can now drop glowing waves of color over the subtle curves and indentations of a perfect human figure, blanketing everything in naturalistic light patterns that come in unearthly hues.

Irving's art has become a seamless fusion of man and machine, and while this is represents a definite victory for craft (not to mention that it's extremely pretty to look at), there's something missing from the intricate, flawlessly rendered lighting and unerring deep focus of these panels. The element of friction, the awkwardness that came from Irving's imperfect incorporation of computer drawing into comics art has always been one of the most interesting aspects of his work—a silent current running through it, barely noticeable before it disappeared. The realistic subtlety Irving's capable of pulling from his software these days is certainly more impressive than the cruder work he was doing last decade, but I'm not sure it looks as good as the strange, abrupt version of Impressionism that his older comics were stuck to. Below, compare two Irving sequences of strange happenings in dark alleyways, the first from Xombi and the second from Robin #158, which is cover-dated March 2006 (that's the month one Jack Dorsey created Twitter, just so you have an idea of where the digital world was at the time): 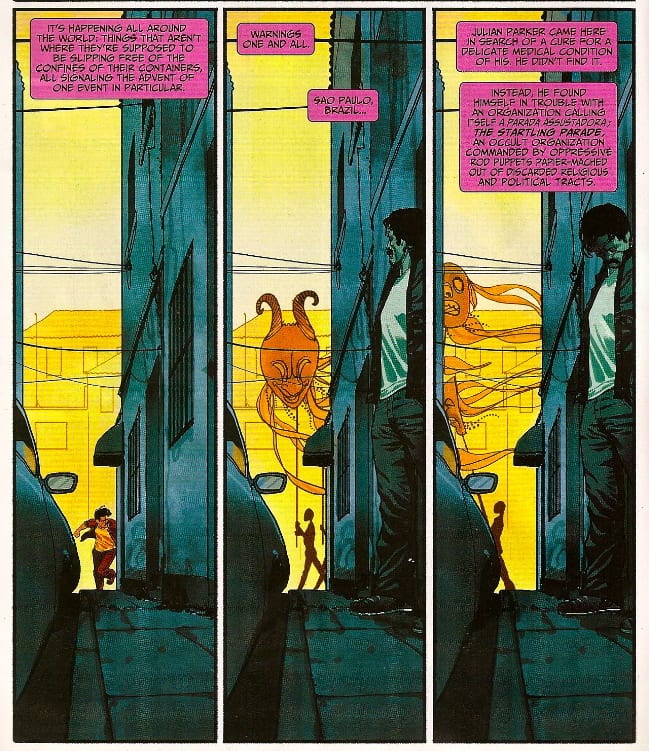 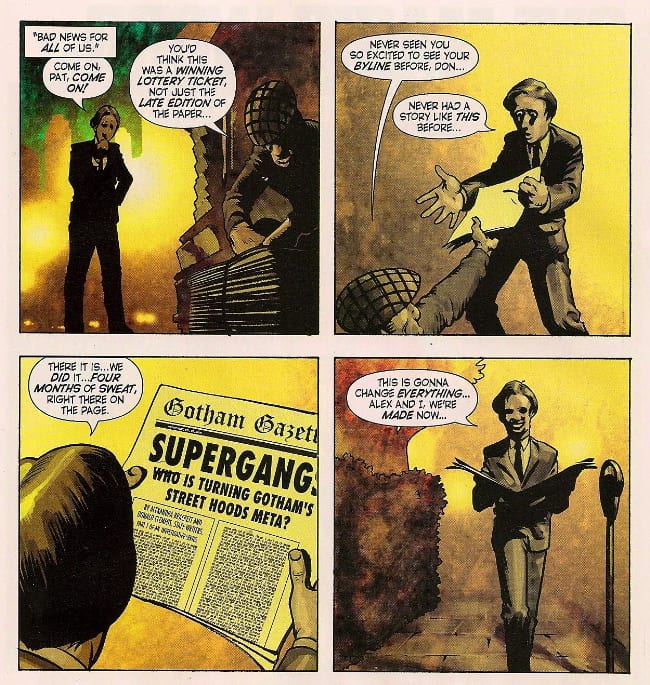 There's no denying that the Xombi sequence is the work of a more accomplished artist. The linework is surer and has a greater dynamic range, the color manages naturalism and pop in one fell swoop, and the environment is fully realized, its every element highly detailed and perfectly consistent from frame to frame.  By comparison, the Robin sequence looks off-balance, amateur. That said, I see more graphic power in the suffocating golden soup Irving drowns his earlier work in, computer color spread so thick it goes past mere depiction and becomes a living presence in the panels, floating right alongside the characters, vying with them for attention.  And I can't help being drawn further in by deep blacks and handmade marks than I am by perfect digital shadowing and drapery. What once was rough and choppy and surprising is now polished and smooth. And regularized. Where Irving's art has gained illustrative grace, it's lost some of its unrestrained visual smack, the sense that not only did nothing else in hero comics look like this, nothing else was capable of looking this odd.

I highly doubt that Irving's evolution toward illustrative sophistication, his pushing of digital comics art from base weirdness into naturalistic elegance, is at all mandated. He's a consummate craftsman, and to be quite honest this kind of evolution doesn't happen unless an artist is really picking at something. But Irving's abandonment of what was perhaps a more interesting style for something more realistic and technologically advanced is a strong parallel to the way of things at the two big corporate comics companies, where line-wide advancement and digital marketing strategies are trumping content in the press releases these days.

It's also a good lens to view the rest of Xombi through: this is an interesting, well-made comic that doesn't quite know when to stop itself. Rozum deftly avoids the first-issue trap of over-explaining what's going on, opting instead for the Grant Morrison mode of flinging out high-concept ideas like confetti and hoping readers will be swept along by the sheer speed and energy of things. To a point, it's a successful approach. Xombi certainly feels more densely packed and exciting than the average DC pamphlet, but the non sequitur plotting (the villain catches "semicolon cancer" from a book!) and oddball quips (the hero makes sure to tell us he doesn't have to urinate!) end up obstructing the sense of forward narrative flow through their sheer volume alone. That's fine, I guess -- these things never have much forward motion to them anyway, not when the next adventure is always right around the corner -- and make no mistake, Xombi is more interesting as both a read and an aesthetic object than most of the rest of its genre at the moment.

It just feels... blocked, somehow. Unnecessary callbacks to past (and out-of-print) continuity slow things to a crawl a few pages in. The cliffhanger hits just as things are getting interesting, not at a climax or twist.  Brendan McCarthy drew a great cover, but it's a variant edition that most people won't even know exists. The computer lettering font clashes with Irving's art. There's one easy explanation for all these flaws: this is a monthly comic published by a huge company with a line-wide standard to maintain, and that means things like back-story referencing, regular 22-page installments no matter what, collector-exclusive cover art, letters that ignore the aesthetic potential of their own craft.

This comic could have been a lot better -- so could they all. It's easy enough to ignore the limitations if you're used to them, and the vast majority of this book's audience is. Personally, I think I'm a little too far gone to get much out of this kind of comic, but there's no denying that it's a cut above as a piece of commercial craftsmanship. It's laudable on that level, and if you've never engaged with anything but comics that are intended as product first and art second (or can just forget that you have for ten minutes), it's top-of-the-line stuff.  Basically, Xombi is what it is, and that only becomes a problem when you step back and take it as part of an entire medium rather than its genre alone. It's a troubling thing to condemn a comic for existing as a certain type of entertainment -- especially when its creators are obviously doing their damnedest to make something of actual value -- but when tropes preclude enjoyment, it's just as hard to figure out what else to do. 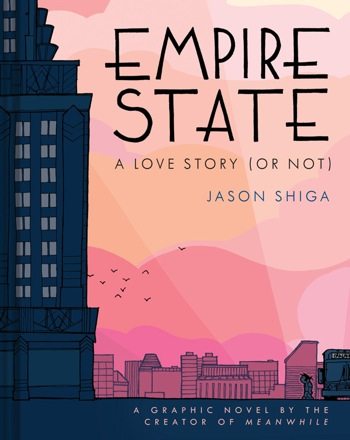 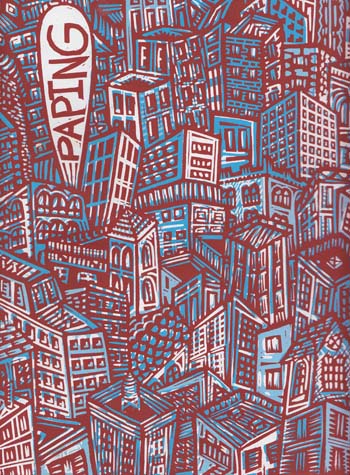