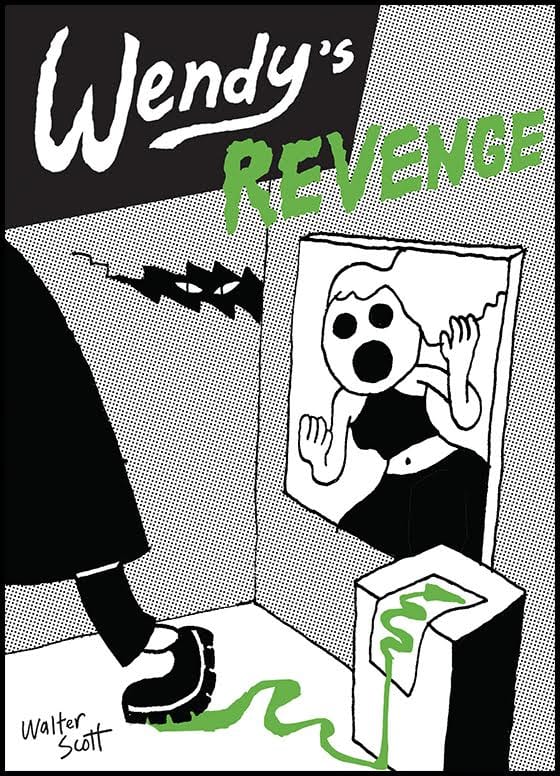 Walter Scott’s first book, Wendy (2014, Koyama Press), was an out-of-left-field surprise. Having never encountered the series before, I was delighted by Scott’s razor-sharp satire of the twenty-something art-hipster milieu, and the layers of truth and emotion that rise in bas-relief from the often absurd shenanigans of his artist heroine and her friends. For most of them, life consists of stumbling through a myriad of roommate-swaps, relationship drama, spur-of-the-moment hook-ups, grant-chasing, and professional jealousy, all interspersed with partying—lots of partying. “My life is a mess, like always,” Wendy says. The humor and poignancy of the story is that Wendy’s messes are generally self-inflicted.

Wendy’s Revenge expands upon the saga and heightens the absurdity of our heroine's adventures. As the book opens, Wendy moves briefly to Vancouver, where she takes part in a group show (this goes badly), goes to see a psychic, nabs a residency in Yokohama, and later travels to LA to attend a gallery opening and indulge in some stressful intrigue with some shady art people. Through it all, we are privy to her hopes, her dreams, and her ever-present anxieties. She truly suffers for her art, even if we don’t see her make any. Wendy spends so much of her time living The Artist’s Life that she doesn’t really have a lot of time to actually do art. At one point in the story, an acquaintance asks Wendy exactly what kind of art she creates. Wendy’s reply: “Uh—it's a secret.”

Wendy’s arty hipster-verse is comprised of a number of friends and frenemies, including her BFF Winona, an “indigenous multi-media performance artist;” Screamo, a narcissistic, ghost-faced gay dude with substance-abuse problems; and Vienna, a straight-shooting, no-nonsense type. Paloma, Wendy’s snake-tongued arch-nemesis, also shows up, generally to sabotage and humiliate Wendy. Not the least of Paloma’s crimes involves manipulating Wendy into wearing an embarrassing “late-90’s soul-funk revival look” to a gallery opening.

Scott also detours briefly into the lives of some guest stars via interstitial strips such as “Useless Urban Person,” which presents the title character in a viciously on-target satire of a certain kind of hipster we’ve all encountered: “I’m trying to write this thought down," he thinks to himself, "but I keep getting distracted by the comments on this picture I posted!” Scott loves poking holes in the bubbles of the self-absorbed. On that note, here’s Wendy to demonstrate: 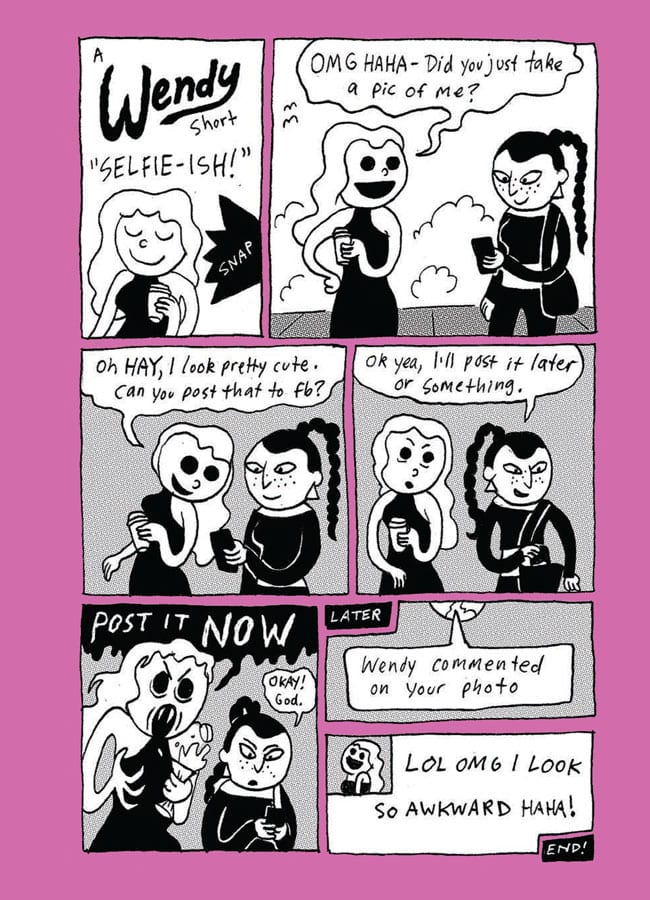 In addition to the social-media gags, which ring painfully true, the cast comically speaks in the shorthand of the internet millennial generation. Their communication is peppered with LOLs, OMGs, H8s, whtvrs & Srslys to an exaggerated degree (TBH I rly hope ppl don’t actually say “LOL” in real life). Paradoxically, they also are fluent in artspeak. Here’s an acquaintance named Leia, who is role-playing as the Star Wars Princess, discussing her hairstyle with Wendy and Winona:

Leia: George Lucas confused the origin of Alderaanian hair. He said “Female Zapatista resistance” when he really meant “Traditional Unmarried Zuni Woman.” But that’s FINE. Cuz I feel I have the agency to use these conflations of various historical misinterpretations to charge a self-determined reiteration of identity as an Alderaanian woman.

For the story section dealing with Wendy’s residency in Yokohama (originally published in Japan as a one-off zine), Scott presents the pages in Japanese on the left, with English translation on the right: 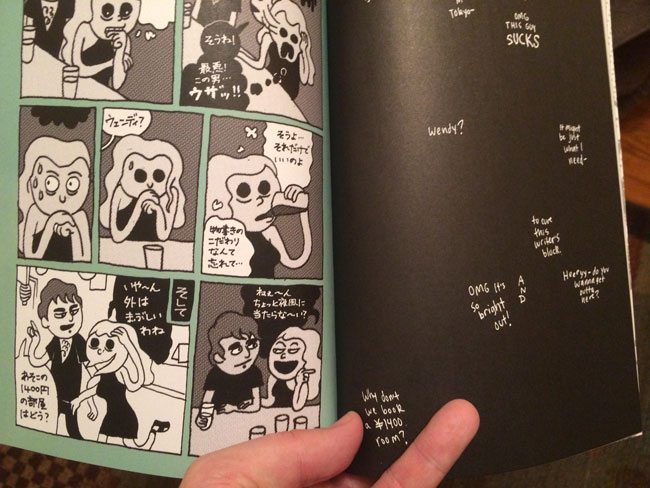 Though a novel experiment in presentation, a simple straightforward English translation on each page would have been easier to read, and taken up less space. As it is, this scheme detracted from my enjoyment of these otherwise engaging stories. (Interestingly, Wendy appears to have some cache in Japan, at least judging by this groovy bookshop sign in Yokohama.)

Scott’s line has an appealing laissez-faire vibe: a loose, un-manicured scrawl perfectly suited to limning the barely-controlled chaos of Wendy’s life. He conveys fraught situations economically: when his characters hear devastating news, are wracked with anxiety, or are hollowed out with a vicious hangover (often the case), their eyes and mouths become ghostlike, grimacing black holes of despair and/or exhaustion. It’s wonderfully effective (and very funny) cartooning. In addition to his operatically expressive drawings, Scott’s satire still manages to provoke genuine sympathy and pathos for his characters, as they strive to find their footing in a difficult profession at a notoriously confusing time of life. Even the generally nasty Paloma reveals herself to be as insecure as everyone else beneath her intimidating demeanor, while the “possibly sociopathic” Screamo explains himself to a therapist thusly: “I’m here to receive counseling about my alcohol and drug abuse, as well as my residual Catholic shame. Also my endless search for a father figure.” (To his credit, Screamo sums up his problems far more succinctly than anyone else seems able.)

With Wendy’s Revenge, Scott captures without mercy the foibles, pretensions, and gross misjudgments of his millennial cast, while never losing his grasp of their humanity or their believability. It's a wonderfully funny series, simultaneously caustic and heartfelt. 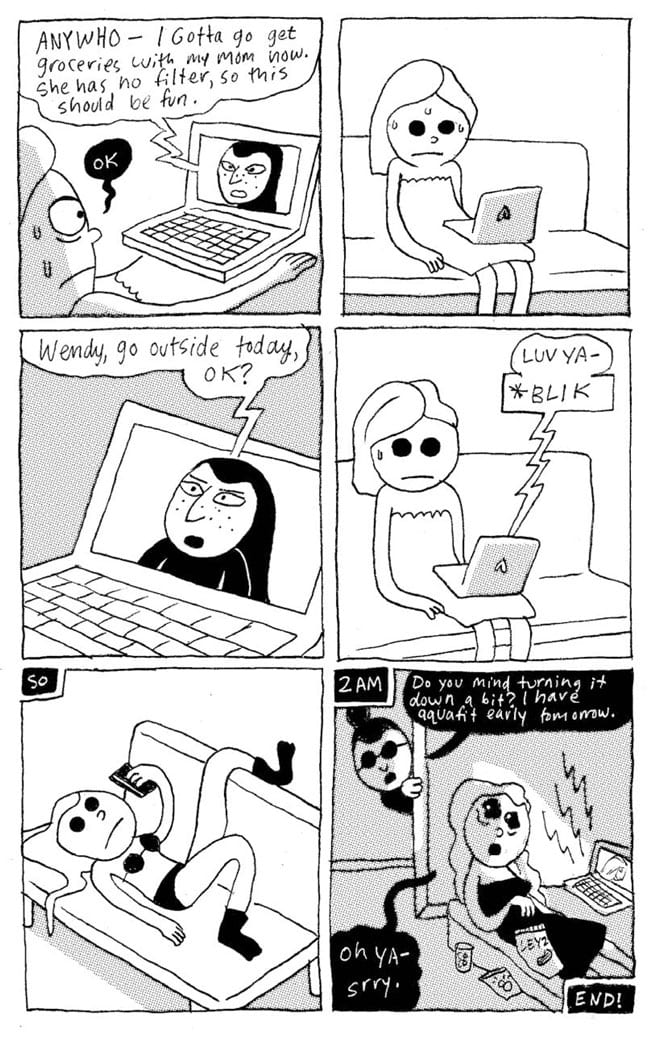 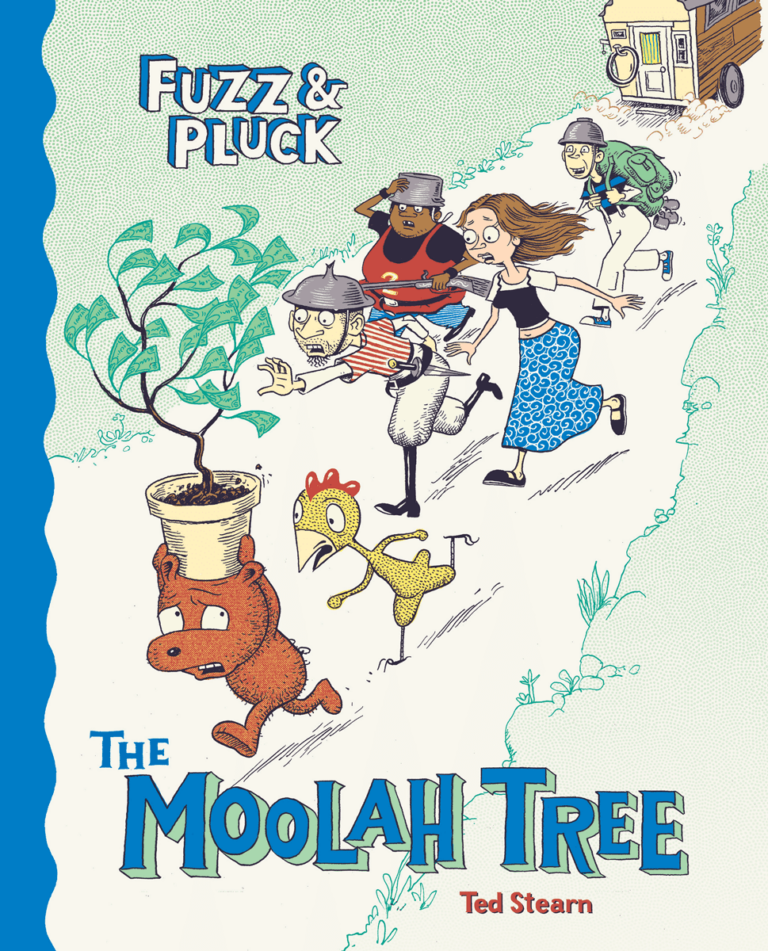 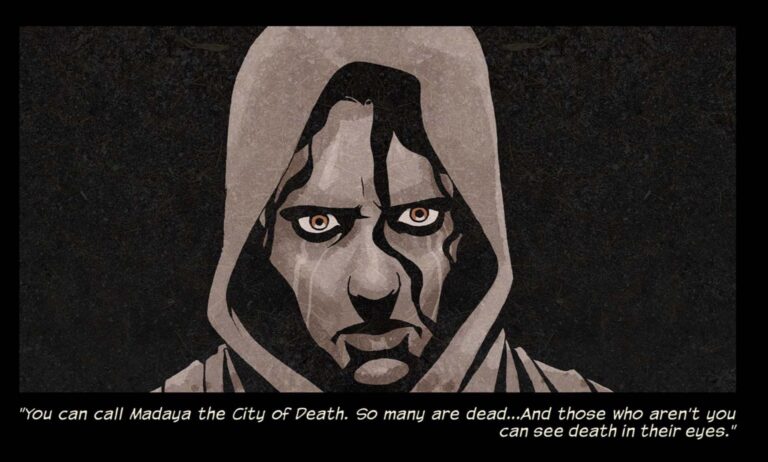