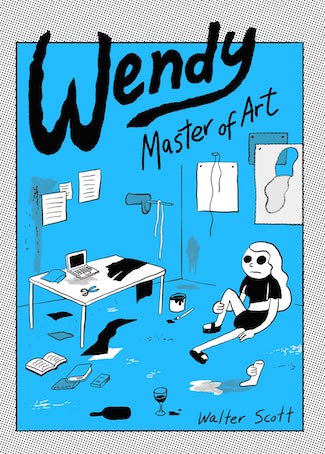 It was only recently, after “Generation Z” entered the lexicon, that I stopped responding negatively to the idea of being designated a “Millennial.” Generational demarcations that refer to everyone born within a twenty year span are bad enough for seeming arbitrary, the assignation of shared traits to everyone within an age group seems worse still. The idea that people born in the 1980s are less cynical and more sensitive than those born in the 1970s feels like an insult offered as general wisdom in order to prevent peers from engaging honestly with one another, but one learns to read past their aversion to a term to guess what it is meant to suggest. So, when back-of-the-book copy describes Wendy as “endlessly relatable,” on a journey from “Millennial art party-girl to successful artist,” I believe what it’s meant to connote is that the book presents a less cynical take on art school than “Art School Confidential,” to name a work made by a “Baby Boomer” once offered as speaking to and for “Generation X.”

With anything that pitches itself consciously towards the young (or, to be accurate, those who are self-conscious about the fact that they are increasingly Not That Young Anymore), there’s a certain degree of perceived-audience flattery. While the character of Wendy is flawed, perhaps “unlikable” by certain metrics, the book isn’t mean enough to be satire. I would categorize my reaction to these comics using such damnably faint praise as “nice,” “ok,” and “cute.” It looks like if Tom Hart drew with thicker markers, although it was likely drawn digitally, but reads more like a series of Hallmark cards for hipsters.

I like the drawing Walter Scott brings to the page, the noodle-limb body language characters are imbued with, even though he insists on a cartooning language for facial expressions that confuses me. It is so much his trademark that it's on the cover of both this book and the previous Wendy’s Revenge. It’s these eyes, filled in with solid blacks, and throughout the book's pages, this symbol is used so frequently as to become inscrutable due to overuse. Whatever feeling it’s meant to convey is apparently being felt by Wendy half the time. Initially it seems to suggest a mortification, and then maybe there’s a variation where a person makes an attempt to hide how they feel, as opposed to the transparent display suggested by an expressive googly eye. But it’s also just used constantly, and whatever effectiveness it once had to signal reaction as a punchline becomes muddled into a sort of ambient noise, like when a sense of humor stops functioning for the purpose of a joke to instead suggest a vague air of humorousness. 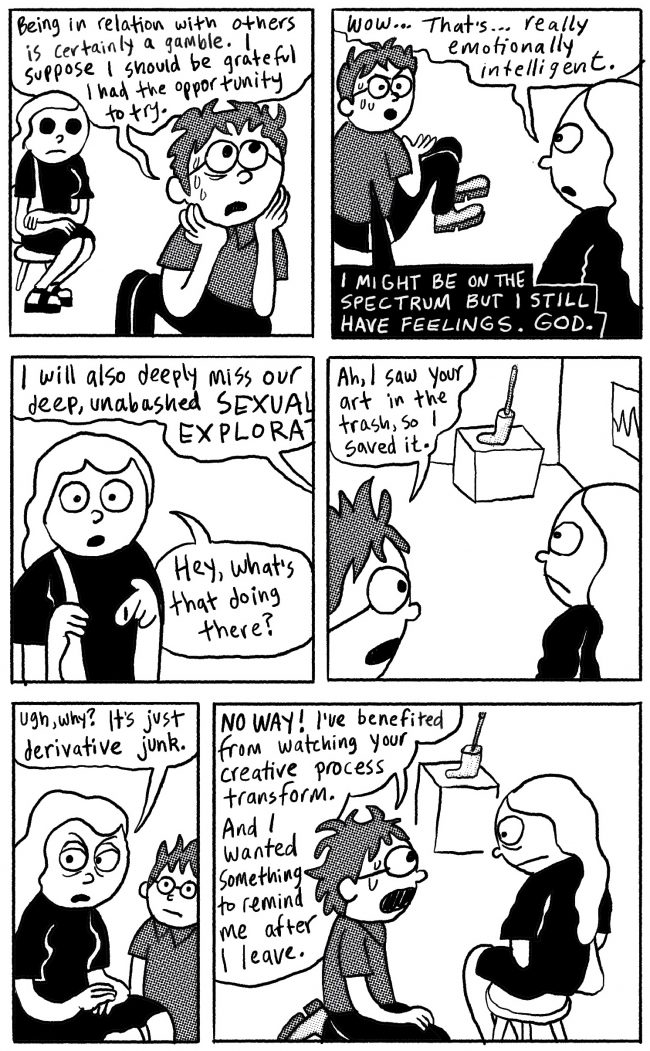 This happens throughout the book. The situations are recognizable enough, but that is helped along by a certain glibness in depiction, which makes me resist it. It’s not often laugh out loud funny, but it possesses the rhythms of a a sitcom, though frequently reminding me of how often current sitcoms stop making jokes to insist on an emotional beat, more for the sake of anyone who might be watching primarily because the actors are attractive and they would appreciate feeling like they’re in love with them than anything the storytelling earns. So while it is in the same general wheelhouse as Broad City or Girls (the subject matter is the relationships of young women, who are adjacent to the upward mobility the arts could offer, but whose behavior places them in closer proximity to self-destruction), it feels more similar to the last few seasons of Parks And Recreation in terms of tone. I can really only cite shows I’ve seen, but this is also what I imagine New Girl is like? The characters are thin, essentially consisting of one to two jokes, or traits that are established for the sake of a joke at another character’s expense: i.e. women whose ethnicity is established so the white male worried about causing offense can have someone to genuflect to. The joke that made me laugh audibly was when one strip ended with Wendy watching an episode of Riverdale, which is maybe structurally similar to the recurring gag of people looking at clickbait articles on their phones, here gussied up a bit with a Family-Guy-cutaway style additional joke. There are jokes, and the rhythm would allow gags to be easily excerpted. But there’s also relationship beats, rendered in this heart-eyes shorthand, that’s used to set up scenes about calling your ex at 3 AM when you’re drunk, which then gives way to longer scenes discussing why that’s not OK. 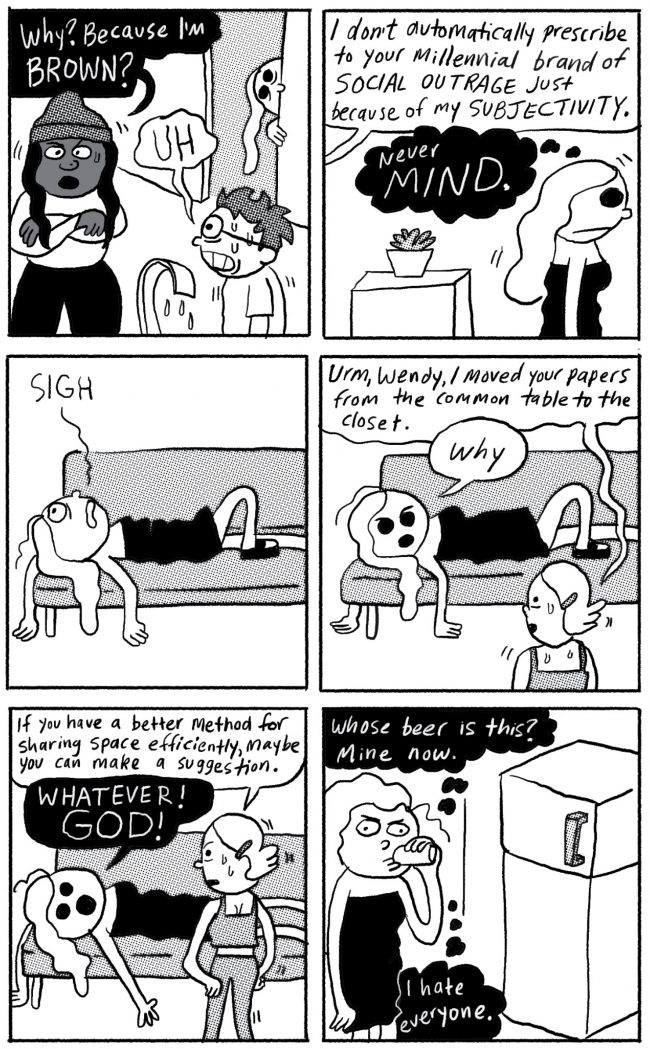 Wendy, whose exploits have previously been published in two books released by Koyama Press, attends graduate school in this third volume. She attends lectures, talks to her classmates, makes work she’s not sure how she feels about, is a sloppy drunk, goes on Tinder dates. She has the most feelings for an artist in a polyamorous relationship. There are some pep talks had general enough to apply to both art-making and dating. The general texture will feel familiar either from your own life or television shows you’ve seen. What separates it from TV is its chronicles of crits and justifications couched in theory. That it’s built around the spine of the art school experience makes it feel pitched to an audience with first-hand experience of being willfully inaccessible. It’s expected the reader can relate to feelings of being miserable and hating everything and everyone. 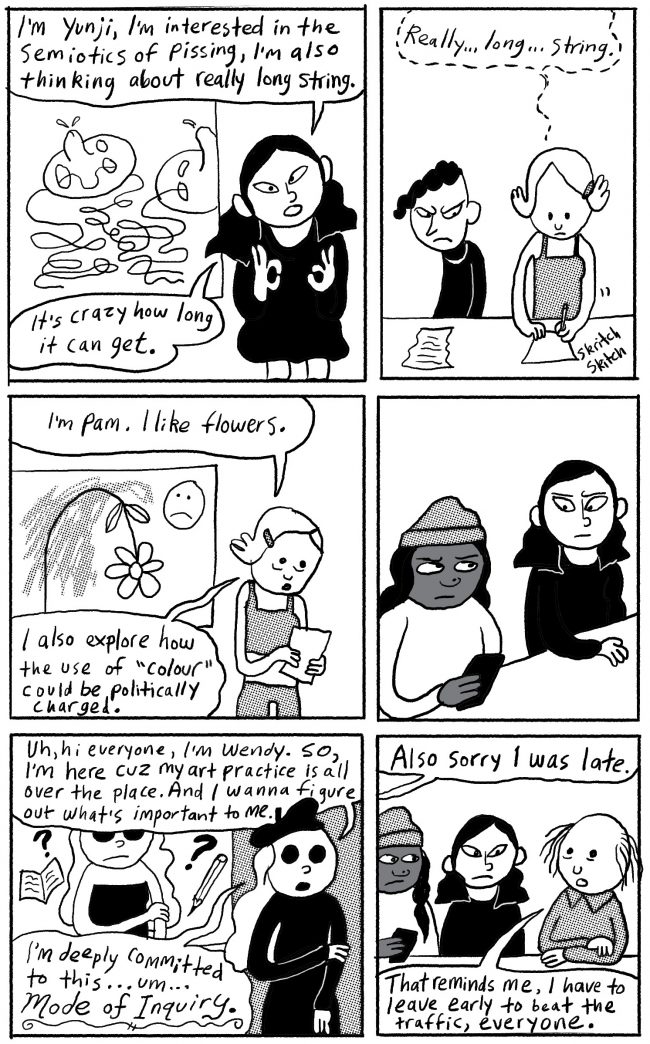 The result is something that is both readable enough to pass the time and contains such a mixture of art-student specificity and normie-vibe relationship drama I can’t imagine anyone being that into it. The lettering’s really good, but no one’s buying a graphic novel for its lettering. I can get imagining it might be popular: it’s sort of like the Friends to Megg Mogg And Owl’s Seinfeld, and I am aware Friends was the more popular show. As a comic, though, I wonder who this is for. Maybe people who object to Nick Maandag’s comics being about “shitty white men” would like this? People who don’t understand how comedy works? Maybe this is just what Canada is like, but it’s not mean enough for my tastes. This comic doesn’t deserve me unloading on it with both barrels, but such an attack may be informative, because if you are the sort of person who sees a vicious roast and thinks “damn… That’s a bit much,” maybe you would appreciate the gentle comedy of goofs and spoofs Wendy: Master Of Art offers. 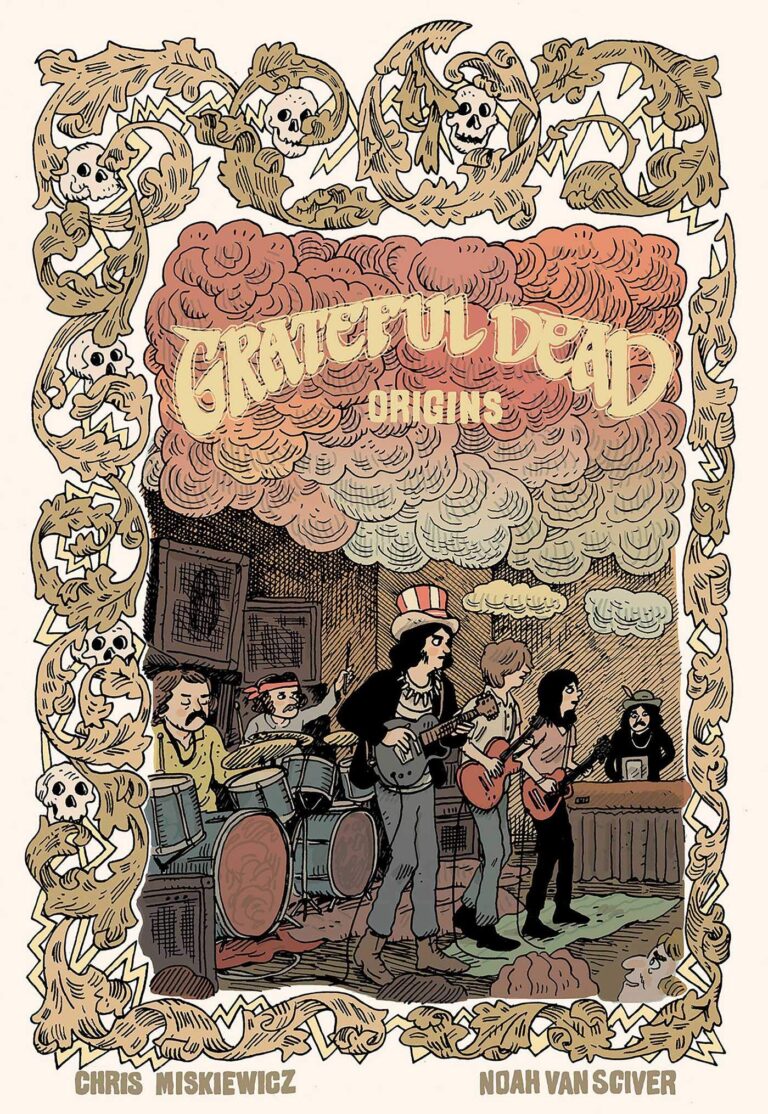 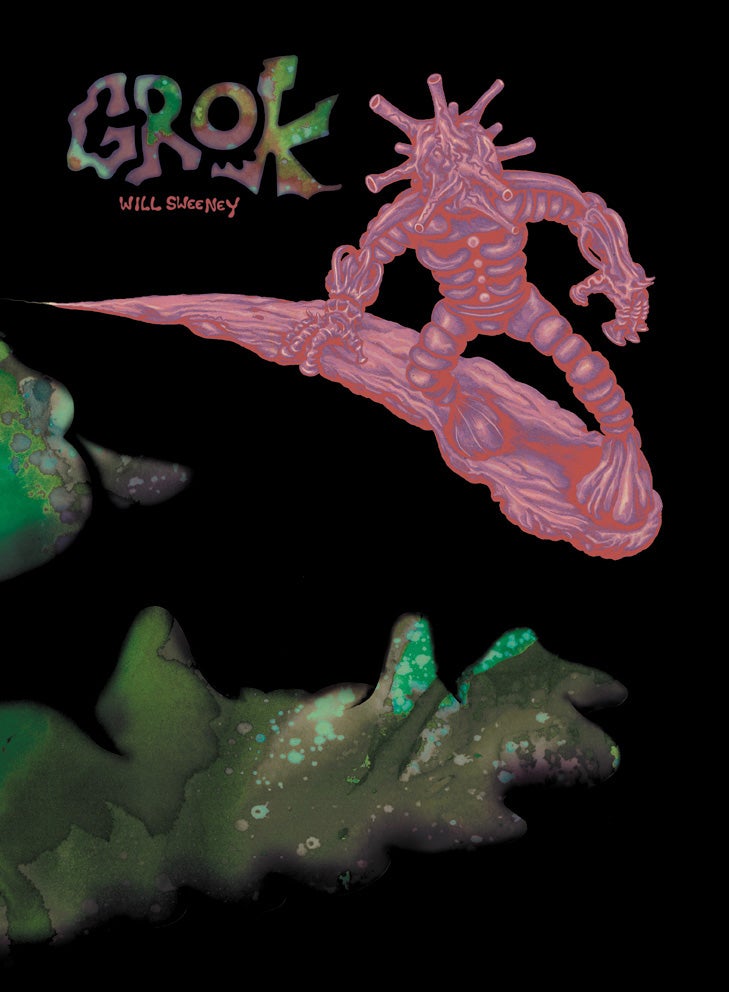