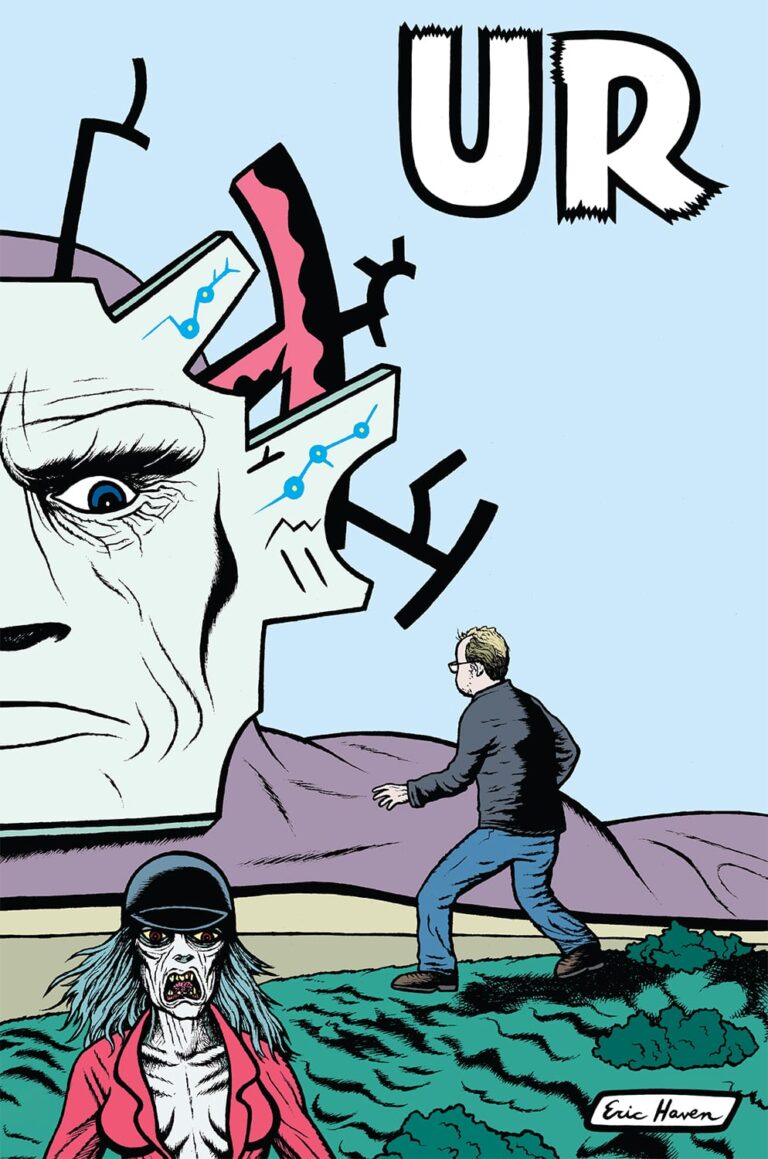 Ur has two meanings: it is a reference to an ancient Sumerian city, and also a word indicating that something is the most original, basic or primal form of something. In Eric Haven's comic UR, he gets at the dark and primal portions of his own imagination, as attractive bartenders are actually reptilian monsters and the world can crack in half at any time. It's also a reference to the sort of comics that clearly influence him, especially Marvel comics from the 1960s. It's not so much the stories that seem to interest him but rather the trappings: the weirdness, the emotional exaggerations, and the frequent stiffness of the art. His goal is not to imitate it nor even parody it, but to celebrate it in the most absurd and strange manner possible.

Above all else, and despite the fact that it's listed as "Mature/Adventure/Superhero/Sci-Fi/Fantasy/Horror" on the back cover, UR is at its heart humorous. Darkly humorous at times, to be sure, but there are dozens of superb punchlines to be found here. Take "The Equestrian", for example. This is a plotless story about the titular character (a ghoulish, near-skeletal jockey) intent on destruction for its own sake. First she uses her riding crop to smash a lighthouse, causing a ship to run aground. Then she takes out an airplane's engine, causing it to crash. Then she strikes the ground twice and destroys the earth. The end. Haven perfectly gets down that EC Comics-style appearance minus the explanatory narrative and builds the story up in a rhythm that escalates the action until it reaches an over-the-top ending. It's not funny, per se, but it has the rhythm of a joke and embraces its own silliness. 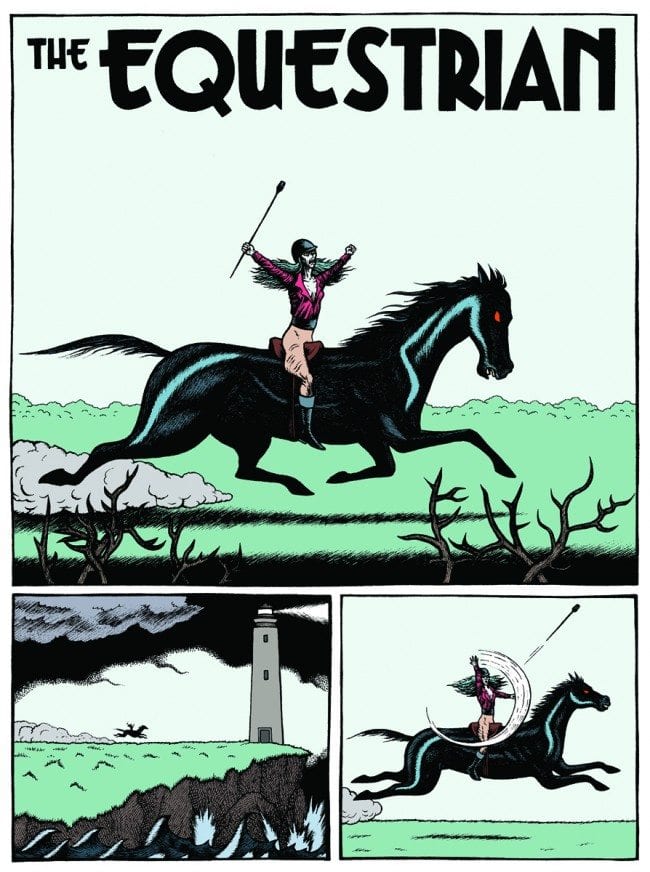 The superhero pieces are perfect pastiches with regard to their inspirations. "Even An Android Can Dance" is a direct reference to an old issue of The Avengers drawn by John Buscema. It's even got that sketchy, slightly stiff Buscema style, as the story follows a grim avenger who destroys a man whose very dance moves threaten the universe. The silly punchline is predictable but no less funny because of Haven's total dedication to the premise and style of art. "Bed Man: Dream-Lord Of The Night Sky" features a Fletcher Hanks-inspired character by way of Winsor McCay's Little Nemo, as Bed Man flies around in his bed, fighting aliens in the most graphic manner possible. Haven includes enough visual and narrative references to Hanks to clue the reader in to what he's doing, yet it's all of a piece with the rest of the book. 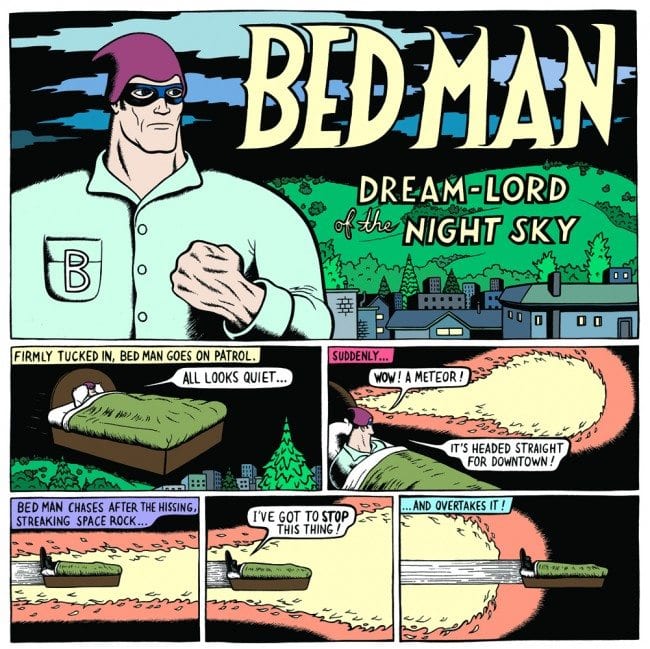 That's because a Haven stand-in is a frequent presence in the book, tying together all of the weirdness. In "Reptillica", his "liver ...tingling" informs him that there's a bar nearby tended by a beautiful woman who promptly knocks him out. He awakens to find that the woman is a reptilian humanoid who's placed him in a pit in order to feed a monster. There's a touch of hilarious, misogynistic paranoia that he's spoofing here in addition to telling a story that fits squarely in the horror tradition. On the other hand, "Man Cat" is all about a humanoid cat who pisses on things, drinks milk from the carton and inadvertently shoots his own head off, only to have a bat-creature emerge from his body and menace the town. It's again a silent form of storytelling where Haven surprisingly ups the ante of a story's threat level in totally silly yet horrifying fashion. 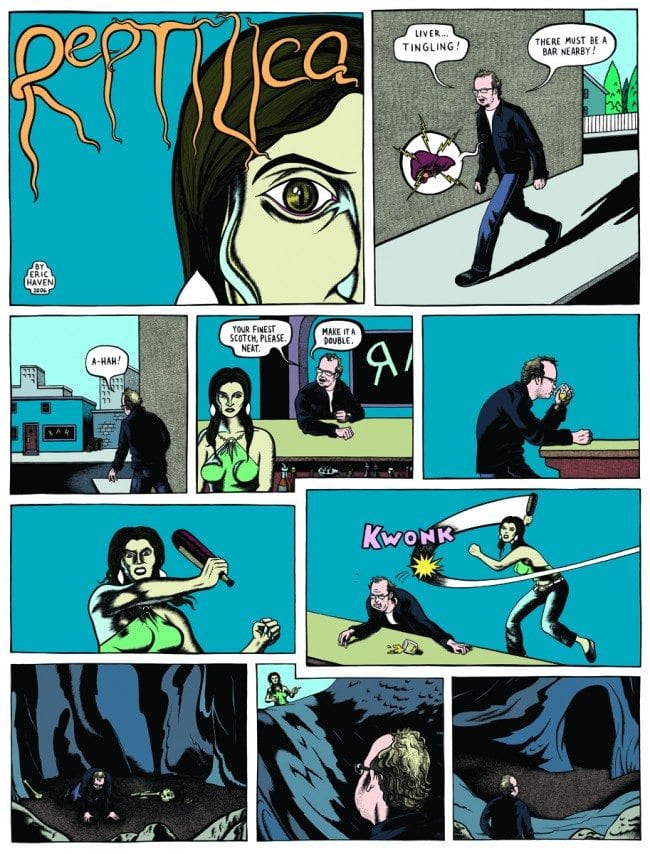 The centerpiece of the book is the series of short strips featuring the Haven stand-in Race Murdock. There's a loose continuity between each set of these four-panel strips, as Race's head is eaten by his human praying mantis fiancée, gets a new robot head, has his cancer-ravaged penis replaced by a weaponized high-tech device, and then causes the end of the world with thrusts into the earth. Race gets killed a whole bunch of times in increasingly funny ways but also has time to shout superhero battle calls when he was "frustrated or over-excited" as a form of Tourette's, the best being "Imperious Rex!" while having sex. Haven even spoofs his tendency to have Race injured by everything around him when a violin bow slips and pokes out Race's eye. 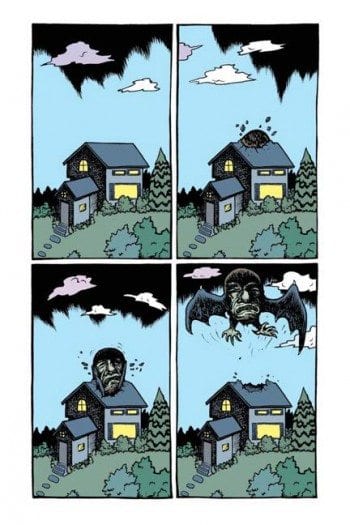 UR is in full color and Haven takes advantage of it, using the slightly flat four-color schemes of older comics to help inform the visual aspects of his stories. Color also adds to the visceral and even lurid qualities of his stories, playing up the "cheap thrills" aspects of the sort of horror and superhero comics he enjoys riffing on. His line is clean, spare and even a little sketchy, and so the color does a lot of work in terms of both unpacking narrative and giving the pages their primary source of decorative qualities. Like any great pastiche comic, it's done in a style that lovingly but knowingly critiques its source materials and works because it's a credible enough approximation of the original to function as same while still acting as a modern comment. Haven doesn't have any specific agendas or critiques of the original material; it's clear that he just likes it and thinks it's fun. In that respect, Haven's nearest comparison is Michael Kupperman, another absurdist cartoonist with a whole different set of cultural references and influences. Both use some of the principles of long-form improv comedy, like callback jokes, repeating images and riffs on random topics. Haven's references are more strongly tied to traditional comic books and their tropes, but one doesn't have to know the original references to enjoy his bizarre and playful sense of humor. 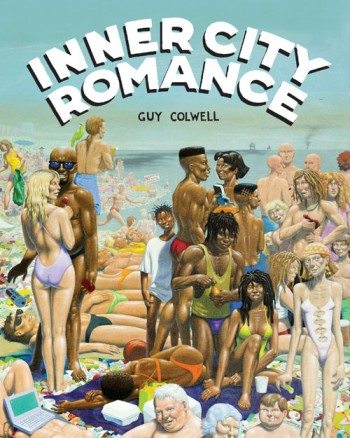 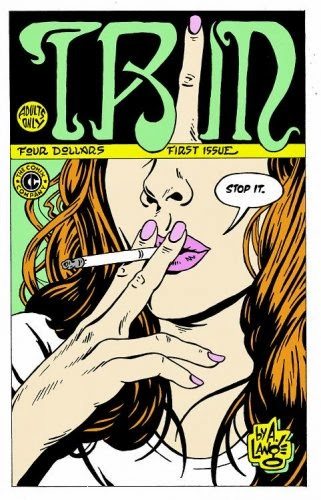