Fortunately, laughing out loud – even talking loudly to yourself – is not frowned upon in Berkeley cafes. (Indeed, frowning upon someone, no matter how offensive and high-decibel his ravings, is so eschewed, you would think it would have frowners hauled before some Human Rights commission.) So I was free to snort my way through Turkish Trilogy, by Wostok and Friends, unrestrained.

As I understand it, in the early 2000s, the American blogger Seanbaby posted online reviews of bootleg videos of grab-the-bucks (or lira) unauthorized Turkish remakes of hit Hollywood movies, including Star Wars, The Wizard of Oz, and The Exorcist, which had been churned out at a level of excellence which made Plan 9 from Outer Space look like Citizen Kane. These reviews caught the eye of Wostok, a Serbian cartoonist/film maker, who had seen the same bootlegs. Unbeknownst to and unauthorized by Seanbaby, he then drafted comic book scripts based upon them and led workshops, from Macedonia to Slovenia, in which dozens of amateur cartoonists illustrated these scripts, which Wostok had printed in book form in Croatia, in runs of ten or twenty, ordering more each time he sold out his stock. One of these made its way, via the internet, to Berkeley and me.

That neither Seanbaby or Wostok nor, as far as I know, any of the workshop participants spoke Turkish only contributes to its appeal. So does the fact that the workshops lacked equipment on which to show the videos, leaving the participants only Wostok’s reconstructions of the films to rely on. Not to mention that Wostok’s English, in which he wrote and, for those who did not speak Serbian, conducted the workshops, while good, is not of Sir Kenneth Clark’s quality. 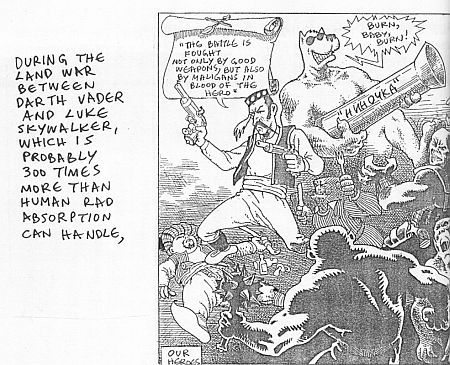 Trilogy is a rib-tickling gut-buster. The prose is witty and inventive, and the judgments (most of which I presume to be Seanbaby's) “kicked the ass off my face”—to cop one I admired. The Turkish language is said to sound “like Dracula squeezing a mouthful of pudding through his teeth from inside a washing machine.” Special effects were considered “so crappy” it would have cost more to make them “out of macaroni.” The screenplays seemed written in “the international language of retard” and bizarre enough to answer “that age old question whatever happened to all that hash the Turks took away from Billy Hayes in Midnight Express.” You had an “insane use of gel filters,” zoom lenses used beyond all “narrative and artistic meaning,” and musical scores created from old, scratchy recordings of roller rink organ music.

It seemed, Trilogy summed up,  like a CARE package containing a motion picture camera had fallen off a cargo plane and been found by a village idiot, who decided to make a movie. Plots were so imbecilic you could fast-forward twenty minutes and miss nothing. Robots were built from garbage cans set one upon another. Mummies appeared to be bit-players wrapped in toilet paper. Warriors wore pasta strainer helmets. Scenes shifted between day and night without reason. Corpses wriggled. The Dorothy in Wizard disappeared from a crucial scene probably, it was surmised, because Turkish labor laws required child actors to spend several hours a day in haunted salt mines. (She also was reported to have been played by an actress who made it seem like Judy Garland had grown up, gone crazy on her pain meds, and been forced by her studio to keep playing Dorothy forever.)

The films set “world records for lack of production values.” They proved “whatever (others) can do, (Turks) can do much worse.” The most entertaining use to which they could be put, Trilogy suggests, would be to invite your grandparents over, spike their tea with LSD, slip a video in the TV and pretend nothing was wrong. If we could understand the motivation of these film makers, the reviewers say, “we wouldn’t be sitting here. We’d be powering flying cars with our minds at some kind of smartest people ever convention.”

When the point of a words-and-pictures book is critical judgments, the pictures are secondary. The words render the verdicts. The pictures compliment or amplify them. Turkish Trilogy has, by my count, 16 to 25 illustrators per book. A single four-paneled page may have four illustrators. (Individual panels are not signed or otherwise credited, so it is impossible to know who did which, unless you are familiar with the styles of non-professional Slavic cartoonists.) Most are sketchy – a few lines, some dots – many are big-footed cartoony or abstract. Only one artist takes a realistic, if noir-exaggerated, approach. To drive home the yucks, Princess Leila is a thunder-thighed, fishnet-stockinged, stiletto-heeled, whip-wielding dominatrix. And Dorothy resembles a cigar-smoking, be-stubbled Russian woman shot-putter of the 1950s. It may not be subtle, but it’s great, goofy fun.

I am led to this concluding modifier by having the “narrator” of the opening Star Wars critique resemble the Disney character of that very name. (He bears on his shirt the words “Kunyat Arkin,” the name of an actor, renowned in Turkish cult-film circles, but I am not fooled.) The author/artists’ judgments appear to be scathing, but the book is playful. Trilogy seems to say, “Hey, you want amateurish; we’ll show you amateurism that can deliver.” In fact, if you want to get political – and I do – at a time when Turkey seems to be devolving from Western democracy into theocratic totalitarianism, Wostok can be viewed as exclaiming, “Yo! Here’s how valuable collaborative, free-flowing, liberated consciousnesses can be.”

I mean, you have three films, each of which had attained, not only the massive dollars of popular success, but the olive wreaths of critical acclaim. They had become significant props of American popular culture and, as such, of American identity. To “debase” these films, as the Turkish film makers have done, out of avarice and ineptness, leaves one aghast, offended, appalled. It is not just the rip-off and the defilement but the revelation that there was nothing in the essence of these works – neither story, nor structure, nor character – and perhaps by implication, nothing at the core of America either – which can withstand the tweaks and twists, whether from individual action or historic or cultural forces, sufficient to avoid its own reduction to junk or offal or dribble from the mouths of fools.

But against the onset of this encroaching despair, comes Wostok, Seanbaby, and Friends, who, with saws and hammers, fresh eyes and enhanced imaginations disassemble these debasemenys and reconstruct them into something startling, new and fine.

One more thing. I had wondered if Wostok’s glee at taking on the Turkish film industry might have been influenced by Serbian ill will simmering since the Battle of Kosovo in 1389. (Any Philadelphian, like me, who rooted against the Boston Celtics in the 1960s, has a taste of  how grudges may linger.) Wostok, however, denies this. He says only extreme right-wing Serbian fanatics still have it in for the Turks. For him, the “weirdness, spontaneity and imaginativity (sic)” of the movies constituted unwitting examples of ostranenie, the early 20th century Russian avant-garde theory of art, in which things are made as “as unusual and strange as possible” in order to cause people to freshly re-experience the everyday. He laughed at the movies. He laughed at Seanbaby’s reviews. He laughed at the idea of people creating drawings about weird movies they had never seen.

And what more than laughter, he wrote me, “can you ask for in these gloomy times?” 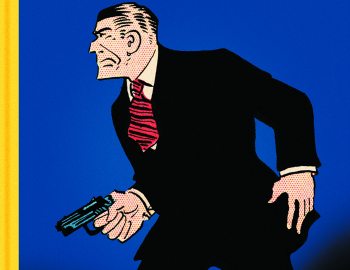 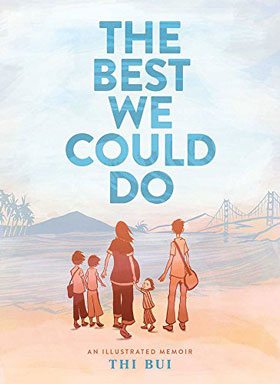