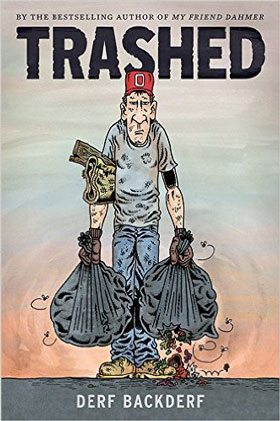 In the prologue to Trashed, Derf Backderf’s follow-up to his acclaimed My Friend Dahmer, J.B., an early-twenties college dropout, is awakened mid-morning in his squalid bedroom by his mother, who reminds him to take out the trash and get a job. J.B. grudgingly complies, schlepping the trash bags out to the curb. When one of the bags breaks, J.B. leaves the mess: “The garbagemen can deal with it.” Later, searching the want ads, he calls the one that asks for “temporary help,” and is told to report to work the next day. The scene then cuts to a bewildered J.B., holding onto a garbage truck as it careens down the street: “H-h-holy crap!” he thinks to himself. In his new occupation, J.B. will be seeing and dealing with things he never before imagined, and we’re along for the ride. Holy crap, indeed.

First published in 2002 in floppy pamphlet form, Trashed began as a memoir, based on Backderf's experience as a garbage collector from 1979-1980. He revived it as a webcomic a few years ago but soon switched gears: “It was no longer a memoir.” He expanded the story by interspersing the misadventures of J.B. and friends with chapters about the history of waste management. The mix of fiction and comics journalism works quite well, with the factual sections actually emerging as the most compelling of the two.

The story of J.B., his friends Mike and Bone, and their coworkers in waste management—“the crap job of all crap jobs,” as the cover reminds us–pulses with comedic energy. The bros battle harsh elements, bureaucratic nonsense from their exacting boss, Wile E., and cope with backbreaking, often dangerous labor. Worst of all, of course, are the never-ending heaps and piles of stinking, rotting garbage awaiting them curbside. One of their best weapons in enduring their long, dirty, smelly shifts is a mordant sense of humor. At one point, as they peer into a garbage can full of maggots, writhing through a pile of decay, J.B. says, “Here’s your lunch, Mike! Dig in!” Mike: “Mmm-MMMM! But I forgot my spoon!” It’s all in a day’s work for our intrepid heroes.

In my favorite scene, they are faced with a decrepit old piano left on the curb. After expressing the appropriate frustration at being expected to dispose of this ridiculously huge, heavy item, with great effort they manage to heft it into “Betty,” their venerable garbage truck. They listen to the jagged notes created as the huge instrument is ground up, keys, strings, and all. “It’s… it’s… horrifying AND beautiful!” Mike says. “It’s a concerto in trash minor!”

Though sincerely and humorously presented, the fictional sections of Trashed do have some dialogue problems, particularly at the outset. J.B. and Mike speak too often in exposition, cuing readers into their situation with dialogue that is clearly intended to impart information. A more naturalistic show-don't-tell approach might have been harder to pull off, but would have been worth it (or perhaps the omniscient narration used elsewhere could have been employed here). 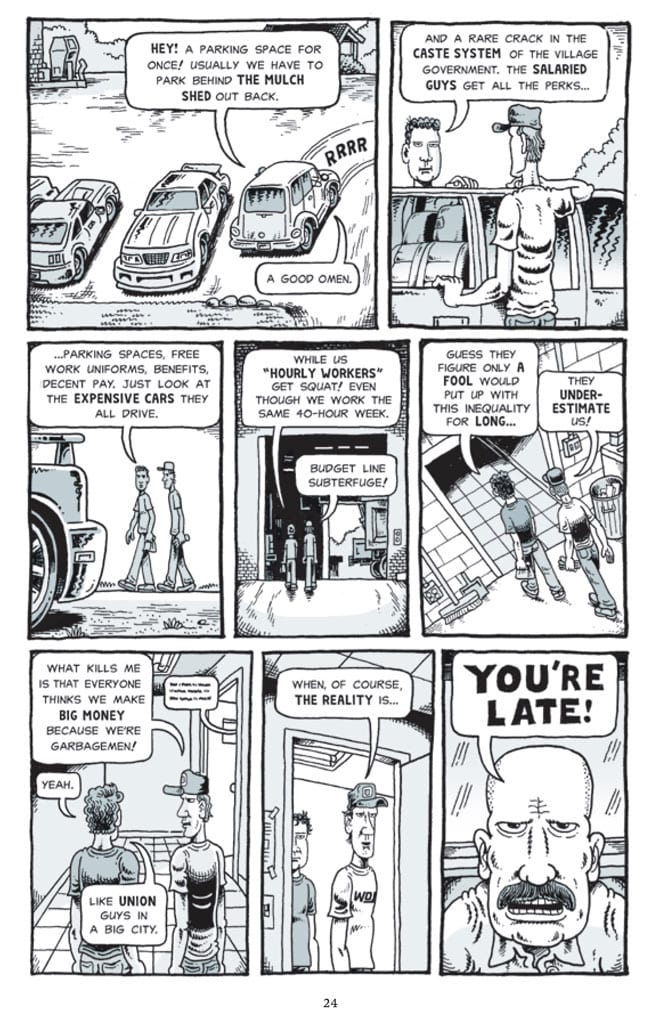 Though J.B. and Mike are at the forefront of the narrative, their inner lives are only hinted at, and we don’t get to know them very well. Their antics serve best to illustrate the nonfiction portions of Trashed–where Backderf, a master of comics journalism, really gets to show off his chops. He begins with a brief tour through the history of garbage, offering several enlightening factoids, such as the fact that the first garbage dump was created in 3000 B.C. in the city of Knossos on Crete. We also learn that in pre-Civil War America, pigs were used to remove garbage on city streets: “New York City had so many free-roaming hogs that Charles Dickens in ‘American Notes’ begged city fathers to rid the metropolis of the ‘ugly brutes.’” Turns out that when Patti Smith sang, “The transformation of waste is perhaps the oldest preoccupation of man,” she wasn’t kidding. Other facts and stats that would likely otherwise register mildly on the average person’s can-you-beat-that-o-meter are brought vividly into focus with Backderf's deftly detailed visuals: 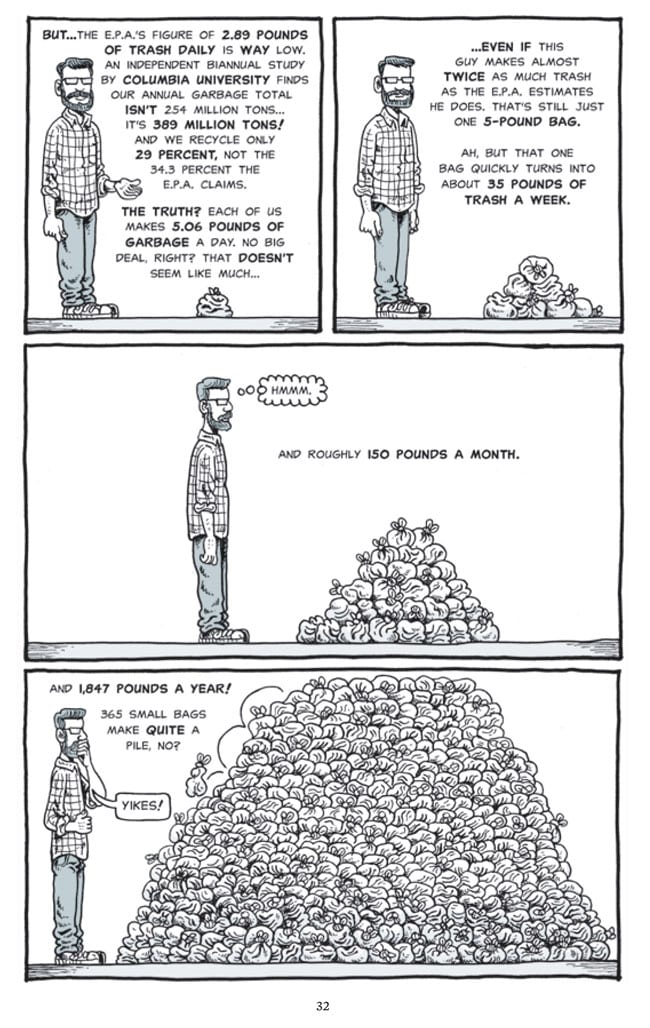 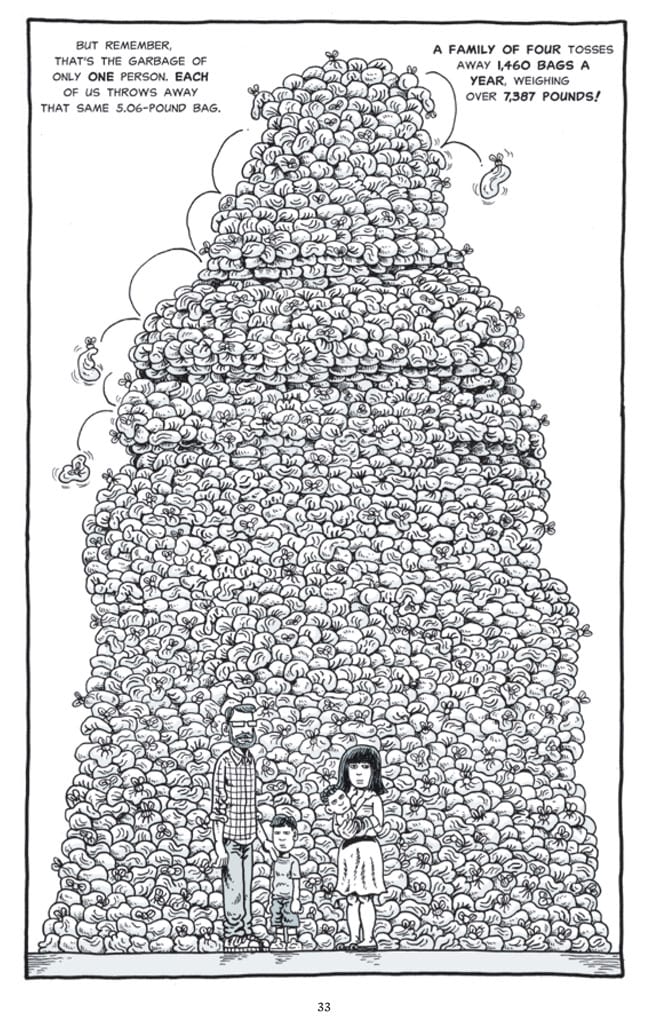 In proud underground comix tradition, Backderf gleefully renders panel after panel of revolting scenes in loving detail, including piles of used disposable diapers, leaky bags of wet dog poop from a kennel, and a dirty cat box–complete with a dead cat lying on top. Disgusting in an entirely different way is the fact that nearly 30 percent of our garbage is packaging and containers: “That’s right. The largest part of our crap is the crap that our crap comes in!” Backderf also reminds us that recycling, however noble, has barely made a dent in our vast landfills, those ginormous oceans of waste that pockmark the planet.

By the end of the book, one of our heroes decides to make a life change while the other looks to become a possible lifer in the industry. Though J.B. and Mike aren’t the most well rounded or sympathetic protagonists, we feel for them and wish them well. The real star of Trashed is the trash itself: how we deal with it and how we don’t. As with My Friend Dahmer, Backderf’s greatest strength is shining a light on the dreadful things we think we don't want to know about, but can't resist looking at in horrified fascination. We’re left contemplating our inability to rein in the enormous amount of waste we generate each day, week, year, decade, and so on. Trashed is a funny, educational, and scary read. 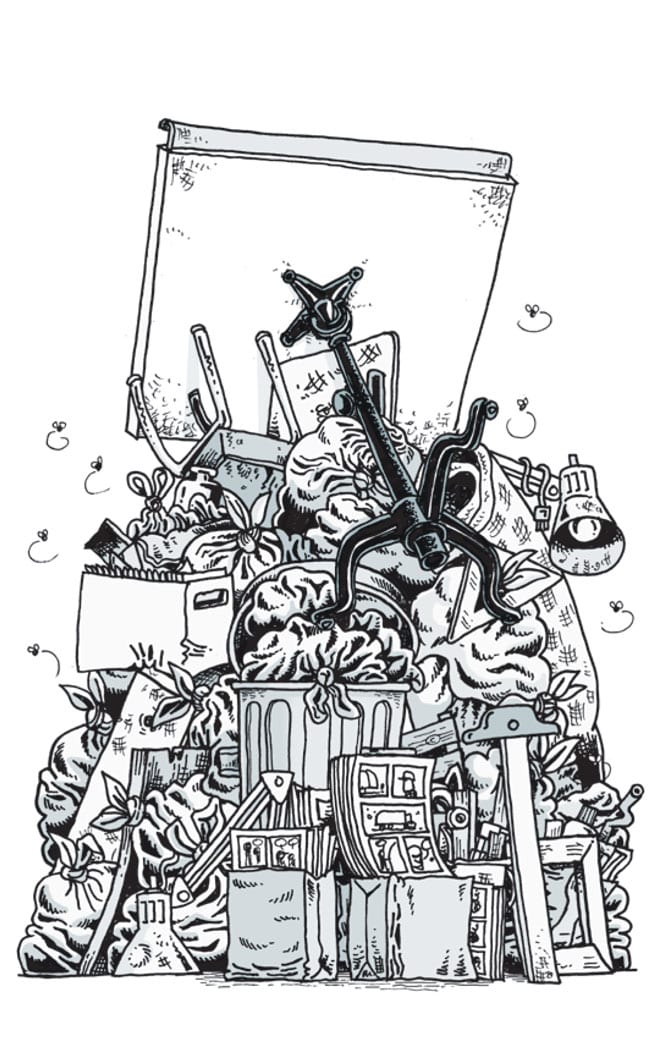 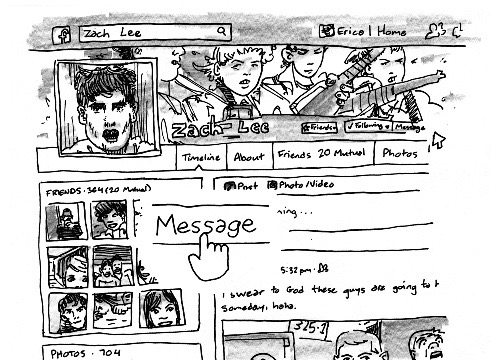 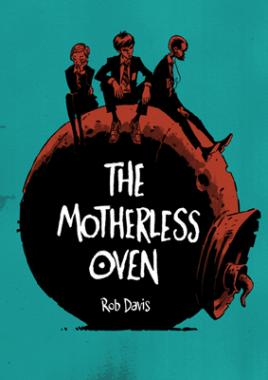