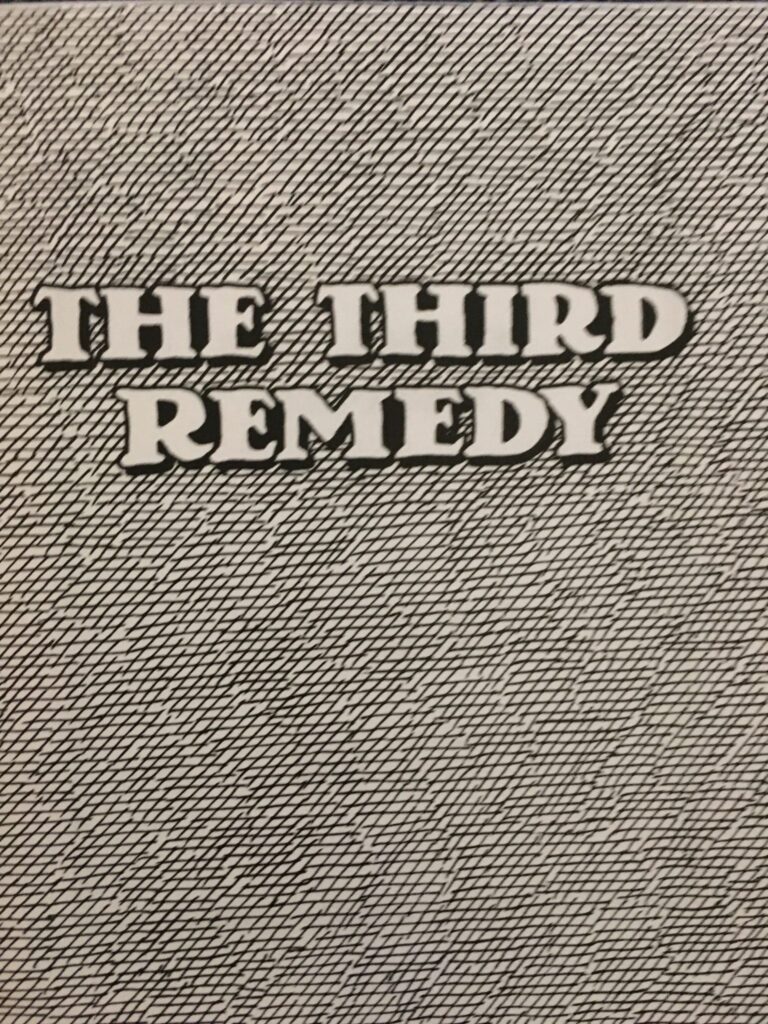 Inside was a black-and-white comic, 37 pages, four-by-five-inches.

The title was The Third Remedy.

In a box centered on the back cover it said “This story was originally published in 1949 in Walt Disney's Comics and Stories number 101 (Volume 9, Number 5) February.” On the title page, in a larger box, it said, “Story written by Carl Barks. Artwork drawn by Bob Kane.”

There was no price, no copyright notice, no identification of or information about the publisher.

The principal characters were Batman and Robin.

SPOILER ALERT! (Should it matter.)

The book’s single story finds Batman gripped by a series (nine in a week) of terrifying nightmares, involving monstrous Martians and Batmobile crashes. After his first remedy (sleeping pills) fails, the doctor prescribes that Batman, in order to relax (the second remedy), take up crocheting doilies. Batman fears he will be “disgraced” if word about this gets out, but he obeys. This fails too, so the doctor tells Robin to apply The Third Remedy. Batman must be scared “by something more horrible than he can see in his dreams.” 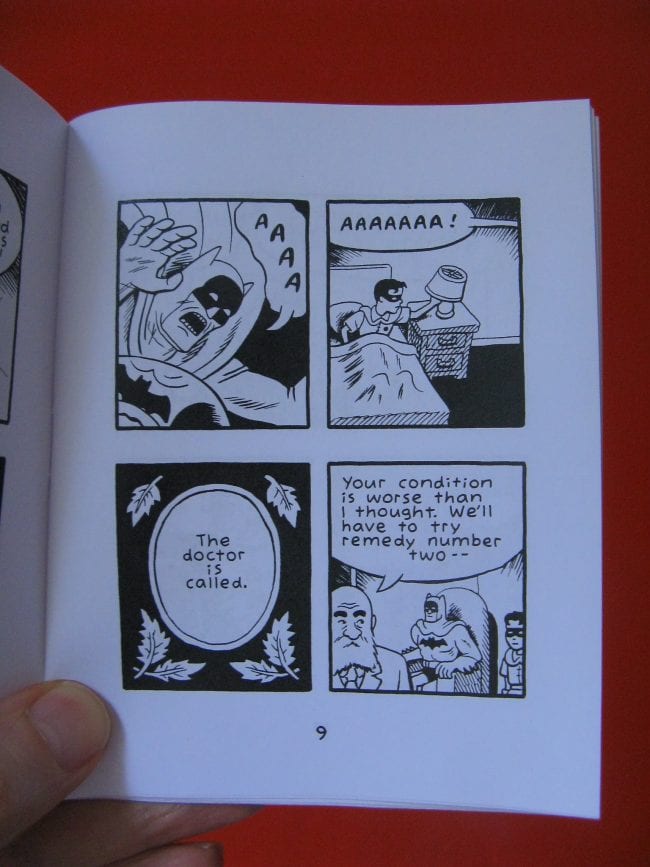 Meanwhile Robin has told Bat Girl about Batman’s crocheting and Bat Girl has told Mrs. Gobblechin, a short, plump, middle-aged woman with eyeglasses and a feathered hat. They decide to invite him to exhibit at the local (Gotham City? Duckberg?) needlework club. When Batman sees them approach his house, he flees in the Batmobile, and they give chase in a cab. (“Ye cats, those women are after me.”) The chase zigs and zags for 10-miles. Batman prefers diving off a cliff into a shark pool than give a talk on crocheting. Bat Girl summons help from The Petit Point Embroidery Club and the Companions of Needlework. With hundreds of women after him (“This is WORSE than any nightmare...”), Batman jumps into a lions’ pit. Exhausted, he “falls into a peaceful sleep.” (The lions too.)

The Third Remedy had arrived without explanation.

I believe it came because of a Patreon contribution I made months ago. I don’t remember how much I contributed or if additional rewards were offered to people who contributed more. I would note that Brown has been beyond generous with providing contributors, through Patreon, with practically daily e-mails offering examples of his creative process on past books, discussions of what he is reading, where, what and with whom he is dining, his position on socio-political issues (primarily sex workers), and information about his self-gratification practices. Photos were customarily available.

Google confirmed that there was a Walt Disney's Comics and Stories 101 and that it had been published in 1949. But it would cost me $50, plus postage, to see it. So I texted the dealer, who turned out to be the collector/historian/all-around comics maven Bob Beerhbohm. He told me, as if from memory, its central story was entitled “Three Remedies for Nightmares,” that Number Two was crocheting, and that it, indeed, was replete with lions, and sharks.

Only it was about Donald Duck and his nephews.

Wikipedia defines “appropriation art,” as that which uses “pre-existing objects or images with little or no transformation applied to them... Inherent in our understanding of appropriation is the concept that the new work recontextualizes whatever it borrows to create the new work. In most cases the original ‘thing’ remains accessible in the original without change.”

Brown has taken a “pre-existing” object, Disney’s story, but by replacing the original characters with those from an entirely different comic has transformed it more than a “little.” Then he has appropriated the names of the creators of the original comic and of the characters he substituted and appended these names to his work while omitting his own. (To add to the fun, at least for those generally in the know, Disney kept Barks’s name off the comics he created and how much Kane contributed to Batman remains disputed to this day.) 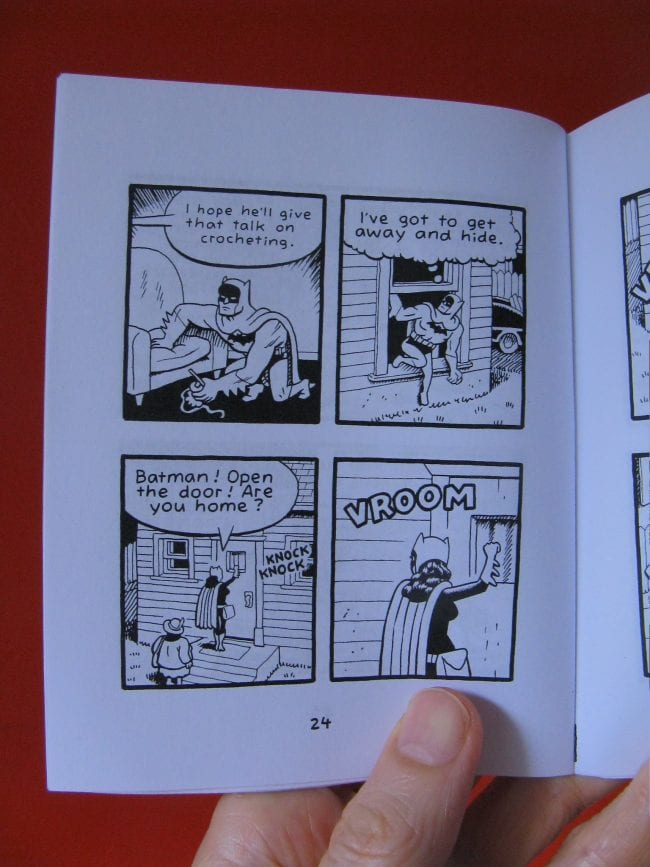 And Brown hasn’t exactly given us a “comic book.” While retaining the conventions of panels, speech balloons, and sequential action, “Remedy” is too small and omits too many of the medium’s publishing formalities for that. But what he has presented is too inexpensive,  too non-exclusive, too anonymous (unless his “signature” on the envelope is part of the work) to be immediately identifiable as  “fine art.”

The Third Remedy bears too much creator’s input for a Duchamp “readymade.”

It’s too seamless a conjoining of “found objects” to be a Rauschenberg “combine.” (By that, I mean it is one thing to place an automobile tire around a stuffed goat. It is another to retell a story with characters different than the original. There is a continuing unity to the latter which the former lacks.)

The closest I came was Jess’s comic strip collage “paste-ups”: “Tricky Cad”; “Big Ben Bolt”; “Nance.” (“No additions... to text, images, line, punctuation, excepting the paste; just compression via scissors and maxmister,” the artist wrote.) But Brown did not reorder panels, only redrew and repopulated them. And the text remained anchored to the straightforward, was not garbled in order to extend toward the “metaphysical.”

But Remedy sure “recontextualized.”

Which seems the important thing.

Kids involve themselves with “funny animals” when cuteness and comfort is what they need. “Super heroes” grab hold when they think strength and power may be the way to security and development. By having the greater-than-human Batman assume the anxieties of a lesser-than Donald, Brown scrambles the identification readers have with each character type, bringing the fear of women/threat of emasculation at “Remedy”’s center more sharply into focus. Then through the silliness by which he delivers this “message,” he mocks it – and anyone, like me, who insists on seeking it out within his text.

After writing this piece, I sent Brown some questions. Here they are, with his replies.

I’ve learned that the actual story exists and that you’ve followed the plot pretty closely and that you’ve substituted Batman for Donald and Robin for the nephews. Was Bat Girl Daisy in the original and Mrs Whateverhernameis the same in the Disney?

Yes, Batgirl was Daisy, and Mrs Gobblechin was Mrs Gobblechin, who, if my memory is correct, appeared only the one time in a Barks story (or in ANY story by ANYone).

Did you publish this yourself or was it D & Q or some other commercial publisher?

It was me. I got it printed at a place across the street from the apartment complex I live in. The folks at D&Q found out about the piece at around the same time you did, when an envelope containing copies showed up in their office.

Whose decision was it to leave off a price, a copyright notice, and contact info on the publisher?

What was the reason? Advice from attorneys?

No, I’m not worried that Disney or TimeWarner will come after me for a mini-comic that really isn’t commercially available. I like the idea of people encountering it and wondering what it is. The Patreon subscribers who have received it obviously know that I had SOMETHING to do with it but probably were, at least initially, somewhat puzzled as to exactly how much of it is mine and wondered if Barks really did write it and what Bob Kane had to do with it. I’m thinking of putting out copies in random public places where people could discover them and be perplexed. Almost anyone who discovers the comic in that way would have no idea that I had anything to do with it — they wouldn’t even know who I am.

Finally, art-object-wise, did you have any particular artists or works in mind that you saw yourself following in the tradition of?

I had a conversation with my friend cartoonist Ethan Rilly a few years ago about his decision to not use his real name on his work. (“Ethan Rilly” is a pseudonym.) I can’t even remember his reasons now, but it put the notion in my head of releasing pieces that didn’t have my name anywhere on them.

Doing an adaptation of a story by another cartoonist, but changing the identities of the characters — that might be something that someone else has done, but I can’t think of examples. A lot of the stuff that Bob Sikoryak has done is sort of like that, although he was using well-known characters and cartooning-styles to adapt famous works of literature, not works by other cartoonists. I wasn’t consciously thinking of Bob’s stuff when I was doing my little piece, but maybe his work was there in the back of my mind. I didn’t have anyone’s work consciously in mind. The idea just developed — I wanted to do an adaptation of that particular Barks story, but it didn’t seem interesting to draw it the way Barks had drawn it, so I wanted to change the main character in SOME way, and making the character another popular, well-known one seemed to make sense.

The size of the piece was practical — I wanted it fit into a envelope that could be mailed at the inexpensive letter rate. 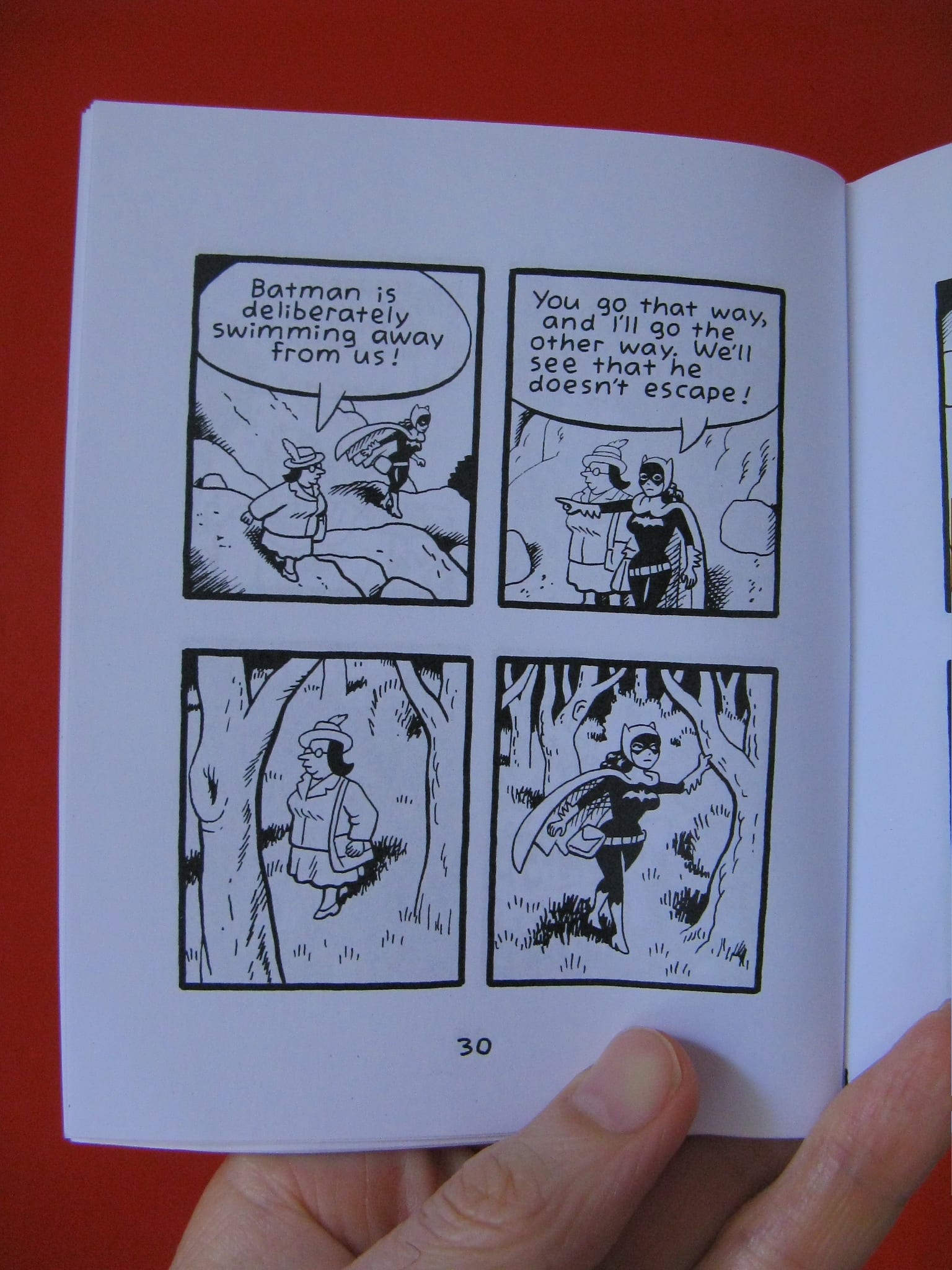 “I like the idea of people encountering it and wondering what it is.”

I liked the idea of looking at what my encounter had led to.

I ran toward finding a tradition, a justification for Remedy.

But Brown, by breaking down the categories “High” and “Low,” was saying, “Hey, it all is ART.” I can’t argue.

In his career, Brown has journeyed through wildly imaginative fantasy, painfully personal autobio, discomfiting political assertiveness, and original historic and biblical interpretation, investing each with intelligence, wit and integrity. It has been an enthralling, enriching ride for his readers (and, one hopes, for him).

Remedy is a small, odd, delightful by-way, and we can be grateful for this detour. 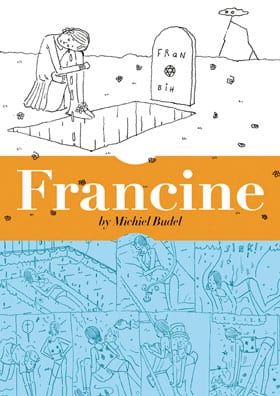 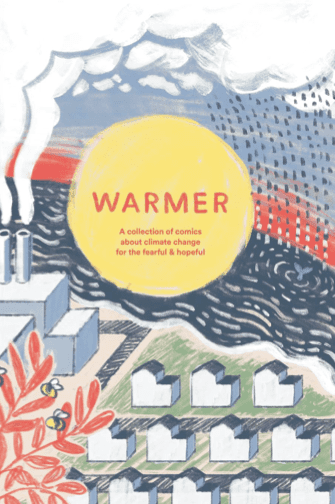