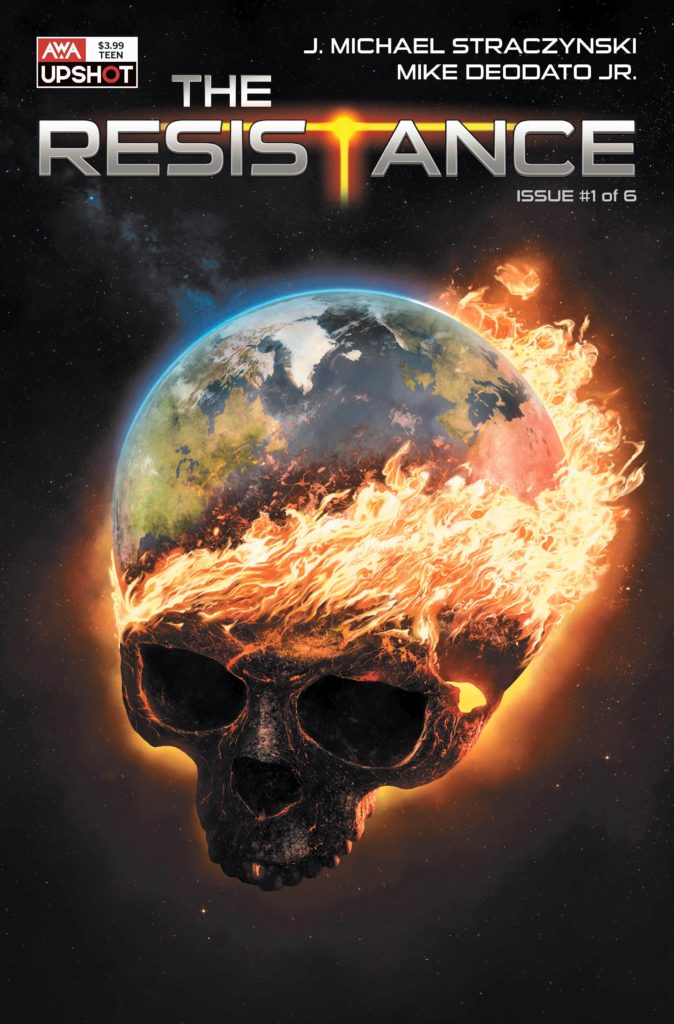 The Resistance is a new series from AWA Studios, a recently launched concern fronted by Bill Jemas and Axel Alonso. It’s written by J. Michael Straczynski and drawn by Mike Deodato, who you might remember for collaborating on a long stretch of JMS’ run on Amazing Spider-Man. You might expect based on that pedigree that this is at the very least a professional looking comic book.

I realize on the face of it that seems a bit like, oh, I dunno, damning with faint praise? This isn’t a great comic but on the face of it, it’s not awful. It does its job of telling a story, albeit a very talky one. So why am I hedging?

Well . . . see, it’s like this. I’m writing these words early in the morning of Friday the thirteenth of March. Within roughly the last 48 hours the stock market crashed again, the President delivered a televised address from the Oval Office looking like he’s about to piss himself with fear, and America’s Sweetheart Tom Hanks contracted the plague. The same plague which threatens as of this writing, right this moment, to storm the fragile barricades of civilization.

The Resistance is a book about a plague that almost wipes out humanity. The first issue of the series shows in detail the means by which a global pandemic can destabilize the major powers. Fascists get elected in response to the sickness. Things change quickly once the Chinese Army starts dropping nukes on population centers to try and contain the spread. Even after the plague abates, the new political order left in its wake is brittle, paranoid, and authoritarian.

It’s a weird book to have cross one’s transom at this moment, I guess you could say. 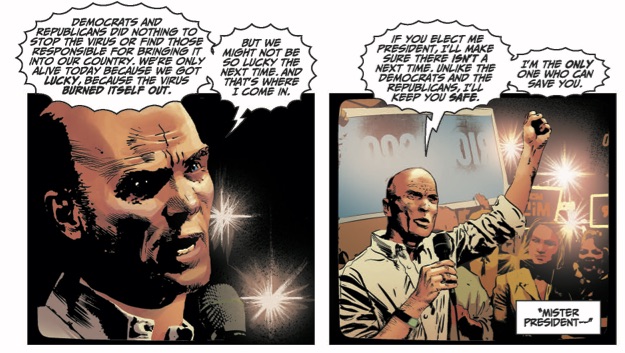 Anyway. This is ostensibly the beginning of a new superhero universe. The gimmick is that after the virus recedes it is discovered that, of the roughly 5% of patients who survive the plague, some of them develop superpowers. Some of those superpowers last only a brief time, leaving their host dead once they burn out. It’s stated but not developed (yet) that the virus was of extraterrestrial origin. Which means it’s only really a little different from George R. R. Martin’a long-running Wild Cards shared universe. And of course any resemblance to Marvel’s Strikeforce: Morituri is surely purely coincidental. Or Charles Soule’s Letter 44, for that matters

Most of the two issues provided for the purposes of review are spent on exposition of various kinds, both of the direct narration kind and the people-sitting-around-a-table kind. Since I started paying attention it has become clear to me that writers in 2020 really like having a bunch of people sit around the table explaining the plot. I see it in so many comics now. I wonder, is that what happens to creators in a world where “write what you know” too often butts up against “I only know being yelled at under fluorescent lights by people who make a lot more money than me?”

Worth pointing out, however, that I’ve read a few first issues from JMS over the years - Supreme Power, Rising Stars, Midnight Nation - and he really, really likes spending the bulk of his scant storytelling resources in first issues establishing premise. Which is all well and good until you realize that you’re 1/3 of the way through a six-issue mini and it’s still just random scenes of, like, the President ordering someone killed juxtaposed with unknown teenagers having ominous dialogue somewhere else. There’s no structure, things just happen. 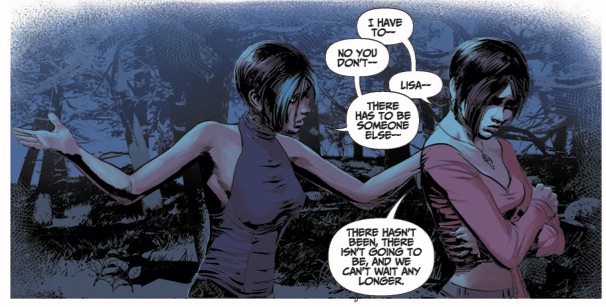 The series - complete with the spooky coincidence of this death-haunted book happening to come out right this fucking minute - reminds me of nothing so much, tonally, as Hiroya Oku’s death-haunted epic Gantz. That book, similar to this, is an ultraviolent metaphysical fantasy built around the premise that the human race is facing extinction at the hands of aliens who are trying to take over the planet so they can harvest people for food. I haven’t finished many manga series, but I finished Gantz because there’s something quite compelling about that series’ mixture of relentless misanthropy and wide-eyed hopefulness. Deodato’s precisely detailed work here, complete with his usual surfeit of photo references, resembles Oku’s CGI-inspired hyperreality. The Resistance wants to swim in those dread waters, but so far . . .

. . . honestly, if we’re being brutally frank, the fact that this comic is coming out right now seems unfortunate. I see people on Twitter settling in for semi-ironic screenings of Outbreak because we’re all scared to death of the mass fatalities that might be waiting around the corner. I don’t really want to read a dead-serious story about superheroes fighting fascist presidents in the aftermath of a pandemic. I don’t want that now and I don’t think I’ll want it anytime soon.

This isn’t a great comic book but it’s not terrible. It’s being released at the worst possible time it could ever possibly be released, so is most likely doomed. Better luck next time, fellas. 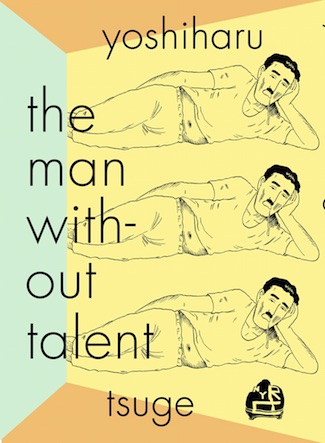 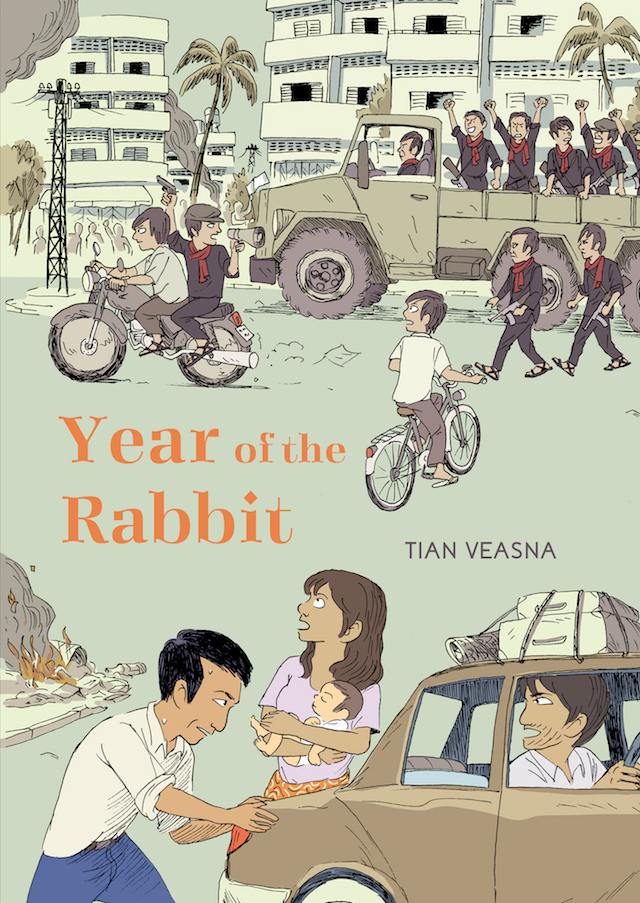