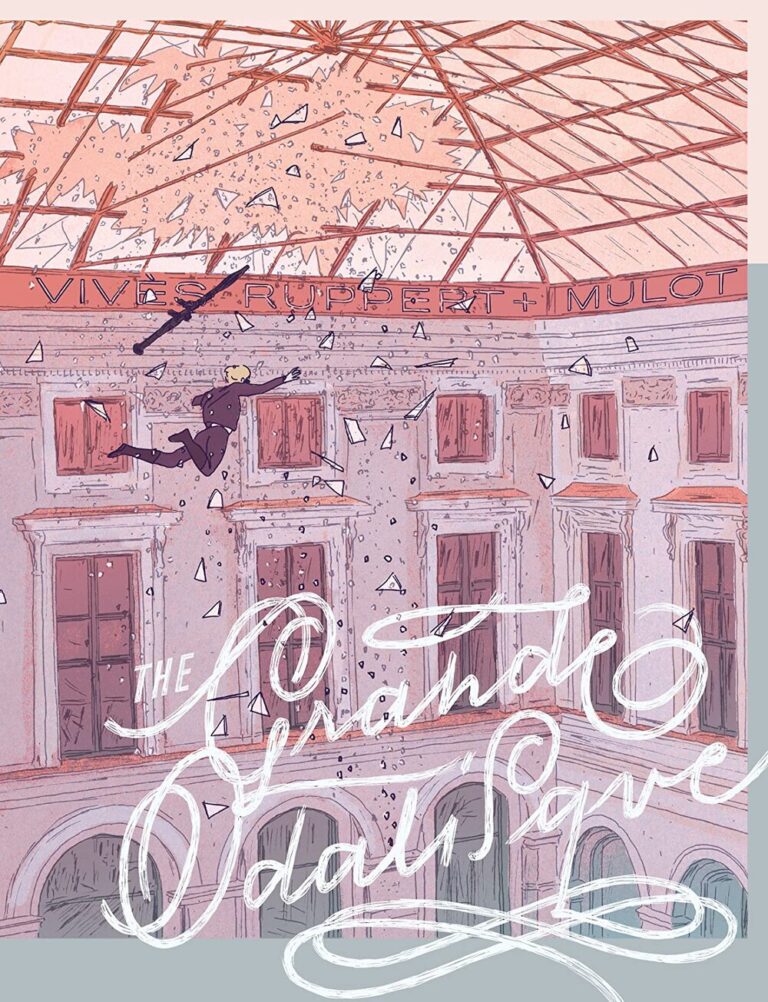 Should you read this big, beautiful, nicely colored Eurocomic from Bastien Vivès, Florent Ruppert and Jérôme Mulot, congratulating yourself on your sophistication? Or should you go read Kate Beaton, Carly Monardo and Meredith Gran’s “Strong Female Characters” again? I bet you can guess what my answer is going to be. I was 12 pages into The Grande Odalisque before I started to get seriously annoyed with it, as Carole (the blonde of our trio of protagonists, the other two being [you got it] a brunette and a redhead) lounges nude in a hot tub, adjusting the bandage on her injured arm, her nippleless, watermelon-shaped and -sized breasts buoyant in the water, having a tough discussion with an armless dude who places his stumps on the shoulders of two equally buxom, bikinied, lipsticked women. Surely this well-reviewed book wouldn’t continue on in this vein, right? Only it did.

My hopes inflated slightly once again when Carole and Alex (the redhead, not as massively bazoomed but just as model-like in her proportions) played ping-pong on the beach while conversing about the newest art heist they’ve been hired for: stealing Ingres’ La Grande Odalisque from the Louvre. Carole describes it as “that painting of the chick with the three extra vertebrae. The whole disregarding-realism-to-accentuate-beauty thing,” and that at least seems to be a bit of a wink-wink at what these three male creators are up to, a kind of self-mocking Charlie’s Angels (2000) thing that could let us eat our cake and yet still have it. If only that idea made its way through the remaining 100-ish pages. Instead, we get Carole and Alex creeping through an office on all fours, somehow elevating their hindquarters in an extremely flattering way. We get crashing through glass windows, lots of casual violence, talk about men as though they’re truly important. We get the most ham-fisted introduction of a character whom we are supposed to think is a man before she removes her motorcycle helmet and shakes out her flowing locks that I have ever seen, with Carole referring to Sam (her) as “he” for two full pages before the reveal, upon which she says, “Oh, and one last thing, he’s a she.” We get a striptease on rollerskates. We get one character waking up nude next to another character (also nude), following a drunken night out. In short, unless it is one of the most committed jokes I have ever experienced, it is not a joke. 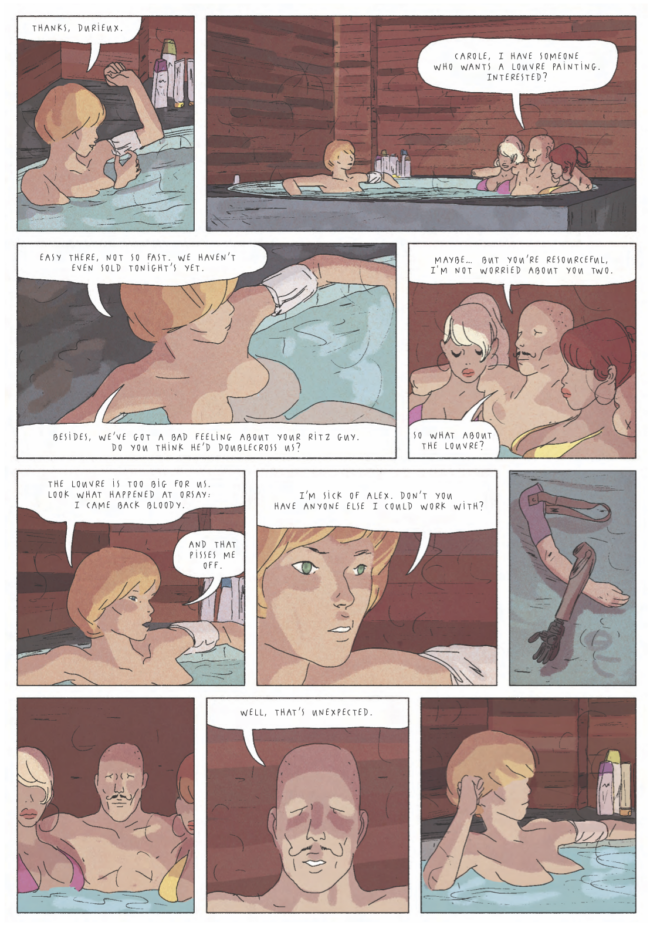 Ingres may have ignored anatomy in his attempt to make a beautiful image and he may have objectified his subject, but at least he didn’t have the nerve to pretend he was giving her some agency. The fact that its creators made this story a museum heist, one of my very favorite genres, and included such nicely constructed and drawn action scenes makes the fact that it annoyed the hell out of me all the worse. It’s one thing to hate something when you’re not expecting much. It’s another entirely to be hit with brokeback poses and “tough” dialogue and Barbie Doll figures when you’re anticipating a romp and, what’s more, to realize that at least half the comics-reading population will perceive it as nothing more than a fun action comedy. This book is a great example of how the Bechdel test is a useful but limited tool for assessing art. 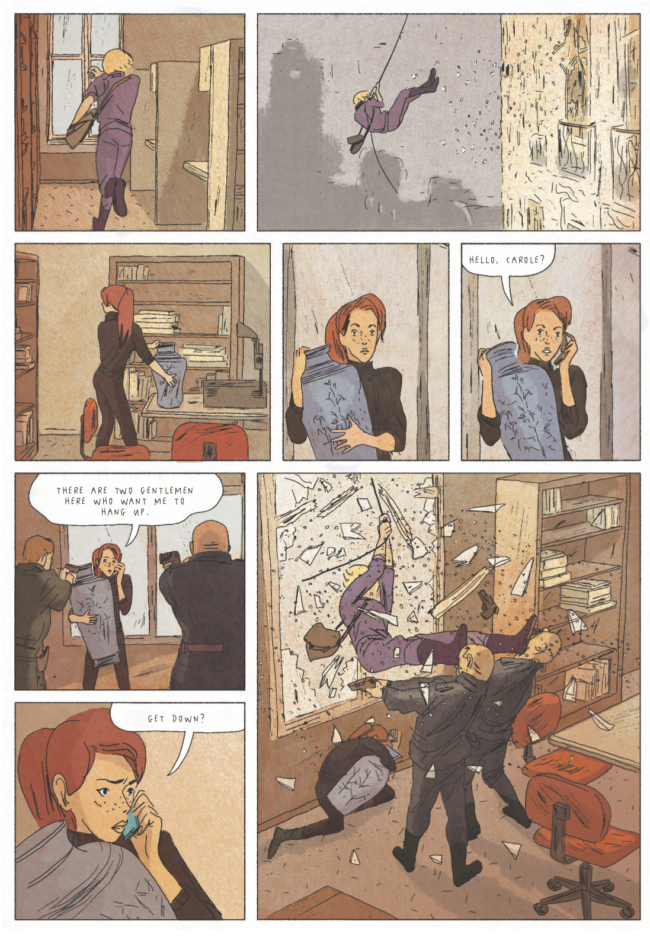 It’s not clear which of the three creators is responsible for what in the book, so they can share the blame. I read and wrote about Ruppert and Mulot’s Barrel of Monkeys back in 2013 and gave it a pass on its shock-value content due to the fact that it had some beautiful and innovative cartooning, and I expect this book will also get the benefit of the doubt. But it’s not nearly as formally innovative as that one. The action scenes are well drawn and well paced, with good use of repetition and then breaks in those established patterns, and the pages are nice and big, allowing for scale to play a role. But either the plot isn’t all that well thought out, relying as it does on special effects like smoke bombs and misdirection, or I was too mad to pay attention to it properly and too unwilling to go back and sort through it properly. Fourteen years after Barrel of Monkeys, I’m a different person than I was when I wrote about that book, and it’s a different world. I might not have the same reaction to it today that I did then if I were to come upon it afresh. We can’t step into the same river twice. The almost faceless quality of Ruppert and Mulot’s drawings hasn’t changed much, but now it feels different. The casual cruelty of Barrel of Monkeys doesn’t appear to have matured into something warmer and more humane. And I’m 14 years more tired of putting up with men’s bullshit, especially when it’s coming out of the mouths of hand-puppet women. 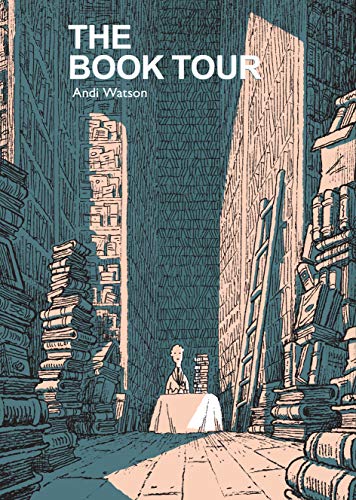 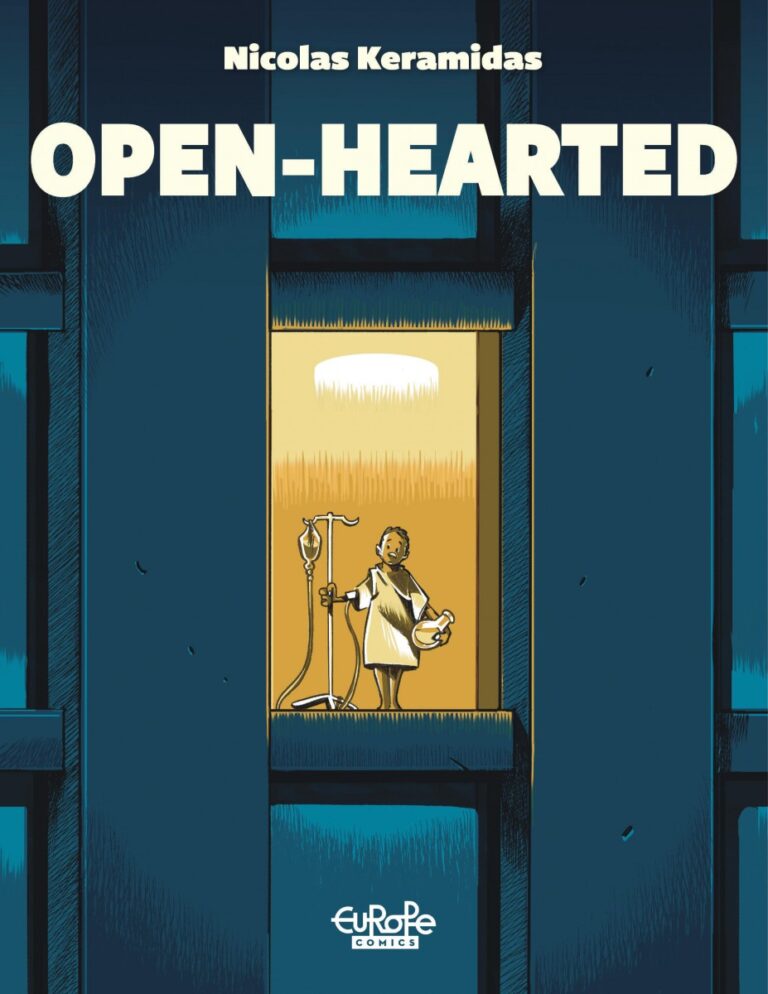