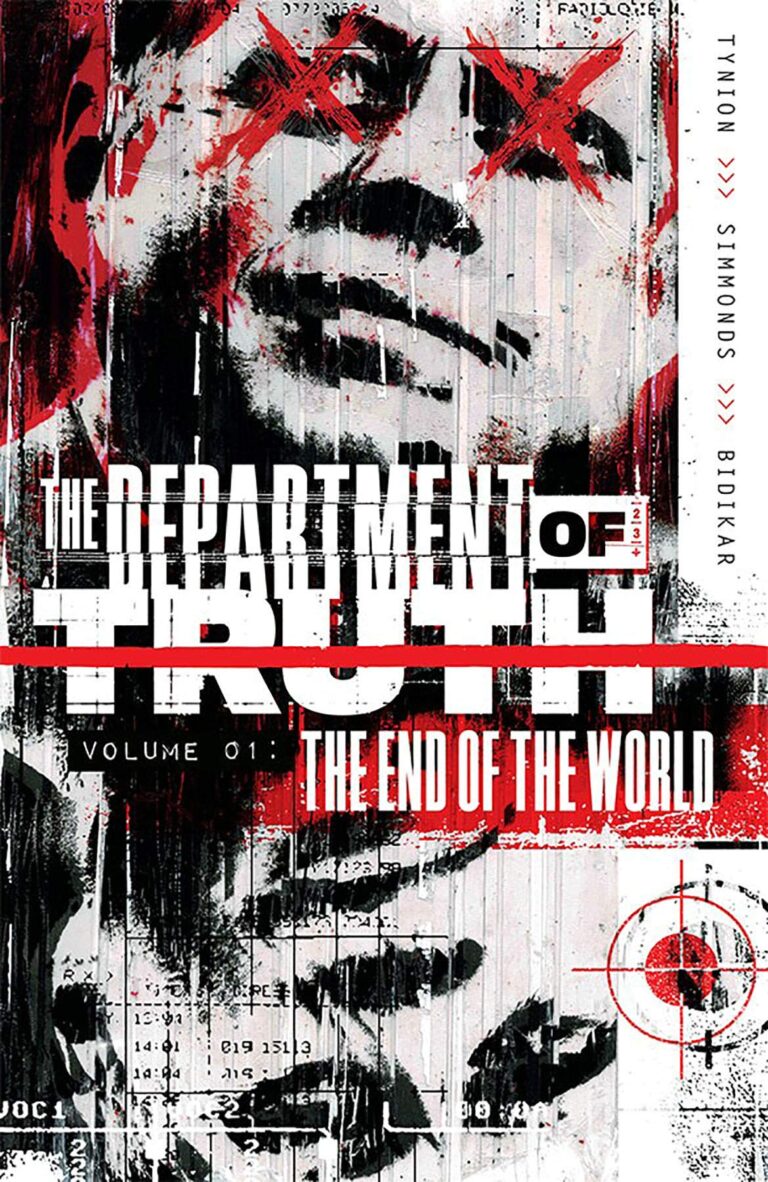 The Department of Truth volume 1 will leave you feeling disoriented, confused, and incredulous, but is that the point? The creative team consisting of writer James Tynion IV, artist Martin Simmonds, letterer Aditya Bidikar, and designer Dylan Todd come together to seize the zeitgeist of our current cultural and socio-political moment and cast it into graphic terms to make sense of it all. It's a tall order but something that they try to tackle nonetheless. The story takes place spatially and temporally in our own. As conspiracy theories run rampant in the dark corners of the internet and imaginations of the uncritical, there lurks a U.S. government agency called The Department of Truth. Their job? To eliminate propagators of conspiracy theories and tie-up any loose ends that threaten the stability of the truth that they seek to uphold. In this storyworld, the truth isn’t necessarily something that exists objectively; rather, it is generated by the belief that something is true. In other words, there exists a semi-stable timeline of facts and events that happened, but when people begin to believe in alternative facts and theories then the more those alternative facts start to become real. Thus enter The Department of Truth.

At times the story can feel convoluted and its logics confusing. One could argue that these feelings of confusion and incomprehensibility are a part of the experience of reading a story about conspiracy theories, but my question then becomes: was this a part of the plot’s design, or are there massive plot holes to be explored in the metaphysics of the storyworld? My instincts point to the latter since we can’t find evidence (yet) that draws the connections we need to understand the dynamics of—and in-between—belief, truth, and reality. I often found myself befuddled by the reality-bending quandaries that the protagonist Cole Tuner mirrored in his reactions and attitudes. Turner is apprehended by black-suited figures, interrogated, and subsequently offered a job at the Department. Needless to say, he accepts the job offer albeit apprehensively, and then begins his descent down the deepest rabbit hole of them all. There are some reveals in the first volume that will keep you turning pages to get to the bottom of this rabbit hole, but as the story goes on you begin to realize that there is no bottom, or rather that the bottom is comprised of an ensnaring and complex web. Turner’s journey into the nature of truth forces him to wrestle with personal demons, literally and figuratively, while at the same time trying to understand the various enigmatic characters that enter the fray. It’s a mess and I’m dubious whether that’s the point Tynion is trying to drive home. 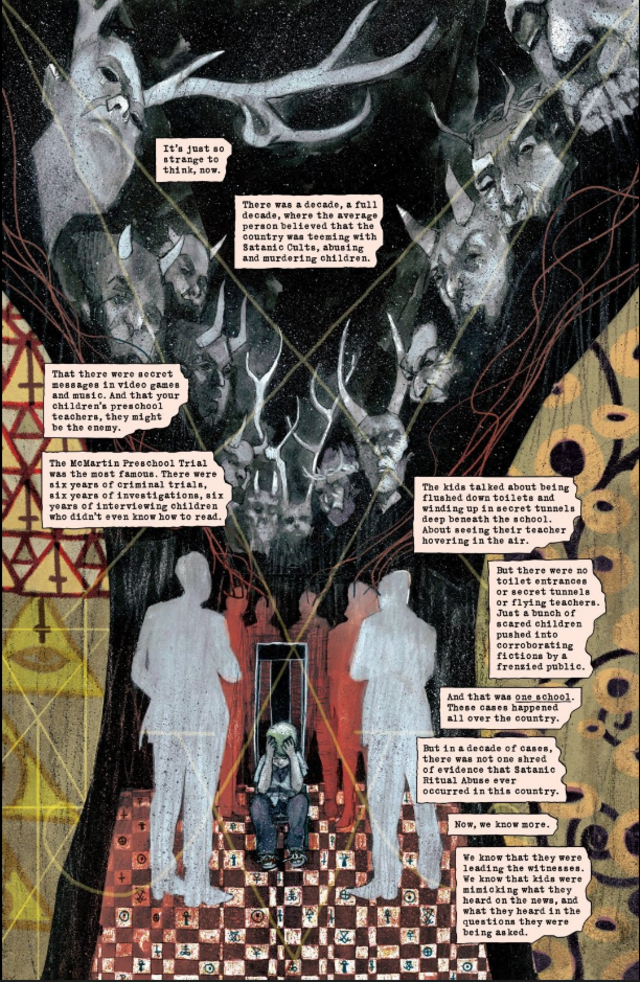 The bewildering metaphysics of The Department of Truth is underscored by its frenetic and opaque art style rendered by Simmonds. The art attempts to capture an aesthetic that is jarring and divorced from what things actually look like and is more interested in what things ought to look like where reality is constantly warping in accordance with our collective beliefs. As individual panels, the images are striking and gorgeous, but as comics, or sequential art that are always considered in juxtaposition to one another, the images seem dead and static. The stasis makes for a reading experience that is frantically convulsive as your eyes are trapped and released by each individual panel or splash. This stasis can be read as either a spasmodic and dreamlike experience where we question if we are somehow reading someone else’s dream, or it can be understood as a sort of hieroglyphic reading experience where the images feel too flat and motionless. 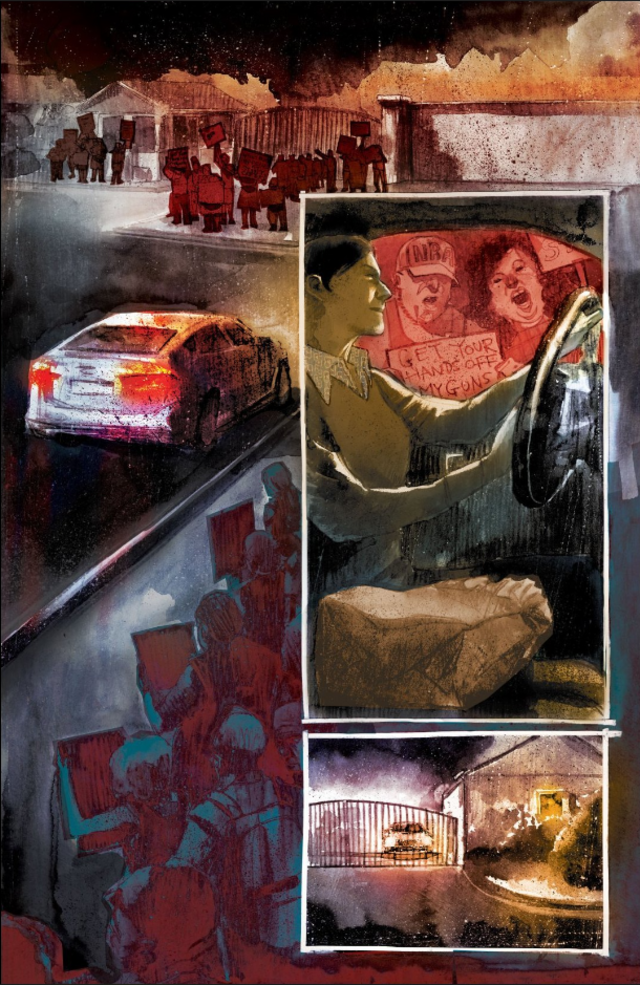 The colors are temperamental, as harsh reds appear in contrast to deep blacks in the story’s most terrifying moments and yet sometimes the colors meander into more familiar palettes when dealing with characters recollecting more normal events in their lives. Dialogue and thought bubbles are some of the most interesting and clever features of the art; their outlines rarely align with the bubbles and captions themselves. The effect is a visual destabilization of what is written, said, seen, and understood in the storyworld which works to inundate us as readers with further doubt regarding what is true. 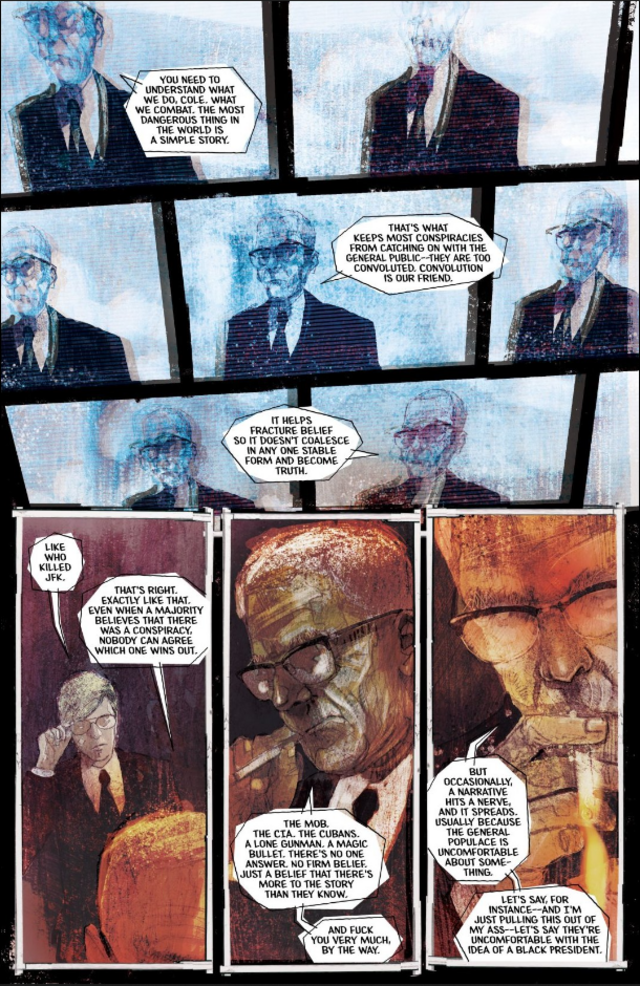 The Department of Truth wrestles with difficult questions about the nature of truth and lends perspective to how it is generated in the world. It goes so far as to implicate all the conspiracy theories out there—from J.F.K.’s assassination to QAnon and everything in between. However, I’m not entirely convinced that all the disorientation and confusion regarding how truth operates in the comic is dealt with responsibly. The plot seems to assert that relativity is a governing metaphysical force in The Department of Truth. This kind of ethic put forth by the comic’s story levels the playing field between truth and conspiracy theories. On one hand, it suggests that dangerous ideas are real; that may be accurate to the extent that when people truly believe something, then they will negotiate their way through the world acting on, or with, that false notion in their heads, in their ethics. On the other hand, it also suggests that conspiracy theories are valid and on equal footing with the truth as ontologically stable and equally veracious. I also wonder: is a bureaucratic government agency really the best answer for dangerous conspiracy theories becoming real? I’m doubtful, to say the least, but I hope the story leads to a place that calls this type of solution into question. 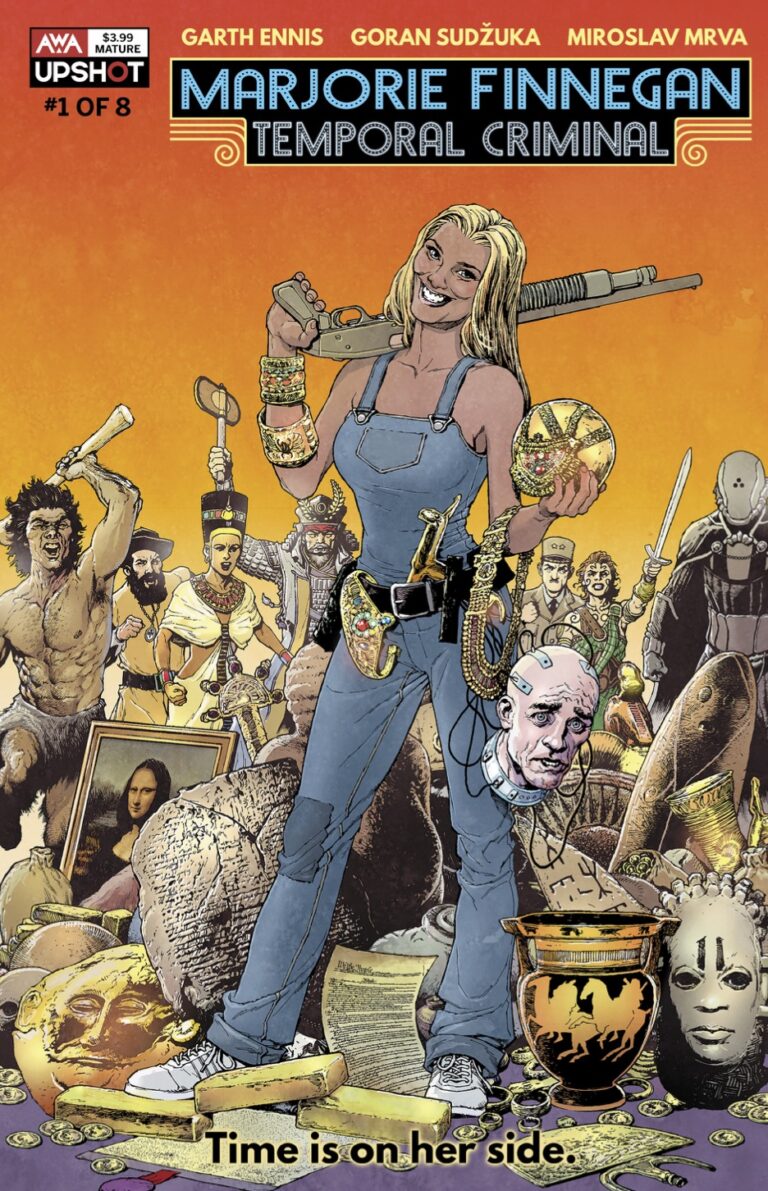 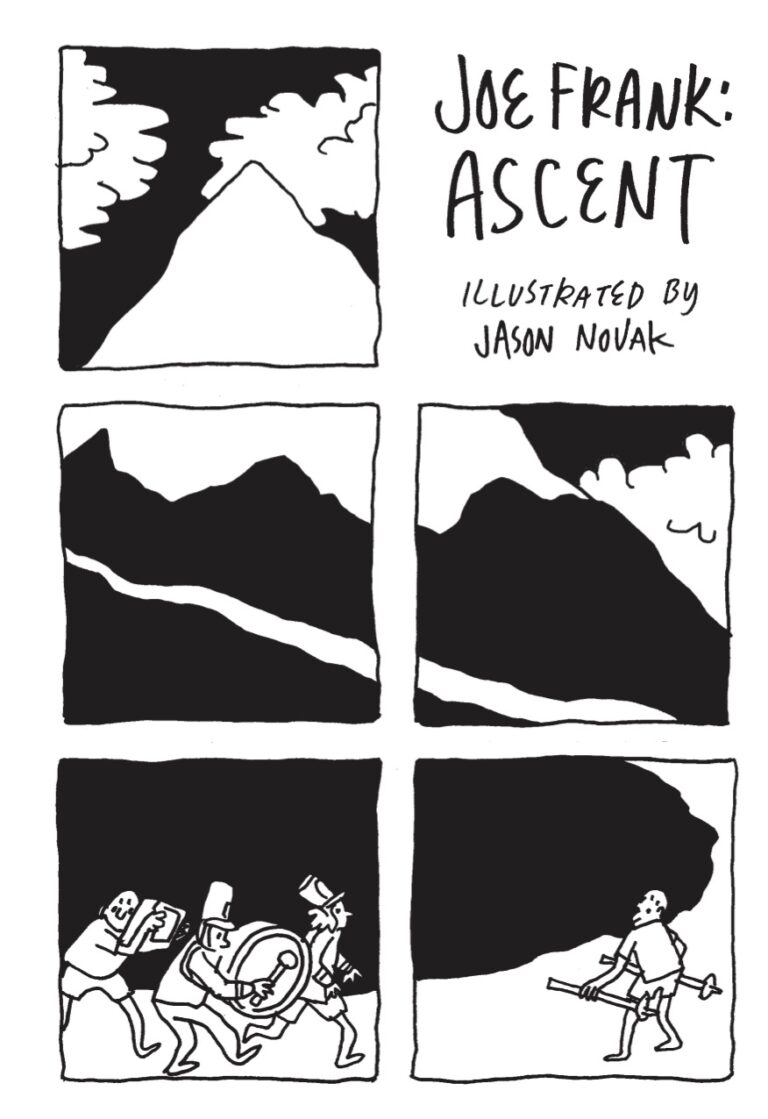