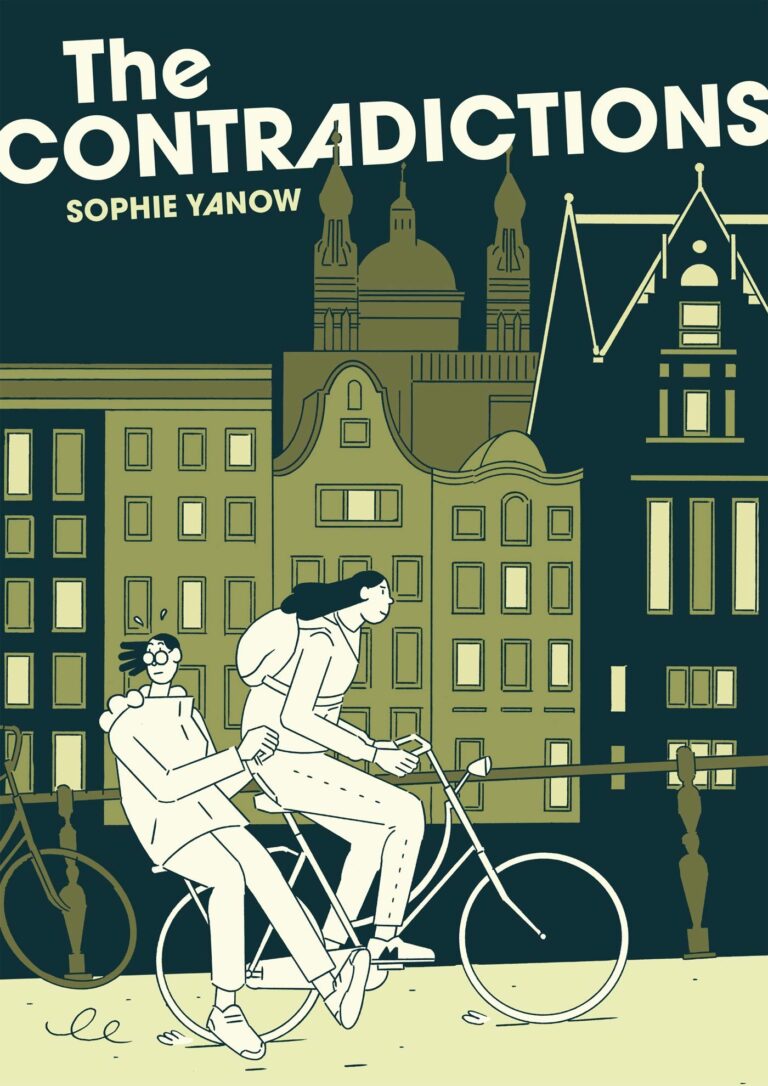 Sophie Yanow’s webcomic The Contradictions is being billed by publisher Drawn & Quarterly, which is now releasing it in book form, as a coming-of-age story. It is, of course, but unlike what that phrase generally connotes, Yanow’s story focuses very specifically on a single stage of the process. Not on an epiphany about life, but the part when it first begins to dawn on the protagonist that she might be wrong about the world and the way it works.

That pre-epiphany is communicated on the last page of the book, and it is done so in the same manner of many of the funniest bits of the book--so subtly and dryly that, were the book’s scenes arranged in a different manner, it would go unnoticed as simply one more scene of dialogue.

Yanow’s comics avatar has just arrived in Paris, where she has fled in, as one of the few panels with narration puts it, “the time after the psychedelics and the critical theory and the breakup.” Despite a single close friend that she regularly eats lunch with, she feels like an outsider among her peers there, her queerness seemingly accentuating how out of place she feels among all the “normies”. When she overhears two girls talking about bikes on the street one night, however, she literally runs toward them to introduce herself as, in her words, “Bike geek might mean punk...and punk… might mean queer.”

That’s how she meets Zena, a New York student that is at once alluring and off-putting. A self-proclaimed anarchist, Zena believes her whole life is “like one fucking loan” and that every cent she spends is debt, so she avoids spending money, and has thus become a prolific shoplifter.

If Sophie is attracted to Zena romantically, she never discusses it or attempts to act upon it. But she’s definitely overwhelmed by and fascinated with Zena, and immediately begins conforming to fit Zena’s particular brand of non-conformity, abandoning her opposition to stealing, deciding to attempt a vegan diet and ultimately disobeying her parents to hitch-hike around Europe on her spring break rather than taking a plane (even though she can afford it).

When given choices, Sophie inevitably chooses Zena over every and anything else, often to her regret. Their trip, which accounts for the bulk of the book, is the most obvious example, and while they have all sorts of interesting adventures on it, it’s also pretty clear that Sophie would have been better off being true to herself and her own interests rather than emulating her exciting new friend.

In that regard it's also a curious sort of coming-of-age story. The Sophie we meet on the first few pages seems to be wiser and on a better path than the one who goes on a trip with Zena, as if the story is a sort of detour into naïveté. But then, that’s the fun part of the book too: watching the character make bad decisions or acting foolishly is the source of much of the humor.

The main character’s social awkwardness is perfectly reflected in Yanow’s style. Her character designs are super-simplified, and built of the most basic shapes: most characters have a circle for a head, a smaller circle for a nose, two dots for eyes and two semi-circles for ears, and they’re always shown in medium or long shot. And yet their heads are too small for their bodies, and the characters have long, large limbs. In many panels, if you squint just a bit and let your vision blur, Yanow's characters look photograph-perfect in their shape and proportions, but many other times they appear gangly and clumsy, awkwardly folding themselves up to fit into small apartments, behind desks or in the backseats of cars. 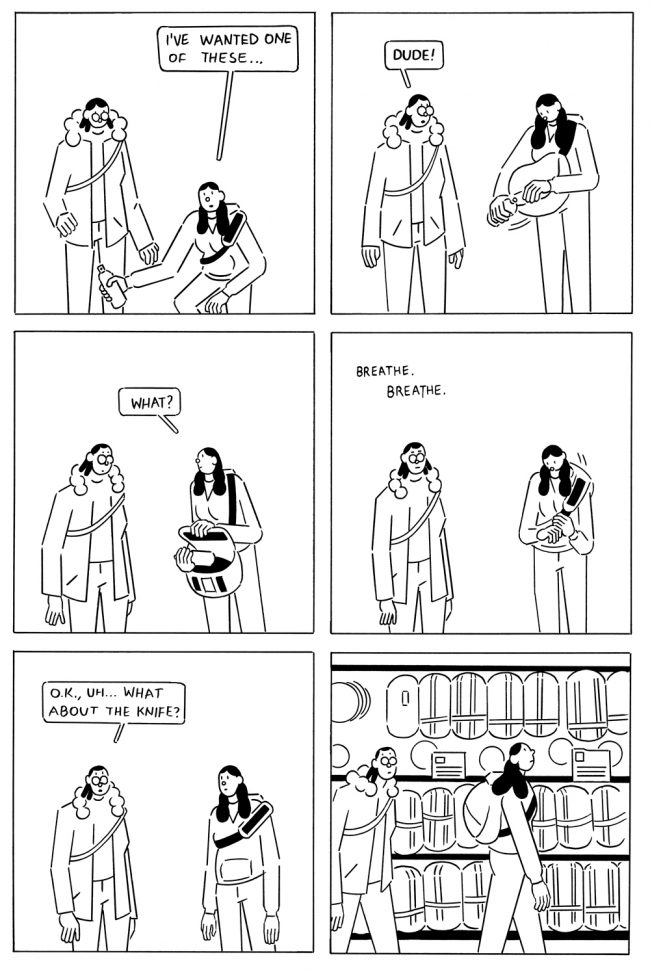 The book begins and ends in Paris, with visits to Amsterdam and Berlin and Belgium in between, but the focus is on the characters, with relatively little panel-space devoted to establishing shots of the cities, or any of the architecture, monuments or street-life beyond what is within a few feet of Sophie and Zena at any moment. These beautiful cities are all rendered in a handful of straight, black lines on white space, and seemingly indistinguishable from one another, or any American city, or any space at all (visually, The Contradictions is more a stage play than a film). That is, of course, in keeping with the focus of the story: Sophie is more interested in her own feelings and in Zena’s worldview than the world around them, and Zena seems most interested in Zena..

The Contradictions isn’t about seeing the sights or how travel broadens the mind, but about our ability to miss out on the world by focusing too much on ourselves. You, a grown-up, have probably already learned that. But it’s still a lot of fun to watch the young Sophie just start to realize it. 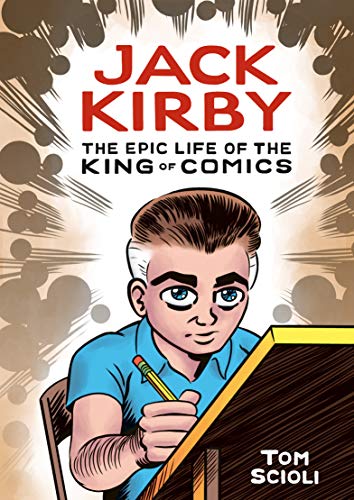 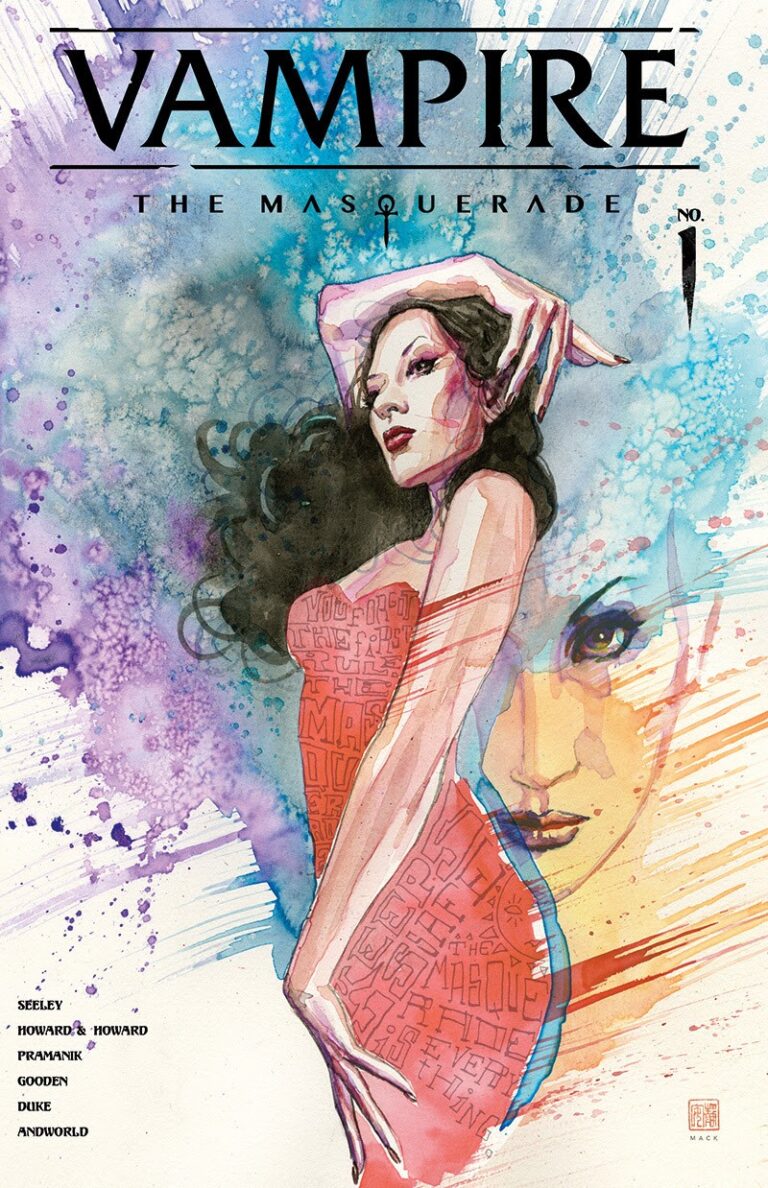