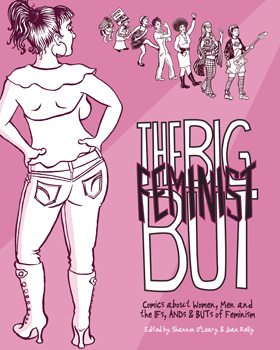 The late '80s and early '90s was a sort of heyday for comics anthologies promoting awareness or raising funds for progressive causes: support for people with AIDS (1988’s Strip AIDS USA, edited by Trina Robbins, Bill Sienkiewicz, and Robert Triptow), pro-choice efforts (1990’s Choices, edited by Trina Robbins), and fighting homophobic legislation (1994’s Hands Off!, edited by Ward Sutton). These were excellent rabble-rousing collections, produced in those fabled, final years of the pre-Internet era, featuring a diverse selection of cartoonists, some of whom had been working as early as the late '60s and early '70s.

The Big Feminist BUT harkens back to those years of comic projects trying to make a difference, along with other recent releases such as Little Heart: a comic anthology for Marriage Equality (2012, 2D Cloud), editor Greer Lawson’s 2013 zine Every/Body: An Open Discussion of Gender and Body, and Anything That Loves: Comics Beyond “Gay” and “Straight” (2013, Northwest Press). Each of these books, with their multifaceted but closely related themes, represent a whole new generation of social issue anthologies. Interestingly, all of them were successfully funded with Kickstarter campaigns, lending them an extra grassroots-y glow.

The Big Feminist BUT: Comics About Women, Men, and the Ifs, Ands and Buts of Feminism features comics touching on a wide spectrum of contemporary feminist issues. The title is a clever play on two familiar caveats: “I’m not a feminist, BUT…” and “I’m a feminist, BUT…” Editors Shannon O'Leary and Joan Reilly make it clear that feminism isn't solely concerned with women’s issues, but rather promoting and embracing gender equality for all. The comics here take on gender roles, sexual identities, body image, marriage vs. singlehood, polyamory, motherhood and parenting, domestic responsibilities, and self-defense and safety, among other subjects. Some creators take a subtle, naturalistic approach (Barry Deutch, Vanessa Davis with Trevor Alixopulos, Joan Reilly w/ Suzanne Kleid), while others are direct, even polemical, addressing feminism head on with all its gender and identity complexities (MariNaomi, Angie Wang, and Andrice Arp with Jesse Reklaw).

MariNaomi's one-panel comic, “Feminist, adj” works beautifully as a sort of mission statement for the book. She first offers the definition of feminism from Dictionary.com: "advocating social, political, legal, and economic rights for women equal to those of men," then asks with sincerity, "Seriously, what kind of person doesn't want this?" then adding, "When anyone claims they aren't a feminist, I assume they don't know what they're talking about." For a book with a bold, witty title like The Big Feminist BUT it seems to me that this piece may have served better as the opening shot; instead it follows the charming slice of life two-pager “Pillow Talk” by Vanessa Davis and Trevor Alixopulos, which matter-of-factly presents the couple as complete equals in a mild, cheerfully gross bedroom argument about coughing and phlegm.

There are several outstanding, very personal stories featured here. I was moved by Lauren Weinstein's "If this is All You Get" which perfectly captures the ambivalence of casting off youthful dreams for grown-up realities (in Weinstein's case, the reality of birthing and raising a daughter). She says her husband sacrificed his own for a 9-5 job with health insurance in order for the family to eat and live, enabling Weinstein to stay at home to raise their daughter (daycare costs being prohibitive). Beautifully rendered and universal in its concerns, the story matter-of-factly notes that both husband and wife must put on hold vital aspects of themselves for the time being, working in tandem for a greater good. Incidentally, it took her nearly a year to draw this four-page comic.

“Am I a Spinster Yet?” is a wryly funny piece of autobiography from Corinne Mucha, providing a compare-and-contrast of the attitudes toward single women in past eras to those of today. In “Marriage is Super”, Justin Hall offers another of his signature stranger-than-fiction anecdotes of officiating at a same sex union at San Francisco’s City Hall while wearing a Green Lantern outfit in order to give the wedding a superhero-theme, just for the fun of it. In Virginia Paine’s “Queer, Eh?” she describes finding liberation by refusing labels of gay, straight, or bisexual, settling on “non-identifying,” while comically wailing that this simple option was previously unknown to her. “Manifestation” by Gabrielle Bell, already anthologized in multiple publications, is an extended riff on Valerie Solanas’s fabled SCUM Manifesto. Bell effortlessly segues from an absurdist autobio satire to a poignant, heartfelt tribute to her mother: “She pushed me into the world neither a girl or a boy, just a big, awkward, ignorant Thing, forcing me to invent myself as I went along. I am deeply grateful for that.” Ulli Lust, author of the tour de force graphic novel Tomorrow Is the Last Day of the Rest of Your Life (2013, Fantagraphics) teams up with her PT lover Kai Pfeiffer for the spiffily titled “Her Fat Feminist Ass”, injecting a welcome bit of hot sexuality in this tale of their polyamorous adventures, complete with cuckolding scenarios. Even in this day and age it’s refreshing that it’s Ms. Lust and not her boyfriend who instigates their randy adventures. In all of these stories there is a sense of paradigms shifting and boundaries melting, with fresh possibilities springing forth – feminism in action. 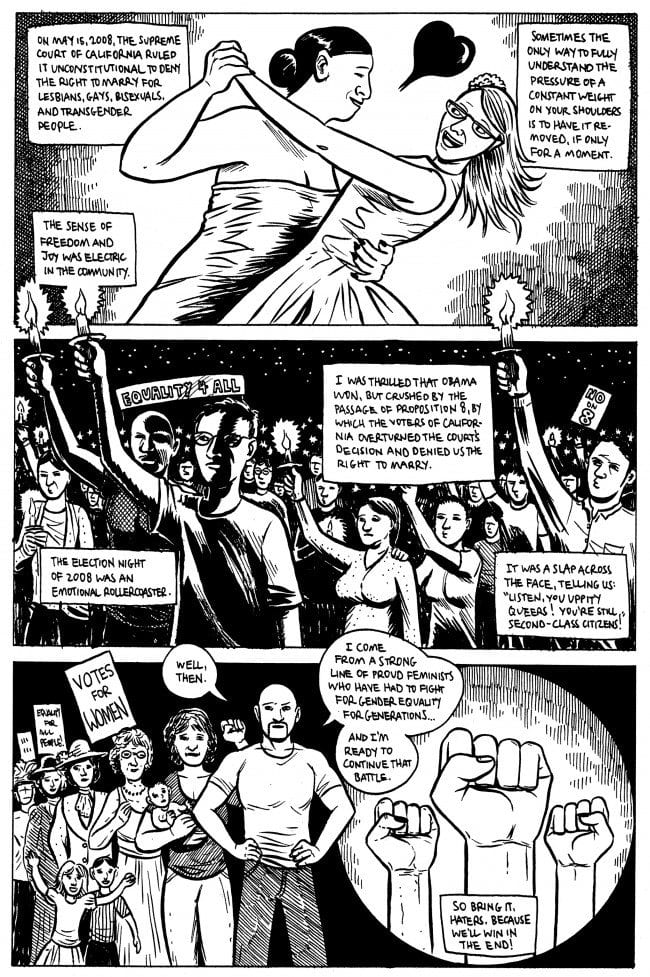 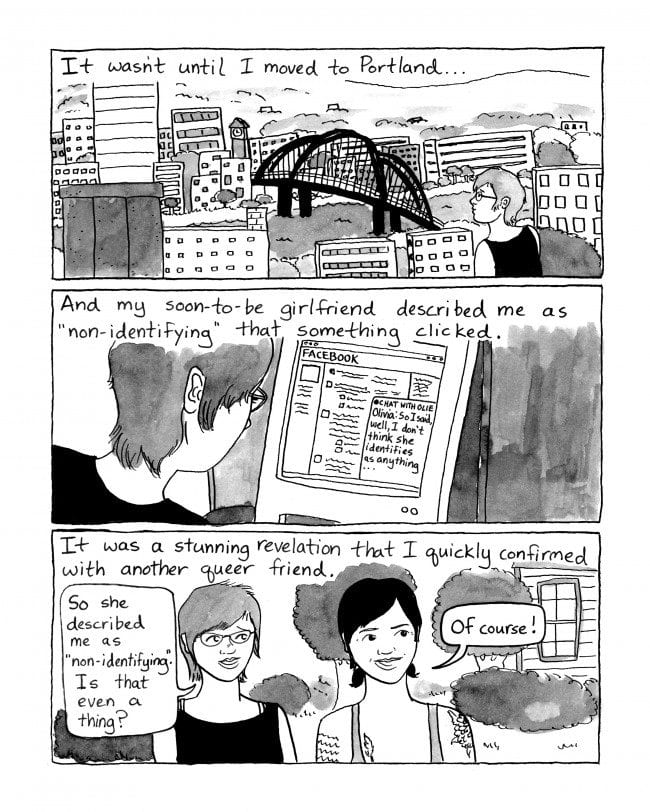 Other stories are less about showing possibilities than facing realities and challenges. For example, in “Boy’s Life”, Andi Zeisler offers a humorous, if sobering, examination of the “diminished expectations for boys” – i.e. a culture in which men are still not expected to be able to handle changing diapers without confusion and Adam Sandler’s moronic, overgrown fratboy movies make a killing at the box office (by the way, Zeisler rightly does not confine her criticism of gender-sterotyping to the male role). “The Dead of Night” by Dylan Williams is a stark, moody period piece in which a 1930s cleaning lady enjoys a brief moment of sisterhood with a harried female office worker, all the while knowing her place in the office caste system (i.e. at the bottom). Suzanne Kleid’s “Eminent Victorians”, illustrated by Joan Reilly, is a fine New York story of a woman simultaneously navigating real estate issues and a primary relationship, with neither ultimately working out – pretty much the way things fly in New York (trust me - been there). Meanwhile, “Pixie”, by Charlie Jane Anders and Britt Wilson, launches as a lighthearted sci-fi fantasy about a woman who gets herself shrunken to better hide physical imperfections. It concludes on a dark note, pointing out that the quest for perfection can lead to exploitation, with the exploited sometimes oblivious to or even colluding in her fate. 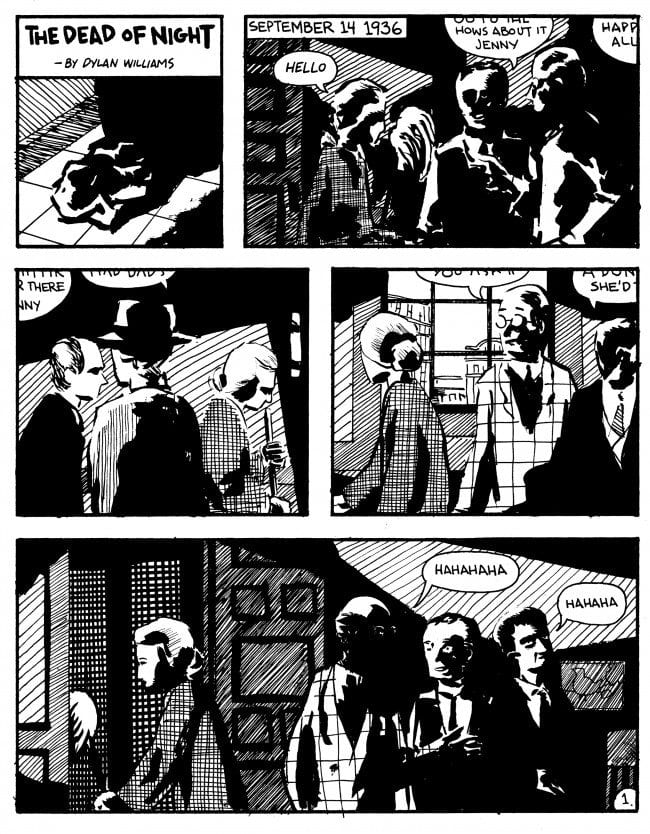 As in most anthologies, not every entry hits its mark; there are weak spots in either art or story here and there, but overall this is a smart, solidly edited collection that will hopefully spark further discussion and give feminism the little boost it needs every so often. Other than the placement of the two opening pieces, I found the sequencing of the rest of the stories without fault, the editors ensuring that ideas and themes flow smoothly and cohesively. The closer, a six-page jam by Andrice Arp and Jesse Reklaw, features the former couple having a lengthy discussion of feminism, including defining its philosophies and history as well as their own experience of the term. They even discuss their own comic, in effect summarizing many of the subjects previously discussed in the book. As Arp states: “Women and men talking about feminism, to me, is much more interesting than just throwing a bunch of women together and assuming the result will be a feminist statement.” 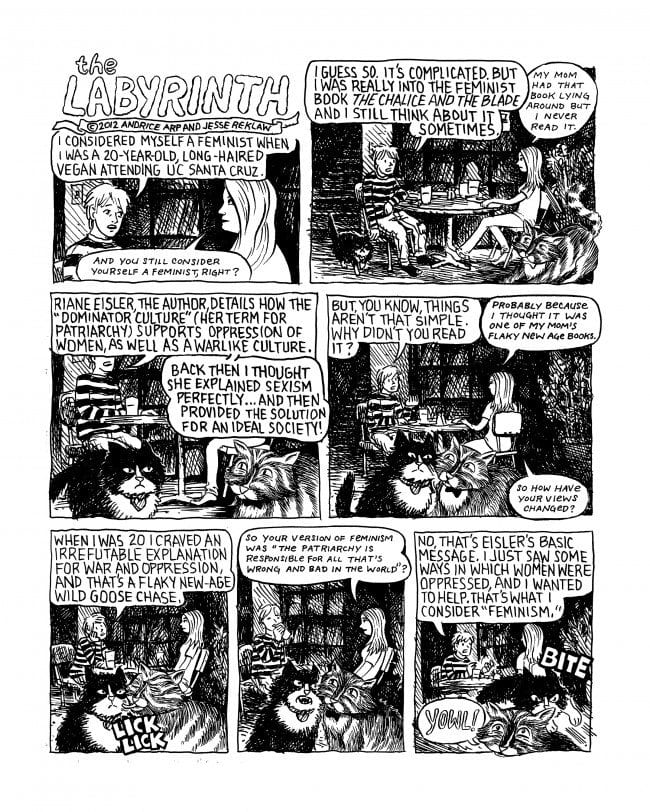 I couldn’t be happier to see the emergence of this new mini-cycle of social issue-oriented anthologies like The Big Feminist BUT. What makes this all the sweeter is the intelligence and care with which these books are produced, increasing the odds that people will find and read them, find inspiration, and perhaps even a notion or two that might challenge preconceived notions - feminism in action. 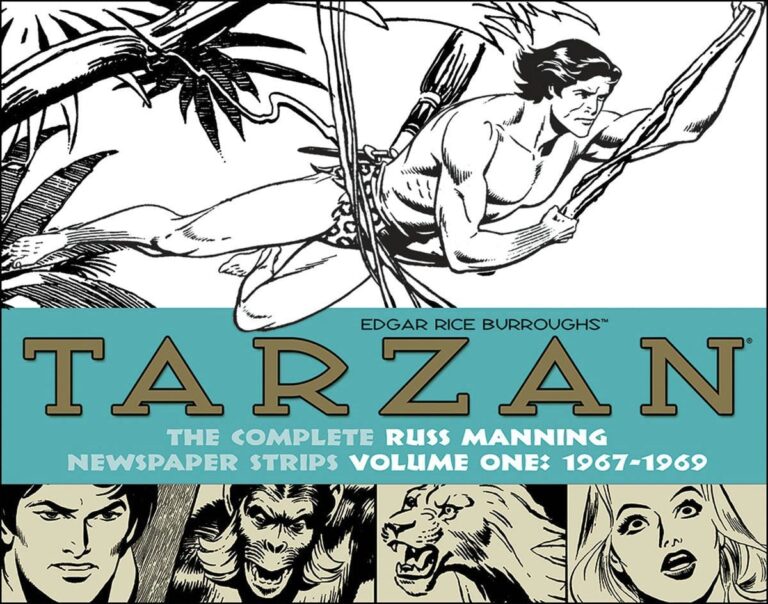 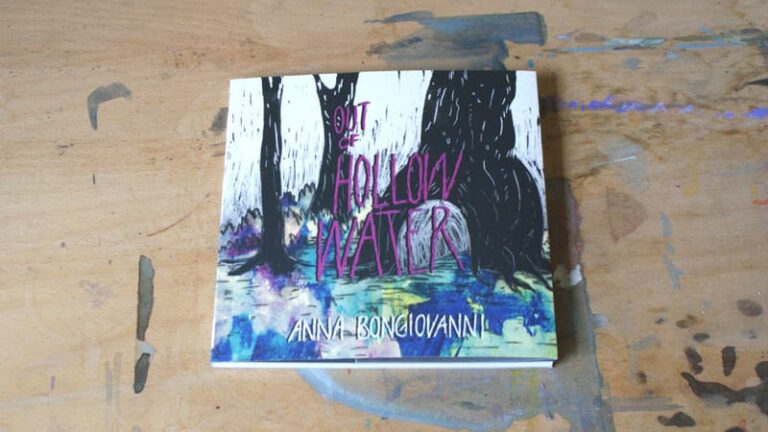