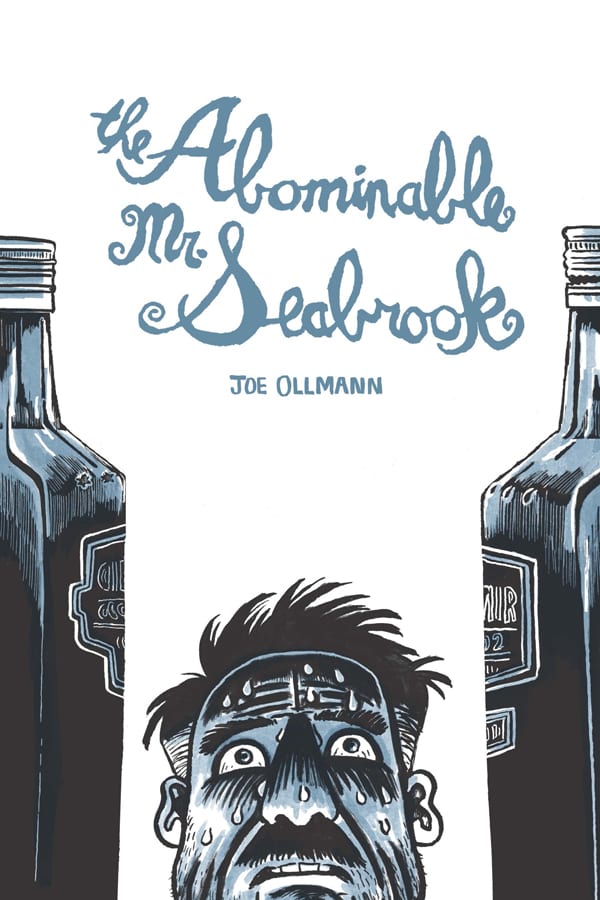 It’s obviously a bit of an overstatement, but graphic novel biographies tend to largely be cursory affairs, providing little more than a basic outline of a celebrated or noteworthy individual’s life. Think Freud by Anne Simon and Corrine Maier, The Adventures of Hergé, or Rick Geary’s biographies of Trotsky and J. Edgar Hoover. That’s not meant as a slight; many of these works provide an enjoyable and informative overview, perfect for readers curious but unfamiliar with a historic figure. But for whatever reason (the large time investment involved in making comics being the most likely suspect), most comic book biographies serve more as an introduction than a definitive edition.

That’s not the case with The Abominable Mr. Seabrook, Joe Ollmann’s ambitious biography of the largely forgotten writer William Seabrook. Having spent years sifting through not only Seabrook’s many books, but also his letters and other research materials, Ollmann provides a surprisingly in-depth examination of the author’s life and character.

I was completely unaware (as I suspect most of you were) of Seabrook’s existence before reading this biography, but it’s easy to see why Ollmann was drawn to him. He not only traveled the world and wrote about non-Western cultures with (for the times) measured respect and appreciation, he also dabbled in the occult, hobnobbed with famous folk like Man Ray, was a horrible alcoholic, had a predilection for BDSM, committed himself to an asylum, and wrote about all of this in a confessional manner that would make the most shameless autobiographical cartoonist squirm with envy. Oh, and he once ate human flesh.

More to the point, he’s also, as I noted earlier, largely forgotten, at best a footnote for introducing the word “zombie” into the American lexicon. Ollmann seems fascinated by how such a unique literary figure as Seabrook, who at one time was quite well-known and well-regarded, could sink into obscurity. And if Seabrook’s descent into irrelevance should conjure any thoughts of the myriad number of worthwhile cartoonists that have been forgotten or discarded by the passage of time, well, I’m sure that’s just a coincidence. 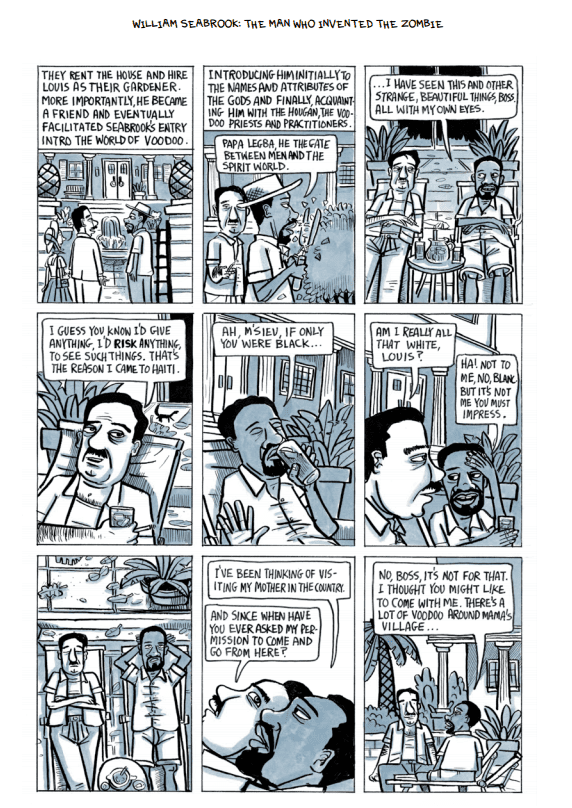 Seabrook also happens to fit in rather well with the sort of fictional characters Ollman has pinned wriggling to his comics page in such books as Science Fiction and Happy Stories About Well-Adjusted People: Smart, sensitive folks who become consumed by their own obsessions, predilections or just plain bad luck. To rehash an old cliché, if Seabrook didn’t exist, Ollmann might have had to invent him.

And it’s Seabrook’s self-destructive nature that seems to fascinate Ollmann the most. He ascribes Seabrook’s long, slow decline to an inability to settle down, prompted by a fear of success and stability, which drives him to run from job to job and responsibility to responsibility until, eventually, he takes up residence in a bottle.

While clearly admiring Seabrook’s sense of adventurism, respect for foreign cultures, and general charm, Ollman is critical of Seabrook’s treatment of his various wives and friends, and even calls into question some of his motives. For example, he takes Seabrook to task for trying to add a veneer of legitimization to his sexual preferences by labeling it under the guise of “psychic research.” 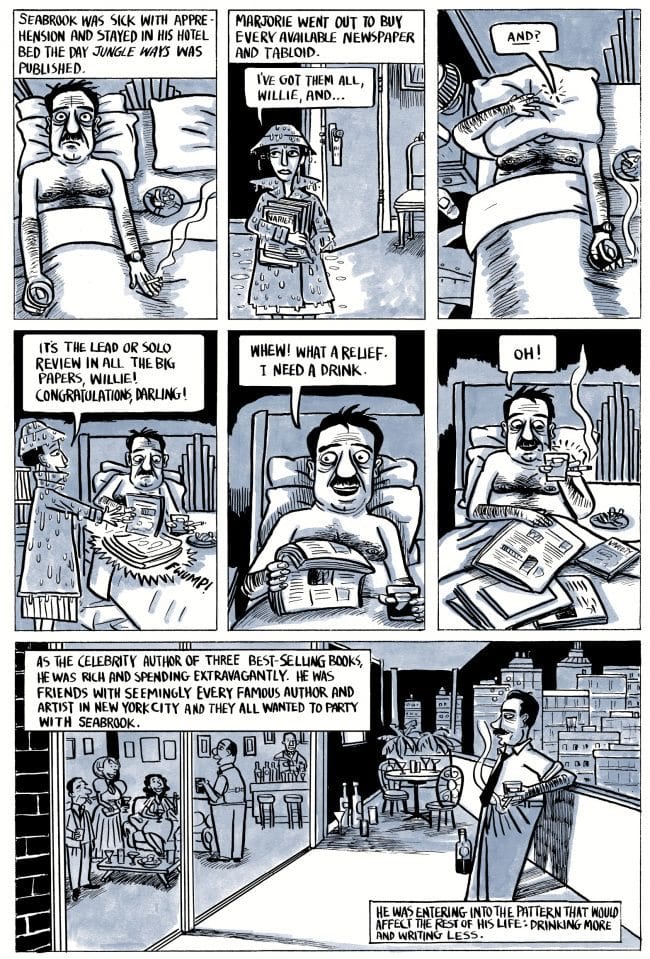 Ollmann’s narration guides the reader throughout the book, providing analysis, citing contradictory quotes, pointing out discrepancies and offering background and detail whenever possible. All in a methodical nine-panel grid format that he rarely ever wavers from (I only counted two splash pages in the entire 300-plus page book). The dedication to format makes sense for the “and then this happened” type of story Ollmann is telling, but the narrow vertical panels, combined with the grey-blue wash that he suffuses in every panel, draw the reader into the book’s rhythms until they feel swept along into Seabrook’s self-destructive whirlpool.

Despite the impressive amount of research, The Abominable Mr. Seabrook could have taken a step or two outside of Seabrook’s monomania occasionally. I would have loved to have seen some dissents or asides from other travel writers and anthropologists. While the book is critical of Seabrook’s more pandering tendencies, we don’t hear from anyone outside of Seabrook’s circle on how his writings on Haiti or anywhere else might have affected Westerners’ perception of the world beyond their borders. What were the lasting impacts of Seabrook’s travel diaries, beyond merely making him famous? Who, if anyone, did he inspire?

Ollman has long delineated short stories about hapless ne'er-do-wells who fight bitterly against themselves and the world around them. In The Abominable Mr. Seabrook he might have reached his apotheosis. Seabrook might be an unjustly forgotten author, but in Ollmann he has found perhaps the perfect person to bring him back to the public’s memory. 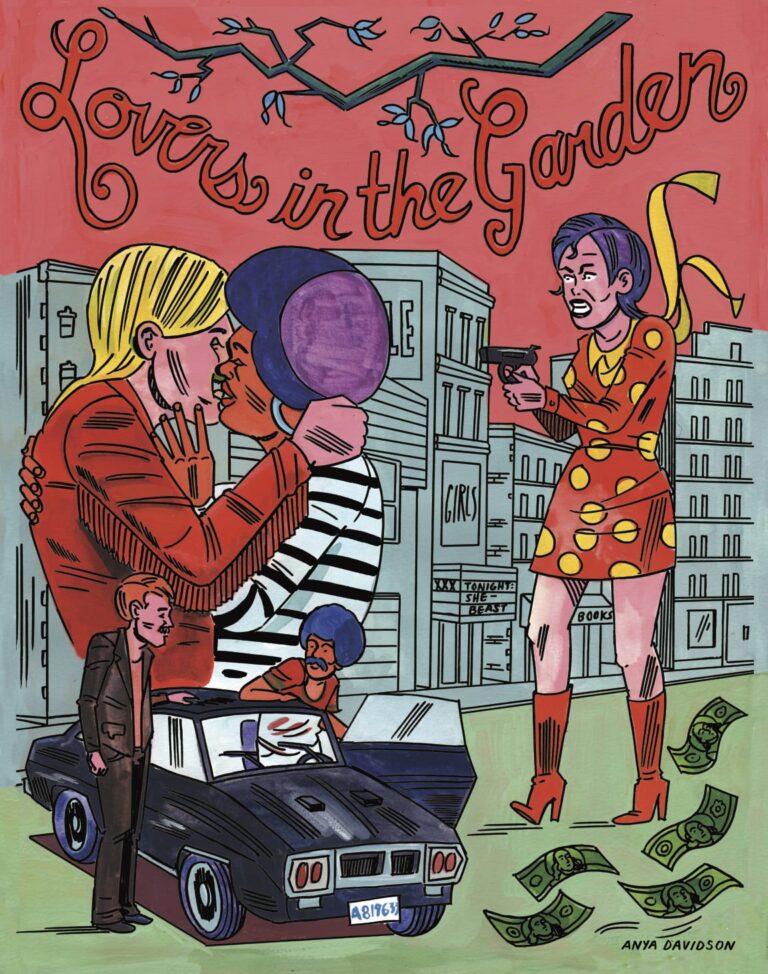 Lovers in the Garden