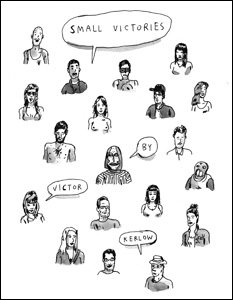 I started reviewing this thing before I even saw it, beginning with the envelope my review copy came in. Cartoonists have a weird way of doing envelopes and if you’ve found one who doesn’t feel free to correct me (I won’t believe you). On a white standard-issue sleeve the hand-lettered address instilled a distinct personality – that essential ingredient I mourn in those computer-lettered comics I return swiftly to the shelf (I am a mute but callous crusader). The text on the envelope was no more or less neat than the bubbles and captions within the black and white comic, so the book felt organic – it felt real because it came from the same place as that envelope. There was nothing forced or affected, deliberately messy or stylized, and the same was true of the images and story: a post-coital scene was pitch perfect in its awkward dismount and absent-minded tit-honk. I don’t mean the stories are all realistic, I mean they lack a veneer of pretension.

Victor Kerlow isn’t sustaining himself by washing dishes in the belly of a restaurant or pinning sad things to the inside of an office cubicle while photocopying comics in his lunch hour: he makes a living doing illustrations for top-notch clients like The New Yorker, The New York Times, and the Criterion Collection, so his scratchy ink and grey wash style should be familiar to most. I only mention it because the cover is so unassuming you might be inclined to think it’s a bedroom production (be it a nicely bound one): it is the carefully paced, subtle work of a guy who knows what he’s doing.

Small Victories is comprised of several short, ostensibly standalone stories. Black Shit Monster is hilarious and surreal: a sarcastic dripping beast rises from the porcelain toilet bowl and says “Hi!” before asking to be fished out. “But you look like you’re made of shit and leaves,” says the man who shat him out in the first place before gently hauling him out like a kid in a bath. The Lumberjack is a completely silent black inky drama but done so well you can hear the snap of a stick, the snarl of a wolf and the thunk of a thrown axe. It’s a great piece of quiet horror, as is Hey Jim, which despite telling you exactly what’s going on in panel one still manages to catch you off guard. Oh Man gives me the impression that Kerlow is the kind of guy who spends and inordinate amount of time pondering the (perhaps malignant) nature of that mushroom sprouting from the gap in the bathroom tiles. Going To Hell, Maybe isn’t a tale of bathroom horror but that slippery tiled room is key in the door of the plot. Did he think all of this stuff up in the shower? Most probably. I’d bet a bunch of coins on it.

Ponda Baba and Fall Apart fell flat with me, though he draws an excellent parrot in the latter. On first reading Oh Somalia it felt like a chapter from another book wedged in to bump up a page count. It didn’t fit. But on the second go round I realised these are (for the most part) quiet stories of everyday horror, be they surreal or totally mundane – domesticity is the thing that binds them, grounds them. The blackened eyes of the portrait couple, the talking heads in Tell Me About Your Father. If you stand back and look at it all, these Small Victories say life is funny and shit and then maybe you look like Patti Smith but then maybe you don’t but who cares. 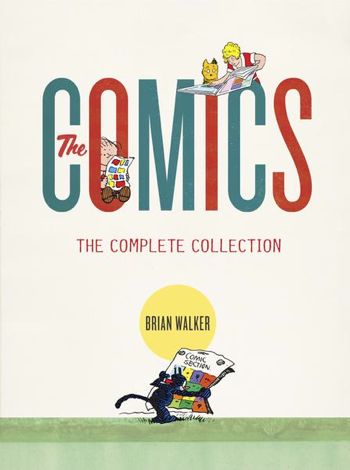 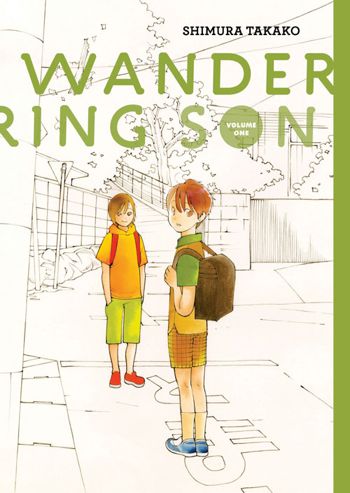