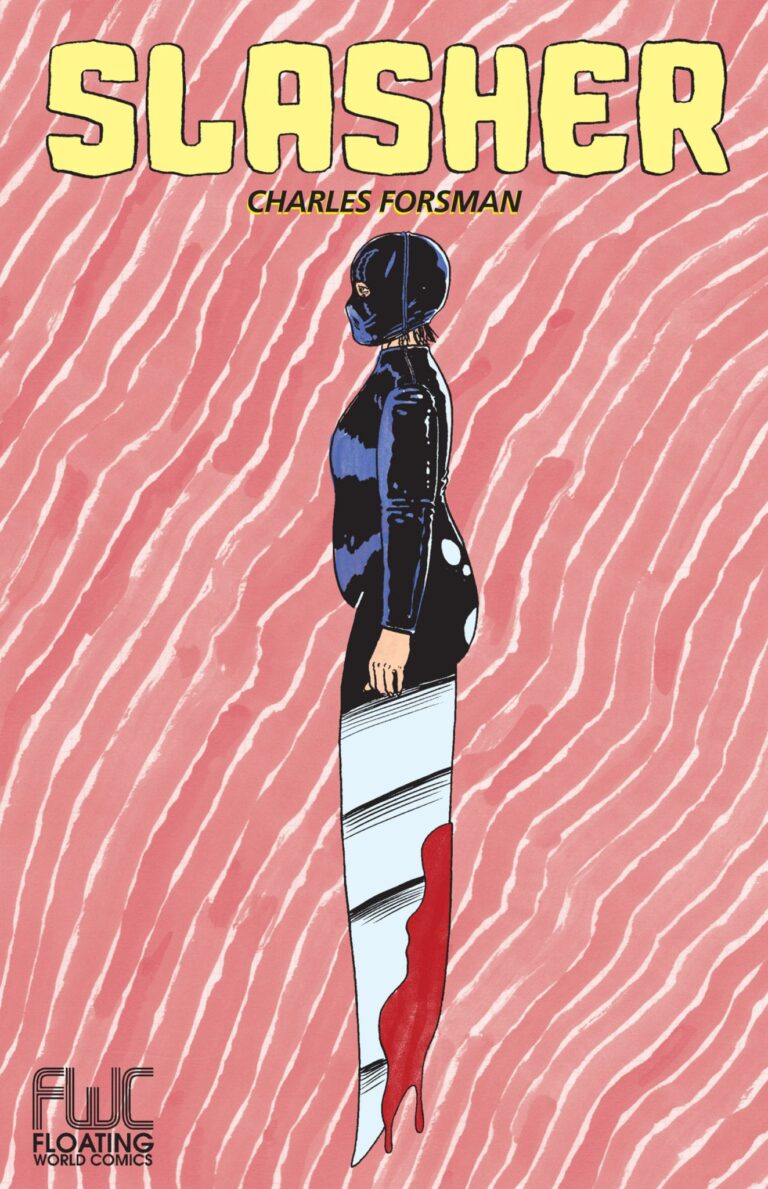 How do we talk about violence in a world so saturated with violence that it takes a body count in the dozens to even make the news? How do we discuss the psychology of violence at a time when the villains of our culture are expected to be calculating psychopaths, and even the heroes are imbued with more than a hint of sociopathy? And, more to the point, how do we portray violent behavior and the way it is formed in comics, whose entire existence for the last century or so has depended on violence as a crucial part of its storytelling language, and even in their more adventurous experiments of late, have run the portrayals of serial killers and lonely brutes so far into the ground they’ve formed their own artistic substratum?

There are ways around the syntax of blood and despair that can prevent a work from being more than just an echo of a language so common that you no longer care to notice it. Charles Forsman, in his latest full-length graphic novel Slasher, finds a few of them, and, if it doesn’t entirely stand up as a way out for him as a creator—or, more importantly, for us as readers—at least gives us some space and time to think about the problem. It is a reiteration (though never a regurgitation) of familiar killer-on-the-rampage tropes ingrained into our common aesthetic experience of four decades; even the name is a tip-off of what we are to expect from the story. But the raw presentation with which Forsman unspools the narrative, both simple and thoughtful, gives it room to go about its task with plenty of air to knock out of us, and it manages just enough in the way of twists and upheavals to give it some depth of meaning, even as its brutality threatens to crowd it off the page.

The book opens with 25-year-old Christine Sobotka, an unassuming data entry clerk, being sized up as an easy mark by her dyed-blond creep of a boss. He will eventually become one of her victims, but this is no predictable I Spit on Your Grave rape-revenge schlock:  Christine’s pathology is deeper and darker than that. She can only get off sexually at the sight of blood. Why?  It’s not really important; the quest for an irreducible meaning behind mass violence is, in life, largely a futile and easily confused effort, and in art, almost never more than a narrative crutch. Forsman wisely doesn’t spend more than a token line or two on the origin of her mania, instead plunging us directly into its expanding consequences. 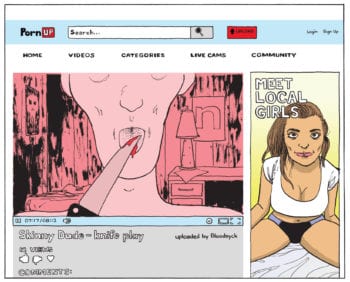 Christine’s sole sexual gratification comes from her interactions with a teenager who posts little-watched videos of himself engaging in blood play on porn websites. (It’s a minor bit of praise for a book that deserves credit for so many other things, but Forsman pulls off a surprisingly rare trick by integrating the internet and social media into a story without it seeming awkward or corny, or calling too much attention to itself.)  His name is Joshua, and she finds herself involved in an online relationship with him; the intensity of it is only exacerbated by the presence of his domineering mother, who practically keeps him prisoner in their home and lets her religious fervor and Munchausen-by-proxy dominate his existence—and by no means secondarily, interfere with his relationship with Christine. Her passion for him is deep and unmistakably real.  What isn’t real is Joshua.

Christine is being catfished, and the fallout of her shocking discovery of that fact forms the second half of Slasher’s narrative. But even before that turn, which seems simultaneously predictable and unavoidable, Forsman draws us into her character so satisfyingly that we wonder about her culpability in the fantasy. We almost inevitably ask the question of anyone caught up in such cases, although we do it quietly and with only our most trusted: How could they have believed this for so long? To what degree do we accept what we are told because it’s what we want to hear? Christine is in a deeply lonely place, saddled with a sexual predilection that is almost impossible to even bring up, let alone discuss in a reasonable way; it’s not at all unexpected that she would respond so positively to the sole voice who understands what she wants and is ready to give it to her. But the stakes are unreasonably high in Slasher. Christine’s kink lies at the very edge of madness, and when she finally carries it over into assault and murder—“I’ve never felt so relaxed,” she texts him after cutting a stranger’s throat; “I know who I am now and you’ve helped show me the way”—it’s compellingly unclear if “Joshua” actually tempted her in that direction, or if his existence merely gave her a justification she always longed for. 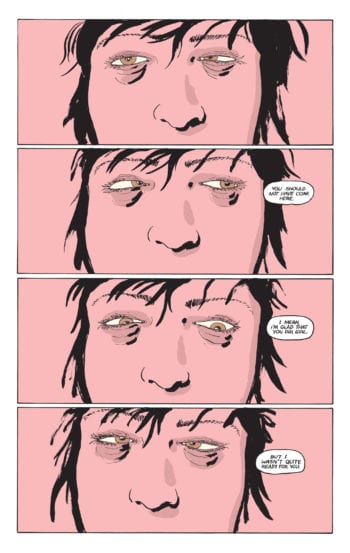 It is in these moments that Slasher is at its best, peering behind the gimp mask Christine buys Joshua as a present to force us to look at a lot of our assumptions about the nature of violence in both life and art. Sexual compulsion as a motivation for murder is pretty well-traveled in a post-Freud world, but rarely are we presented with a character like Christine, who slips artfully past Mr. Goodbar stereotypes to become the source of the threat. Forsman frustrates our expectations throughout: Christine is never entirely a victim, even when she is, and our easy assumptions about her victims are never fully rewarded. Parallel lines are drawn between her broken, dysfunctional mother (with whom she converses about Joshua in the most banal terns) and his imaginary one, but there is no easy through-line other than her own delusions. The story takes on a different character in its final pages, mixing a somewhat clunky police-procedural element with an over-the-top splatter ending, but the failure to know where to go with stories of this sort is not unique to Forsman and he shouldn’t be charged with the task of figuring it out. 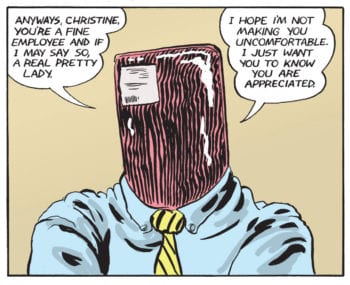 Along the way, though, Slasher plays with our perceptions visually as much as it does narratively. Forsman’s drawing style is simple but never plain, and he presents us with faces seen from angles that are both emotionally informative and grotesque.  He studied under James Sturm at the Center for Cartoon Studies, and while he lacks Sturm’s mastery of clean lines and suggestion of motion, he has a powerful gift for portraying body language that serves Slasher’s themes extraordinarily well. Aside from a few sequences that are ambiguously fantasy, dream, or insanity, Forsman doesn’t take a lot of visual risks here; even the frequent depiction of knife attacks is subdued and strangely quiet. This leaves him with the room to give the most surprising moments a lot of punch, especially the disturbing early panels where the depths of Christine’s mistake in coming to visit Joshua are revealed. (Another moment, early on, comes when Christine, being harassed by her employer, visualizes his head as a package of ground meat; it’s almost hokey, drawn straight from the visual shorthand of old cartoons where hungry castaways see their friends as walking drumsticks and talking ham hocks, but Forsman not only pulls it off nicely, he establishes an echoing graphic metaphor of touching raw meat that will sound throughout the book.) 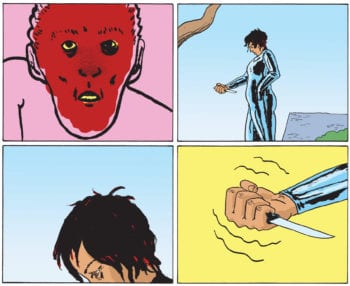 Much like his 2013 debut, The End of the Fucking World, Forsman spends his narrative time portraying characters with deviant tendencies that allow themselves to indulge until the moment that they cross a line that can’t be redrawn. Slasher works well on that level throughout most of its text, and its failure to resolve in a more satisfying way doesn’t subtract from the effort. What’s more admirable here, though, is what’s under that story, and what makes it one of the more challenging books I’ve read recently; it asks us not to merely identify or not with Christine, but asks us why we want to—why we need to—and how much we’re willing to tolerate to understand her and what she does.  It’s a lower level that Forsman never makes explicit, but as the story progresses from empathy to pity to horror and ultimately to something beyond words, never stops supporting what’s above it.  Slasher gives us just enough what, and while it never gives us why, it at least makes us ask. 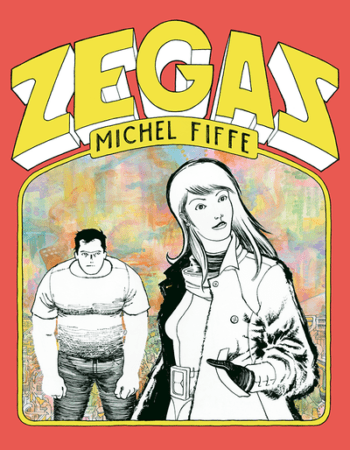 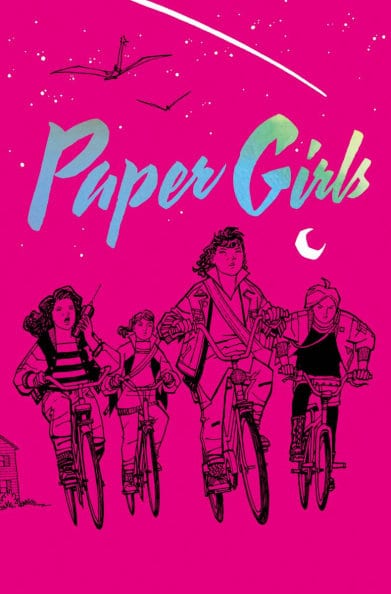