I’ve re-written this review about eight times now. Each time I do, I sound like a kid writing his first live show article for Maximum Rocknroll: “Heather Benjamin is the best cartoonist alive, ever -- and everyone else sucks! She’s the living incarnation of Aubrey Beardsley and everything else I like! Everything else sucks!”

I’ve also been taking her Sad Sex book around wherever I hang out, and people have the same reaction. Folks shut up as soon as they see it, their jaws flip open, they leaf through the whole thing cover to cover, pass it on to the next person, and then announce whether they love or hate it and why, generally at length. It’s great party fun, and cheap at $10, so consider it for your next mixer or family gathering.

It’s been so long since I liked a cartoonist like this, that I’ve forgotten how to write about it. Sad Sex is full of so many complex, primal things, it’s confounding. I feel like I’m staring at stone reliefs of Aztec art, imagining what its language of art might be saying with its particular horrible and sadistic genius, and then making up my own story because I don’t know. 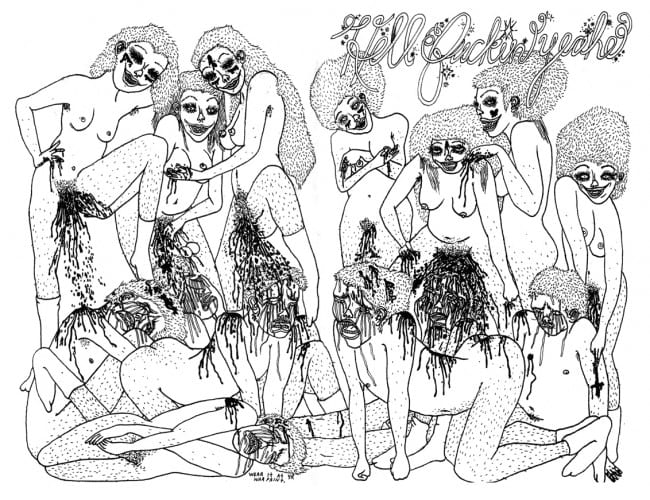 But honestly, this review is also hard to write because her art is largely about a young female perspective on sex, menstruation, sadness about sex, and why sadness about sex is also kind of sexy and funny. And if there’s anything I’ve learned as an aged male, it’s to SHUT UP whenever women start talking about this stuff. You figure that out by the time you’re 13 – women do not want to know what men think of menstruation. They’re never going to sponsor a lecture series called “Men Writer’s Perspective on Menstruation – 5 New Male Voice Speak Out” at your local university. No way.

So, I asked my friend Dame Darcy to help me review this, because I love her perspective on art and women artists, and also because her early work in Meatcake and Rollerderby magazine had a savage, crazy electricity that reminds me a little of Benjamin’s. (I was also one of Darcy’s assistants in the late ‘90s, along with Matthew Thurber and a couple other lucky individuals.) At worst, I hope, this’ll read like one of those long rambling interviews in Maximum Rocknroll – always my favorite part.

I should also maybe say that I was introduced to “Sad Sex” by Thermos Unigarde, the founder of experimental female musician’s group LOXM, who carries around a copy of “Sad Sex” in her custom-made oscillator case and calls it her “talisman.”

So anyway, here’s the interview:

Dame Darcy: I love Sad Sex. But I’m also just going to say: “I’m sorry, Heather Benjamin.” [Sad laughter.] Because I know how she feels — totally ruined — and that things being totally and utterly fucked up are inevitable. 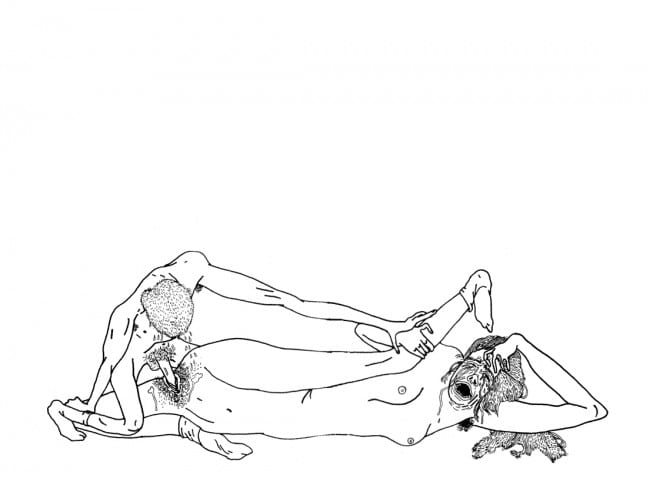 Me: It reminds me a little of flipping through Rollerderby.

Darcy: It is a little bit Rollerderby – very bipolar, and also very borderline personality order. Bipolar because Sad Sex is about extremes, extreme happy and extreme sad. Extreme drama, crashes and emotional mood swings. Being borderline is when you really love somebody and then you instantly…really hate them! And it’s kind of the same, it’s like a flip of the coin.

Me: Yeah, just go back and forth?

Darcy: Yeah, love … hate! Love…hate! Back and forth! I was afraid I had that…I don’t think I have that too bad though. But maybe I’m crazy. I definitely have a mild form of narcissism. (Laughs)

Me: Do you think that’s what all artists have?

Darcy: I think all artists have narcissism, that’s just part of the job. Artists shouldn’t breed. I think it’s a bad idea. Because when you’re a narcissist, you’re a bad parent. You have to be like Jesus to be a parent.

Me: As a parent who hangs out with other parents, I can tell you that doesn’t happen.

Darcy: I want to know, if you were a single guy going out with Heather, and you thought Heather was cute, after you read Sad Sex, would you think, ‘This girl’s been traumatized by sex, uh oh, let’s wait a while.” Or would you think, “Oh goody, this is sexy!” [Laughs.]

Me: I guess I would be encouraged that she thinks about sex, that’s nice.

Darcy: But there’s a lot of freaking and out and crying involved!

Me: Yeah, but at least she thinks sex is really exciting. It’s a plus.

Darcy: She feels highly emotional, and here’s the other thing: I should vent something, particularly for Heather.

I was reading that if a man and a girl have sex and walk away from each other, the girl has ten times the endorphins of the guy, after the sex. So the girl is more biologically programmed to be attached to the guy. While the guy isn’t a reciprocator of the energy and just isn’t programmed to care as much. I’m not saying that guys don’t care, I’m just saying … biologically.

Me: But endorphins are pleasure, that’s what helps you enjoy sex. That’s why people take E. You want women to take a pill to feel less pleasure after sex?

Darcy: Well, I think girls should take an endorphin blocker, so she feels the same as the guy.

Me: No one would take that.

Darcy: Well then, girls would feel like guys do.

Me: Why would you want that? If you have more endorphins, you feel better. How do you know you wouldn’t lose interest in romance and art and just end up playing war video games, if you felt like a guy? Driving around video game tanks? 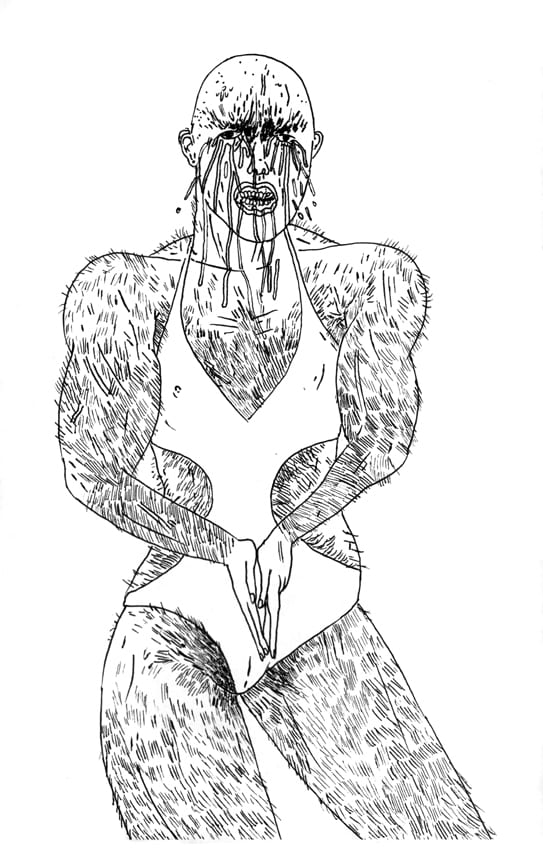 Darcy: I love Sad Sex’s bodybuilders. She did a really good job with the bodybuilders. Also, I love “YOU MAKE ME FEEL SPECIAL!” So good.

So, she just needs a hug. I would like to give Heather Benjamin a hug. I wonder what sign she is. I feel for her. 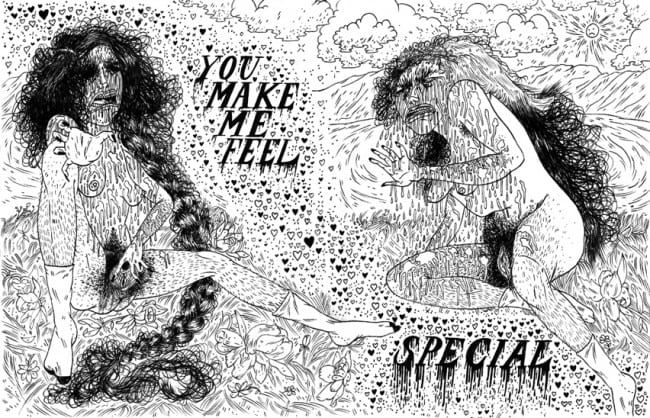 Darcy: Her work reminds me of Mike Diana’s.

Me: She says she’s a big fan of Mike Diana on her blog. They were in an art show together recently.

Darcy: That’s rad. I remember seeing him for the first time – he and Kembra Pfahler were playing around town, doing these hilarious little shows. And from his work, I expected him to look like a freakish horrible guy…

Darcy: But instead he looked like a pretty little boy with blond hair in a go-go dancing sailor costume, the faggiest thing I’ve ever seen in the world, and he was super-nice and super-quiet and cute and shy and and weird and pretty.

Me: All the ladies liked Mike Diana back then. The first time I saw him, he was go-go dancing at Squeezebox while Vaginal Crème Davis was playing.

Darcy: So anyway, that’s where I saw him, and being surprised at all the pathos coming out of this pretty person. Her stuff reminds me of that. And he was having that horrible publicity… but Oscar Wilde says there is no bad publicity…

Me: He had to leave Florida though, because of it.

Me: So maybe she’s not all messed up, maybe she’s a Mike Diana fan, and art like his, and that informs her style…

Darcy: She doesn’t draw like this because she’s a Mike Diana fan. This is coming from her actual psychotic brain, her art. Not that she’s… I’m sure she’s fine. I’m sure she’s a really awesome person. I’m glad that she’s able to draw, because if she wasn’t able to draw, she would be bottling this up, and probably going bananas. But because she can draw, she can render these images, it probably helps her emotionally.

Me: Isn’t this a fetish, ritualized crying? Maybe it’s something that people like, an aesthetic? It’s just a type of thing she’s into?

Darcy: No, I think “Sad Sex” is just how she feels. I think she gets too emotionally attached with somebody when she has sex with them and then feels vulnerable, and because she feels vulnerable, starts going crazy and feeling really sad. Maybe she had some relationship issues with a parent before, and then started doing this stuff. I think that it’s better that she’s doing this, expressing herself, and being an artist, and turning the coal of her pathos into diamonds, I think this is a good thing to do, it’s the pure essence of what art is. And I really hope she gets to a place where she can be okay with herself and do her art. Maybe she’s already there? I don’t know.

Darcy: Anyway, our friend here, Heather, seems like someone who would fit right in with the early ‘90s in New York.

Me: She does, right? Why would you say that about her, and not someone else who’s drawing now?

Darcy: I think just the unabashedness of the punk-rockery in her art. It’s just really good. It’s good. I think I used to be a little bit more like Benjamin in the early ‘90s too. I used to draw really, really weird shoes and costumes. I love these shoes on the cover. I’m just trying to be more positive these days…

Me: You feel more positive now?

Darcy: Nuh-uh. I’m TRYING to feel more positive now. What was happening then, was I was always walking around feeling like I was about to explode in a blood bomb. Pain and anxiety. I always felt like that, and my art was just reflecting that. Meatcake was just about how I feel crazy and sad and horrible, and I’m just going to draw this because I can’t stop myself. If I don’t draw this, I’ll explode. That’s what I was dealing with, and so does she.

One of the reason I wrote Hot Witches was I felt like her, all the time, when I was younger, and then I thought maybe I could save younger people from going through twenty years of torture and pain.

But Heather’s being very true to herself in her art, and if you’re true to yourself, you’ll find a place in the world. There’s also sort of a raw passion, how she feels and who she is, what she’s thinking – it’s really good. I like Sad Sex a lot.

Me: Heather Benjamin's Sad Sex is the cat's pajamas. 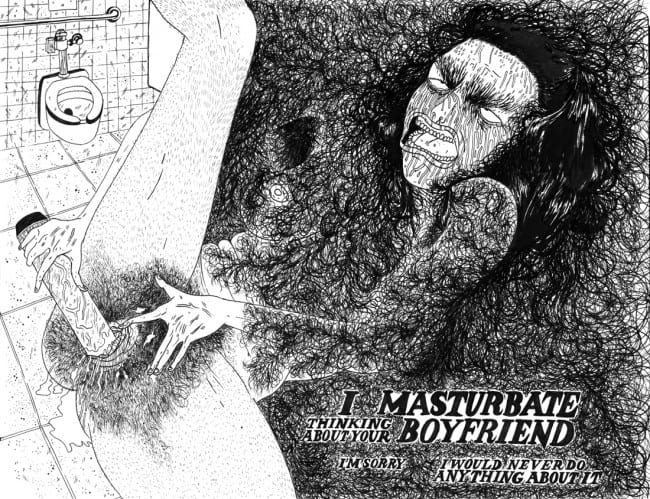 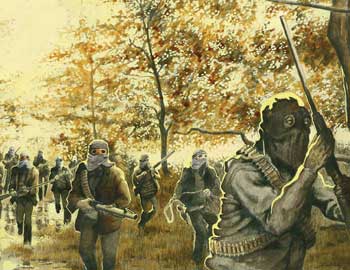 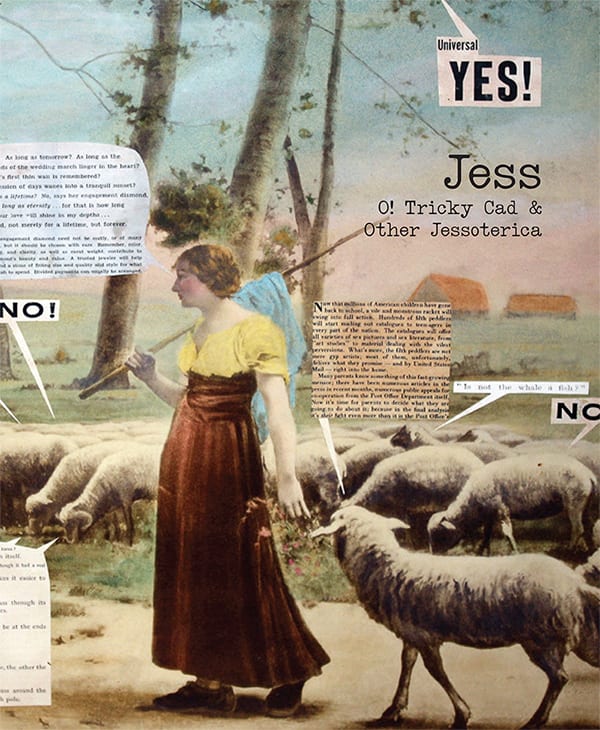