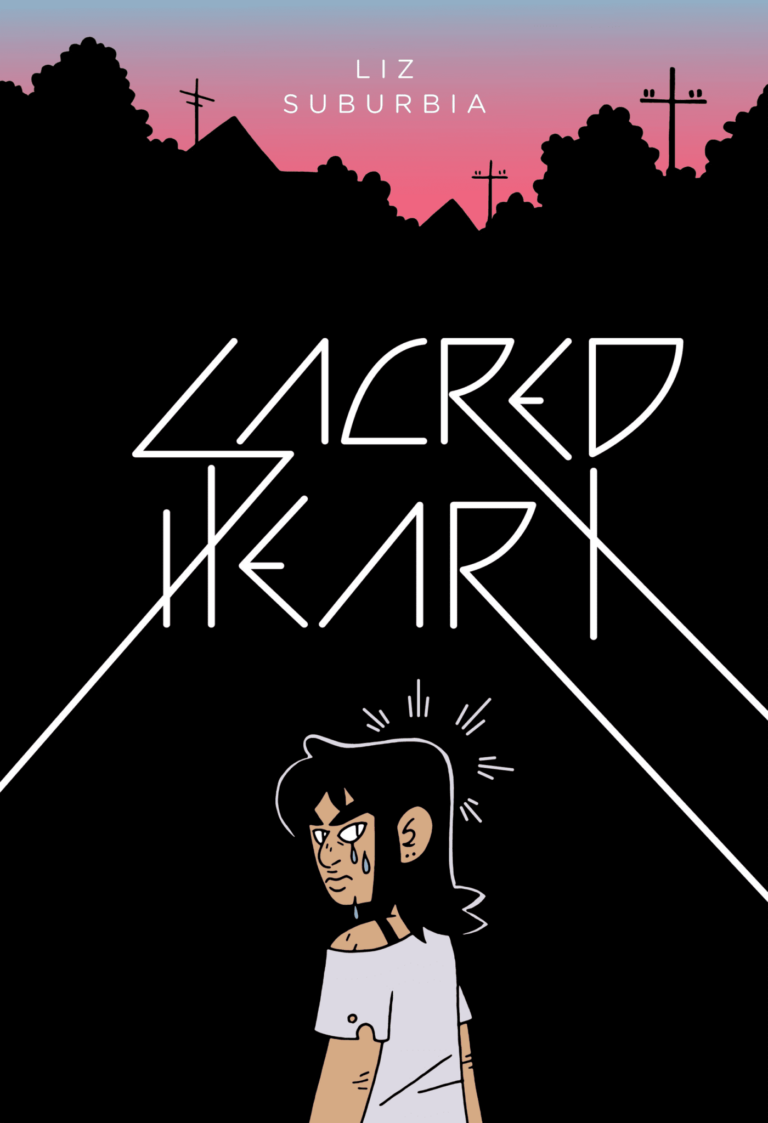 The best way to read Liz Suburbia's book Sacred Heart is to never stop asking questions about the details. Unlike many creators of art about teenagers that focuses on them to the exclusion of adults—or even touching on their absence, Suburbia immediately but subtly alerts the reader that something is not quite right from the very beginning of a story that otherwise focuses on teenage punk rock, romance, sex, rebellion, drinking, and free expression. The book's promotional materials link Suburbia to Jaime Hernandez and Brandon Graham, and for obvious reasons. Hernandez captured a certain era of punk and painfully real relationships in Love and Rockets, and that's certainly present in Sacred Heart. Graham draws a lot of inspiration from graffiti and street art, and one can see that at work here as well, as well as certain shared visual traits: facial exaggerations like thick eyebrows and a certain sharpness in the way Suburbia draws eyes.

However, after finishing the book, I find that it bears the most similarity to Gilbert Hernandez's Palomar work, especially "Human Diastrophism". Suburbia's art has a denseness and atmosphere similar to Beto's, there's a subplot about a serial killer, and the characters are dealing with supernatural forces and events they can't quite understand. She spots blacks much like Beto does, adding a density to even the frothiest of scenes as well as a sense of dread. At the same time, Suburbia's art has a playfulness to it with little eye-pops here and there, especially when Ben's dog is involved. There's an element of Lord of the Flies to be found here; there's the danger that a town where teens and children are the only people left could lead to a Hobbesian nightmare of might making right. 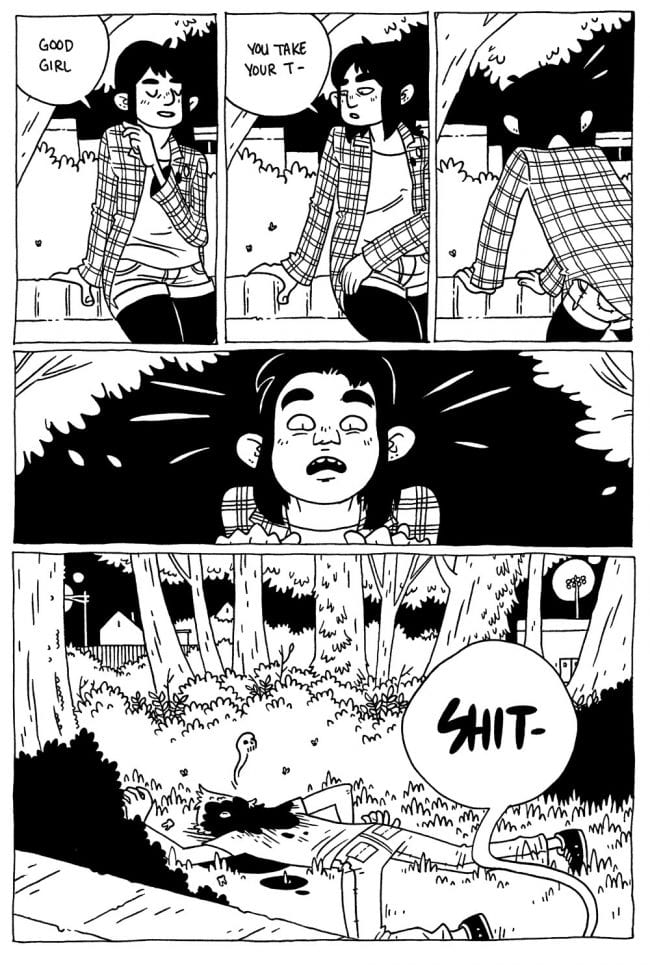 What makes the book so effective is that it's not really about the absence of adults. It's touched on from time to time, but their absence isn't explained until the very end of the book. What the book is about is the way that meaning is sought through human connection, and Suburbia introduces a vast cast of characters muddling through this real mystery. The book's central character is Ben, a cynical and smart girl who nonetheless has a crush on the quarterback of the football team. Her best friend is Otto, a pervy boy who spends much of his time hanging out with her while complaining about his girlfriend Kim. The first chapter establishes their friendship along with Ben's problematic relationship with her sister Empathy, who disappears for days at a time. It also reveals the book's first murder. Suburbia somehow manages to balance the mundane (yet important to them) concerns of the teens with the actual weirdness of the book's events in this chapter, setting the tone for the rest of the book. In a memorable three-page sequence, night falls on the town as we are introduced to what's happening to the rest of the cast. Some are sleeping, some are having sex, some are taking inventory on supplies, some are simply bored, etc. 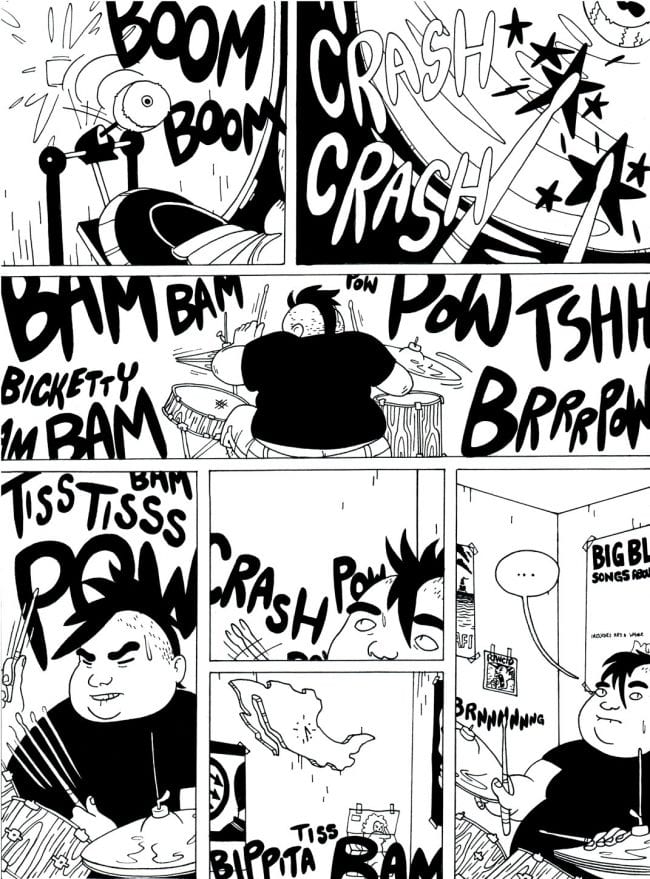 Suburbia has a gift for teen dialogue and interactions, and she builds her narrative through small character moments. We are introduced to the local band The Crotchmen and the sexual politics surrounding them and their lead singer, who seduces the much younger Empathy. We see the kids interacting at a party and see Ben heartbroken when she sees her crush getting a blowjob from another guy. We see Empathy making mincemeat of her opponents playing field hockey. Kids get drunk (getting their supplies from an older teen named Jack Brown who mysteriously has dominion over the town's provisions) and make bad choices. And the body count slowly begins to rise. There's one scene where a random adult appears on the street (a medic of some kind), but he runs away from Ben when he sees her. 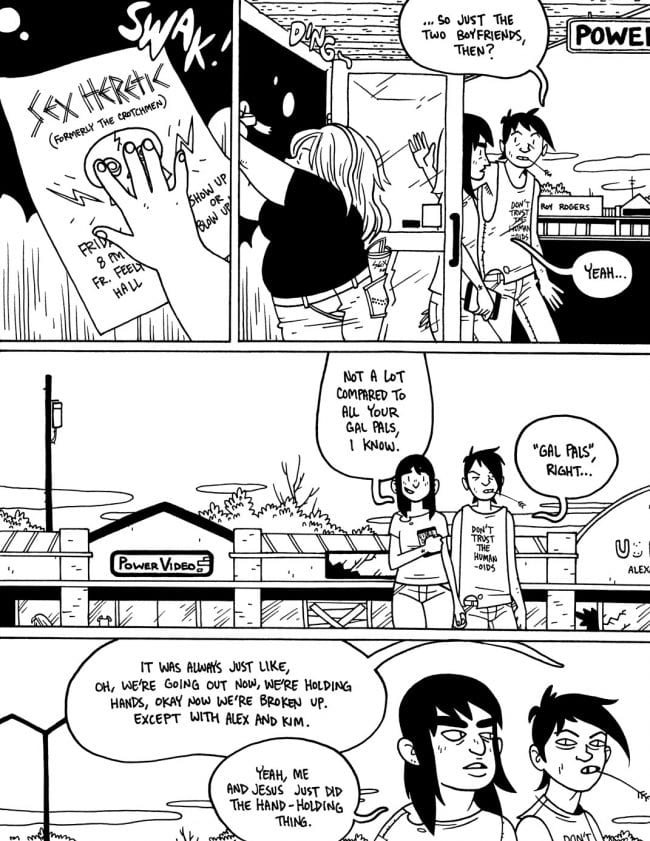 The book takes a turn when Ben and Otto start to date, turning Ben's attention away from her sister. The way Suburbia depicts this new relationship is painful, as the early sexual thrill gives way to neediness on Otto's part, and the revelation that he's more into her than she is into him. When the lead singer of the band is the next victim, he's replaced by a force-of-nature character named Jenna who rocks a million times harder than the previous singer--in part, because he was just trying to get laid and she just wants to blow minds. Her character design is perfect: a full-figured, powerful presence not unlike Beth Ditto, who plays a set with the band that can only be described as apocalyptic. Jenna is pretty much the embodiment of the stripping away of macho bullshit, something that Suburbia herself accomplishes throughout the book. 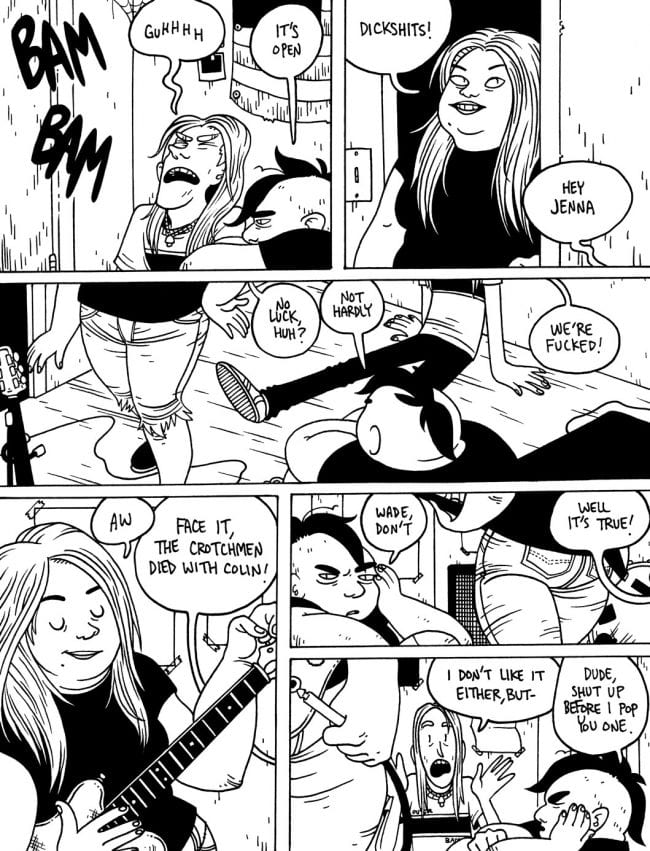 Throughout the book, there are details that slowly reveal that the parents of the children in the town all left. We also learn the identity of the killer, a revelation that took me entirely by surprise even though the evidence was there all along. Some handy misdirection on Suburbia's part keeps that mystery up until the end and reveals precisely what kind of psychic damage that the presence but especially the absence of the parents in the town did to the children. Suburbia specifically plays on the tropes of teen comics like Archie and films like Dazed & Confused, ones that amplify the already self-centered feelings of teens, in order to hide the impact that the adults leaving the town (and telling their kids to wait for them) have on them. The verisimilitude of the dialog, the familiarity of the settings, and the authenticity of the teens' concerns and interests are remarkable precisely because they are desperately trying to determine what "normal" is for them, without any limits or restrictions. The way in which Suburbia effortlessly blends other genres into the mix only serves to enrich and broaden the central emotional narratives that make up the core of the book. 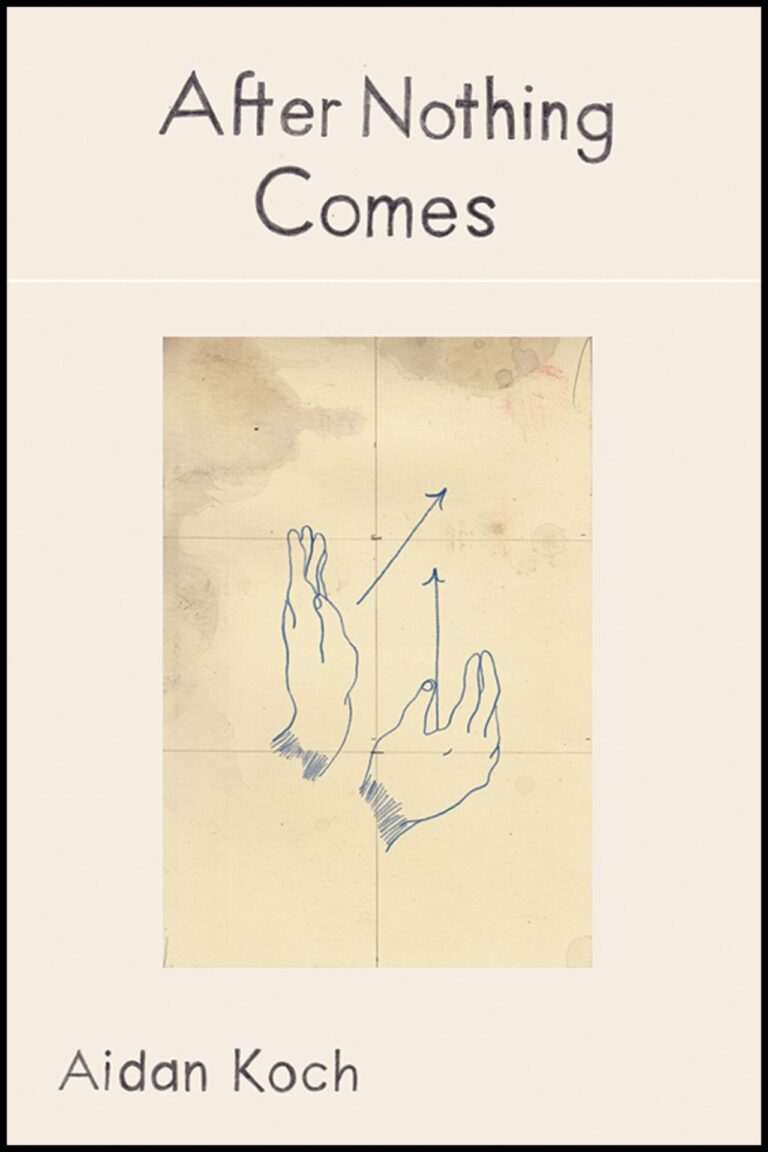 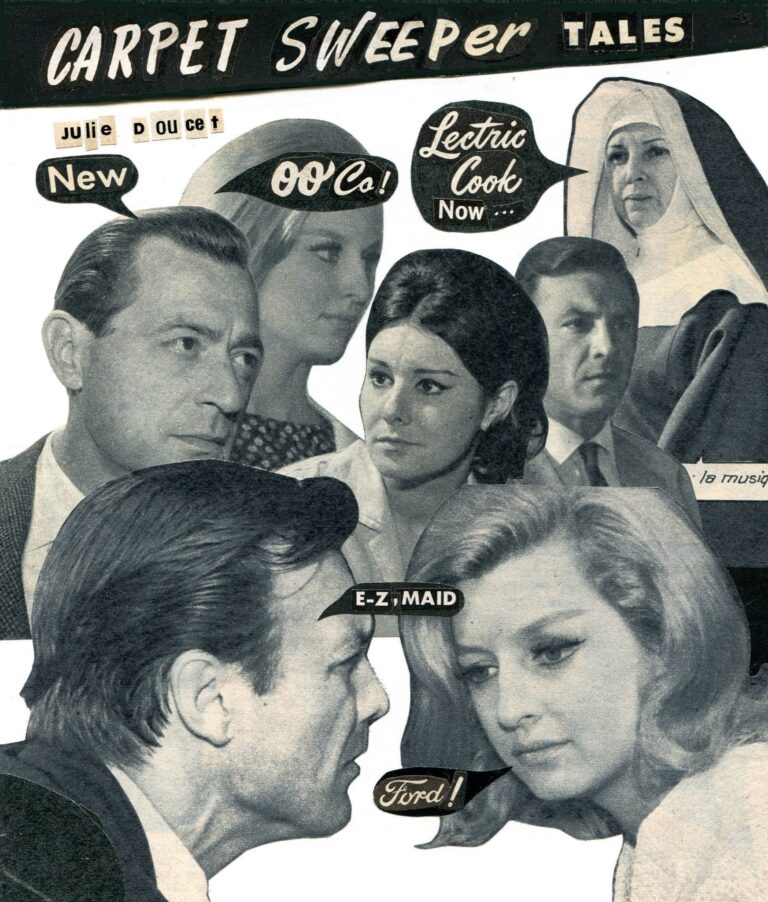