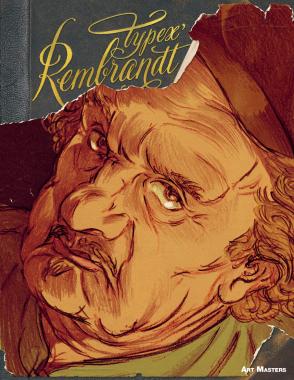 “being an artist, you’re only interested in the public execution”

An elephant is flying over Amsterdam: the heartbeat of the crowded city below her feet skips a beat as people busy taming horses and buying new shoes stop to look up at this international celebrity. No one can take their eyes off of this screaming wonder arriving to the city from far away exotic lands. It is 1642, the rise of Dutch colonial power and the year Rembrandt painted The Night Watch. It is only page 14 in the graphic biography Rembrandt, and we are already gaping with an amazement similar to those puzzled Dutch guys at the inventiveness and the skill by which Dutch artist and illustrator Typex offers us this most unromanticized version of Rembrandt’s life.

All biographies face the dilemma of having to balance between the way celebrities and talents of the past are remembered as outstanding geniuses and the monotony of the everyday and hard work they spent their lives in. Typex chose to overcome this problem by saying goodbye to chronology and focusing each chapter on a supporting character of Rembrandt’s life. In this way, and true to a man who painted more self-portraits of himself than anyone before (or since), we see the painter in the mirror of his wife and lovers, son and daughter. What we see is not necessary a nice picture. Stories of betrayal, debt, the plague, and greed, with some occasional lovemaking to cheer us up. Was Rembrandt really that impossible to live with? Yet the way in which this portrait of the artist is shown is truly unique: the visual style of the book is a true match and homage to the atmosphere and style of Rembrandt’s paintings. Some etchings and oil paintings are directly redrawn and contextualized by Typex, offering an interesting game for the reader and her best friend, the search engine, to look for, find, and identify these references. One of my favorites is the scene when the painter is sketching his wife in an idyllic forest setting (on page 81). Having escaped from their own wedding, the pair chooses the company of vine over boring relatives and without us noticing, the famous portraits of Saskia with crazy headwear are born. And in case you really haven’t noticed, go back to page 71 to check. 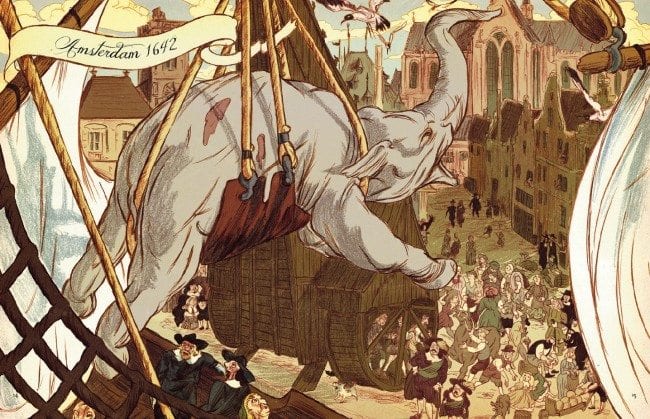 This intimate scene of Rembrandt drawing Saskia’s portrait is curiously devoid of color with the aim of directing our attention to its significant and referential status. It offers a somewhat warmer version of the pale yellows, tans, and browns that dominate the book. Typex’s palette echoes the colors of Rembrandt’s self portraits and oil paintings minus the gloomy dark tones that are so defining especially in the big canvases. The drawing style is dynamic and Typex is especially strong on faces. As the reviewer of The Guardian wrote, in this book everyone looks like a potato – and we love it. The comic pages are dynamic and read well, with Typex offering various instances to play around with the conventions of the genre: he uses color to direct attention both in space and in time, sketchy figures to show drama, and a wide scale of variations on the essential grid structure of the page. Chapter 5, “Geertje”, provides the most reflection on the panels that make up the page with its frequent emphasis on French windows, through which the world can be observed, or which, on the contrary, block one from a sight. These elements highlight the key role of panel-based composition in the narrative, which make the story dynamicly flowing. Thus grids appear in backgrounds against the main action, on the bodies of characters in the forms of shadows, and in the arrangement of panels themselves, championing the power of visual storytelling.

However, what I appreciate most in this graphic novel apart from the network of playful references is that text is kept to the minimal. Rembrandt is surprisingly silent. Pages can go by without anyone uttering a word, or a narrator providing us necessary background info. Actually, this is a biography that has no narrator. It has, however, an active reader: from the very first pages on we find that it is the series of wordless panels and pages, their arrangements and their succession that are entrusted with doing the job of telling the story, and we work hard to figure out to fill the gutters. Thus wife Saskia dies in silence while her husband is working; and lover Geertje is imprisoned in silence while Rembrandt is eating fish (a Dutch pastime, I am told), and while a painting she sat model for is freshly bought and is hung on the wall of a palace. And, naturally, at the end of the book the aging painter (spoiler!) dies in silence after a beautiful eight-page long wordless sequence of gradually darkening rooms and curves. 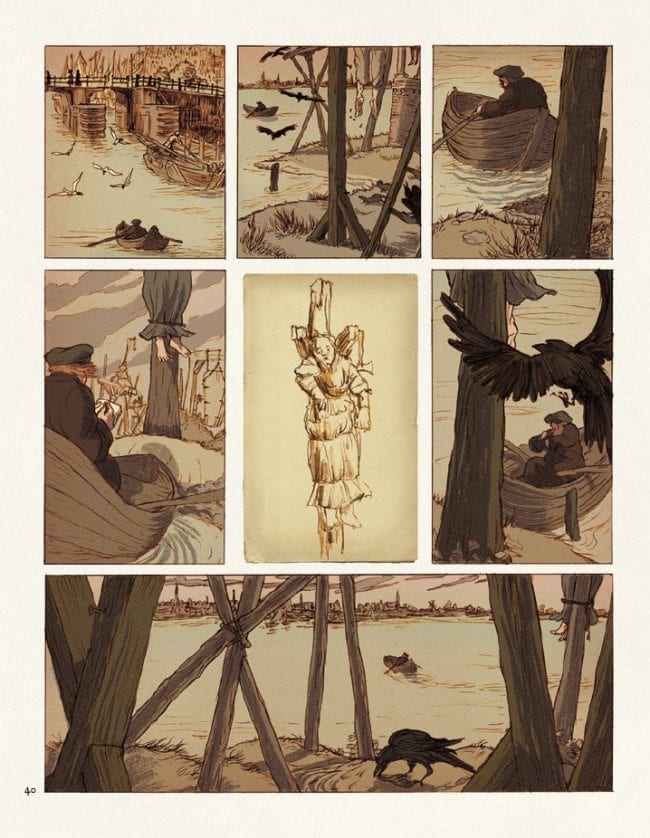 These last pages of the graphic novel refer us back to the opening ones with the Elephant high above the city of Amsterdam. In chapter one Hansje the elephant has clearly stolen the show from the painter genius: page after page we see her struggle in the dark belly of the Dutch East India Company version of Noah’s ark. There is not enough space, and when she is finally lifted up by a crane to be disembarked, the light is too bright. Rembrandt has been a minor character in this opening chapter quickly sketching the oversized creature and turning to look at himself in a mirror for a change.

The following chapters return the spotlight to the painter, but one of the major questions of the book has been asked at the earliest possible point: what does it mean to see and to be seen? Who sees what, and who has the power to see at all? What did it mean then and what does it mean now to see something? While everyone is staring at it, Rembrandt quickly sketches the flying proof of Dutch colonial power: an image of a curious beast to recycle in any painting. Yet in the next chapter he refuses to employ Elsje as his model (though he does not refuse her as a one night stand), while upon her execurion the next day Rembrandt makes all effort to secretly sketch Elsje’s dead body. He could have saved the woman, who was executed partly because of him, yet he chooses not to. In another scene prestigious customers from the Hague cast shadows on a work of Rembrandt they are dissatisfied with. They find the painter’s rendering of the crucified Christ repulsive, but because of their shadows the reader is equally deprived of the possibility to enjoy the work. The right to see is linked to power: the ways in which the empire, the customer, the painter, and the model see and become visible are recurring motifs in Typex’ graphic novel. 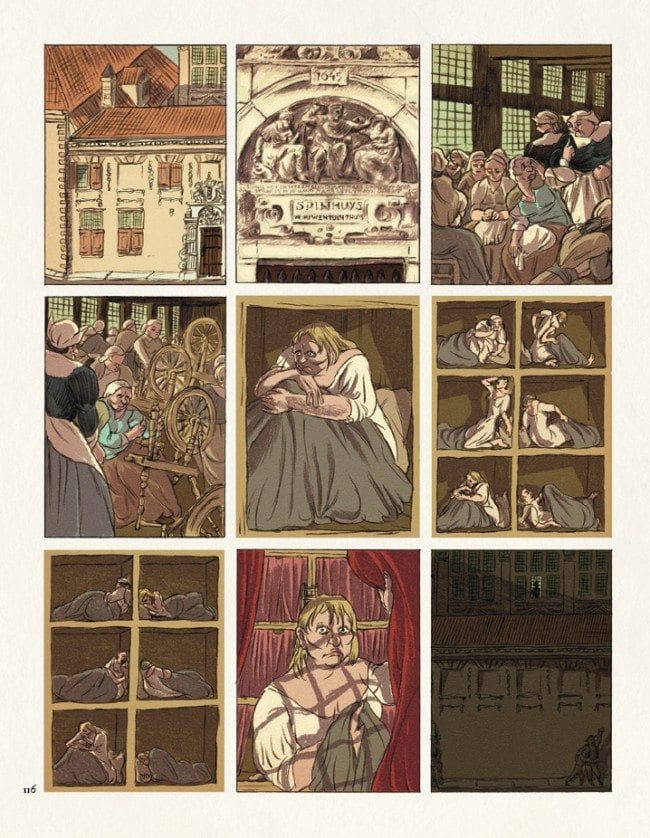 The question is also asked from the point of view of the visibility of men and women, and this perspective is clearly a contemporary one. A significant part of the non-linear narrative is organized around the women who played significant parts in Rembrandt’s life: the executed Elsje, Saskia, his wife and muse, Geertje, the nurse and lover, Hendrickje, a maid to become mother of the painter’s daughter, and finally Cornelia, the aforementioned daughter. These women would be honorable mentions or tongue-in-cheek sidekicks in more traditionally structured (graphic) biographies. In Typex’s work chapters are named after and focalized through them, which means that the reader gets a glimpse into how a companion experienced a given period of Rembrandt’s life. The the female point of view is visualized quite literally and wittily in the scene of the greedy relatives’ visit at the sick Saskia’s bed: the vulture-like family and later Rembrandt are shown the way Saskia sees them, with her own body parts, hands shoulder and bosom in the way.

Visibility as a leading motif of the work naturally makes us see the opening sequence in a new light: who else could the clumsy confined elephant, and then the adored creature of the light stand for than the neglected and adored, driven and indebted Rembrandt, that is, the most controversial painter of his time? 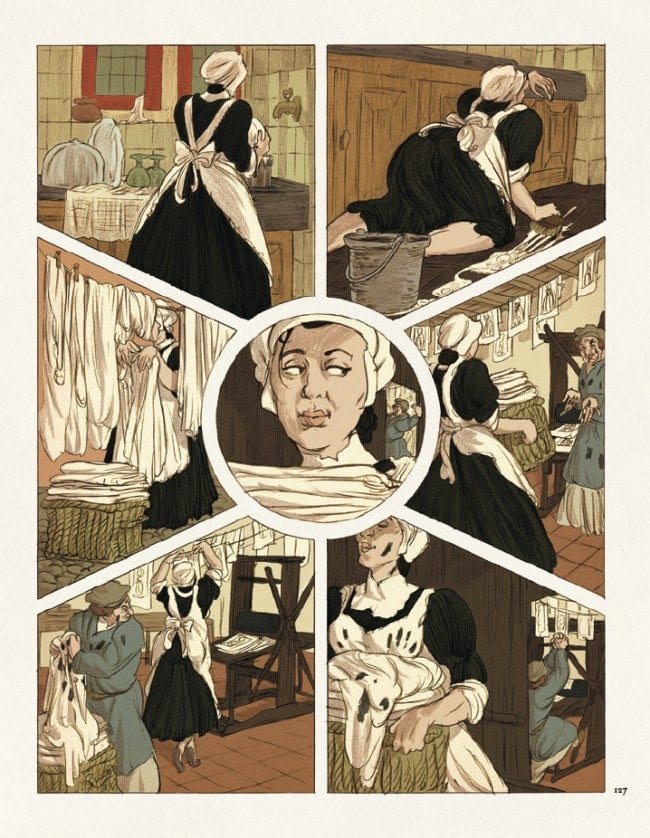 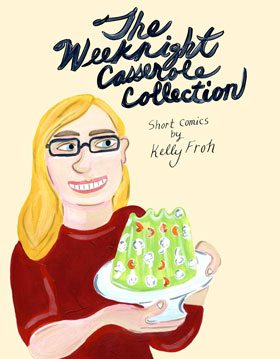 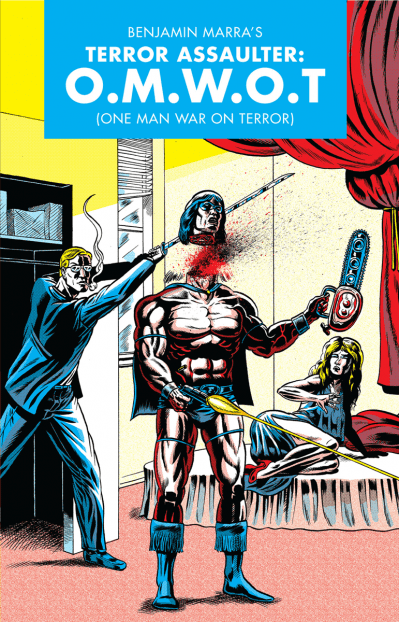