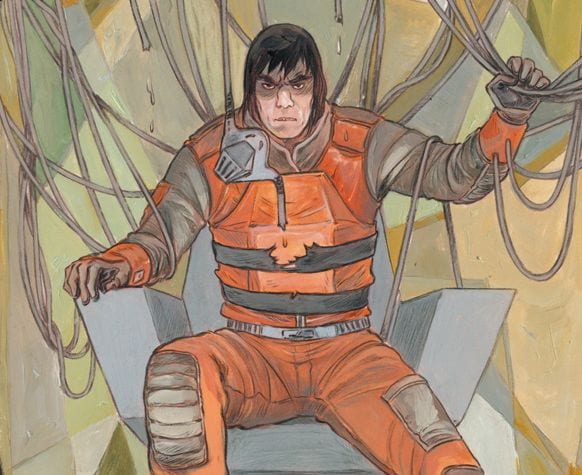 Prophet #21 begins with its hero, John Prophet, tumbling out of suspended animation and retching. What he throws up looks like a metallic egg, which he then plugs into his spacesuit-like getup in order to "stimulate his nervous system and activate his implants." He needs this, because he is promptly attacked by a ravenous creature whose huge, serrated jaws open radially, like a flower (imagine a harmless-looking deer-like ungulate that suddenly blossoms into a horror). Prophet splits its skull. Then, in its stomach, he finds a human hand. He cooks the creature into jerky, which he chews on throughout much of what follows. The world of Prophet is one of primal bodily horrors, and needs.

What follows is a quest. Prophet takes off across the landscape—a post-apocalyptic waste, of course—on an unspecified "mission," and soon comes across a farm where multi-legged critters slaughter apelike humanoids for meat. The questions that this raises are left hanging; Prophet moves on. Following instinct, or a voice "in his head," he comes to the site of his foreordained meeting with an unknown "contact" and guide. That site is the Jell City, a vaguely fungal-looking outpost that serves as the hive for a society of quasi-antlike invaders from another world. Prophet skins one of them and wears its scalp as a protective hood, using its scent to mask his own. He moves through the city as if he were a native, hidden in plain sight. Apparently the other city dwellers are blind.

From there things get weird.

The trope of waking up from a long sleep or paralysis into a strange new world is nothing new: cue Burroughs or Buck Rogers, or, perhaps more to the point, Avatar. The device reliably evokes a sense of estrangement, wonder, and danger. Prophet combines the Buck Rogers displacement premise with a quest fantasy, the upshot of which is the hoped-for resurrection of the Earth Empire (human civilization, I suppose). That's Prophet's mission. But the mission seems to be simply a license for world-making of a particularly grotty, pungent kind. By this I mean the creators' envisionment of a new, almost palpable world, at once enticing and repulsive, made credible by the defamiliarization of even ordinary bodily urges: a physical, skin-crawlingly fundamental sense of estrangement from civilized human habits, extended to such raw and basic sensations as nausea, hunger, and smell; such needs as shelter, food, and sex. Writer Graham, cartoonist Roy, and colorist Ballermann work together to conjure a lurid, gushing world, one that calls for gooseflesh and cold sweat. (A preview of #21 is available here.)

Like James Stokoe's comic-grotesque fantasy Orc Stain, this Prophet operates at a gut level, and plays on symbiosis, parasitism, and body horror. In issue #21, our hero gnaws on humanoid flesh, dons a protective mantle that consists of a living slug-like critter, couples with a monstrosity at once phallic and yonic in shape—here horror and disgust mingle with deadpan comedy—and then gives her (?) one of his internal organs, for the sake of the mission. Things are constantly modifying Prophet's body, or coming out of it, like that initial vomitus.

In #22, Prophet joins a cross-desert caravan of monstrously outsized, elephant-like creatures who have been fitted with huge, human-built shells that transform them into "living factories": an epic but ungainly example of meat/machine symbiosis. Prophet joins the the caravan's insectoid-humanoid crew as a shoveler, meaning his job is to shovel freshly-expelled shit from the ass end of one monster to the gaping mouth of the next, so as to keep these "factories" working. The various factions that make up the caravan community—workers, monks, a hunter—are all hideous and inscrutable:

When Prophet mistakes a murderous ritual for a crime (who could blame him?), he is forced to flee the caravan, at one point hurling a pursuer into the open stomach of one of the great beasts.

In short, Prophet is icky in an inspired way.

Some of its influences are obvious. As in Stokoe, Miyazaki looms very large. Also, in Roy's drawing, I see the fingerprints of the late great Moebius, as well as a yen for alien fauna stoked, it seems, by an interest in paleontology. Roy makes the weird critters in Prophet's world credible, as if he had imagined them from the inside out. His artwork strikes a compromise between a clear-line aesthetic and the organic lushness of Miyazaki, tending more toward the latter as we go on (if John Prophet's features recall the schematic simplicity of Tintin, the entropic gush and grunge of the story-world are something else altogether). Roy's love of SF is clear throughout. Graham's scenario bespeaks the same love, as well as a fascination with embodiment and physical sensation, qualities evident in his own King City (just collected) and Multiple Warheads, not to mention the various sex comics he's done (notably, the story he did for the terrific Thickness #2). Besides writing the story, Graham also contributes to #21 a lovely double-page map of the story's landscape—that staple of high fantasy—dotted, naturally, with incomprehensible hieroglyphs. All these moves are familiar. Yet despite its many obvious points of reference, Prophet casts its own spell, evoking its own fantastical reality.

I gather that this new Prophet, from #21 onward, is a revival of a Rob Liefeld series from the founding days of Image, as well as its sequels from Liefeld's Maximum Press and Awesome—in other words, a '90s comic. If you're keeping tabs, it's part of the current revival of Liefeld's Extreme Studios line at Image. I don't care. I passed on Liefeld's comics in the '90s, and a cursory look back at what I missed tells me that the new Prophet might as well be its own thing. Certainly #21-22 are radically different, style-wise, from what came before, and their Rip Van Winkle premise allows readers a new start. Though this is nominally related to an old comic, it's light years away in execution.

Granted, this new Prophet is still, as Graham says in an interview at We Love Cult, a teenage boy comic. He describes it as "fucking future space Conan ish," and, with its theme of the physically super-capable survivor against a hostile world, that sounds right. The comic is awash in the cliches of men's adventure pulps. John Prophet is a loaner with little personality. He kills expertly in pursuit of fantastical goals. He is brutish, terse, focused. Friends are absent. So are women. Sex is a thrill and a horror. Emotion is faint, dulled. Survival is all; the body becomes a site of testing and abjection as well as a means of triumph (as in that notorious scene of Conan's crucifixion). Hyper-masculine competence rules. This is very familiar territory.

Yet I enjoyed Prophet #21-22, and plan to stick around for future issues. The world-building going on here, through both word and image, is a treat. The cartooning, texturing, and color are splendid. Like King City, Orc Stain, or Nate Simpson's Nonplayer, or for that matter the SF of Carla Speed McNeil or Paul Pope, Prophet relies on florid drawing to conjure a space that is distinctly other: a graphic world. Furthermore, the narrative is bracingly unsentimental, poking at the boundaries of the human. In a comic where the corpse of a living spaceship becomes a city, where "live" ammo is precisely that (!), where the drive for survival can lead the hero to violate a handful of civilized taboos in as many pages—there be possibilities. 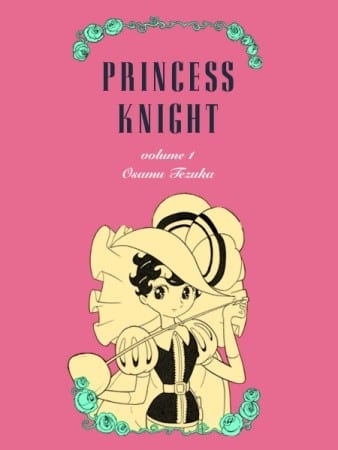 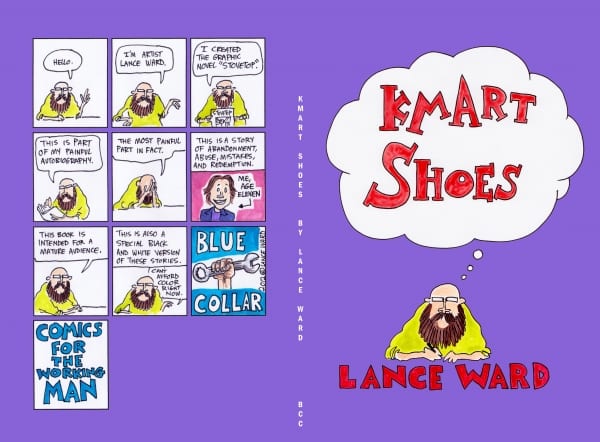