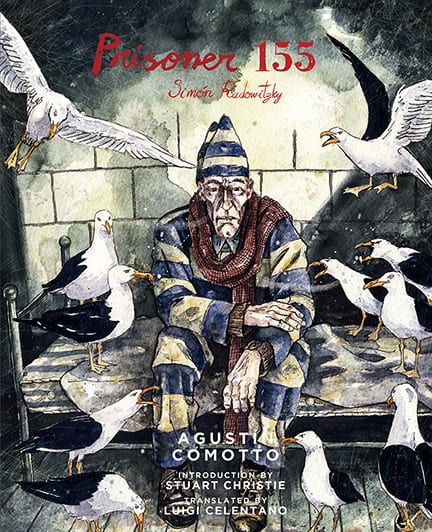 The comics page is a kind of gentle prison. Each panel is an enclosed container for a moment in time and each page a cell block of incidents, words, and ideas. But to further indulge this loose analogy, comics are a minimum-security facility. Ideas have much freedom within these confines—and have the potential to burst through their close quarters.

Given this obvious structural similarity, it seems a surprise that few prison narratives have appeared in comics form. We catch glimpses of the penal system in various genre comics (crime, Western, superhero)—usually as a device to move the story. Prisoner 155 is a political biography, but it’s also a prison narrative in words and pictures.

Writer-artist Agustin Comotto has done his job exhaustively well. Packed with footnotes (most of them essential to understanding what’s going on), the book offers an overwhelm of information in telling the story of Ukraine-born anarchist Simón Radowitzky (1891-1956). Much of the book’s events occur in the early 20th century. There are inescapable parallels to our times. Mankind’s inability to treat itself with kindness, and to accept dissenting views without violence, may never be laid to rest. The struggle remains as real today as it was in the events that shape Comotto’s narrative.

We meet Radowitzky amid his long prison sentence in Argentina—a country he emigrated to, as a teenager, to escape the oppression and brutality of Eastern Europe. Radowitzky has spent most of his adult life behind bars. Much of his time outside prison has been perilous. He witnessed the slaughter of his childhood village in the hands of the Czar’s footmen (an example of the ethnic cleansing and persecution Jewish people suffered in Europe long before Hitler’s rise to power) and took part in a 1905 worker protest in St. Petersburg, Russia—a day known as Bloody Sunday, in which unarmed proletarians were slaughtered in their attempt to present a petition to the Tsar. Radowitzky, by the time of adolescence, was a hardened survivor of a brutal endgame.

A confirmed anarchist by his teens, Radowitzky sought asylum in Argentina, as a step in the process of his family’s relocation to America. At 18, he was part of an attempt to assassinate Ramón Falcón, a Buenos Aires police chief who destroyed the lives of anarchist and Communist protesters in a 1909 demonstration. For this crime, Radowitzky would have been executed, were he of legal age. Instead, he was imprisoned for over twenty years. While imprisoned in Ushuaia Prison in Patagonia, where he was beaten, starved and (in an event not shown in this book) raped by prison guards, he became a cause célebrè to those who sought freedom from political oppression. 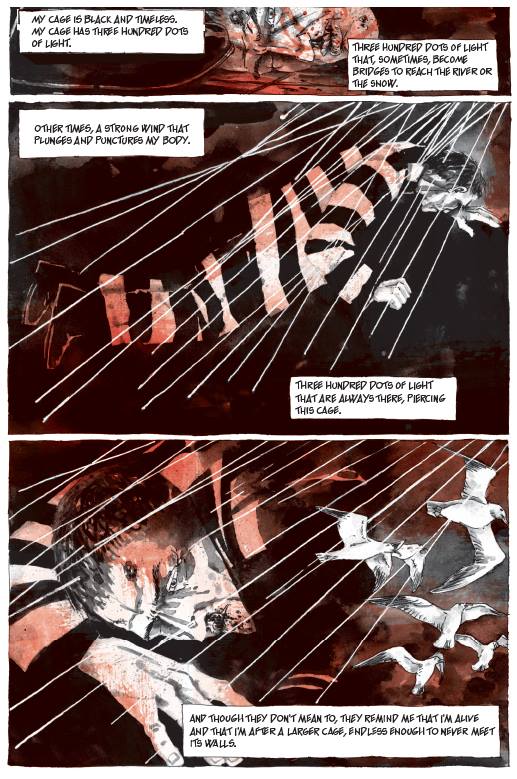 As depicted by Comotto, Radowitzky is a gentle soul forced to take violent action—he has tried to reason with his oppressors and remains stoic under persecution. This fortitude, focused through memories of his one love, Lyudmyla, who he hasn’t seen since fleeing Russia, saves him from death or insanity. He endures the years with quiet defiance, and escapes from prison once, resigned to the thought that he may well be captured and further brutalized for his effort. A hardened veteran of life as a persecuted Jew and a political outsider, Radowitzky faces prison guards and officials without fear. What could be worse than what he’s already experienced?

Prisoner 155 is rendered in gray tone wash, with episodes of red to depict physical violence, emotional shock and moments of narrative change. Comotto is a capable artist whose discomfort in drawing the human form is often palpable. His pages remind the reader of Ben Katchor’s work—without the exaggeration or bristling physical energy. Comotto’s figures sit heavily on the page; they’re functional but restrained.

Comotto’s striking, atmospheric landscapes help bring the book’s harsh world to life. He excels at urban scenes and has a knack for depicting inclement weather. Much of Prisoner 155 feels dank, mildewed, and dripping wet. This conveys Simón’s silent suffering—the existence of a person who seldom knows real warmth, physical or emotional.

Comotto the author, whose words are fluidly translated from their original Spanish by Luigi Celentano, grew up in a politically charged household. He brings an insider’s view to the revolution to the pages of Prisoner 155. Comotto chooses not to preach, or to push an obvious agenda. The motivation and justification for the book’s events are self-evident, and he presents them with authority. The reader is left to draw their own conclusions.

Copious historical asides at the bottom of the pages—often two or three at a time—help Comotto dispense with his characters’ need to provide flow-killing exposition. The tiny print of these footnotes may have you rummaging for a magnifying glass, but they are worth reading, and touch on aspects of political and societal events that shaped the radical movements of the early 20th century—and Simón himself.

Comotto’s illustrated post-script is illuminating; it gives some of his life background and details the whopping tasks this book’s research and creation required of him.

I admired the conversational feeling of Celentano’s translation. The dialogue is sometimes dense—one panel can cover a great deal of ground—but seldom feels over-wrought. Much of the book is narrated by Radowitzky, sometimes with rather purple prose that reinforces his state of emotional arrest.
In one of the book’s most powerful moments, Radowitzky recalls his childhood apprenticeship to a locksmith. During a routine job, Simón silently encounters a pair of upper-class children playing in their posh home. They regard one another with blank caution, as would passing animals of different species. This wordless moment, which occurs in the blink of an eye, is underscored with well-chosen words from Peter Kropotkin’s 1892 anarchist manifesto The Conquest of Bread. In this small moment, the life struggle of Simón Radowitzky—and many like him—is eloquently rendered. It’s a moment that will stick with me for years to come. 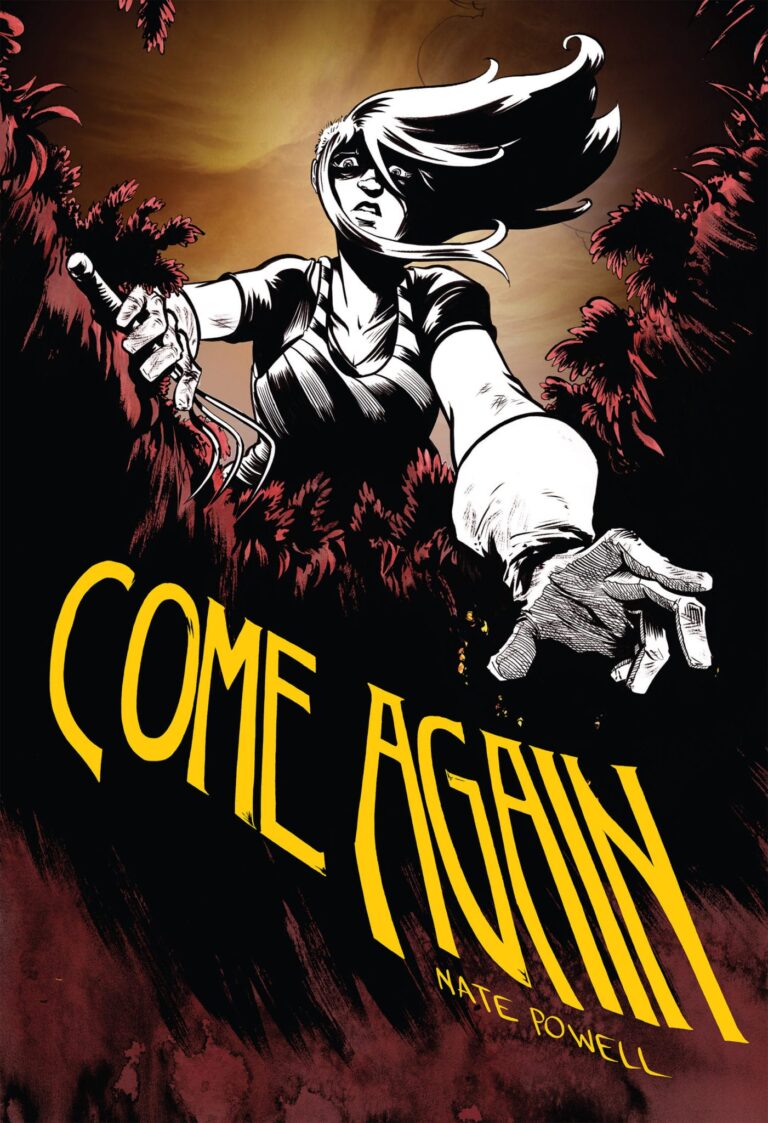 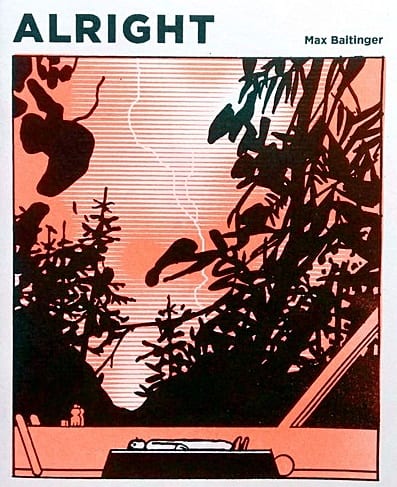