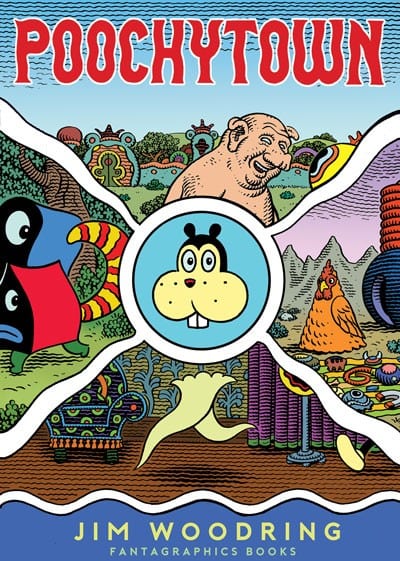 If I had to pick the comics I think will Stand The Test Of Time the best, I'd go with Jim Woodring's Frank books. I don't think Woodring's drawing style is going to kickstart a mass movement, or that his stories project a probable future, or even that he's just ahead of his time, man. No, I mean that when the bombs have fallen and our society’s returned to dust and you're as likely to find a comic book riffling in the wind on a stretch of washed out freeway as you are in the husk of yesteryear's L.C.S., the gestures and concerns of Woodring's weird ass fantasias will seem just as vital and engaging as Chris Ware or Brian-Michael Bendis's mannered evocations of the now will seem archaic and irrelevant. Woodring uses the medium of cartoon drawing to gesture at something ineffable, permanent. His books will last because they transcend their times.

That's not really the half of it, though. They transcend just about everything! I'm tempted to say Woodring traffics in something fundamentally human, but given that his works have so little in common with our own world, that doesn't seem quite right. You can imagine anything with the intelligence necessary to read a book of pictures, whether a computer on steroids or a giant post-nuclear cockroach, getting something out of Frank's adventures. In the latest, Poochytown (which the title page tells us "discontinues" Woodring's last two Frank stories), the ideas of pushing buttons to achieve an effect and sticking out one's tongue to mock something are just about the only tethers tying what we see on the page to today’s reality. If there's a successor to George Herriman walking the earth today, Woodring is clearly the dude. Few others have created cartoon worlds so easy to enter, so logical in their own ways, but so drastically disconnected from anything that goes on outside the panels. 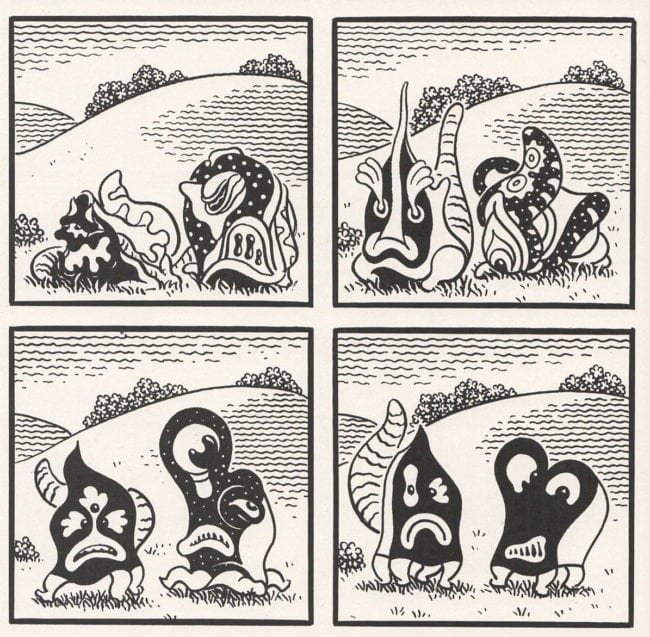 Poochytown's wordless frames are such compulsive reading that one can easily lose sight of the imaginative firepower Woodring puts into every one, as well as into the connective tissue of the comic's world itself. This says nothing of the creative rigor it takes to give momentum to a narrative whose x-axis is psychedelia and whose y-axis is the absurd. There's no mistaking the rigor brought to bear in Woodring's drawings, however. (We are, after all, talking about a dude who built himself a six foot tall steel-nib pen to draw with because the regular kind wasn't sufficiently awe inspiring, or something.) A Woodring drawing is as instantly recognizable as any cartoonist's pictures are, but what makes him such a master stylist takes a little unpacking.

First, there are his forms, riding the classic comic book bullet that whines between the bone-simple and the dizzyingly complex. The black and white shape of Frank splits the difference between Mickey Mouse and Bugs Bunny down to the molecule, hieroglyphic in its simplicity yet existing comfortably within vivid, detailed vistas limned with no shortage of fine draftsmanship. Like Disney or Crumb, Woodring's forms seem to be made of something softer than reality, a malleable boingy substance designed for maximum squash and stretch. But unlike those two fellow travelers, when Woodring's forms begin to flow and bend and pupate (which they do with delightful yet slightly disturbing frequency), they lose none of their solidity. They feel just as real as ever, which is to say not at all, yet totally. 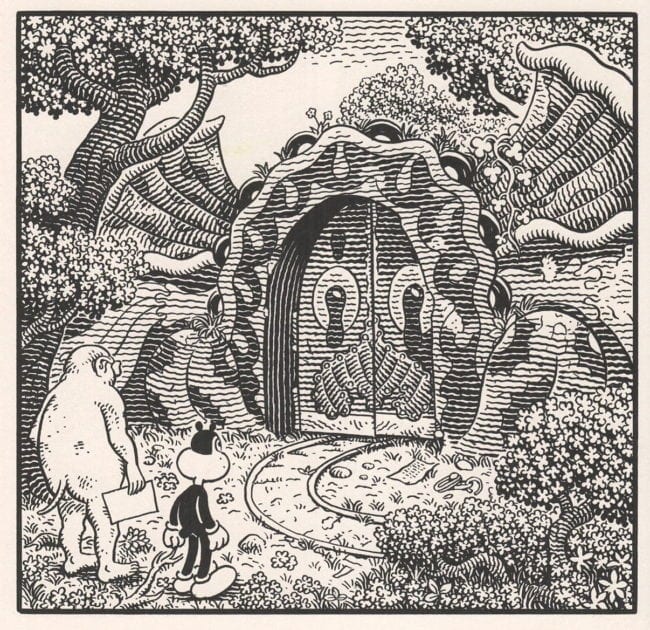 This is due to Woodring's mastery with rendering light and shade and, more importantly, depth and weight, using a signature undulating line of endlessly variable thickness. It's mind-boggling how inkwork so decorative can carry such solid functionality, and if I had to point to one thing that makes Woodring a great cartoonist, that wiggly line would be the one. His ability to create fully realized environments with it is like a carpenter building a house out of spaghetti; it shouldn't work, but you can't argue with the results. Only Moebius has made comic book psychedelia whose concreteness equals that of Woodring's, but even Giraud always kept one foot grounded in some kind of naturalistic reality. Woodring hurls himself into the void with a song. The common denominator of all the elements contained in his art says something about the effect of his work as a whole: the straight is to be studiously avoided, the wavy enthusiastically embraced. 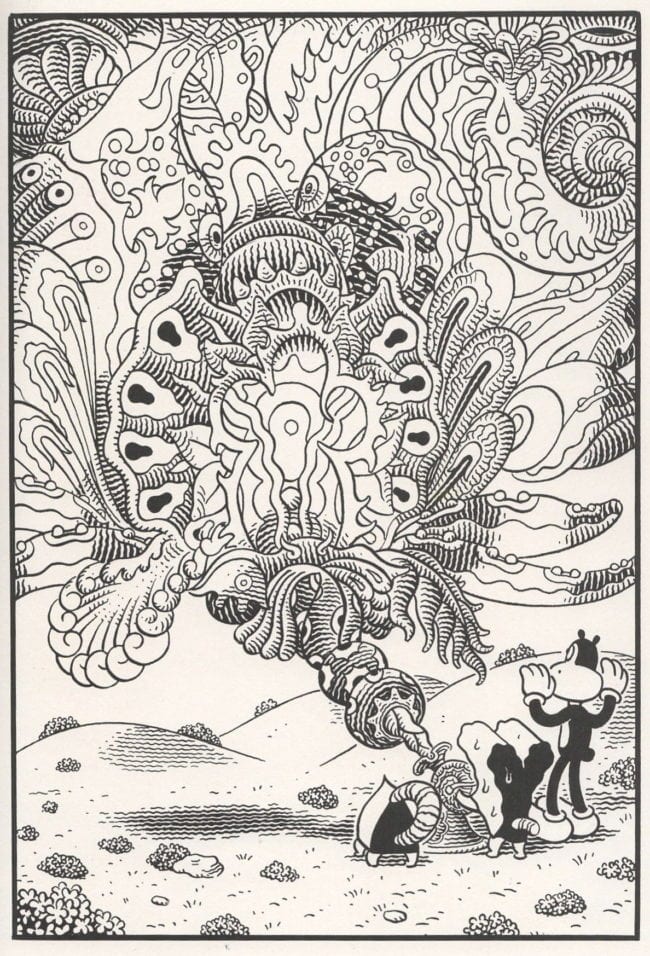 Still, Woodring's ability to tell a story is an equal partner in what makes him special. It’s as underrated as his drawings are iconic. Keeping readers moving briskly through pictures that all but beg the eye to stop and bask in them awhile is a tall order, but it’s pulled off here with gusto. I've always felt that Woodring was an under-discussed influence on the Fort Thunder wave of cartooning, with his emphasis on environmental exploration and the refreshing baseness his characters exhibit in the midst of their world's grandeur. Poochytown is a return to those first principles after the rewarding romantic interlude of Frank's previous outing in Fran. After Frank's erstwhile companions Pupshaw and Pushpaw depart for a utopia of their own making early in the book, Frank avoids total abandonment by falling in with the brutish Manhog for a typically atypical romp through surroundings that alternately thrill and threaten.

It's more episodic than what Woodring's graphic novel-format books have mostly traded in, but what its narrative lacks in thrust it makes up in facets. The lysergic wonderland that Pupshaw and Pushpaw enter to open the book is almost seizure-inducing in its visual smack, and the effect it has on the little guys' bread loaf-like anatomy by the end is both hilarious and a bit uncomfortable if you've ever seen a friend intoxicated beyond their ability to control their body. There is an indelible moment of more pronounced horror midway through the book as well, one that is better read than described, but I will say that it takes full advantage of Woodring's image-making ability while managing to disturb with what it doesn't show. The pathos of Frank's wanderings without his best friends by his side is showcased in a scene of unexpected emotion, one that carries a refreshingly un-showy reference to Shakespeare, and the book concludes with an aerial-assault sequence that has more than a whiff of Wile E. Coyote to it.

Through it all, perhaps the most impressive thing is how the story never stops unfolding, how Woodring keeps us moving through his world alongside his characters, chasing after something that we can't identify because it doesn't exist in reality. For a book with the decadence, the visual languor that Poochytown boasts, the momentum that Woodring musters by casually unrolling wonders and oddities is perhaps the oddest thing on display. Like all the best comics, it's easier to read than it is not to. So if your great-grandkid happens to see a copy tumbleweeding down the melted macadam of whatever environmental explorations our own far future holds, they should really pick it up. It's sure to please them no matter how their world’s wandered from our own. 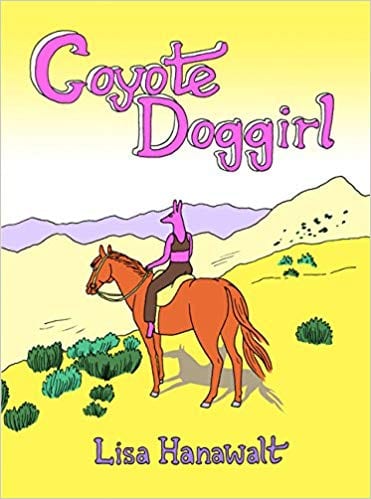 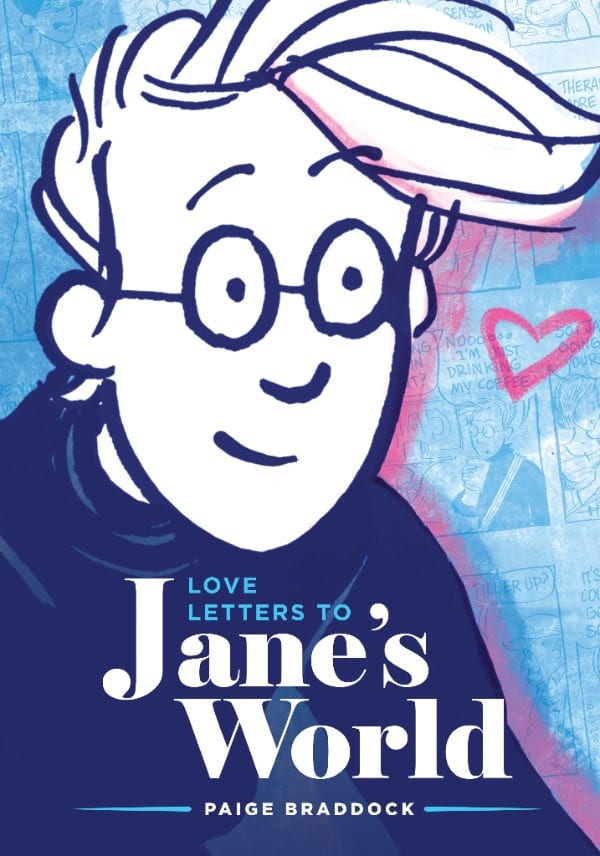