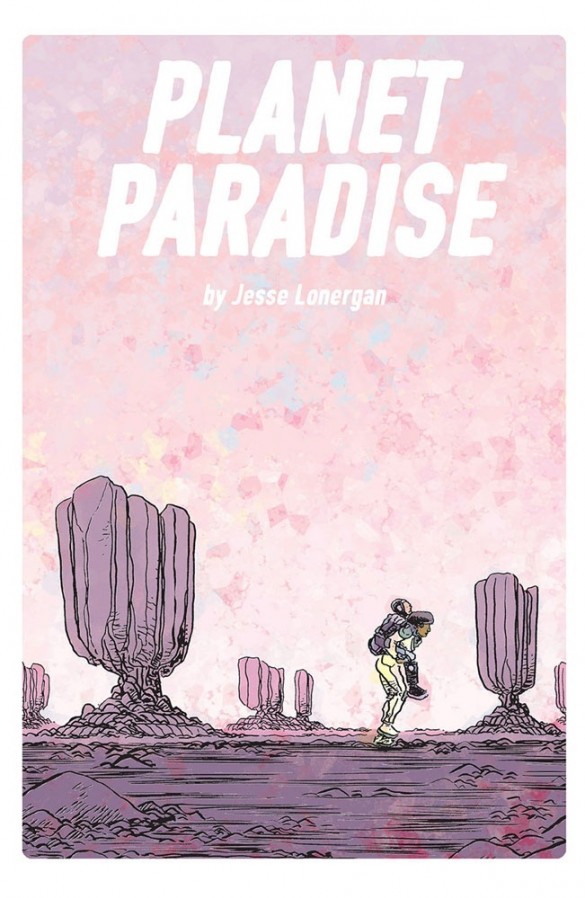 This one starts with a billboard hung above a dense set of skyscrapers and rush hour commute, advertising the conceptual namesake of the book,  and then it goes on and on, depicting a hostile world of giant red lizards, and a planet that’s literally a tropical vacation — The Paradise Planet.

It shows a woman named Eunice, who hops a shuttle flight with her partner to The Paradise Planet, but crash lands somewhere ugly. She has to fight the giant lizards to save herself, her partner and the shuttle captain (who isn’t a leader you would celebrate, considering his lack of action, but is maybe the “hero” of our time), and she seems to find herself in this conflict.

Besides a few moments of exact violence, the tone is breezy, almost playful, and the protagonist is shown to be cool, collected and capable, maybe even enjoying her adventure, like any hero in the traditional sense (juxtaposed with our shuttle captain). The comic is plot driven, to a degree, but the work’s primary focus seems to be Jesse Lonergan’s attention to execution.

The comic is very fluid and succinct in its presentation. It’s easy to admire for its emphasis on visual storytelling, as well as the choices its author makes in his panel compositions and moment selection, and for how prominent and consciously a role page design plays. But where’s the heart? I walked away with a glimpse of it, but not enough to let this book live with me in any meaningful way.

Lonergan seems to be of the Brandon Graham-school of genre, wherein science fiction is more a landscape or springboard for character development than it is a determiner of plot or big nerd pleasure or is the sole focus. Maybe Lonergan wouldn’t appreciate such a comparison in today’s ecosystem, considering that Graham’s personal life and behavior have drawn criticism, but I can’t help see a connection.

For example, there are several instances in which the characters of Planet Paradise are shown eating or watching television, inviting the reader to think about basic needs in a universe of technological magic and alien organisms. Graham has implemented this trick to flex science fiction’s ability to simply act as a setting for everyday human activity, while presenting opportunities for different types of “action” in sci-fi stories. 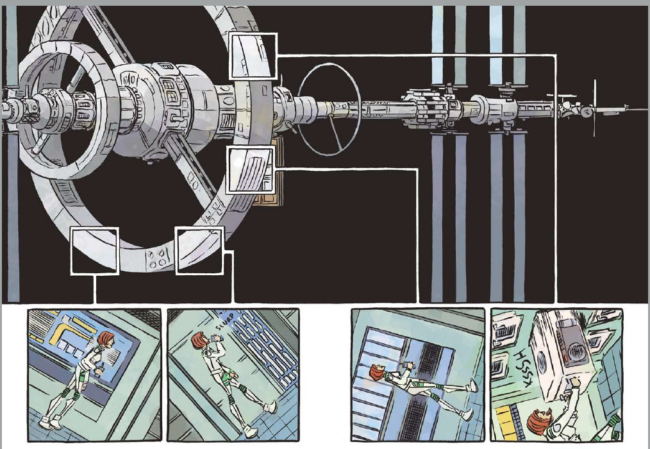 And like those comics, Lonergan’s Planet Paradise seems determined to be a genre work that establishes its own integrity or authorial voice through a commitment to craft. It's not a bad decision by any means, especially when so many other genre comics strive for soap opera and little else, but the choice nurtures its own limitations. Lonergan's attention to a unique execution appears fruitful and uninhibited while it's really cut off at the knees, somewhat, stymied by insecurities or a need to look a certain way, leaving the story wanting.

Lonergan’s book isn’t as cornered, though, as some others that explore this approach. It does mingle with its humanity without demanding that this humanity appear cool or intellectual, and it lets our hero greet a genuine sense of wonder, inviting the reader to do so, too. It’s just subdued.

Did you read Hedra? I didn’t, but I’ve seen a few pages, and I’ve read Tegan O’Neil’s review. Hedra and Planet Paradise explore a similar thing. They both explore what it actually is a cartoonist literally does when they tell a story.

Lonergan has chosen to emphasize this very practice by depicting sequences that are grounded by characters accomplishing tasks, or committing action, or traversing from point A to B, and he presents these occurrences literally by supplying a visual breakdown of how such happenings happen (which is another similarity to Graham’s comics). In this, a reader is forced to slow down and absorb the physicality at hand, both within the story and within the creative process. Seeing this, a reader knows an actual hand considered and marked each thing they’re reading, and that a cartoonist determined each and every muscle twitch or footstep.

This supports Planet Paradise’s broader, thematic interests, or goes to show the tension between settling into the expectations of a job and wanting to embrace the big ideas of kids. Lonergan speaks to mundanity overshadowing the wonder with this comic, while trying to make a bit of room for the wonder to shake a fist. 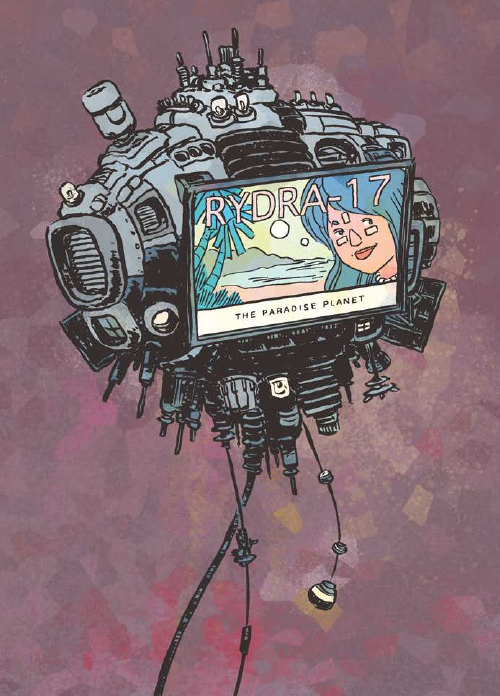 For example, go back to the billboard, from the beginning. Its product is Paradise. It’s visitable only aboard a spaceship in a science fiction future. It has hot people; it has palm trees; it has color saturation and warm lighting. There’s a whole planet out there reserved for vacation and your dreams, an escape from the smog and claustrophobia of home, built onto a literal other world, but it’s no better than a Carnival cruise experience, and sold the same way. Lonergan almost makes you laugh with that.

He writes the inevitable rescue mission of the crashed vacation shuttle similarly. When a distress signal reaches the equivalent of 911 in space, the first responders react to the transmission with ambivalence, one of them continuing to suck soda through a straw, almost annoyed he has to go, and definitely annoyed he has to go alone because of budget cuts. He passes the five-day journey by watching a soap opera, audibly more invested in this than any adventure or wild, wild thing he may encounter once arrived, and Lonergan draws the whole thing encased by moving rocket ships and the vast expanse of the unknowable universe. Look at the billboard, again.

The billboard is just a rectangle, like any of them. If you were walking along below, or flying by, you’d probably fail to even register it, though Lonergan draws his hero, Eunice, as an antidote to such perspective. She’s a hero being heroic in a world of jobs, learning what that is, taking chances, trying things, while others are so caught up in the structures they inhabit. The shuttle captain never stands, for instance. The character is always shown seated or horizontal, as if prepared to assume the driver seat of a spacecraft and perform their usual task. 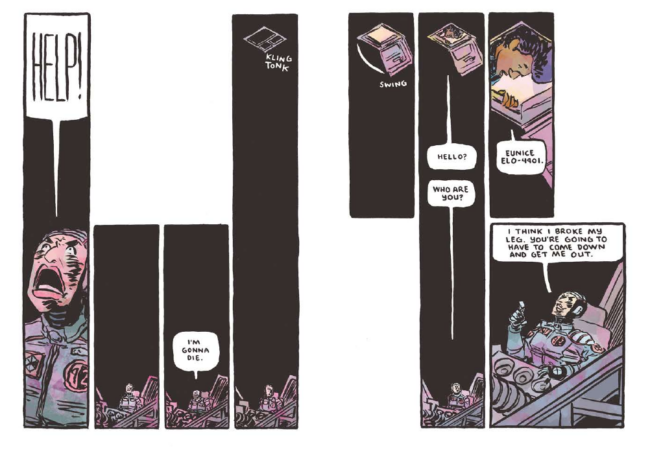 Not Eunice. She bounds and slays and lifts heavy things. By the end of Planet Paradise, she indulges her knack for these activities, at odds with her partner’s desires. But the comic just stops at this point. It ends with Eunice killing a monster, walking off to whatever else, her partner stunned, being beckoned to follow her wherever.

Another reviewer called this “a breath of much-needed fresh air in a literary landscape teeming with authorial unpacking,” but I don’t know. I think it just stops. I think comics sometimes try too hard to be artful. Maybe that’s the case here.

Maybe Lonergan is dressing nothing with something. Because for someone who takes the time to clearly guide a reader’s eye by ensuring each and every panel of Planet Paradise is a solid beat to follow, it seems odd to leave the reader with a splash page and an ambiguous send-off. Or maybe I just didn’t get it? There’s all likelihood the finale is a demonstration of who Eunice is in a single image: a lady who kills monsters, a hero who can handle surprises. And when the world is so busy talking and talking, telling you who and what are worthwhile, leading by anecdote or advice or sermons, Eunice standing there triumphant could be a nice change of pace. A real moment where we see someone do something versus exclaim. A tie-in, of sorts, to Planet Paradise’s entire show-not-tell attitude. But for now, I’d like to think of this as Lonergan’s warm-up.

There’s something here. There’s intelligence and ideas. There are the subtle marks of character development and world building. But its Lonergan’s commitment to visual storytelling that actually undermines this comic, somewhat, because of how he decides to break from this execution and identity in the 11th hour. For a comic book so considered, and one that sets out to provide a specific, rhythmic experience, it reads as haphazard and out-of-gas when a splash page draws it all to a close, rapidly. I can see what Lonergan wants in this decision. He wants to shove past tight structure and meticulous visual story beats and opt for wonder and big feelings and hurrah, and I admire that, but it’s an abrupt transition that sacrifices what has already been put to paper, and it’s an excuse not to develop another 20 or 30 pages that could actually explore that burst of color. 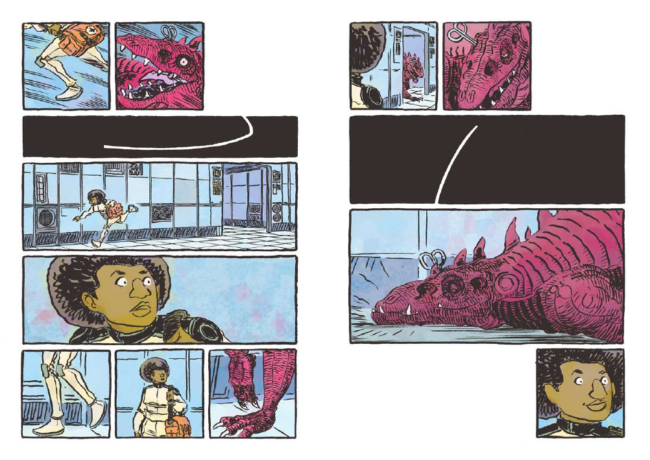 We’re so caught by the craft and the movement presented in this comic, we aren’t left with as much time for the heart. And when it is time, we’re only shown a fraction. But the heart’s there. It’s just buried. Down beneath an exercise in form, and we need Lonergan to shovel that out, some, so we can step back and point to the book and say, THIS. Not leave us with an open-ended conclusion dropped in as if that’s enough. As if we’ll just take that and create our own experience. I mean, we can, but it’s much more satisfying when a storyteller really leads you somewhere and gives you something, versus places the effort on the reader. Otherwise, it’s like another billboard — albeit a somewhat different shape, you know? It’s a comic book, like so many of them, promising much, yet delivering what it actually can. In no way is Planet Paradise a bad effort or a waste of time, but ultimately it keeps chanting, hey, next time, next time, next time! 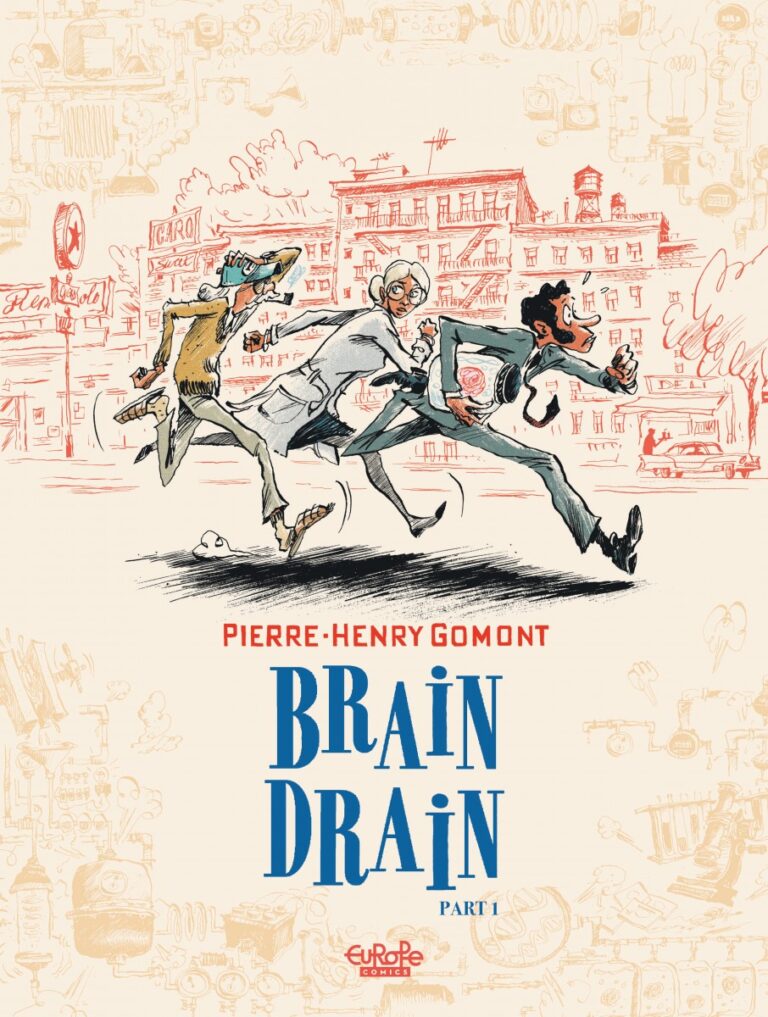