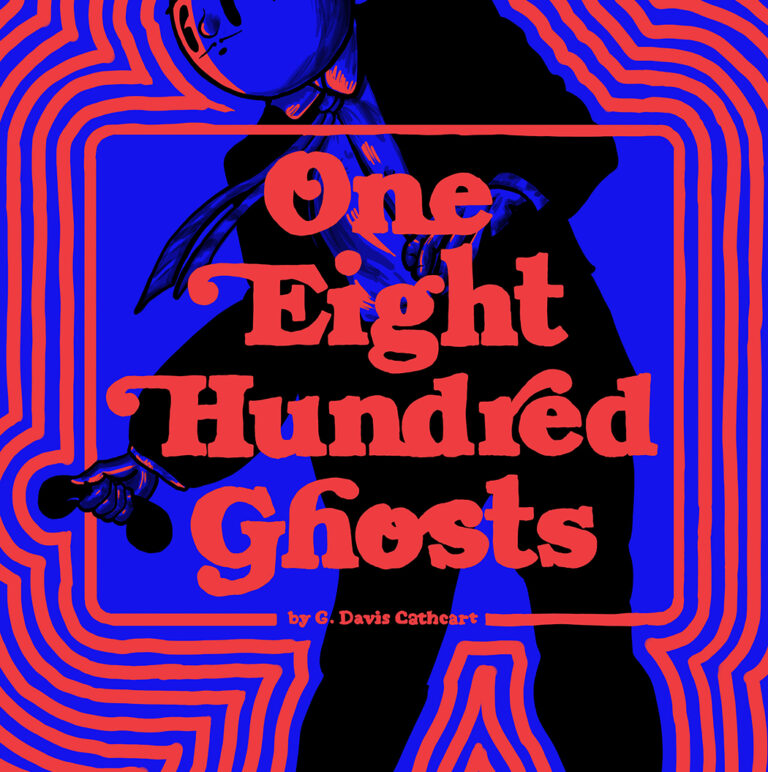 You almost never see a comic like this. G. Davis Cathcart has just a few publications to his name, but he's already got a fully formed, unique aesthetic and a finely balanced sense of how to use it. Most cartoonists never get to either of those places. Cathcart's One Eight Hundred Ghosts is more or less a perfect comic, which isn't to say nothing could top it, but that everything in it from story and art to book design and printing are all pulling together in the same direction at maximum strength. It's the kind of work you can either just sink into and let wash over you as a reader, or spend a few hours with as an armchair critic, picking out the little flourishes that make it sing. It's a pleasure to behold.

The first thing anyone will notice is Cathcart's drawing. Bouncily cartooned figures with a real sense of weight and gravity act as scaffolding for the two big stylistic flourishes that make this feel like kind of a Weird Comic. Every character has forearms like EC Segar gifted Popeye, massive ham hocks that hang between wrist and elbow; while atop their otherwise realistic bodies sit enlarged, spherical heads with features that cross between the classic Smiley Face and Bob's Big Boy. It's not unusual to see figures stylized into bodies this outre sink a comic when it comes time to execute the little gestures and interactions that move a story along, but Cathcart twists his characters' dinner-plate eyeballs and barely-there mouths into dead on facial expressions, and displays a thorough understanding of body language's subtleties. Rarely has the way people's hands get all calisthenic and twitchy on cocaine, or the buzzing claustrophobia of a restaurant both fancy and crowded, been captured this well on paper. 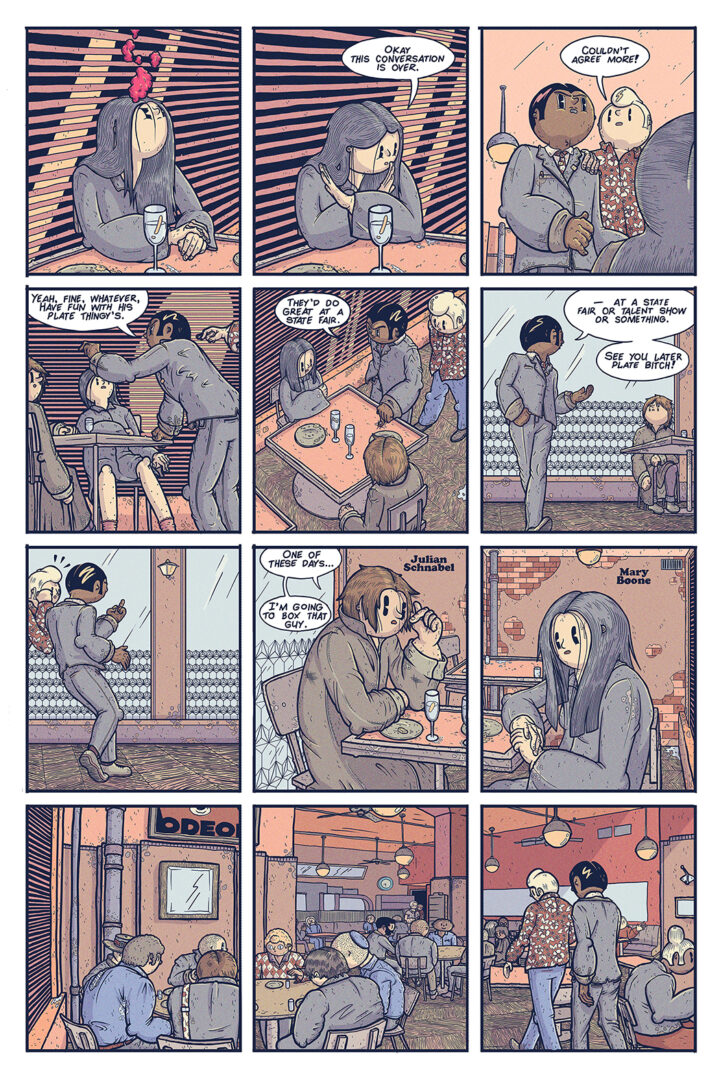 As impressive as the needle Cathcart threads with his drawings of people is, there's no letdown in his visual treatment of anything else. One Eight Hundred Ghosts' period setting of downtown NYC in the Basquiat-and-Blondie early '80s is absolutely nailed, from layers of grime bedecking the backgrounds to meticulous new-wave patterning on wallpaper and floor tiles to outfits designed with a sartorialist's flair, a caustic blue-brown-orange palette staining everything. The cartoonist Cathcart feels closest in spirit to is the late, lamented Seth Fisher, with whom he shares a few tics of cartooning shorthand. Fisher, like Cathcart, also always seemed not just intent on but absolutely thrilled about squeezing as many of his very specific set of poppy, left-field visual impulses as possible onto every page, while somehow managing to give them all room to breathe. But where Fisher used wriggly, unconventional page layouts as his shoehorn, Cathcart is more of a classicist, pinning his comic to the steady rhythm of a 12-panel grid. In both long dialogue sequences and quick-hitting action scenes, this choice - which feels very much like the decision of a writer-artist rather than the artistic collaborator Fisher always was - pays off, keeping the focus on the narrative's momentum rather than guitar-solo drawing exhibitions. Which are there too, don't get me wrong! Cathcart just makes sure they don't derail things, impressive in itself. 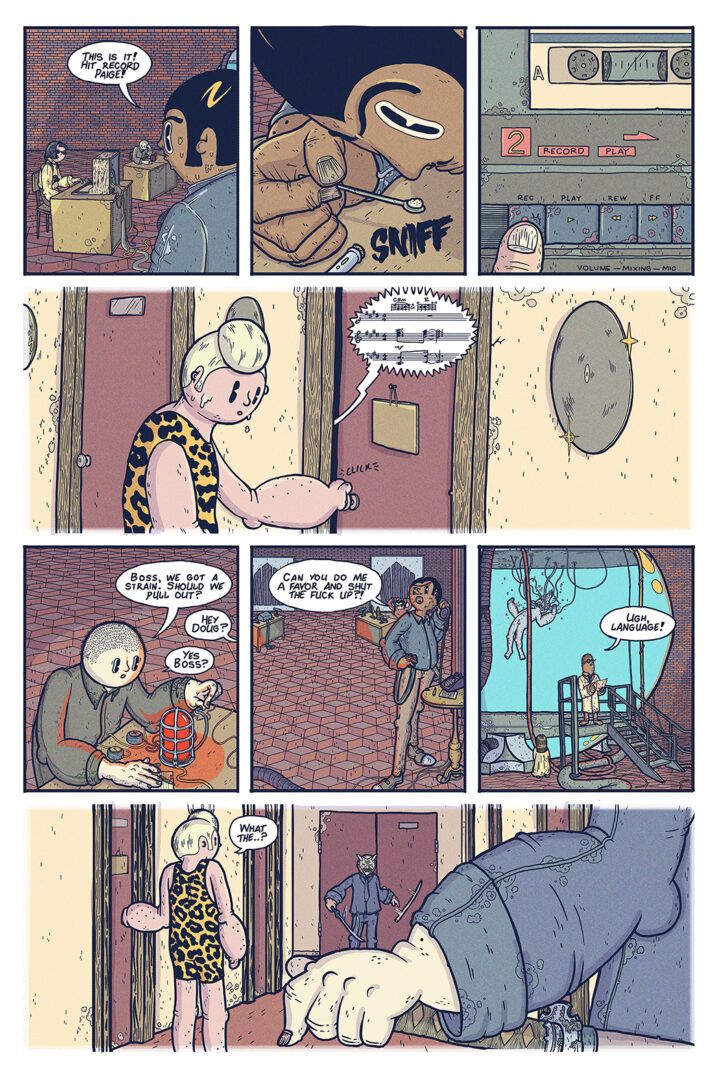 Part of why the book works so well in total is a plot that matches the hyperactive derangement of the drawing - it's as high-concept as comics get, with a storyline that reads like something Mark Millar might dream up if he stopped exhaling press releases and started inhaling bong rips. I had so much fun shaking my head at the absurdity of the idea behind Cathcart's comic that I'll mark a first in more than a decade of writing about comics and insert a spoiler warning here. It's an art heist comic in a year that's already seen the English translation of an excellent one, which is making me all kinds of hopeful for the flowering of a mini genre... but (of course!) there's a twist! One Eight Hundred Ghosts' gang of profusely sweating reprobates aren't stealing a canvas, but attempting to plagiarize Michael Jackson's Thriller note by note, four years before the album comes out. The time-traveling method for this madness has some shades of Matrix or Inception to it, threatening to tip a comic about desperate, decidedly small-time crooks into the dodgy territory of a sci-fi epic - but Cathcart neatly pulls it out of the fire with hilariously profane, petty dialogue and the all-too-rare sense that his characters have actually known each other since long before the first page of his comic. A blood-gouting, layout-warping double-cross climax that echoes Frank Quitely or Geof Darrow's more mind-bending moments without suffering at all by comparison to either of those all-time greats is backed up by a rimshot epilogue as crisp as anything that Quincy Jones miked up for Thriller.
One Eight Hundred Ghosts is a blast, the rare silly, daffy comic that's imagined with enough depth and unfolds at great enough length to stand beside serious, emotional work of equal quality. It's the rare comic that one can't imagine a hypothetical better version of, as perfect as an object as it is as artwork. It's difficult indeed to imagine that self-publishing was the only option for a product this appealing and assured; but Cathcart, like only a small handful of other cartoonists, has gone to lengths that ensure it was the best option. Rather than appearing as yet another hardcover graphic novel struggling with both the expectations and the solemn tone enforced by prestige presentation (a fate none too difficult to imagine), One Eight Hundred Ghosts is as deluxe a minicomic as can be, with a cardstock cover and black-lacquered staples opening onto tiny pages full of even tinier panels holding one of the most polished, subtle risograph printing jobs I've seen. Cathcart's meticulously detailed drawings drown in hazes of color-dotted fuzz, printed so small it's tough to pick out single lines or colors. It feels like some idealized version of a "shitty little comic book", which is exactly what a story like this one should exist as. 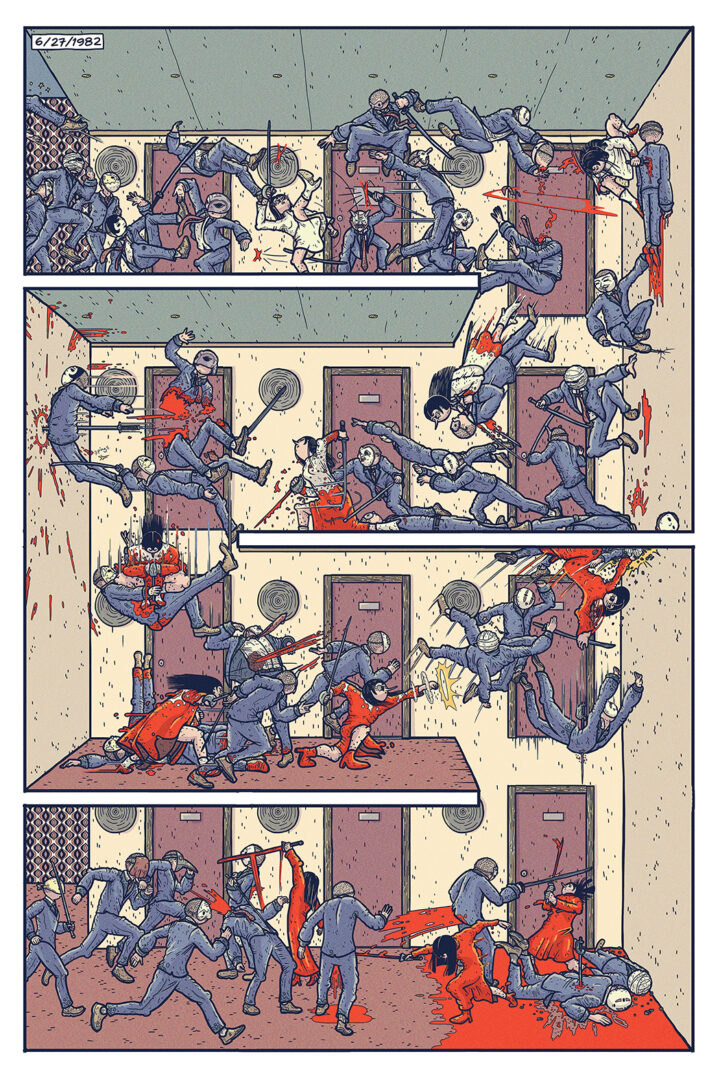 There's a subset of readers who'll find a comic literally too detailed for the naked eye to perceive, complete with letters a millimeter tall reeling off a story full of sarcasm and reference, to simply be a pain in the ass - but for me this funny, action-packed, beautifully drawn work does more than enough to accommodate its audience. Squinting into Cathcart's panels with the book a few inches from my nose gave me a feeling I associate with the bygone late-2000s of Rafael Grampa's Mesmo Delivery and James Stokoe's Orc Stain, when action comics that forcibly impressed their importance on you with the obsessive care of their crafting felt as vital as anything else out there. No matter how much comics changes, the loud and rude and violent is in the medium's DNA, just can't stop being things the form excels at. If having an artist with some funky chops remind you of that sounds fun, pick up One Eight Hundred Ghosts and hold it so close to your face that you can smell the pages. 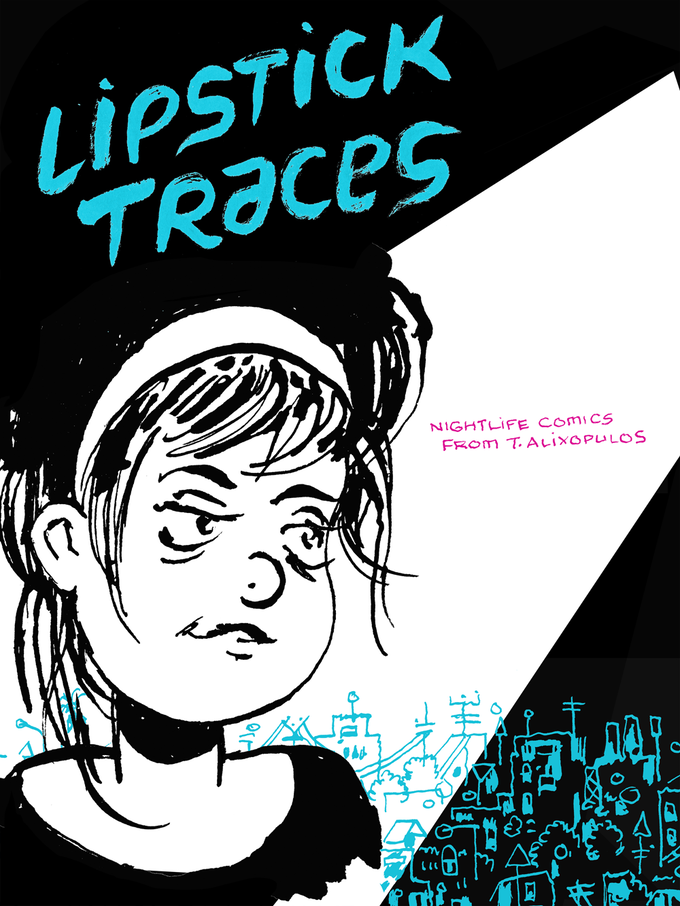 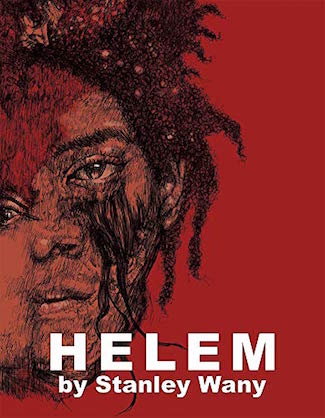