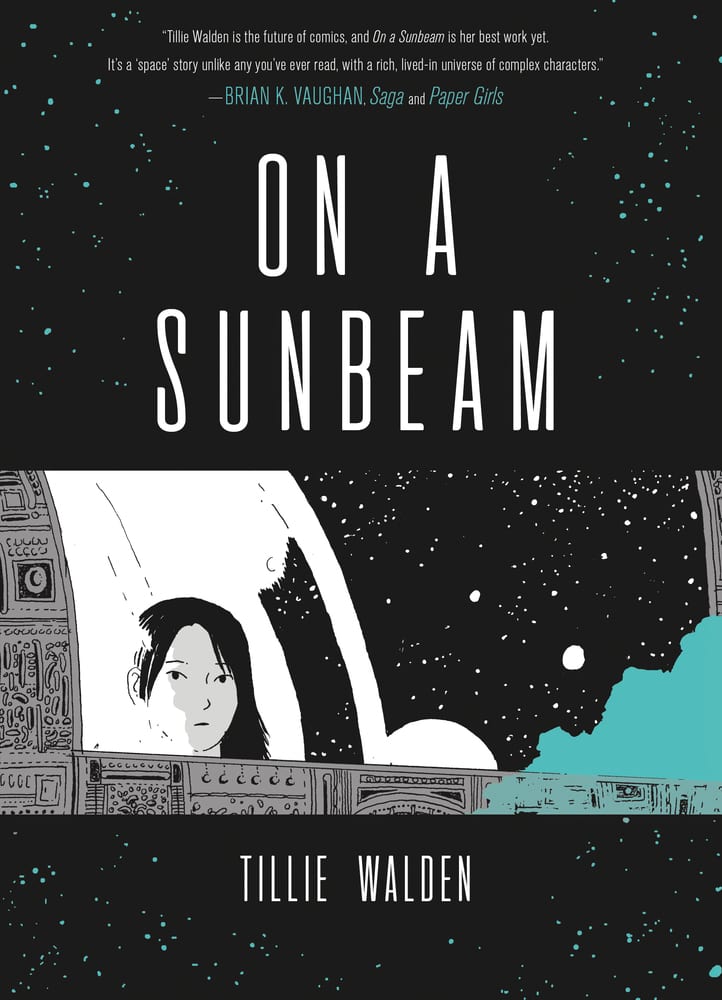 Ursula K. Le Guin, the legendary science fiction author, published The Left Hand of Darkness in 1969. One of her most famous works, Left Hand presents a world where the human-like denizens are hermaphroditic, performing different sexual roles at different times in their lives. It’s a masterful conceit that lays the speculative groundwork for the entire novel.

Nearly fifty years later, cartoonist Tillie Walden’s new sci-fi graphic novel On a Sunbeam, has a radical conceit of its own: there are no men. And not in a Y: The Last Man kind of way. There are no men depicted or mentioned. (One character is non-binary.) Even more radically, this fact is completely incidental to the plot. It’s a credit to the storytelling that the question of what the book is trying to say by not including men is amongst the least interesting questions it poses.

Walden is 22 years old and already one of the best-known graduates of The Center of Cartoon Studies, where I also studied nearly a decade ago. While neither of us can hold a candle to Sasha Velour, class of 2013 and winner of RuPaul’s Drag Race Season Nine, Walden is one of the most prominent working cartoonists to come out of CCS. 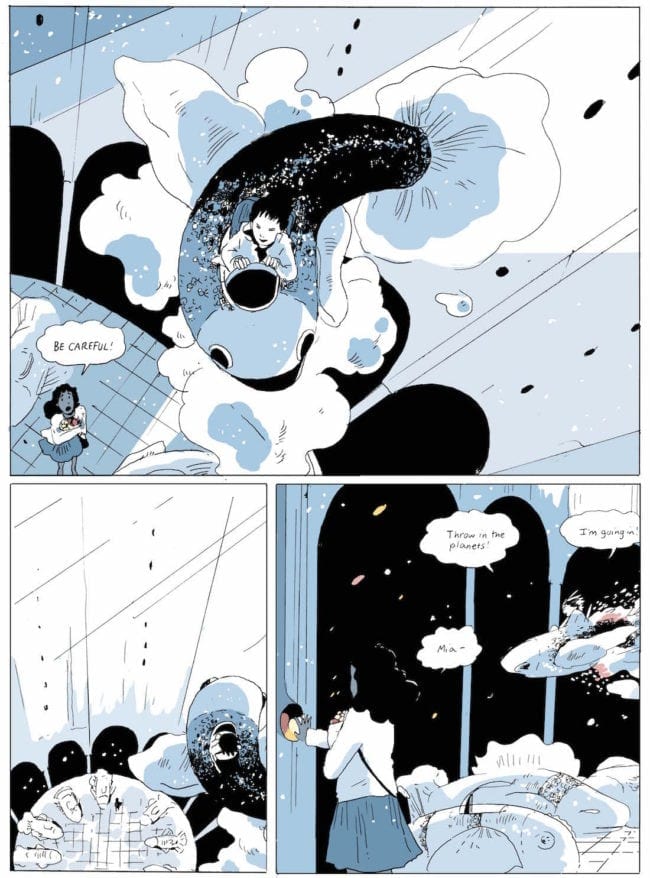 Walden published On a Sunbeam as a webcomic from fall 2016 through spring 2017. Somewhat unusually for webcomics, Walden typically released a new 30-page chapter each week. This was in addition to daily diary comics and other work. Indeed, Walden is known for her ferocious work ethic and speed. OAS was nominated for the “Best Digital Comic” Eisner Award in 2017 and is being released as a paperback graphic novel this October by First Second. It will be Walden’s sixth published book.

Space, in OAS, is not a cold, lonely void. It’s where Mia and her newfound friends fly around and repair dilapidated buildings in a fish spaceship. There are trees, you can breathe, and there’s a lot of casual levitating.

Just go with it — it’s all-female space Hogwarts with swears. Fans of Nausicaä of the Valley of the Wind, Doctor Who, and Firefly will find familiar themes and tropes. But in OAS, the stakes aren’t intergalactic, they’re interpersonal. Will Mia get along with the crew? What happened five years ago at boarding school? 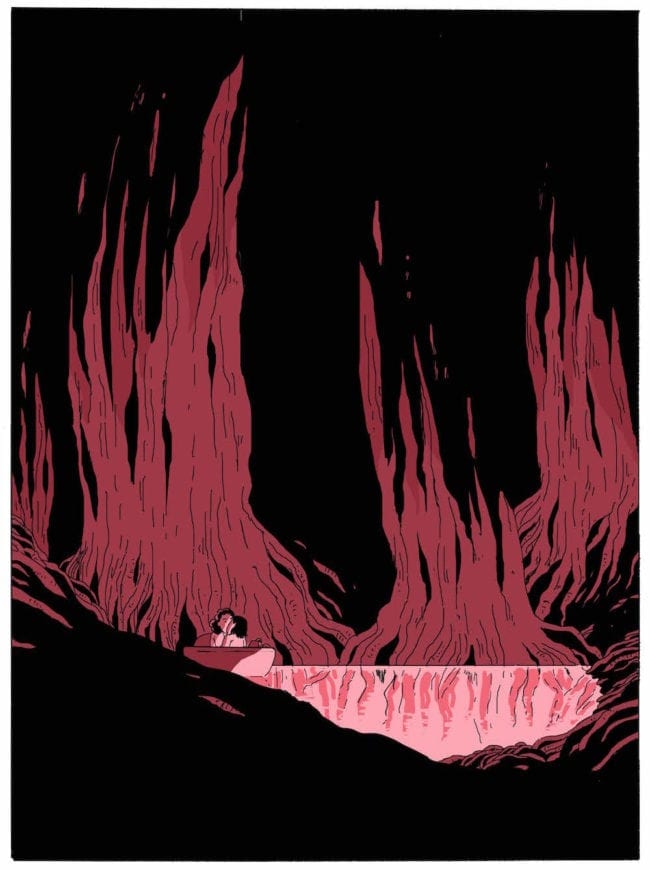 Mostly, dear reader, you want to find out. OAS features some genuine, interesting sci-fi world-building that sparkles and intrigues, like the deep space planet called The Staircase. Different readers value different aspects of stories, and I know that some readers care about characters above everything else. But I do enjoy the small details, and in some parts of OAS they fell flat for me. We never really get a good look or understand any of the work anyone is doing, despite a lot of talk about it. Desirable resources are described as “healing rock.” That's not terrible, but it's not terribly interesting.

OAS is not a taut 533 pages. It meanders, but even at the slackest points, with the least conflict or plot, it’s interesting to observe the characters and what they’re up to. When things heat up towards the end, I found the sudden introduction of hand-to-hand combat somewhat jarring and out of place with the rest of the book. If a space opera breaks 95% of the old rules, then why not just break all of them?

Whatever issues I have with the story, they’re small in the context of the larger work, which still makes for an immersive and satisfying read. The art is compelling and Walden excels at digital color. Comparing the digital version with the printed book, it’s clear where Walden made small changes to further emphasize how different color palettes represent different timelines. In sections where Walden cuts between the past and present, color really helps differentiate between the two. 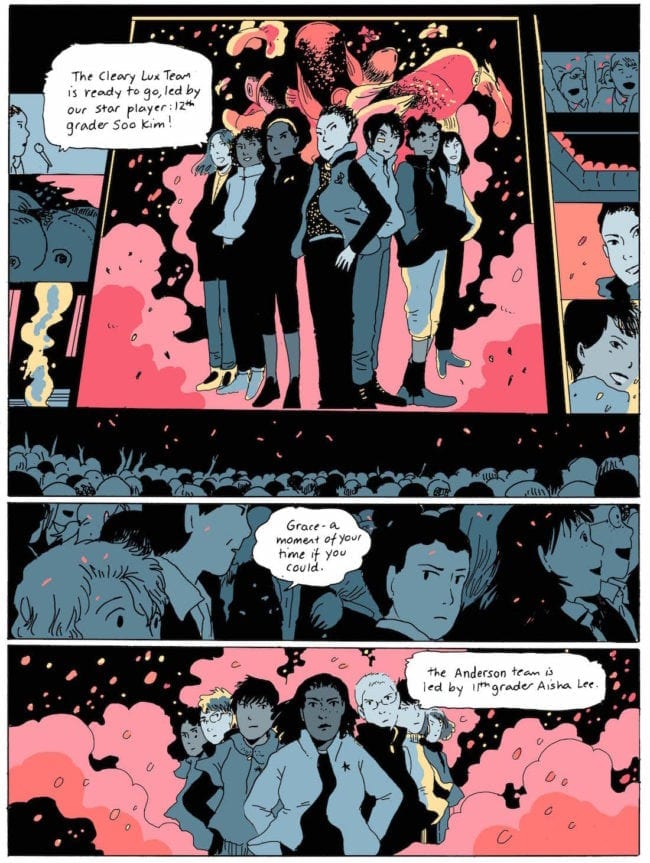 In print, as is often the case, the colors are more saturated — both darker and richer than on the computer screen. This is both a positive, like the bolder, more orange, yellow hue, and negative, as with the dark blue. There are scenes in the book where you can barely make out which character is which because the blue is so close to black. Like some of the very best cartoonists, Walden uses black to great effect. White is often used sparingly, as an accent, bringing out the twinkling stars throughout the book.

If I hadn’t known that OAS was first published online, I’m not sure I would have guessed. Though Walden has said she drew it intentionally to be read while scrolling, the rectangular page-size seems to have ported over easily into print. CCS’ curriculum emphasizes completion and requires students print and bind multiple copies of each project. There’s a lot of consideration for the print reader and concepts like the “page turn,” in which the author paces a book so that the reader will feel compelled to literally turn the page. Those are rare here, but it doesn’t bother me.

Walden really shines when rendering clouds and beams of light. The book is full of these atmospherics and they make for really striking compositions. She has a strong grasp on gesture and anatomy, but many of the characters have similar faces. Every single character in the galaxy, despite various skin tones and hair styles, has the same cherubic nose and slight build. Walden also relies on one consistent line thickness throughout. This thin line is spectacular for architectural details, but far less effective for things with more mass, like spaceships. The ships can look tinny and insubstantial. Similarly, the few explosions and wounds didn’t look dangerous to me, just scratchy. 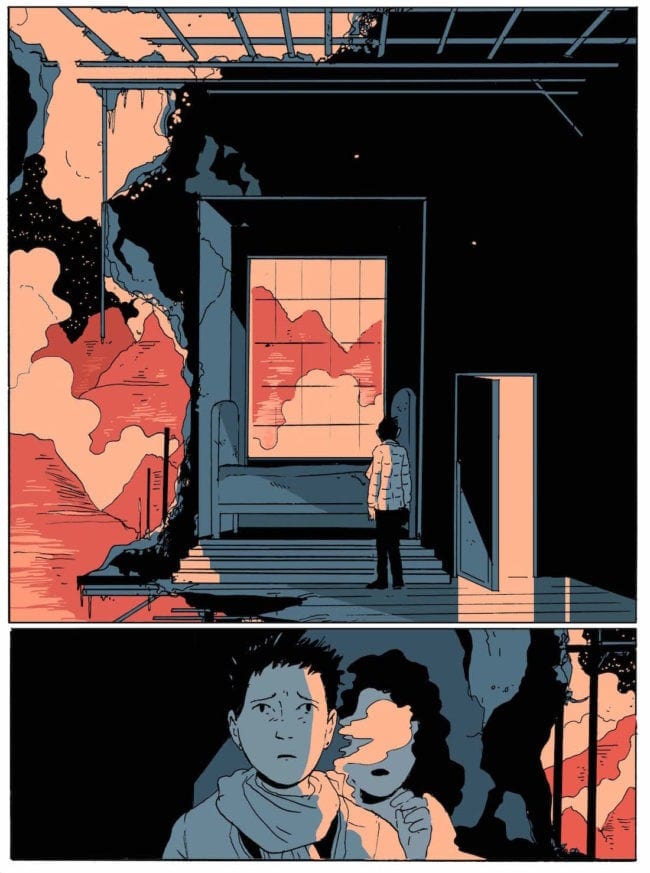 I think the book, drawn quickly and then lightly edited for print, could have been tightened up. But as a graphic novel, it’s still a fun read and a crazy-impressive testament to one young auteur’s creativity and work ethic. Like many indie cartoonists, Walden is very online, and is a fierce promoter and cultivator of her audience. They value not only her most polished illustrations but her improvisational drawn diary entries. The idea of growing in public, born out of zine culture and continued today on social media, rewards vulnerability and sharing everything. Many of Walden’s fans will want to own this book as a document of this stage in her ascendant career. It’s also good enough that a casual reader, picking it up with no context, will enjoy the art and story. 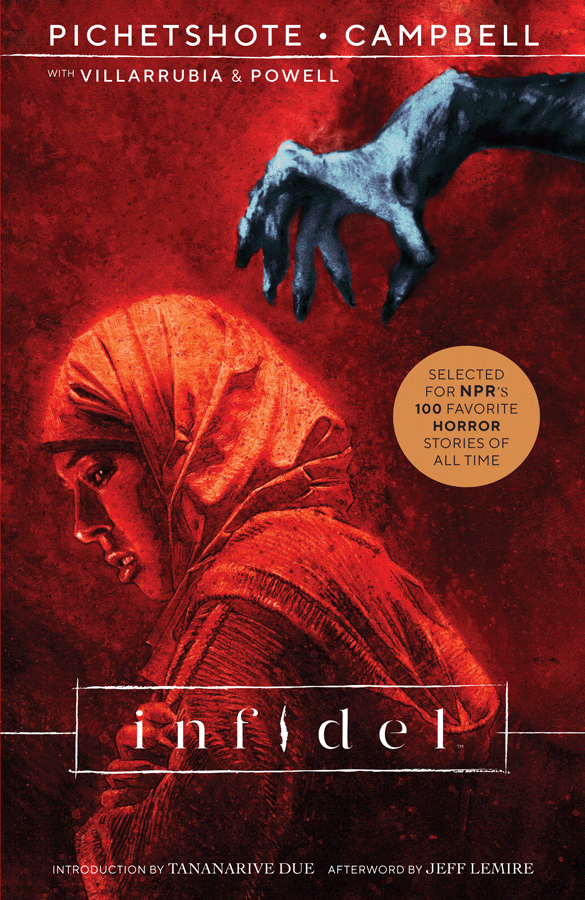 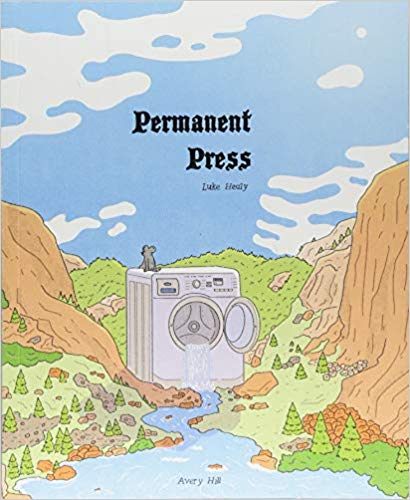