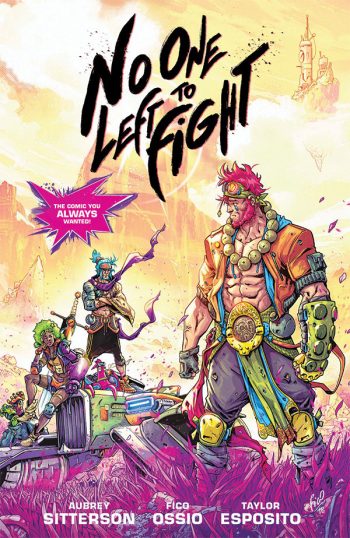 What we have here, basically, is an expression of shōnen battle manga ideas in a western comics register. A while ago, the world was saved from peril by a team of adventurers, though much of the credit and celebrity went to Vâle, a rippling red-haired naïf whose lack of emotional maturity is still met with indulgent affection by most, though he's starting to piss some people off. Chief among those is Timór, the hot-blooded Joe the Condor of the team -- yes, I know he's Vegeta, but these archetypes transcend you, me, and Akira Toriyama -- who verily has settled down to domestic life with Krysta, the spunky girl technician whose affections, he fears, will become alienated in proximity to the acclaimed Vâle. No matter: the three are headed out now on a road trip to visit the site of their final battle against evil, meeting old friends along the way, and sometimes aggravating old tensions. The trip is ostensibly for Vâle's emotional well-being, but lately he has been beset with debilitating hallucinations of what appear to be parallel lives, and it scares him. He's also being followed by the Hierophant, potentially the world's last supervillain, whose goal is to coax a hardier evolution of life from the mush of the present, like flowers fruiting in a soft corpse. This is not necessarily a metaphor; Vâle is growing physically weaker, and he does not understand the malady that afflicts him. You probably wanted to escape reality for a minute by reading a review of an action comic, and I'm sorry. 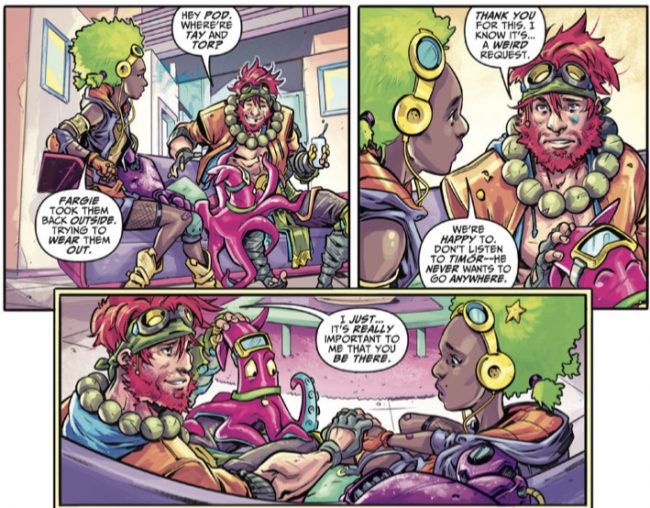 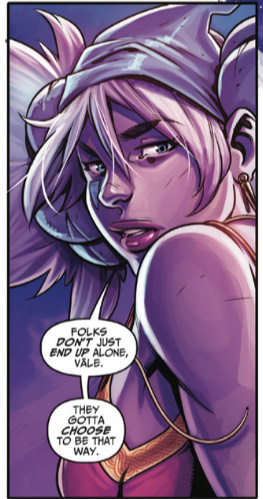 As should be evident from even a slight glance, this is not actually Dragon Ball-in-memesis or anything precisely in that lineage. The artist, Fico Ossio -- he draws and colors, with some additional color work by Raciel Avila, and lettering by Taylor Esposito -- works in what strikes my old eyes as broadly reminiscent of Wildstorm's old anime-touched Cliffhanger division with Joe Madureira and Humberto Ramos and the like. Ossio has drawn some Spider-Man comics via IDW's "Marvel Action" line, and he did a considerable number of pages early in the '10s for the indie costumed heroine title Critter, but much of his recent output has been in toy license comics: Transformers, G.I. Joe, and the briefly-inescapable toys-to-life gaming franchise Skylanders, which may inform a bit of the worldbuilding here. Every character rattles with gear and decoration, piloting vehicles that feel like they were heavily merchandised, though such toyetic character only functions as the conceptual chassis; that is to say, on a visual level, it gives the comic the texture of a mega-franchised children's media property, from which the plot itself can knowingly digress.

The writer, Aubrey Sitterson, has also scripted some toy license comics, including a richly controversial run on some G.I. Joe titles, but I know him primarily through his thousands of pages of work in manga localization, whereby a writer massages a raw JP-to-ENG translation into something that reads naturally in English. A major component of that type of writing is problem-solving, and No One Left To Fight often feels absorbed by the compositional difficulties inherent to communicating a shōnen-manga type of story in a folded-and-stapled creator-owned American comic book miniseries package. You can read the whole first issue here, and much of it is charming. I liked the talking arthropod sidekick in shutter shades, whom I feel definitely had a novelty single released at some point, and I liked Ossio's tendency to use color-coding to direct the action scenes; there's a lot of purple distinguishing Timór toward the end of the issue -- purple is maybe the predominant color throughout the whole book -- but Ossio later uses red to distinguish Vâle, and intervening hues of blue and/or green to distinguish other characters, even when all the effects obscure ready identification from the drawing, transforming everyone into swirling beams of power. 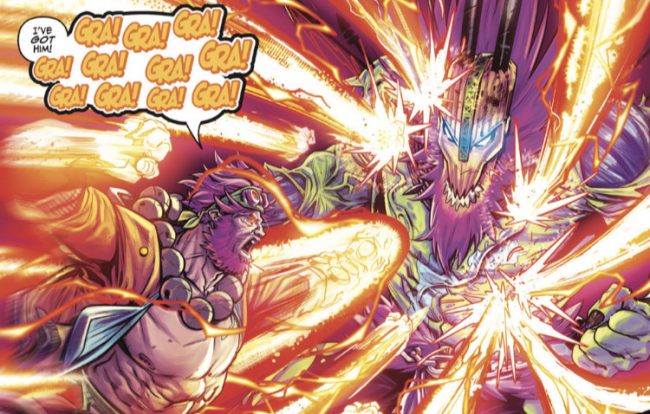 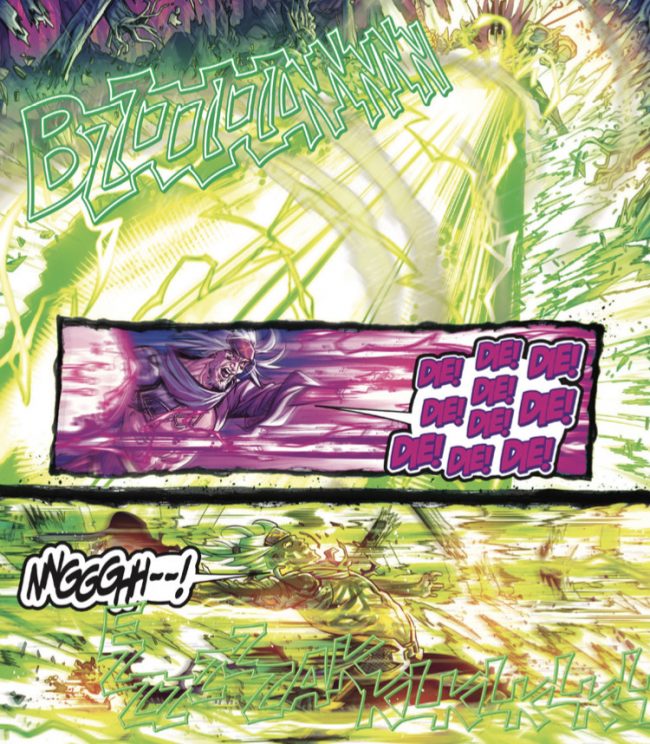 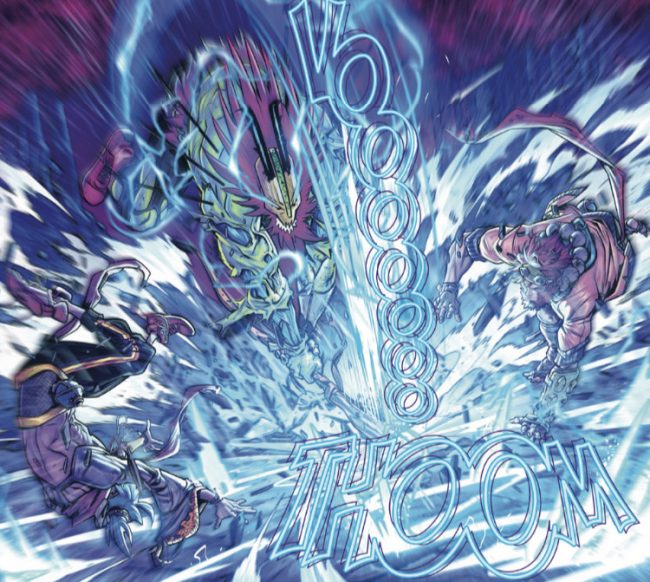 But also pay some mind to the first issue's middle, where the characters discuss their past. In a Jump manga, there would be a great deal of space here for a long, maybe allusive flashback to the character's past adventures; probably, the creative team or their editor would have one eye on the reader polls, and would be including lots of strategies to jolt those ratings, like catchy character moments or novel twists on the formula. This is not to say No One Left To Fight does not have such things, but when the characters discuss their adventures, they *discuss* them, and we watch them talk, because four of this book's five chapters only have 20 pages to work with; the fifth chapter, an issue-length character-revealing action scene, has 26, and feels very much like a splurge after a period of scrimping and saving. And why not save? This comic isn't running in a weekly magazine alongside tens of other titles, it's made to fight for shelf space in small stores filled with decades-old established properties running financial strategies that guarantee the strength of their numbers, and have frequently trained the reliable customers to accept establishment branding as the predominant mark of quality. I don't know what the financial situation the creators here have with Dark Horse, but if this were an Image series, they wouldn't even be getting paid until issues are getting sold to retailers; and then, with the first collected edition completed, you wait and see if it's financially advisable to continue onward. There is a joke in the supplements at the back of this book where one of the characters -- otherwise only alluded to in dialogue -- expresses astonishment that he hasn't actually been introduced yet, and entreats the reader to build up lots of buzz and sales. "The holidays are less than a year away!" he exclaims, which is a funny line, but a melancholic type of funny, because its sentiment is so familiar to anyone who follows creator-owned genre comics from these publishers.

Of course, No One Left To Fight is also a personalized take on the Dragon Ball type of manga, where the focus is on how the emotions of the characters have evolved upon separation from the grind of exciting combat. But this is not so different from the languor of something like One-Punch Man, a manga series aimed at a slightly older audience, that riffs on the dullness of assured victory in fight comic combat - but that series also has the latitude of pacing afforded it by manga publishing (to say nothing of its origins as a solo webcomic). This comic, by the nature of its being, has to play a very specific hand that's it has been dealt, and so it stores its energy for a final great blast of activity and ends on a cliffhanger bit of personal revelation that feels like the true 'start' of the concept, just as it enters its hiatus. I enjoyed the book, for what it is, and I wish its creators the best. As of this writing, there are no more new comic books of this type in American comic book stores. I hope the future brings new and strong ideas. I hope there is something better in store for creators than the rattling cans tied to the tails of the stapled monthly books; it hurts so much now to think of these fragile things. 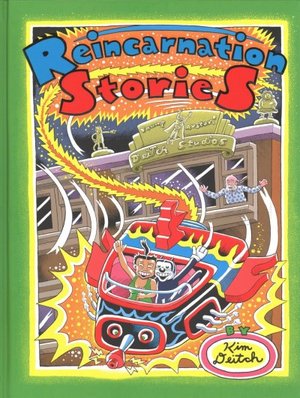