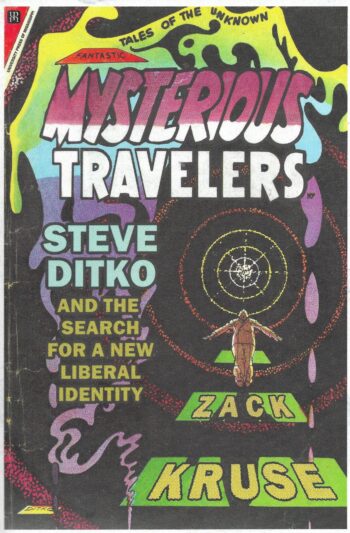 Mysterious Travelers: Steve Ditko and the Search for a New Liberal Identity is in many ways an event book for comics studies, a critical commentary on the works and philosophy of Steve Ditko that sets out to provide an extended theoretical analysis of a comics auteur with a focus and seriousness that many comics critics and historians have often insisted should be written, but do not write – indeed, The Comics Journal itself arguably exists to promote the advancement of such work. Unlike many books on comic book icons, including prior publications about Ditko, Mysterious Travelers is not a biography, a history, or a checklist, but a philosophical companion to Ditko's extensive body of work. Author Zack Kruse draws upon Ditko's writings and a historiography of American liberalism to advance an auteur theory of how Ditko's comics should be read. Kruse's approach will benefit readers of Ditko seeking a deeper and coherent understanding of the artist, and may well represent an approach worth emulating in future analytical studies of canonical cartoonists.

In the wake of the flood of topical post mortem publications on Stan Lee, readers of the Journal will be relieved to find that Kruse shifts the focus of his study away from Stan the Man, largely centering the discussion of Ditko's contentious collaborations with Lee on how the Mighty Marvel Method resulted in changes to Ditko's artistic intentions - and how often, when read for visuals alone, these intentions remain nonetheless apparent. Not only does Kruse thoroughly and assertively demonstrate, based on both evidence and interpretation, that Ditko is, in fact, the primary author of his comics for Marvel, he also argues that Ditko's artistic and philosophical intentions can be read into all his works, including those in which he is not the primary editorial or authorial voice. Kruse aptly demonstrates this intentionality in Ditko’s artwork via a reading of a comic which he had no input on beyond illustration: issue #4 of The Destructor written by Gerry Conway and published by Atlas/Seaboard in 1975, which contradicts the written narrative of a dystopian future menaced by a corporate villain with images that suggest instead, Randian imagery of the “rational, and polished” industrialist confronted by “slouching, disheveled, and overweight grotesques [...] the product of an irrational mob mentality”, dramatically revising the roles taken in the scripted conflict (30-32):

Ditko’s art contravenes Conway’s script, reinforcing Ditko’s own worldview instead of capitulating to the politics of the dialogue provided. [...] That Ditko was working from full scripts by Conway but still decided to tell a different story from the script, again, reinforces the primary importance of reading the formal elements of any of Ditko’s work -- be it a collaborative or more singular effort -- when teasing out an ideological message. [...] Ditko’s politics are presented visually. From this point, [...] we can extrapolate a way to interpret Ditko’s visual rhetoric and place it within the context of a larger political philosophy.

Comics is a visual medium, and Kruse persuasively argues that even when Ditko's distinctive voice is not found in the text of his comics, it can still be heard in the pictures. Kruse does not put aside the matter of the Marvel Method’s slippery record of authorial input, but demonstrates that Ditko’s intentionality can be discussed whether or not he is the primary author of a particular comic. This is an incredibly helpful understanding of how to read Ditko, and, more broadly, the very idea of the pulp cartoonist auteur. When we discuss the intention of an artist like Ditko, we are not only discussing works that the artist “chose” to create, but also works in popular genres which publishers hoped would appeal to mass audiences - and yet, intentionality persists outside of independent work. Ditko’s popular and independent comics speak to each other. Reading form and image is key, and in reading the art of Steve Ditko, we read a complex philosophical argument.

Moreover, Kruse rejects the perniciously common reading of Ditko's work as undergoing a shift (or degradation) in the late '60s when Ditko first encountered the writings of Ayn Rand - an interpretation which leads to Ditko's works often being praised despite their ideas and interpreted as a proxy for whatever the critic thinks of Ayn Rand. Instead, Kruse sees Ditko's philosophy as a complex and idiosyncratic articulation of ideological currents in American liberalism and libertarianism which he honed and developed over the course of his extensive career. Thus, the foundations of Kruse's study deftly resolve arguments of authorship that continuously plague discussions in American comics criticism, especially in discussions of Ditko.

Kruse situates Ditko in a philosophical context which he names "mystic liberalism." A catch-all for mystic and imaginative thinking in libertarian and liberal thinkers, as well as political theory influenced by mystic and religious literature, Kruse's mystic liberalism is defined as an ideology or aesthetic that emphasizes narratives of interior struggle; an allegorical dimension of capitalist individualism where even the rigidly defined rationality (and stated anti-mysticism) of Rand, Objectivism et al. gives way to magical and symbolic thinking (58-59):

[...] if we accept the general notion that neoliberalism represents a resurgence of nineteenth-century economic thought and laissez-faire capitalism, mystic liberalism posits a revival of nineteenth-century occult and mystic thought as it relates to the foundation of the individual through a decentralized, personal quest for the self [...] For mystic liberals, ultimate truth and knowledge are not granted, gifted from an outside authority, but are discovered, excavating each unique human conscience. Once these secrets and means to objectifying the cosmos have been established, then they become easily transmittable to other people who may discover the same secrets for themselves, and then those people can choose to accept or reject those secrets.

Kruse names Ditko a mystic liberal and breaks the themes of his works into three major elements: dark karma; cosmic intraspace; and the right to kill. Dark karma refers to a Western (mis)interpretation of karma popularized by the theosopher H.P. Blavatsky, an individualized natural law of cause and effect "principally interested in punishment for, and the cosmic consumption of, evil, not a restorative balancing of the scales." (74) A fascination with such mechanisms of cosmic justice as a site of ethical drama emerges in Ditko's earliest horror stories and recurs throughout his career. Cosmic intraspace refers to the "symbolic, interior realm[s]" which emerge throughout Ditko's oeuvre, surreal dreamlike places where "his characters are forced to plumb the depths of their psyches, facing their impulses and shortcomings, where they must choose to fight and exorcise those demons or succumb to them." (24-25) The right to kill is, of course, Ditko's insistence on showing heroes kill and criminals die, most notoriously expressed in the Mr. A. series, which Kruse argues ought to be read as expressions of a mystic allegory of the self: a psychomachian conflict wherein rationality contends with, overpowers and purges corruption and temptation. The allegorical reading is consistent with Ditko's own writings and lends greater coherence to the artist's vocal disgust at the "anti-hero" trend in superhero comics from the '70s onwards. Similarly, many of Ditko's heroes who do not kill, from Spider-Man to Shade the Changing Man appear as grotesques which terrify criminals by visually representing their grotesque interiority. These themes emerge throughout Ditko's works, and represent a career-spanning development and refinement of an allegorical story about the individual - an artistic expression of liberalism as a cosmic struggle for personhood.

Kruse is able to offer fresh and incisive perspectives on Ditko’s work, perhaps most impressively in his remarkable reading of Ditko’s The Amazing Spider-Man, which situates Peter Parker at the beginning of a young man’s journey from temptation by irrationalism to the embrace of clear moral principles - a journey picked up and continued in Ditko's Charlton superheroes, first by the Blue Beetle and later the Question. Presented as an arc of moral growth, Kruse leads us to recognize the connection of Peter Parker to the archetypical Ditko hero of subsequent works, from hapless newspaper photographer through reporters, journalists and TV anchors; moral adolescents become paragons of rational maturity. In allowing us a means to read Ditko’s Spider-Man as of a piece with Ditko’s subsequent heroes, we arrive at what may be the most coherent reading of such offered to date: an allegorical development of the rational mind. The strengths of Kruse’s reading of Ditko’s Spider-Man (somewhat hampered initially by an attempt to argue that Spider-Man and the Blue Beetle are literally the same character, a notion rejected by Ditko himself via correspondence with Kruse in 2014) hold true for his other interpretations and commentaries on Ditko’s major works - in identifying thematic, artistic and philosophical consistencies in Ditko’s work, Kruse is able to discuss the art and stories of Steve Ditko as they are, to the benefit of readers both faithful to and subversive of Ditko’s doctrine.

Where Kruse stumbles is in his broader discourse on mystic liberalism. The term itself is incredibly useful for Ditko, and I suspect will be of great use to further discussions of American comics and pulp to come, but his potted history of the currents in liberalism that feed into mystic liberalism is compressed to the point of becoming divorced from reality. Kruse is entirely reliant on primary literature and historiography to paint his picture of liberal philosophy, and it shows. A passage in which Kruse describes early development of what he calls mystic liberal thought in the wake of the First World War -- a hodgepodge of cultural appropriations from an imaginary Orient with Protestantism and American exceptionalism -- as a time of “diversity of religious experimentation” (45), despite containing some sketches of Eastern European immigration and class struggle, makes it clear that Kruse’s story of liberalism arises not out of material conditions and colonization but out of abstractions argued in a purely imaginative space. This is a minor, Marxist quibble for a book which ultimately is designed to assist academic and critical readers of Steve Ditko, but since Kruse claims that the book is in part “a means for positioning Ditko’s work as an entry point to broader cultural and theoretical conversation,” (32) it certainly bears mentioning. Moreover, this slightness and divorce from a material historical context ultimately has an impact on his reading of Ditko - a chapter on Doctor Strange begins with a prolonged and fussy speculation on whether the character was originally intended to be Asian, which could have probed more deeply in fewer words if Kruse had cited a relevant study of Orientalism such as Edward Said’s book of the same name, rather than a broad and mostly irrelevant bibliography of recent scholarship on African American representation in comics and graphic novels by Asian Americans.

Mysterious Travelers is a groundbreaking publication in comics studies which should resolve the question of Ditko’s authorial strengths and point clearly to the resolution of similar questions which have surrounded discussions of those many other cartoonists and graphic storytellers that have populated the pages of American comic books since The Funnies. Kruse deftly assembles a reading of Ditko’s entire body of work, eschewing debates of “primary” authorship, divisions of the author’s work into pre-and-post-Marvel, pre-and-post-Objectivist periods, and all the arbitrary qualitative criteria that come with these assessments, crafting instead a coherent and respectful narrative of Ditko the auteur: a lens which provides context for all of his works. However, I hope that from here, with a functional cartoonist auteurism now clearly demonstrated in practice, and with the Marvel Method’s malicious misrepresentation of the craft of its finest practitioners thoroughly debunked, we can now also begin to discuss an intersectional, collective history of comics as an industry and craft broader than the individual Great Cartoonists whose artistic voices still come to us clearest on the comics page. 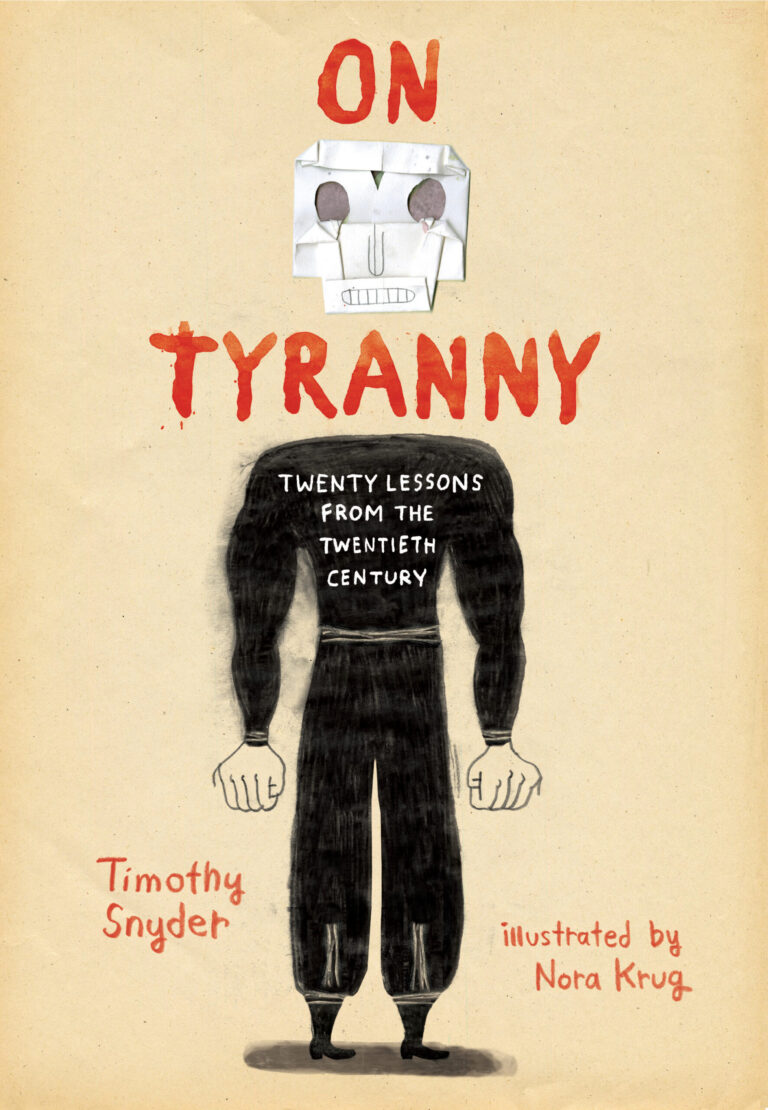 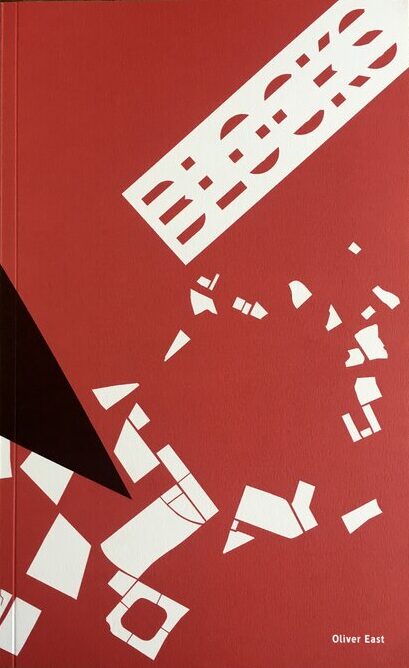