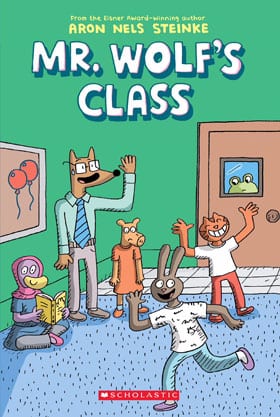 Mr. Wolf’s Class, Aron Nels Steinke’s latest graphic novel for young readers, takes place on the first day of fourth grade, when everything is new and exciting and also nerve-wracking—for teachers and students alike. Steinke draws upon his experiences as an elementary educator, which lends authenticity to the story, and features delightfully anthropomorphized versions of himself (as a wolf, obviously) and the rest of the cast, adding an extra layer of cuteness and fun to the proceedings. Although the word “charming” will be (quite correctly) used to describe the book, its quiet championing of inclusivity and tolerance are seriously welcome in our current, scary political climate. It's a book that young children (and quite a number of adults) will find irresistible.

Steinke originally drew “Mr. Wolf” as an autobiographical webcomic for mature readers, presented in brief, generally one-page installments. In those strips, the antics of the kids were seen strictly through Mr. Wolf’s/Steinke's bemused, occasionally bewildered, but always appreciative eyes. The strip also explored the hard work and more-than-occasional angst involved in being responsible for teaching young children.

For Mr. Wolf's Class Steinke changes the focus, not only including but giving priority to the perspectives and experiences of the children. The story begins with some nice cinematic establishing shots of Hazelwood Elementary, nestled near the woods in a Pacific Northwest community. We are then introduced to Mr. Wolf, who, in a series of silent panels, is working hard to transform the current disarray of his classroom into an attractive, workable space. I’m not sure most people know that elementary schoolteachers actually have to do this janitorial work. It’s a good detail to include.

Steinke then cuts to bedtime, the night before the first day of school, economically introducing us to all seventeen of the kids who will be Mr. Wolf's charges. Among the major characters: sweet-natured Sampson (a frog), strong-willed Aziza (a duck), rambunctious Abdi (a cat), sleep-deprived Penny (a piglet), and extroverted new student Margot (a rabbit). 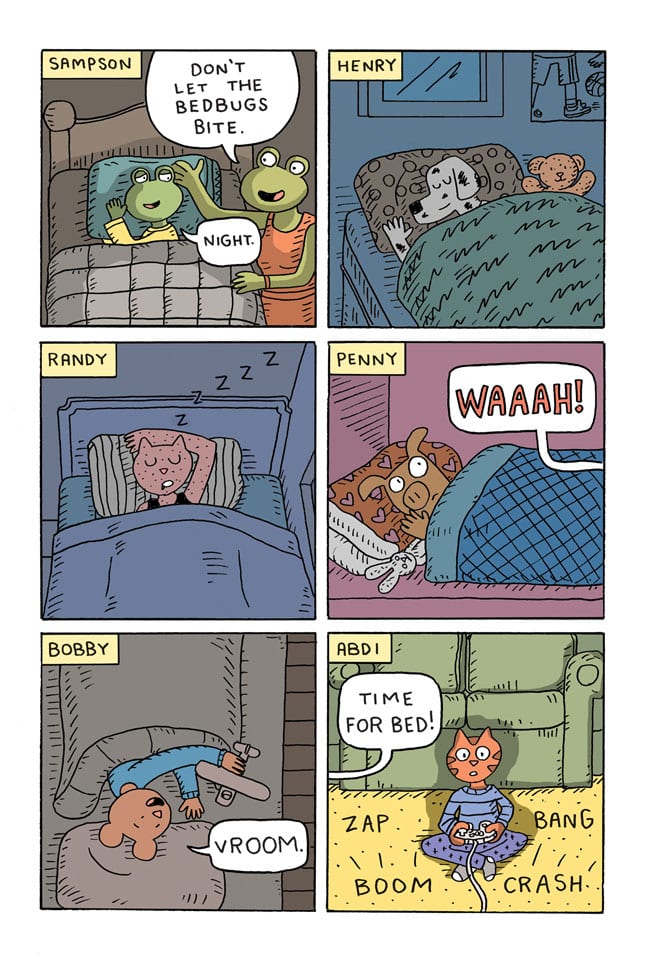 The first day begins with Margot waking up in her new home, so excited to get to school that her father has to remind her to change out of her pajamas before heading out to the bus. Meanwhile, Sampson has a rough time getting to school because he really needs to use the bathroom, while Penny is sleep-deprived because her new baby brother cries all night, and Aziza, obviously somewhat of a grind, has to figure out how to show her thought process for solving math problems (“How you got the answer is just as important as the answer itself,” Mr. Wolf reminds her).

Throughout the day, Mr. Wolf tries to keep abreast of his charges, not always successfully, while the kids make friends, bicker amongst themselves, and participate in the time-honored tradition of show and tell. The kids’ interactions feel particularly authentic. Other than a student who temporarily goes missing (in a lightheartedly fraught episode), the narrative focuses on the quotidian moments of an ordinary day at school; bigger, more dramatic moments (especially at the very end) are played for laughs. Steinke’s sense of humor is equal parts silly and empathic, not only towards the kids, but to Mr. Wolf as well, who makes his own mistakes here and there. Throughout, there is a quiet celebration of diversity. Though his cast is anthropomorphic, it is clear that the characters are of different races and backgrounds, and they all get along reasonably well. Note the unobtrusive messages seamlessly put forth in this panel: 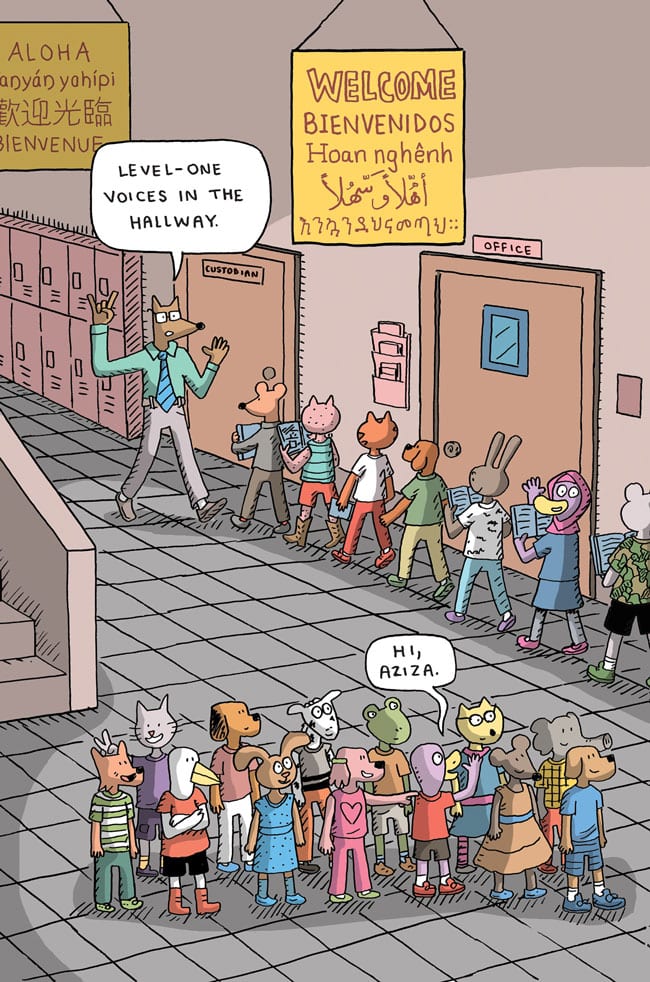 Steinke is a natural-born children's cartoonist: even in his work for mature audiences, especially his wonderful autobiographical Big Plans minicomics series, his drawings have always had an endearing, innocent quality—even when his characters are saying and doing not-so-innocent things. They bound about energetically against detailed, often heavily patterned landscapes, while his leisurely pacing invites readers to sink into his narratives. Steinke's comics are instantly recognizable, contrasted both with those of other indie cartoonists and those drawn for all-ages audiences. Though he had created a few smaller press books for children, among them Neptune (2009, Sparkplug Books) and The Super Crazy Cat Dance (2010, Blue Apple Books), his career really took off with the Eisner Award-winning The Zoo Box (First Second, 2014), co-created with his wife, Ariel Cohn. Working with Schoolastic brings his career up to yet another level. The last page here offers a short preview of the class’s next adventure, Mystery Club. I have little doubt it will be as winning as this first book. Mr. Wolf's Class is funny, heartfelt, and completely charming. 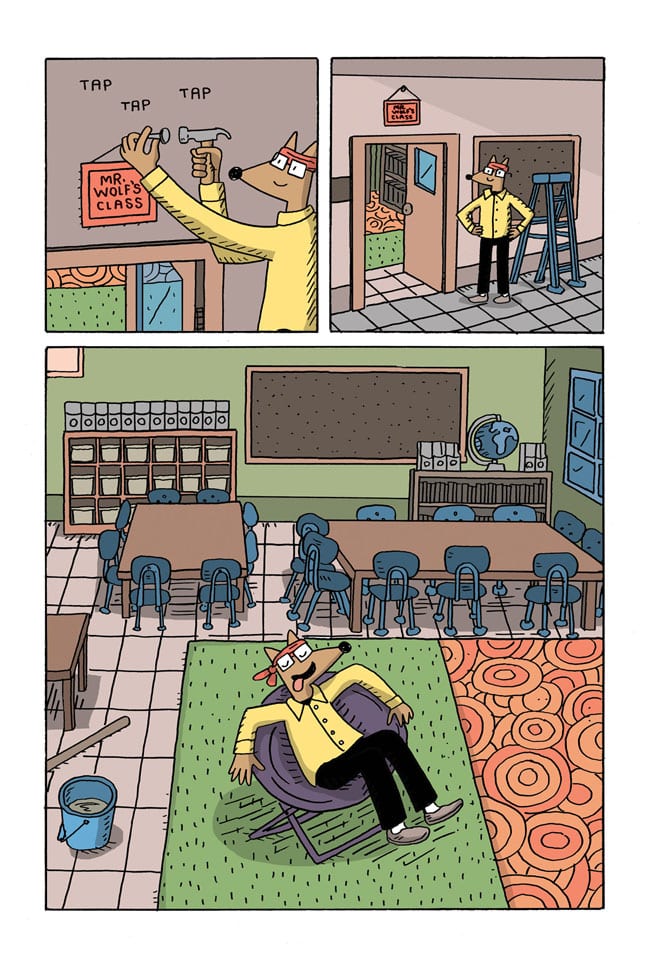 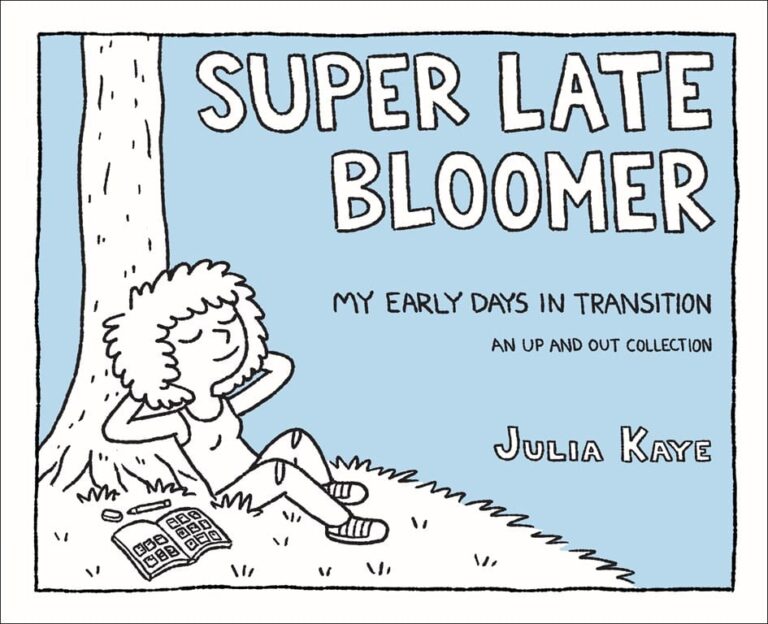