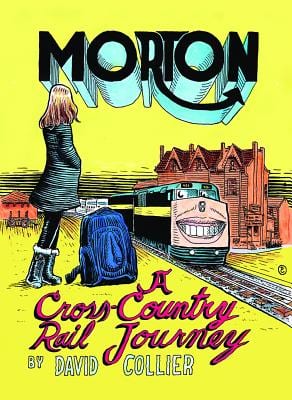 It’s pretty wild to remember that we have a foreign country right to the north of the United States! That’s only a little bit of a joke, given the familiarity of various Canadian metropolitan locations to television audiences the world over. The view of Canada we get here in the States is that Canada is just . . . well, I guess you could say the attitude my public school education held towards Canada was that Canada was there, and that it wasn’t usually a threat. Canada, land of Tim Hortons.

And, of course, that’s a plainly asinine thing to believe. Americans are terrible chauvinists! I only happen to know a few things about Canadian history because some of my favorite cartoonists are Canadian, and as such to be completely frank I am still embarrassingly devoted to Chester Brown’s Louis Riel. So it’s actually remarkable, considering how thoroughly strip-mined even the least notable events of the United States settlement period are for media and historical retelling, that Americans remain so magnificently ignorant of similarly interesting events north of the border. For a citizen of the United States, Canadian history is fun to read about because it’s completely unknown. No one ever teaches us anything about this stuff.

That’s how a book like Morton creeps up on the unwary reader: even if one or more elements in the book fail to cohere for you, there’s always something new around the corner. There’s a lot of stuff packed into these 156 pages, after all – family histories, national histories, national myths, natural history, personal anecdotes. I would be lying if I said that the initial premise of David Collier’s book held much appeal: a story of a family trip across Canada, mostly by train, briefly by canoe, plane, and car. But it not only held my interest, I actually devoured the pages at a fair clip despite it being a fairly dense read. I had never heard of voyageurs before reading this book, but now I want to live in a country where people make voyageur movies at the same pace we used to make cowboy pictures.

Inasmuch as I am familiar with the genre of travel writing, what often distinguishes good travel writing from bad is an attention to detail. Don’t give me anything I can get from another source: show me something unique that enriches my understanding of the world outside my immediate surroundings. In this case the humble trappings of a cross-country train trip hide a look at what is actually an alien world of civic spaces similar in many ways but dissimilar in so many others from our own here in the States. 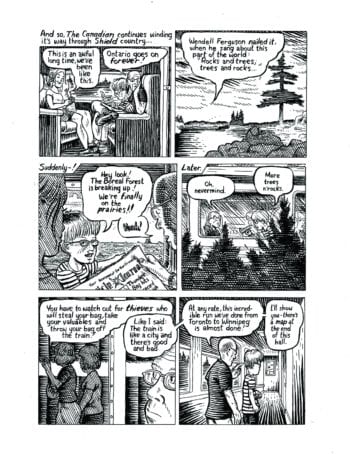 Canada started off with many of the same ingredients as its southern neighbor, but came to slightly different conclusions. In the case of trains, train culture held on stubbornly longer in Canada than in the south. Although much of the United States’ industrial infrastructure still runs on rail, trains are already almost forgotten in this country as a means of passenger travel. Apparently at least part of the difference in Canada was geographical: so many areas in the north and west parts of the country remained so isolated for so long that rail was and remains for many parts of the country the only practical solution. Still, Collier notes throughout the book that although rail remains far more prevalent in the north, the institutions that support it are slowly dying on the vine there as well.

The book is only partly about the trip. It is to Collier’s credit that the portrait of himself that the book draws is not entirely flattering. Collier in his own estimation is nervous and occasionally a bit boorish. He never misses an opportunity to draw a pretty girl. Collier begins the story in a bit of a slump. The very first panel of the very first page gives us the ringing of the phone to inform Collier of a death in the family. A little later we find out his most recent book has been rejected by Drawn & Quarterly, despite his long association with the company. (Later in the book Chris Oliveros shows up again, sort of, but I won’t tell you how Collier evens the score with his former publisher.) He hooks up with a newer outfit – Conundrum Press, also the publishers of the present volume – and they put out 2011’s Chimo.

On the heels of another death announcement the Colliers decide to take a trip across the country by rail. They set out to travel from Windsor to Churchill, Manitoba by rail (mostly), strapping on their backpacks and just hitting the tracks. I admit I balked at this, but perhaps this is a cultural difference: setting out cross country with his family armed with nothing but a train schedule and a military ID, Collier puts his trust in a number of military and civilian institutions constructed across the country for the express purpose of facilitating friendly travelers. Some of the policies are out of date and the family has to make up new plans on the fly – such as when they are turned away from the Naval Reserve Barracks in Quebec City that had traditionally offered lodging to military families. They take a bus to a campsite outside town. Things just seem to work out for the Colliers throughout the trip, due to a combination of David’s planning, the kindness of complete strangers, and a bit of luck, in a way I would hardly find credible were the book set anywhere but Canada. Colliers’ wife is a trooper, as she never seems to complain even when she’s soaked to the bone and carrying a canoe in Quebec. Perhaps this is another cultural difference. 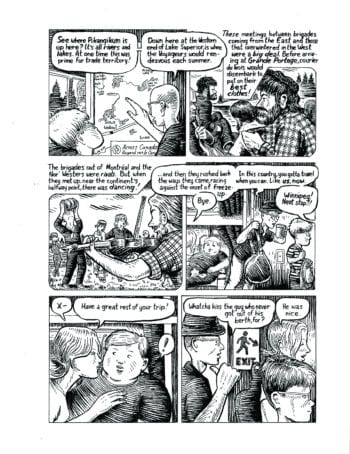 What I found most interesting about Morton was how Collier used the book’s density to mask a number of different narratives. The first narrative is the travel story, the second is a narrative about civil infrastructure across Canada, the third is a piece of an oral history of a transitional moment in Canadian comics culture (a transitional moment in all English speaking cultural institutions, I hasten to add). The fourth and perhaps most interesting narrative – and interesting precisely because of its nested quality, hidden within the other three – is Collier’s own crisis of confidence around getting older.

That’s what propels the story, after all: a series of deaths in both the immediate family and his professional circles prompts him to do something he’d been wanting to do for quite a while. Part of the incentive is precisely that so many of these institutions appear to be disappearing before his eyes. The minor bits of trainspotting lore that pop up throughout the book already seems like signs and symbols translated from a bygone age.

Getting old kind of sucks. Collier works within the honorable and fertile tradition of non-fiction comics driven by the character of a first-person memoir. Collier drew some stories for Harvey Pekar, and if you understand the format of American Splendor you’ll get the appeal. It’s a genre that attracts kindred spirits to Pekar, iconoclasts who ground themselves in regionalism as a means of authenticating their voice. Collier doesn’t spend much of Morton geeking out in antiquarian shops, but he does eventually come across some old comics and an antique “portable” record player – his wife does actually point out it’ll be a hassle to carry that home, but he buys it anyway.

The book is haunted and one of the major revenants is John Morton. He was one of Colliers’ best school chums but he died of a terrible disease. Collier exercises ever day, considers it a place of price to be able to still fit into his sappers’ uniform. He places a lot of importance on physical fitness throughout the narrative, even down to having to find places to quietly perform calisthenics on a passenger train. Every male autobiographical cartoonist is preoccupied at some point with questions of masculinity – certainly, one of the defining themes of Pekar, R. Crumb, and Chester Brown’s autobiographical work. There’s another historical process here that is possibly invisible for younger audiences – signs and symbols translated from a bygone age. 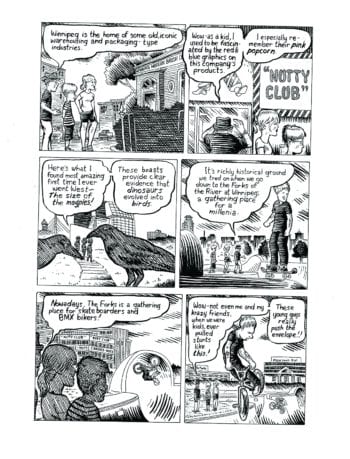 The virtues of Colliers work – the attention to detail, the excoriating honesty, the use of the devices of literary regionalism to ground narrative – are virtues that arose out of a defiance both to mainstream commercial norms (Superman and Donald Duck and the like) as well the hedonism of the Underground scene in which many of the early cartoonists who work in this style cut their teeth. Collier’s own physical vitality – he’s doing better, at the time of the events of the book at around age fifty, than I am now about a decade and a half younger, I’ll say that – sits uneasily next to the delicate and detail-fixated cartooning, an intentional juxtaposition. There is anxiety in Collier’s lines, the anxiety of a man growing older in a field where these kind of crosshatch-heavy personal narratives struggle to find purchase, in an industry where his style no longer carries the kind of literary gravitas it perhaps did when the comics industry’s idea of literary was solely defined by opposition to Superman and Donald Duck.

And there’s nothing at all wrong with that. What Collier chronicles throughout Morton is not just the speed with which technological and social changes can transform a society but the anxiety that exists at the very real chance of waking up and one day finding yourself on the other side of said technological and social changes. His book gets rejected by Drawn & Quarterly so he goes to a younger, hipper publisher where people are having fun and his reputation as an elder statesman in the field carries more weight than the fact that his wife babysat Oliveros’ brothers’ kids. He makes not one but three references to Woody Allen, the final of which places the recurrence in a revealing context: not really knowing whether or not its OK to like Woody Allen movies anymore after having grown up with them. John Morton (consciously in this context the “Gallant” to Collier’s “Goofus”) turned his back on Allen after it became public that he was dating his stepdaughter.

Collier’s emphasis is interesting because it’s clear that he’s not quite sure whether he’s right or wrong to keep quoting Annie Hall after he’s already been doing it for decades. Can things have really changed so quickly as all that? Collier doesn’t necessarily like the answers but he’s smart and still spry enough to know that you either change with the times or get decommissioned for good. 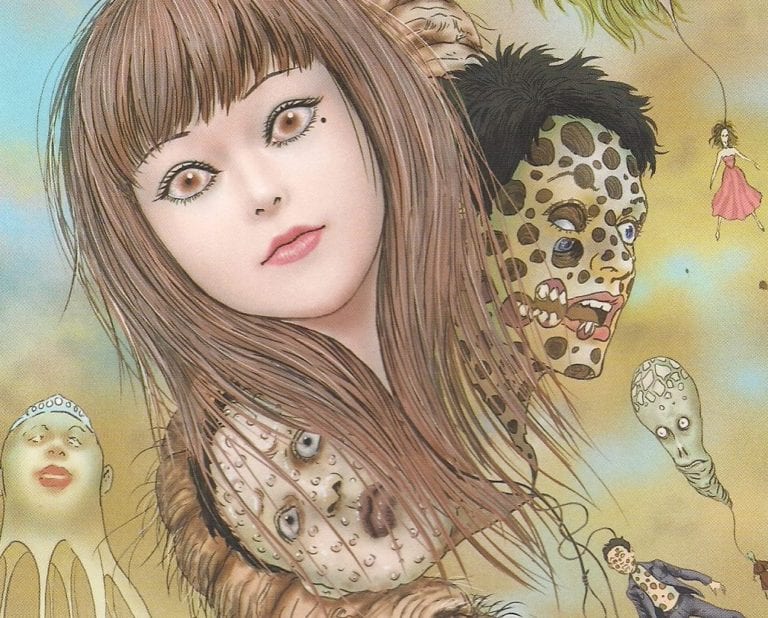 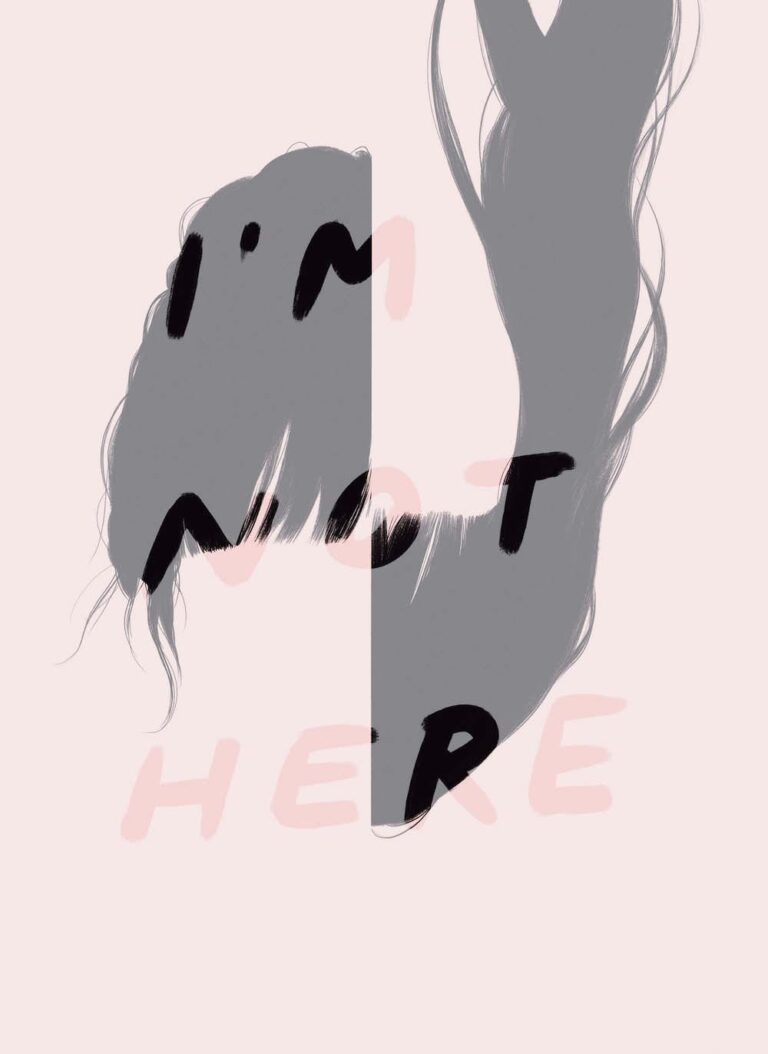