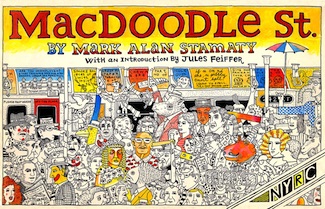 Mark Alan Stamaty’s comic strip MacDoodle St. ran in the Village Voice from 1978 through 1979. While Stamaty is perhaps better known for his work as a children’s book illustrator, creating detail-filled work for readers to pore over, his strip displays him as a funny cartoonist, continually finding new ways to delight his audience. Each strip is framed by a border that sprouts multiple tiny figures, like Saul Steinberg working with a single line, in decorative miniature. Aiming to tell an extended, proto-graphic-novel narrative, all of the jokes he tells unspool a complicated plot that can’t be derailed for the sake of an easy gag. The story gets told via a large amount of text in each installment, and reading reveals a language of verbal and visual puns. Frequently a panel will be based around a literal illustration of some idiomatic language in the narration, as a way of making jokes while keeping the plot going. This generates a tone of self-consciousness, that in turn becomes generative as the strip goes on. After a few weeks where the strip is referred to in editorial asides, the strip itself emerges as a character within the strip, becoming depicted in various ways. The strangeness of the layouts prefigures Mark Beyer’s Amy And Jordan strips, but with a higher level of detail: Depicting each panel as a cow in a stampede, or the strip as a whole as club people line up outside to get into. The pages themselves, dense with texture and pattern as well as lettering, resemble Gerald Jablonski at a glance. Stamaty exists as part of a continuum of “alternative” comics that bypasses the comic book format entirely, in favor of something stranger, with a harder to track history. 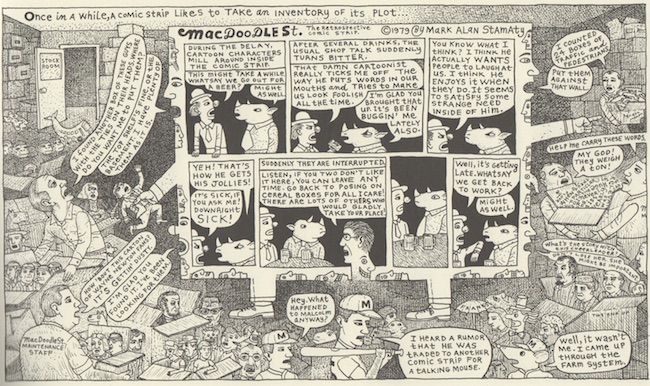 MacDoodle St. provides an illustration of Chris Ware’s dictum that “Drawing is a way of thinking,” albeit in a very different way than Ware’s work does. It’s more as if drawing and writing become a way of dreaming, and keeping track of these dreams over months, truths unconsciously known reveal themselves. This poetic, free-associative quality to the book’s plotting, borne from a desire to be amusing while still telling a story, leads to a plotline about a conspiracy to create a race of humans only capable of mindlessly washing dishes. This plot point is similar to the 2018 film Sorry To Bother You, but while that was explicitly constructed as pro-union propaganda, Stamaty comes to the same conclusions simply by being all over the place, and the consistent logic that emerges out of his seeming nonsense points an accusatory finger at a collusion between cultural conservatism and corporatism.

The work develops organically enough that you can see how he arrives at this point from the first few choices made. The strip’s main character is poet Malcolm Frazzle, whose work appears in a magazine called Dishwasher Monthly. Frazzle has a monthly deadline, and Stamaty has a weekly one, and the precarity of their situations creates the strip’s sense of working-class urgency. The initial conflict is between the cafe Frazzle hangs out in and “The Conservative Liberation Front,” people with conservative cultural tastes who find it offensive. (They’re Wayne Newton fans, which is a joke I’m not going to pretend holds up.) They end up being a front group, the patsies of a larger agenda. The story digresses, its scope expands, and the conspiracy plot feels arrived at honestly. One installment hinges on the main character “Voiding where prohibited,” i.e., pooping in a restroom marked “for customers only” when he has not bought anything yet. This is the sort of joke that comes from the strip’s attention to illustrating how language works, but also: It sucks that you can’t walk around in public without being forced to pay money to use a toilet! That’s life, and it’s more annoying the less money you have. Major characters are introduced to the narrative as people Malcolm meets while riding the bus. 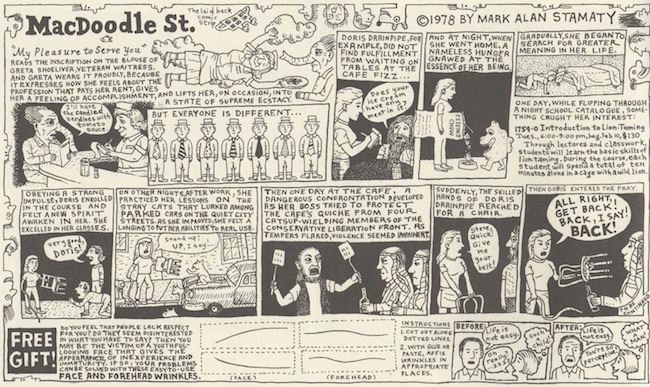 This sense of a conspiracy, the evil that the antagonist embodies, emerges simply from identification with the protagonist, and observing the world he lives in. The strip ends up possessing a certain working-class, intuitive understanding of power, the kind you don’t see in the bourgeois social novel. You see it in Pynchon, and you see it in science fiction and crime novels. Here, it emerges not from deliberate attempt to create a three-act structure, but by the associations of thought that form the logic of poetry. I’m aware people consider poetry to be pretentious or elitist, but the fact remains there’s no money in it. Comics, working at their best, where words and pictures comment on each other without repetition, carries within it a similarly intuitive associative consciousness.

Salvador Dali described his creative process as the paranoid-critical method, and Stamaty’s work seems to use a similarly heightened sense of self-awareness. This ends up unworkable in the long term. As the book goes on, the narrative tightens, and while it’s clear throughout that Stamaty has anxiety about each installment keeping the narrative going, he also understands the strip draws its power from being free-wheeling and digressive. Shortly after the dishwasher defeats the fast food CEO in hand-to-hand combat, the anthropomorphic depiction of the strip itself becomes the central character, expressing his exhaustion and desire for a vacation. The self-consciousness that drove the comic became paralyzing. The New York Review Comics collection, issued in 2019, forty years after the strip’s initial appearance in the Village Voice, contains an afterword by Stamaty explaining that he ended the strip not long after the plot wrapped itself up after a run of a little less than two years because he felt paralyzed by the expectation to be funny, and the impulses to be funny and still keep a plot going had made drawing the strip time-consuming. He took time off, and eventually began doing more personal, less labored-over work, under a different title. If I understand his description correctly, some of these strips don’t have understandable language at all. I haven’t seen these strips, although it seems like NYRC is interested in publishing a reprint of them in the future. Stamaty, discussing this work, views it more in the context of poetry, in terms of the people who liked it and what they praised it for.

MacDoodle St. is itself poetic, as well as funny. While its working class protagonist at odds against corporate conspiracy feels resonant in 2020, do not think for one minute that it’s some sort of long-form editorial cartoon which will primarily appeal to those who agree with it. The pleasures it possesses are related to it as a true alternative, unlike any other comic of its era. The casual sense of understanding daily life it possesses is inextricable from its truly ecstatic sense of invention. You can believe in the radiant horizon it promises for the future of the medium. 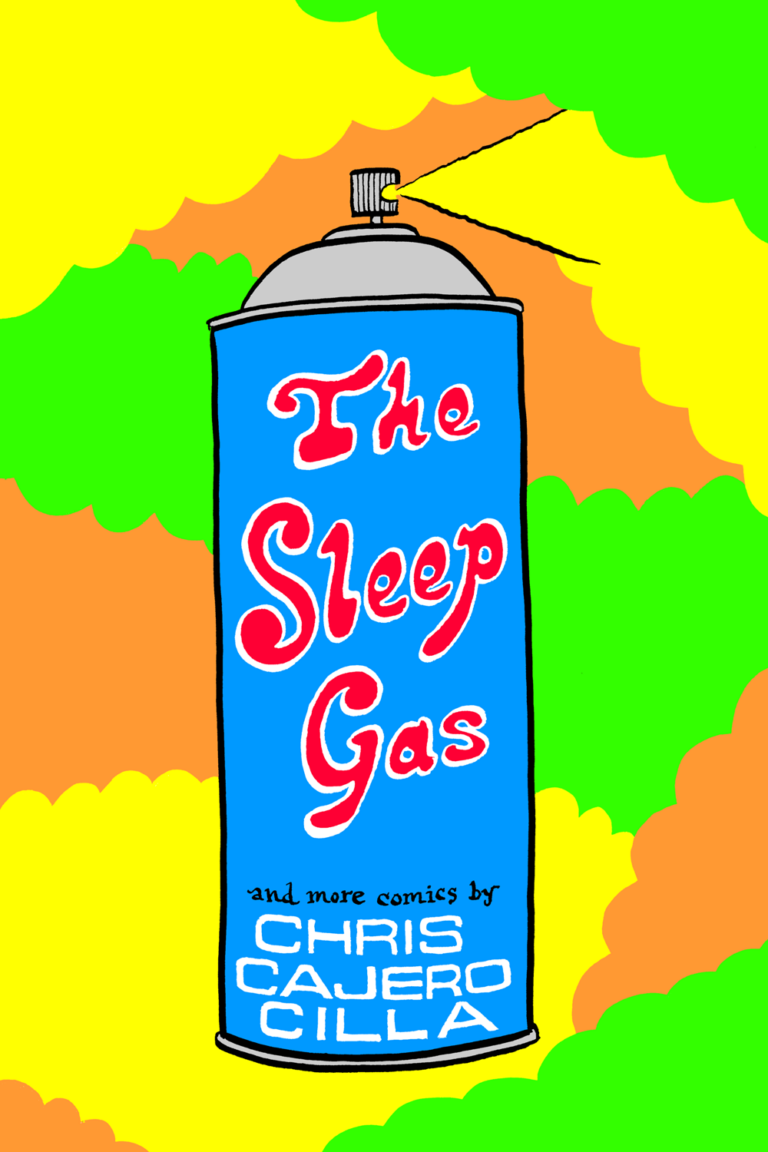 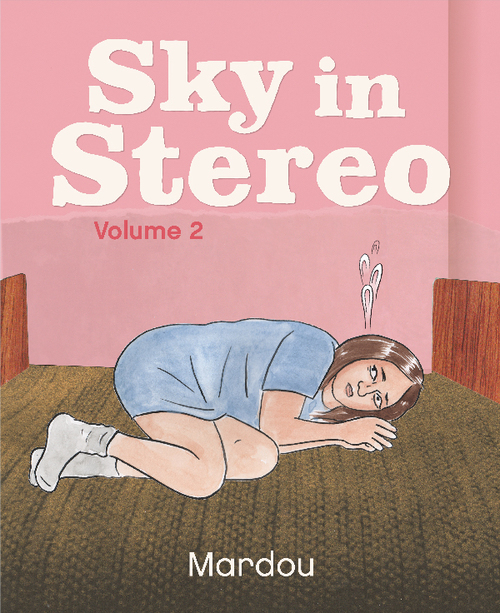