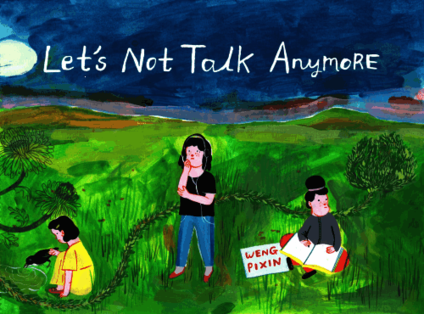 Weng Pixin’s Let’s Not Talk Anymore is a circular and meditative investigation of the artist’s matrilineal family, going back three generations and forward one. Her great grandmother, her grandmother, her mother, the artist herself (with a different name) and her imaginary daughter take turns appearing on the scene, each clearly introduced with a panel that tells us what year it is. There’s something to be said for this device as a way to let us know where/when we are, as opposed to a subtler approach that might do so through purely visual means (variations in color palette, for example). I don’t always want to have to work super hard to figure it out, and this doesn’t have much of a downside. Each character is presented at the age of 15, mostly arguing with her mother.

Mothers and daughters, daughters and mothers. It’s possible that 15 is the peak time for divisions between them. Sometimes I think about the fact that young women tend to have their first period around the time when their mothers are heading toward their last. As daughters increase in fertility and beauty, mothers are on the downslope of the former and, by society's reckoning, the latter. It makes you realize why there are so many folktales in which mothers (bowdlerized to wicked stepmothers) are jealous of their daughters to the point of murder. The age of 15 is where this struggle is most intense, where the younger generation wrests the relay baton from the older one, thinking it can do better and believing in the power of its independence over the heaviness of the past (which sometimes extends to generational trauma). The young try to fix what the old broke before they break things in new ways. Anger increases over time, and those who were once sweet and helpful and accommodating children become harsher adults. 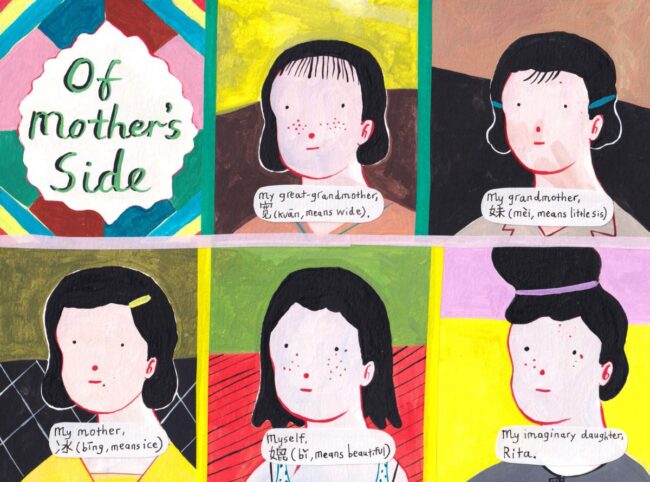 Weng needs the levity of her coloration lest her book become a complete downer. She outlines her figures’ faces and supplies their noses, mouths, freckles, and ear whorls in red, not black, reminiscent of the way one's flesh glows with life when held up against a light source. When their eyebrows and mouths point down in anger, it's cartoonish, but no less intensely felt. She throws in enough profanity to make a point, to make you feel again the pain of your parents’ disappointment in you, marked to some extent by their use of foul language. They're not cushioning you anymore. She paints each page and uses what looks like colorful washi tape to create the gutters between panels. Nothing is digitally smoothed over. You can see some dimensionality and overlap and reality that hasn't been Photoshopped away. And she has an eye for the small moment that sticks in your brain, 30 years after the fact: stealing eggs from under a chicken at market (taking what it thinks of as its future children from it), catching a cricket for a pet, examining the veins on a leaf, dreaming of running away with a stranger.

Conflict between generations recurs in each story except, possibly, the last one, which takes place in 2032 and braids fiction into reality. Kuān, the great grandmother, is sold into servitude because her mother can't afford to keep her. They're close, but the trauma that results from that act ripples down. Mèi, the grandmother, is adopted because her own mother (Kuān) ran off. Her adoptive mother does sewing (as does Mèi) and occasional sex work in the next room. A man sexually assaults Mèi when her mother isn’t around. It’s no surprise that Mèi is quick to anger with her daughter, Bīng, outwardly more prosperous but frustrated with being required to care for her brothers. Bīng’s daughter, Bi (i.e. Weng), has it even easier, but she’s still angry all the time, stuck in detention, listening to loud music, trying to draw out her feelings after she fights with her mom. Rita, in 2032, is the only character who’s relatively carefree, able to take her time with art, to have conversations with others, to understand and forgive, possibly because she’s the least connected to reality. 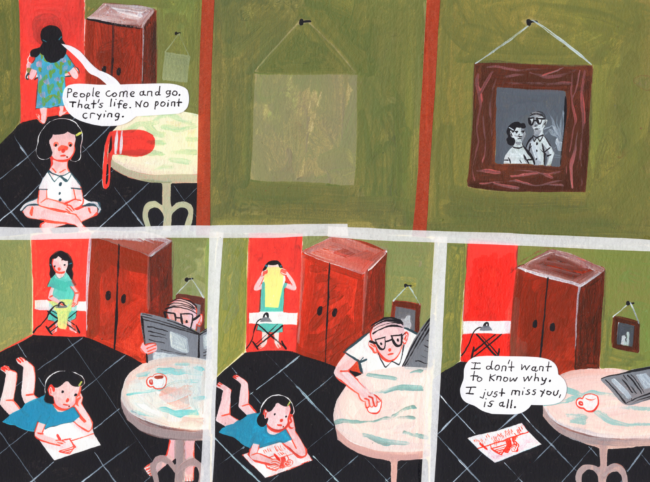 That story is mostly wish fulfillment, a hope that things will be different this time - that as we achieve greater comfort, we can have the room to be gentler to our daughters, that we can talk about our family history and learn from it, that young women won’t be treated like commodities and can have the space to breathe and grow at their own pace. Man, I hope so. The stories from the past don’t give us much hope for the future, but Weng doesn’t seem to be pessimistic. The slow care she puts into each page, enlivening it with floods and washes of bright color, suggests a sunrise rather than the same old merry-go-round. Rather than thinking the pain of the past should keep on being passed from back to back, she gently suggests that talking about it might eventually cause it to dissipate. 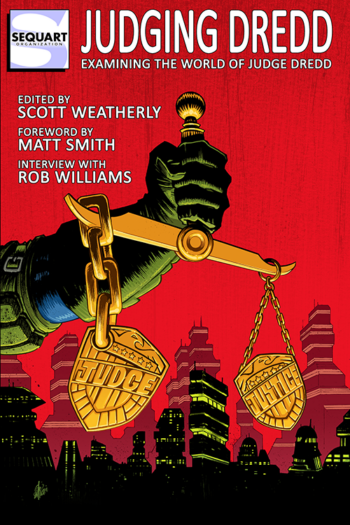 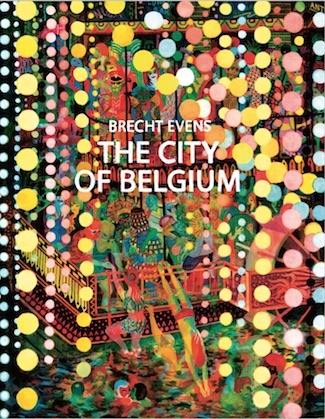