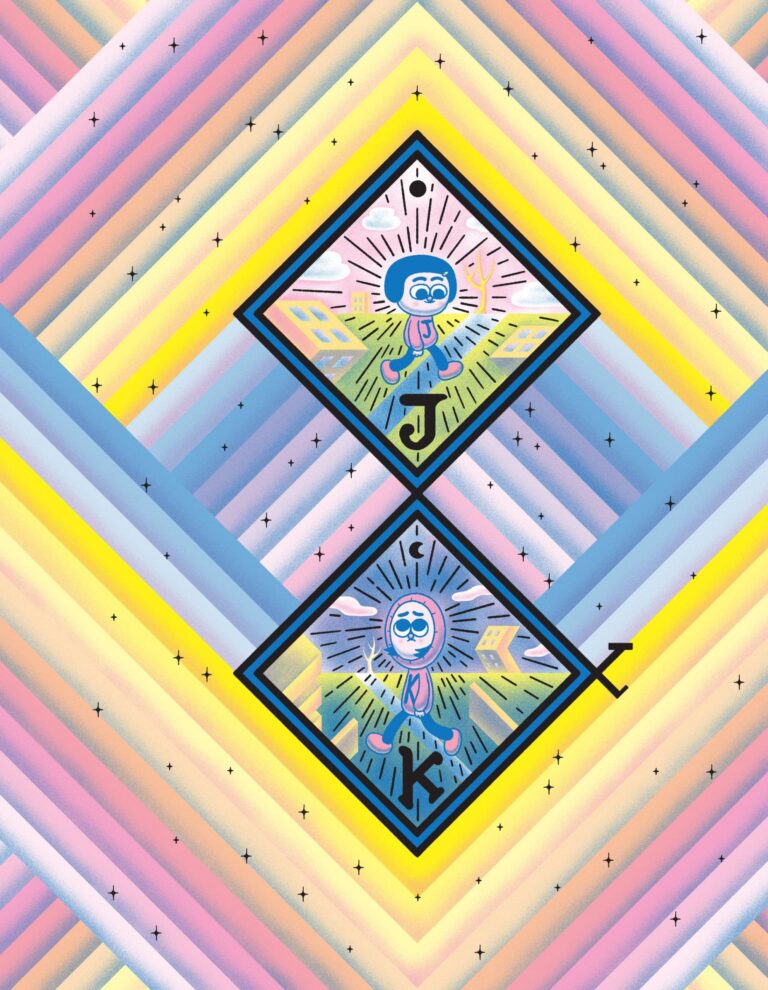 For the past decade or so, John Pham has been the hidden gem of American comics. In my opinion, no one did better work from a smaller platform in the 2010s, but 2020 has offered a swift corrective with J&K - which is somehow its author's debut graphic novel. Pham's career to date has followed a strikingly cyclical path. He surfaced in 2000 with the debut of his one-man anthology Epoxy, a striking fusion of American cartooning idioms with inflections of manga and Eurocomics that's perhaps best described as Chris Ware crossed with Paul Pope, minus the irritating authorial mannerisms of either. After three issues of Epoxy, in which Pham's formatting grew more ambitious as his storytelling choices coalesced into a personal style, the series was set aside for Sublife, a Fantagraphics-published annual whose landscape format and more restrained tone owed much to Pham's strange, fascinating diary comic Substitute Life. Sublife mostly ditched Epoxy's already-waning action beats for more focused attempts at carving out a space on Ware's level, drifting toward a smoggy, plainspoken space shared by Pham's fellow Angelenos Sammy Harkham and Jaime Hernandez. The series lasted only two installments, and when Pham returned after a multi-year break, Epoxy did as well. 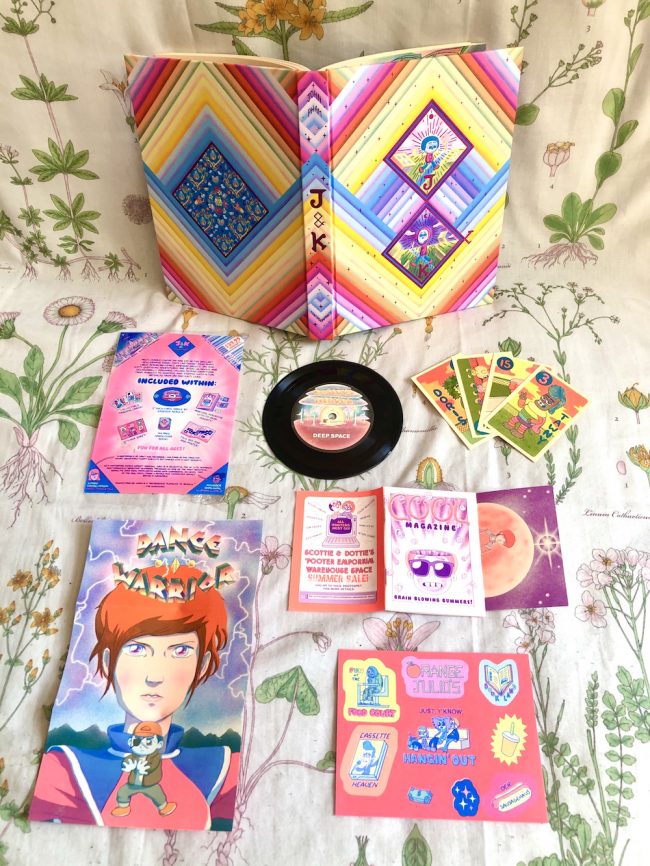 The "new" Epoxy, which the majority of J&K's material first appeared in, marked a shift in approach. Rather than continuing to fuse as many elements of disparate comics traditions as possible, Pham sectioned his interests off into separate containers. The continuation of Sublife serial "Deep Space", which began by deepening of Ware's few parodic spaceman strips with a dizzying psychedelia injection, took a surprising but logical bend into glacially paced, enigmatic genre material of a kind most often seen in Japanese comics, with Leiji Matsumoto's Space Battleship Yamato an obvious predecessor. "Deep Space" was accompanied by an all-new strip, "J&K" (sometimes rendered as "Jay and Kay"), a charming buddy comic that gave Pham's design-obsessed, hyperactive kawaii side its purest airing yet. With nods to the clean, simple aesthetic of both Charles Schulz and untranslated early-manga master Suiho Tagawa, and a very contemporary retro-'80s sensibility, "J&K" strikes an ideal balance between classic kids' comics as rendered by John Stanley, and the brilliantly queasy subversions of that style purveyed by another of Pham's fellow SoCal cartoonists, Tim Hensley.

None of this was the first thing anyone would notice about the second trio of Epoxy issues, however. Pham's interest in pushing book design and formatting forward had been clear and longstanding, with his every book wrapped in packaging that pops off the shelves, and Sublife, especially, often attempting formal maneuvers I've never seen before in comics. But Epoxy issues 4 through 6 are something else entirely. Risograph printed with a mastery only a handful of other artists have shown, in a shimmering, granular three-color palette as weirdly futuristic as it is evocative of the medium's benday-dotted past, and featuring successions of smaller magazines, postcards, posters, stickers, maps, and puzzles stapled in between their covers, these are comics whose planning and assemblage clearly took as much work as their pen-and-ink creation. After spending his career striving for Ware's standard (an actual topic of narrative in Substitute Life), Pham had reached it with work that still resolutely retains his own personal voice. The three 2010s issues of Epoxy are objects to be treasured and drooled over. I still vividly remember blowing out 40 copies each of issues 4 and 5 in a week or so at the comic store that employed me at the time - those were Batman numbers for us. Few indeed are the comics whose production speaks with Epoxy's eloquence or its force; fewer still are those whose content earns a rest on such laurels. Pham carries it all off with grace.

My immediate question on learning the short, episodic J&K strips would be collected as a graphic novel was whether a professionally printed book could possibly equal the handmade, fetishistic power of the artifacts the material was sprung from. I shouldn't have worried. Pham's publishing career to date has been a march up ascending levels of production quality, and given that J&K is his latest book, I should have trusted that it'd look the best. Its offset printing ably matches the glittering waver of Pham's photoshop airbrush-enabled risography, adding a bit of extra pop to the tones while maintaining the naive charm of Epoxy with purposeful mis-registrations of each color. Everything carries the familiar, slightly out-of focus look common to mass-market old comics and craft-fair new ones, but it's also one of the brightest books I can remember seeing, one that earns "eye candy" as a descriptor if anything does. 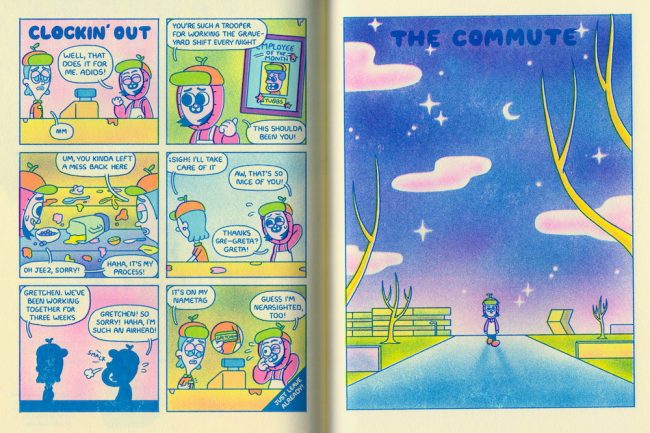 Once its rainbow covers are cracked, the book literally spills over with prizes. A mini-magazine and poster are items Epoxy readers will have seen before, but they're more or less essential additions to one of the book's big showpiece stories, providing actual physical artifacts as-seen-in the text that deepen both the book's world-building and one's own engagement with it. Pham's writerly wit is displayed on the postage-stamp sized pages of Cool Magazine, J&K's version of something like Sassy or Ranger Rick, and the more DIY (though no less pretty) design aesthetic of the Epoxys that these stories first appeared in is given an airing as well. All new to this publication are a series of gorgeous dot-screened trading cards that simulate the beloved all-ages game of "naming the dogs at the park"; a set of stickers promoting the mall which provides much of J&K's setting; and best of all, a tiny 5" vinyl record that provides a delightful Saturday morning-esque electronic soundtrack to the book it's paired with.

These extras are inherently silly things, and the book itself would stand up fine without them - but they call to the imagination in a way that simply turning pages just can't, and do much work to situate readers inside Pham's world, rather than just hovering above it. In this they not just equal but excel the bonus features that make issues of Epoxy feel so novel. As important to the sense of virtual reality the book creates is the visual world Pham has built for his perfectly designed characters to navigate, full of glowing starlit skies, impossibly bendy Lego buildings, and retro-mod fixtures. The feelings aimed for by the vaporwave genre of imagined future mall muzak are effortlessly summoned here; there is a swelling melancholy to Pham's J&K landscapes, flat and featureless expanses interrupted by wacky trees and houses at placed at mathematically precise distances from one another, swimming through a fog of neon screen tones.

The other big question I wanted an answer to was how J&K would read free of its initial context as an anthologized comic. Backed by the glowering blue-glass hush of Pham's recent episodes of "Deep Space" in Epoxy, or surrounded by a bouquet of very different artists' comics in the last couple issues of Kramers Ergot, the strip's charm and hilarity are sharpened by contrast. J&K, which follows the titular best friends/roommates/partners in crime and their social circle through misadventures that unexpectedly call up visions of Broad City rendered as a kids' cartoon, is brisk, high-energy work of the kind that can easily become schtick if not handled carefully. Fortunately, a careful handling is exactly what Pham gives his material. Each successive episode hits a different note, with the high hilarity of the first strips following a curve that's only obvious in retrospect to stories of exhaustion and anxiety that carry startling psychological depth. The humor, refreshingly, never goes away, and covers a satisfying amount of territory ranging from simple one-liners and hilarious character drawings to perfectly delivered bathroom gags and expert cringe. 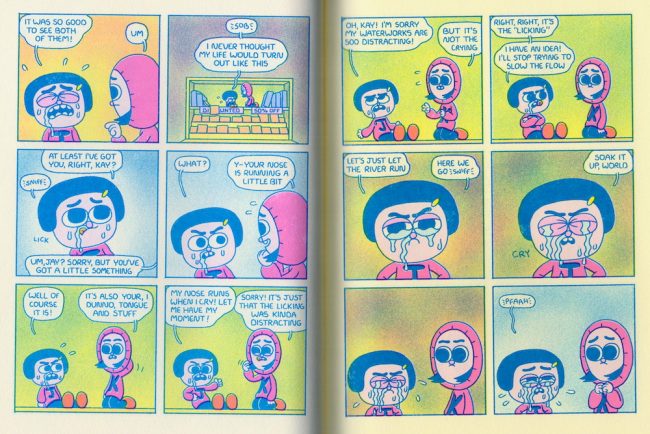 Pham's cartooning is uniformly beautiful, and he's a master of the rhythm imposed by his repetitive six-panel grid, but what really propels this work is the light touch of his writing. Characters are allowed to simply emote their way through the absurd situations they huff and puff into again and again, rather than passing snarky meta-comments or attempting to struggle their way into a different milieu. As much as the stickers or the record, this authorial sensibility is what makes the world we visit in J&K feel so bracingly livable. When the book takes a corkscrewing left turn into funny-animal comics with a previously unpublished closing sequence that pictures Jay and Kay as dogs, and their Charlie Brownish hanger-on Eggy as a cat, the progression feels natural, earned, and just as inevitable as any of the book's earlier developments. It speaks to Pham's hyper-awareness of how material like this - easily the lightest he's worked on in his comics career thus far - can grow flat if the bottle isn't shaken up once in a while.

As one moves through J&K's anthropomorphic conclusion, however, it slowly becomes clear just how different a beast this comic is from the pages that precede it. Printed on pink-tinted paper with a much wider, subtler range of flat colors than the primary-hued haze of rest of the book, the "Cats & Dogs" section's rapid-fire jokes slip away page by page to be replaced by an utterly agonizing chronicle of the dog version of Kay's physical decline and death, and Jay's transition into her exhausted full-time caretaker, as watched in helpless horror by Eggy. It's almost impossible not to feel a note of dawning horror oneself, as what's been a largely sunny book moves swiftly to a tragic end. Pham's evocation of helplessness, despair, and grief are subtle and powerfully moving; I found myself studying the pages over again in an attempt to figure out just how he was able to imbue the section's twelve-panel vignettes with such depth. It's all there from page one though - stress and codependency are Pham's underlying topics through the book, and he takes them to their ultimate conclusion for a final act. 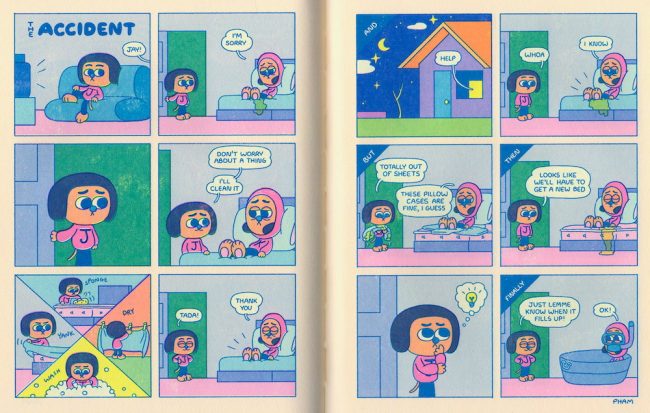 The complex combination of emotions Pham is reaching for is nothing new for comics, and especially for Fantagraphics publishes: there's Peanuts, of course, but much of early Chris Ware aims for a similar pressure point between the uproarious and the unbearable, and Simon Hanselmann has lately made a cottage industry of similar stuff. But what Pham does here feels different. Almost paradoxically, its hard lean toward the fluffy and silly, only lightly leavened with tragedy, makes it feel much more real than comics that display a greater amount of id. The fact that anyone out there is reading comics at all perhaps illuminates the truth of what Pham is doing here. Heaven knows life sucks and every day's a new calamity, but more often than not we wrestle back the darkness outside and in, and do what we can to laugh our way through. Pham's characters pick up his own magazines in order to do so a few times in J&K; it's a model worth following. Comics just don't get much better than this. 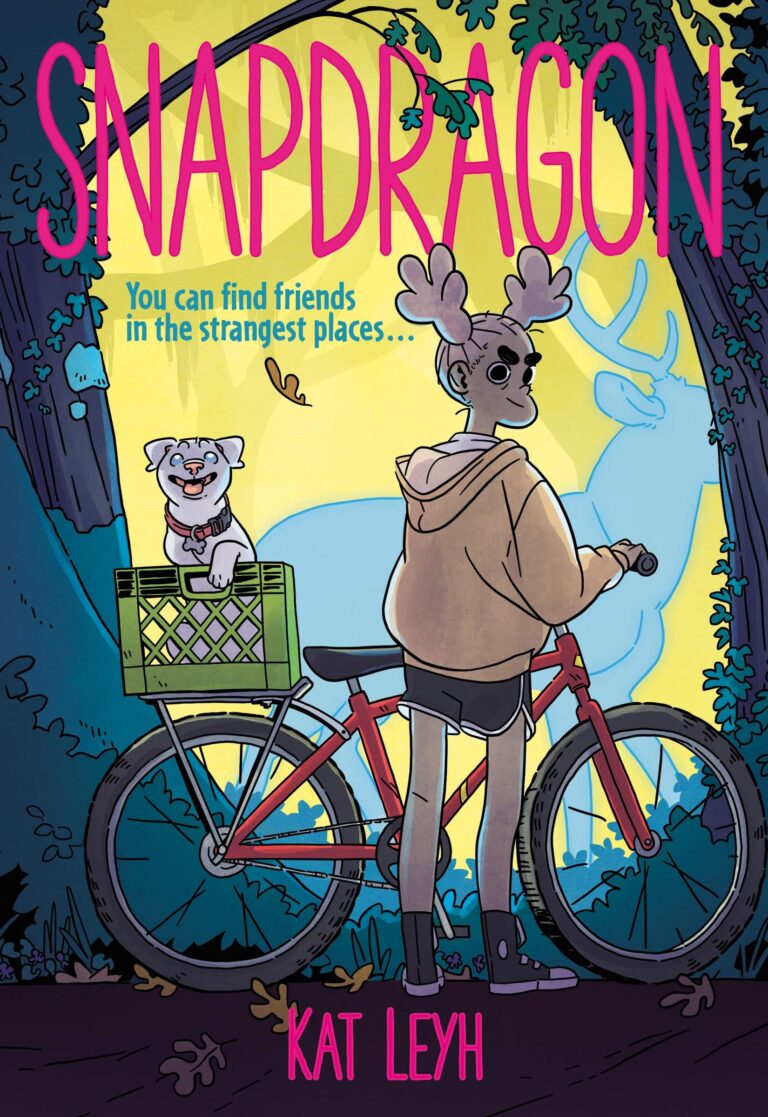 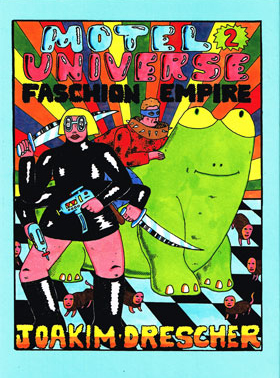