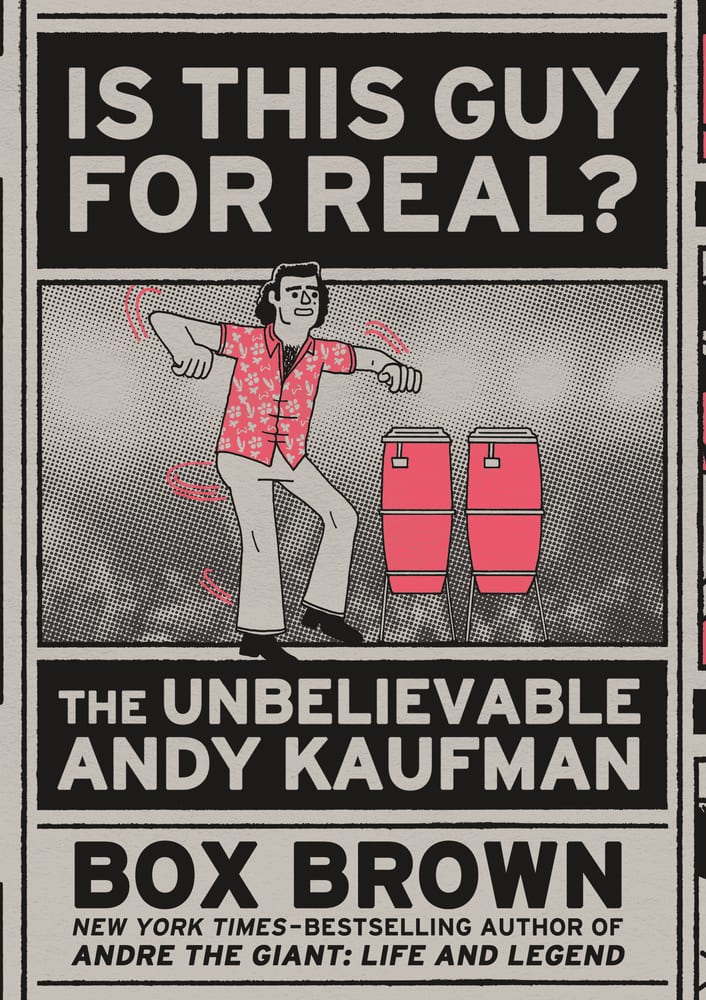 Andy Kaufman was around for just long enough to ensure that people are going to be writing about him for a long time to come. There’s something sticky about his story in the mind, despite (or because of?) its brevity. Box Brown’s new biography of Kaufman, Is This Guy For Real? – The Unbelievable Andy Kaufman is careful to trace the means by which Kaufman’s lifelong obsession with wrestling informed his approach to comedy and performance. Wrestlers adopt larger-than-life personas, complete with accents and backstories – just like Kaufman, who sometimes pretended to be a lounge singer named Tony Clifton, sometimes pretended to be Elvis Presley, and sometimes a raging misogynist. Kaufman plays every role completely straight in the moment, leading to a tendency to be confused with his characters. He played the part of a meathead chauvinist challenging women to live wrestling matches a bit too well. Clips from his wrestling appearances reveal a focused performer who learned to relish negative attention from his audience.

The approach seen here is similar to Brown’s previous comics biography, Andre the Giant: Life and Legend. That book was effective because it focused on the tendency of its titular figure to accrue anecdote and story. Is This Guy For Real? charts more ambitious territory. It attempts to tell the story not merely of Andy Kaufman’s life and career from an early age through to his death, but the story of the Memphis professional wrestling scene in general and Jerry Lawler in particular. Whether or not you think this is an effective book will probably depend on the degree to which you think dozens of pages have to be spent on Lawler’s early career but a few panels spread across the book for Kaufman’s career on Taxi.

It’s a much longer book than the Andre the Giant volume, and it’s an open question whether Brown’s sparse cartooning lexicon is up to the challenge. Because it’s longer, the sprawling structure works against Brown’s instincts here. His minimal style comes close to wearing on the reader after 256 pages.

Wrestling never really goes away. I always like to say: I don’t follow wrestling but I follow wrestling Twitter. Knowing people who care an awful lot about pro wrestling but not caring at all about the actual product gives me the spectacle of seeing people enjoying being fans without caring about the object of their fandom. Sometimes it’s fun to listen to someone talk about something you don’t even understand, because it’s interesting to them and you can get some insight and satisfaction from seeing your friends excited. People who like wrestling really get excited about it! It’s fun to see.

But the problem for Brown is that pro wrestling trivia isn’t always quite as interesting as pro wrestling find it to be. Because Andy Kaufman is an interesting fellow, moreso than Lawler. Kaufman’s story here is the story of a fanboy who grew up to join the circus and play out his fantasies on the main stage, be they dressing up as Elvis on TV or challenging every feminist in America to beat his ass. And his obsession with wrestling makes sense because wrestling is an area where both performer and audience have to collaborate, actively and enthusiastically, or it all falls apart. And they all do it, because there’s literally no point otherwise.

That’s how most entertainment works, actually. Wrestling is more honest because anyone old enough to know the difference makes a conscious choice to play along or walk away. But that’s not quite the case with something like, say, television comedy. The rules of the game are significantly different. People are supposed to go on the Letterman show to let down their guard and be honest, but Kaufman went on the show with Lawler in tow to hype up their rivalry. When Lawler took the bait and swung at Andy, it made headlines even though it was just as fake as anything they ever did wearing tights. 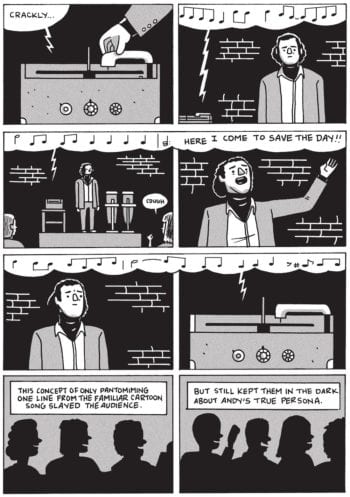 And that’s Kaufman’s appeal: he’s the guy too chaotic even for David Letterman, someone who knew where The Line was and could be guaranteed to cross it whenever possible. The way he did this, Brown’s book makes very clear, was simply by ignoring what everyone else around him was doing and staying committed to not breaking character even when he was running a completely different skit from everyone else. When Brown shows us one of Kaufman’s most famous routines – singing along to Mighty Mouse, playing the bongos, doing an Elvis impression – he’s doing a one-man variety act on a tiny stage. It’s the same kind of entertaining he learned as an older kid entertaining as younger kid’s birthday parties.

And that cuts near the heart of Kaufman’s appeal, the reason why he still lingers in the culture – there’s something very appealing in the idea of the guileless genius, set apart from the world and yet committed to following the lead of his prodigious, boyish id. But because he died at thirty-five during what was still essentially the first phase of his career, we’re left with a Steve Martin who never got to move past being a Wild & Crazy Guy, or a Bill Murray stuck singing the Star Wars theme until the end of all time. So he never got to grow old and take off the mask, and he did such a good job of not breaking kayfabe up until his death that people genuinely believed it to be a hoax for years after.

The problem here is perhaps similar to that faced by the most famous piece of Kaufmania, the 1999 Jim Carrey film Man on the Moon, from R.E.M.’s deathless 1992 hit of the same name. His life and career were so truncated, and him without any kind of second act to contextualize the events of the first, that he’s stuck in amber, a holy fool. Kaufman’s brother even tells Brown as much in the final pages of the book, pointing out that he was neither an “idiot or a mean spirited buffoon,” as the movies might have you believe. The truth was a lot more complicated, of course, but death has a way of flattening things.

Is This Guy For Real? flattens things too, as any biography is destined to do. In seeking another kind of account of Kaufman’s life Brown goes a bit too far in the other direction from depicting him as a naïf, instead showing us how Kaufman use to tie his dong down with duct tape so he wouldn’t have a visible erection while wrestling women on stage. It’s terribly incriminating. But it does serve to erase the image of Kaufman as a holy fool. He was no more fool than you or me. He just refused break character. 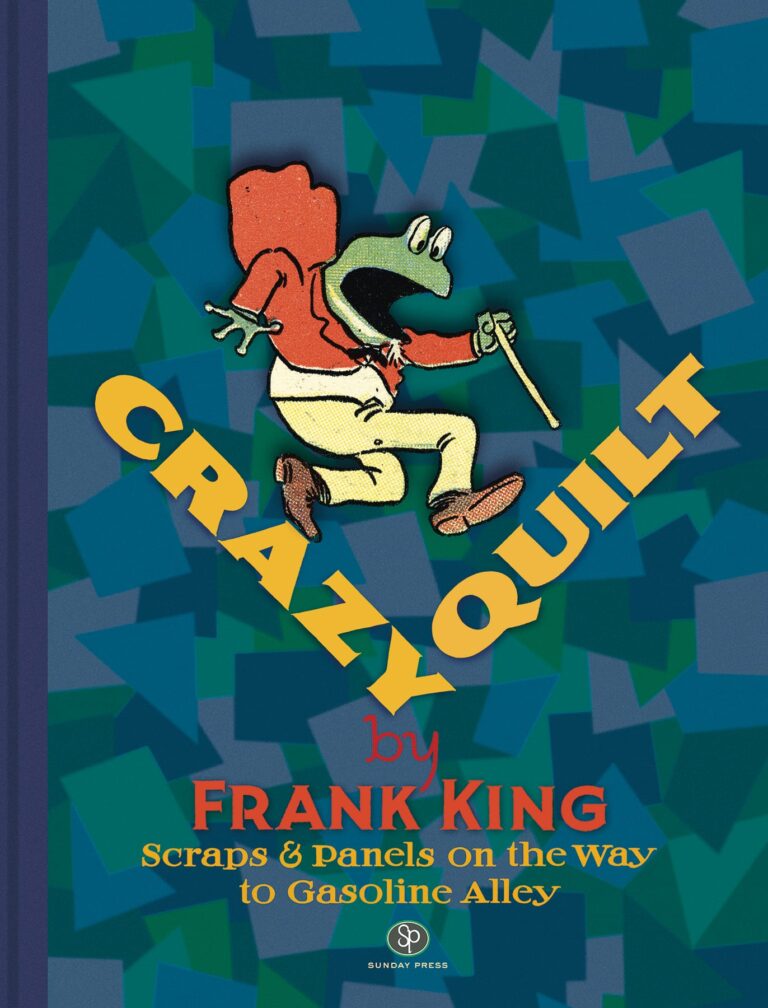 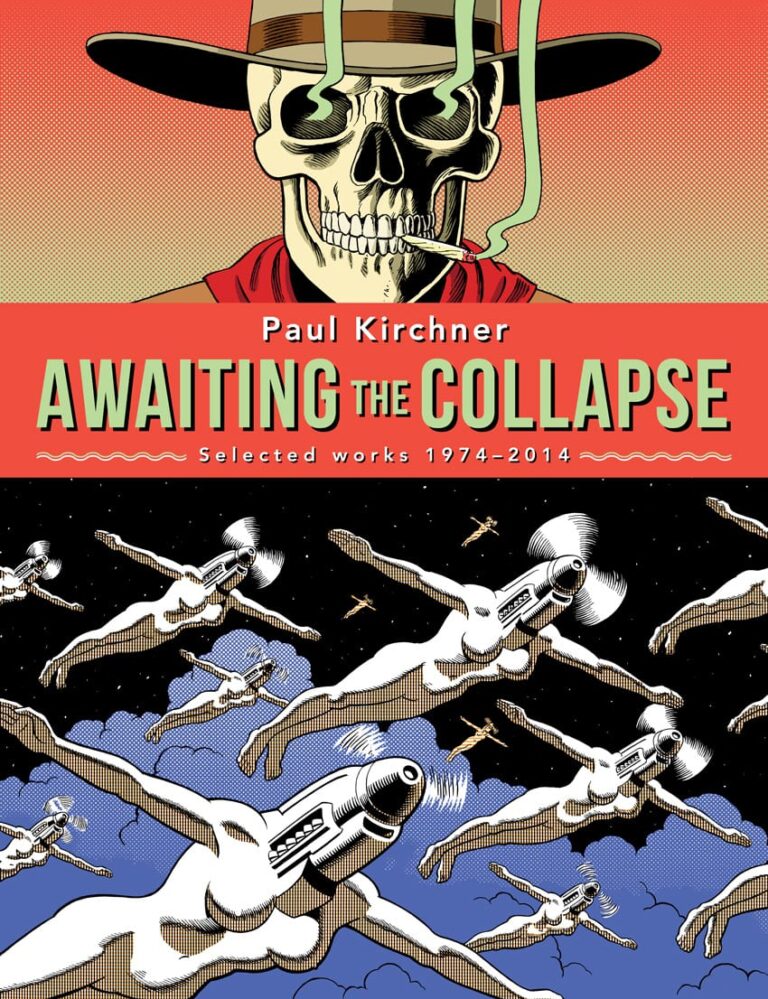