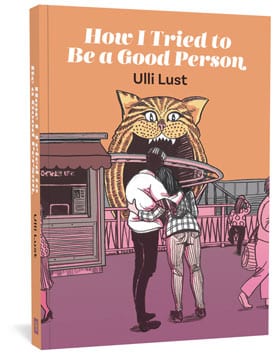 In 2013, Fantagraphics published the English translation of Austrian cartoonist Ulli Lust’s epic 464-page graphic memoir, Today is the Last Day of the Rest of Your Life. In it, Lust recounts her crazy punk-rock summer of 1984, which she spent ambling her way across Italy with a friend, both penniless, living mostly by their wits and sheer force of will. Today deservedly won accolades and awards, putting Lust on the map as a tremendously talented, ambitious, and forthright creator with a genuinely adventurous worldview.

Her follow-up, How I Tried to be a Good Person, begins a few years after Today. Lust appears more settled, yet no less driven to live according to her own lights, come what may. A thread running strongly throughout both books is the allure of wresting oneself from societal conventions—and the often-heavy costs of doing so. Lust is determined to live her truth, even occasionally putting herself in physical danger. At other times, she’s left contemplating the line between self-actualization and selfishness. Lust relates all this in an uncompromisingly frank manner, with anthropological detail. It’s a rich narrative.

As the book opens, Lust is living a relatively settled life in Vienna, though she alternates between working menial jobs she hates and unemployment, all the while struggling to get an art and illustration career going. She has a young son named Philipp (father unknown), whom she loves, but cannot support, so he lives with her parents in a nearby small town. She makes weekly visits to Philipp, who appears comfortable with this arrangement.

Meanwhile, Lust is in a relationship with a nice older man named Georg, an aging-hippy actor working in his own theater company. Lust shares an easy, loving rapport with Georg, but eventually the pair realize that while they love each other, their sexual rapport is nearly non-existent, and decide to commit to an asexual primary relationship. This seems to work out just fine until Lust meets a Nigerian man named Kimata at a party and falls into a super-heated sexual affair. Georg, after initial misgivings, adjusts to the situation. But Kimata is a product of his native culture in which women remain subordinate to men. Compounded by the powerlessness he feels as an African immigrant experiencing systemic racism, particularly in employment, he tries to assert control over Lust with increasing force, leading to some harrowing, violent situations. 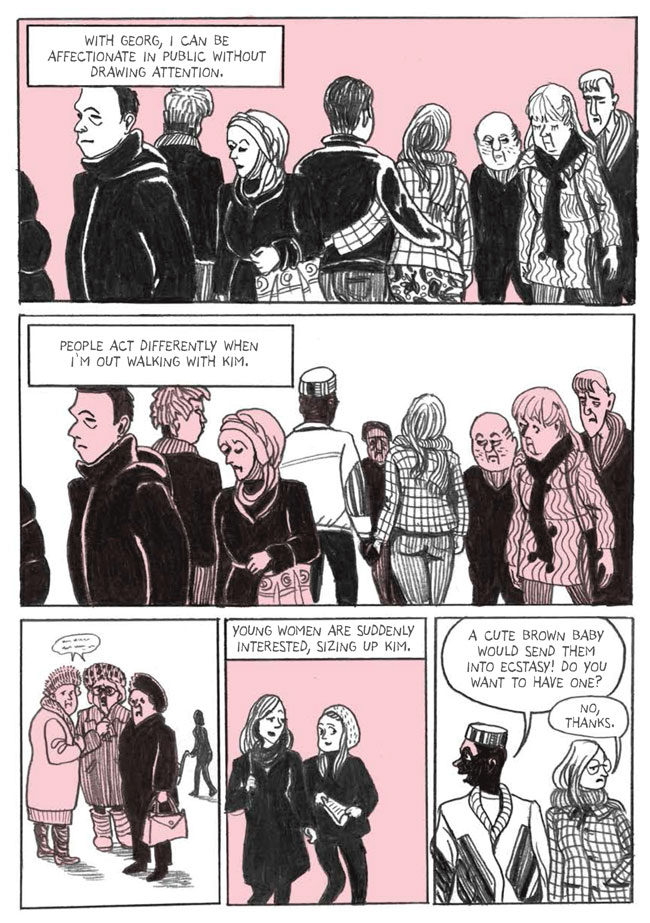 An important strand of the narrative focuses on complicated gender relationships and the ways in which cultural mores shape them. In her relationship with the mellow Georg, for example, Lust seems to fall into a submissive role, letting him take the lead, likely out of regard for the wisdom of his age and experience. But Georg relies on Lust as much as she does him, and she never hesitates to offer Georg her opinions or advice. Throughout their ups and downs, their bond seems strong. Contrast this with her relationship with the rigidly traditional Kimata: Lust’s strong sense of self and personal autonomy do not go over well, resulting in often terrible conflicts. Lust captures the eventual cycle of abuse in vivid detail, with its “honeymoon periods” followed by explosions of rage. As things regress, Kimata transforms from hot lover to screaming anger, and Lust notes, “No warning lights signaled the reverse thrusters.”

In one sequence, Lust has a conversation with Kimata (during one of his calmer moments) about the Nigerian practice of female genital cutting. In a brief series of panels Lust illustrates Kimata’s explanation of how and why this is done: to reduce sexual desire and pleasure, thus keeping women from becoming sexually autonomous. Lust illuminates the subject, adding to her narrative without becoming didactic, and providing more insight into the origins of Kimata’s sexism.

As in her first book, Lust is candid about her own limitations. For example, though she clearly has affection for her young son, Philipp, she admits how exhausting it is to spend long, uninterrupted time entertaining him at her parents’ village home, and how relieved she is when it’s time to return to Vienna. She clearly feels guilty: “A real mother yearns for her child to always be with her.” But when Philipp unequivocally states that he prefers living with his grandparents, Lust acquiesces: “I only feel a little crummy.” She’s as unconventional in motherhood as in the rest of her life.

Lust’s cartooning remains as fine as ever. Her panels shift from detailed naturalism to bold expressionism as the story requires, yet the stylistic adjustments are fluid and unified. She begins each chapter with a silent, single-panel drawing, setting the scene for the action to follow. Whether depicting a garden, a busy railway intersection, or the exterior of Georg’s apartment house, these atmospheric, palate-cleansing moments anchor the narrative and give Lust the opportunity to show off her considerable artistic chops.

Lust is also uninhibited when depicting sex. The generous scenes of her and Kimata going at it are unabashedly explicit, full of heat, energy, and sweat. Meanwhile, Lust is thankfully more circumspect in the sequences of domestic abuse, often placing it off-camera or using heightened, expressionistic effects to effectively illustrate Kimata’s frightening wrath. 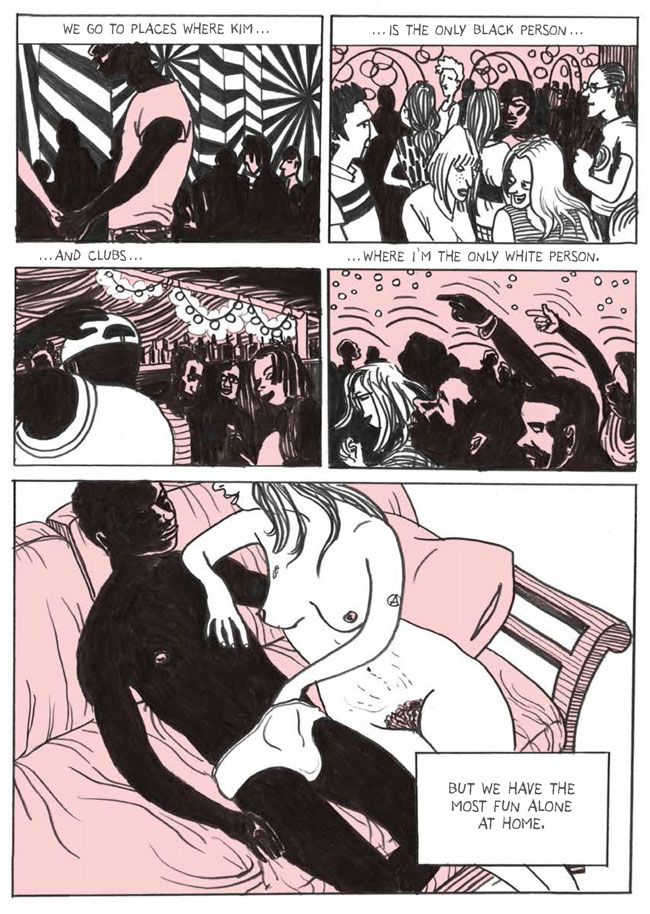 Toward the end of her saga, Lust has managed to extricate herself from Kimata, but in doing so has paid some heavy prices. Looking ahead, she has a middle-of-the-night epiphany and decides to study art in Berlin. “Why not?" she thinks. "I’ll retroactively correct my mistakes.”

Lust seems to create autobiographical comics in part as a way of bearing witness to her life, noting—but never wallowing—in her screw-ups, trying to make sense of them and move forward. Since she seems unable to live a buttoned-down sort of existence she'll undoubtedly get into more trouble up ahead, but she seems to accept this as the natural order. And we, her enthralled readers, are with her every step of the way. After all, as Georg reminds her Shakespeare supposedly once said, “Every comedy is a tragedy that hasn’t ended yet.” 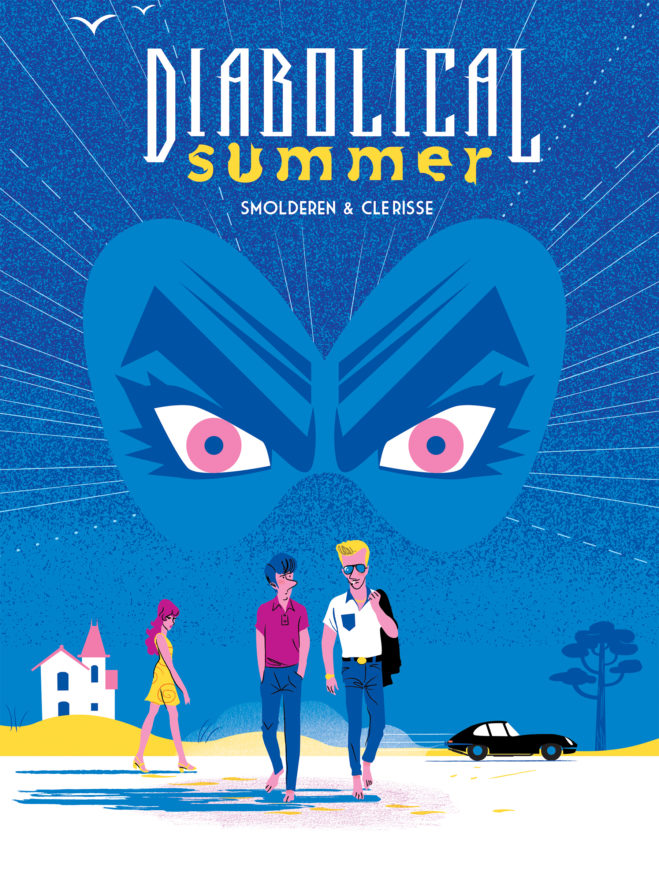 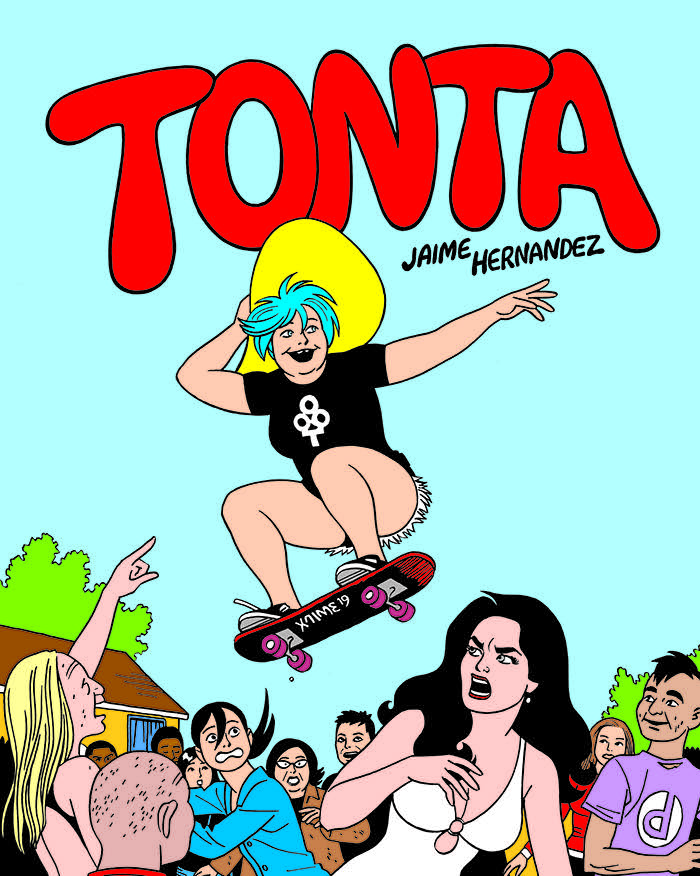