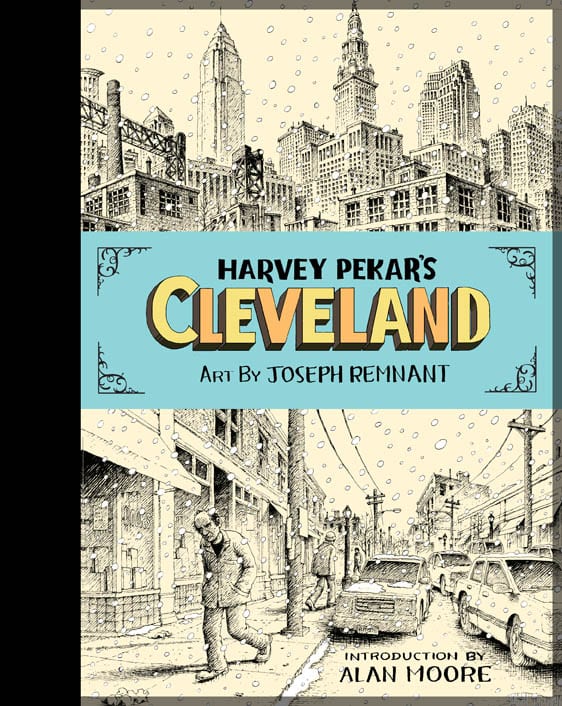 Watching the comics medium evolve over the last forty years—after arguably being in a rut for just about as many years prior to that—has been a thrilling thing to see. The late Harvey Pekar was, without question, a major player in that development. This fact is all the more remarkable because he did it strictly as a writer. Specifically, he brought a literary approach to comics more associated with written fiction than anything comics had seen up to that time.

Harvey Pekar’s Cleveland, starts out with a bang with Pekar’s account of the Cleveland Indians winning the 1947 1948 World Series. Pekar, and the book’s illustrator, Joseph Remnant, do a great job of depicting this magic moment. 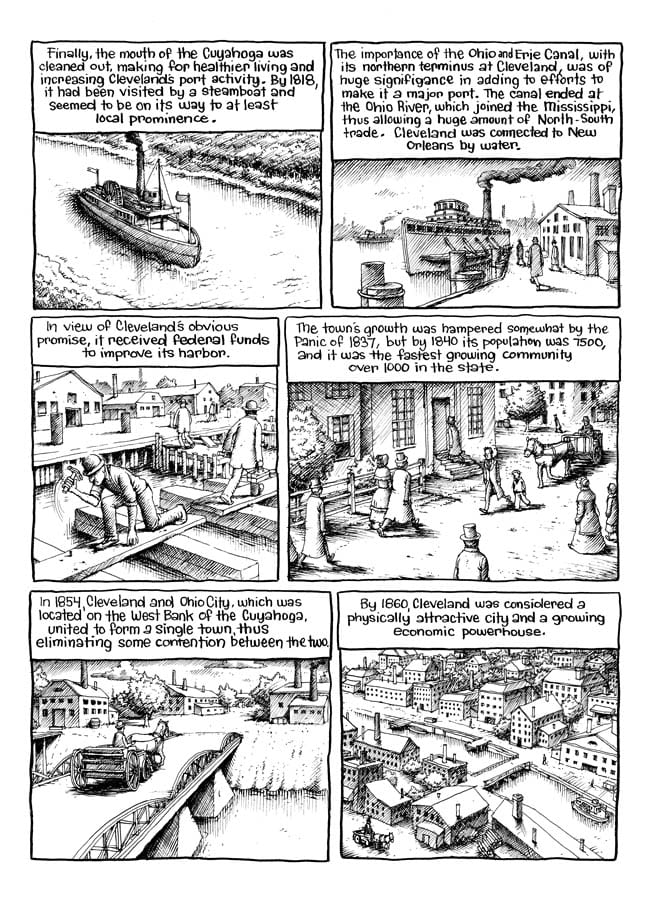 I was a little too young for that one, but I vividly remember the 1954 series when the Indians almost did it again. This is also referred to in the book. In fact it is effectively used to illustrate the gradual decline of Cleveland through the remainder of the twentieth century. There is a certain irony in this because Harvey’s story, with its various ups and downs, is essentially a story of a life well lived. Fascinating highlights of that life are vividly depicted throughout this book.

Harvey Pekar’s Cleveland, co-published by Zip Comics and Top Shelf, is the first book of new material to come out since Pekar’s death. However, Pekar was involved in its production and was enthusiastic with its early progress at the time of his passing. It is a fitting memorial because it is a stellar achievement in so many ways. The book is a fabulous kaleidoscope of people, places and things, but never loses sight of its primary objective: to tell about and make a case for that much maligned city, Cleveland, Ohio.

Thanks to Joseph Remnant’s superb artwork, you become increasingly well acquainted with the physical look of Cleveland’s evolving landscape. Cleveland’s mighty Terminal Tower, once briefly the tallest skyscraper in the world, is shown in various contexts and seemed like an old friend by the time I finished reading this book. 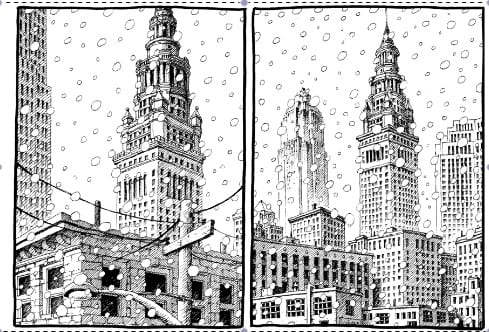 Joseph Remnant is a relative newcomer to comics, but I have been a fan ever since I saw a great three-page strip of his in Mineshaft #24 about three years ago. His contribution to the success of this book cannot be overstated. I think it is worth mentioning that Remnant’s style is reminiscent in some degree to that of Robert Crumb. But I also think that influence serves this book particularly well, since Crumb did indeed illustrate some of Pekar’s most memorable stories. Not to harp on this, but one thing Remnant did in terms of Crumb’s influence that works  well here, is that he seems to specifically homage Crumb’s classic page, “A Brief History of America”, in the book’s prologue about Cleveland’s early history. His fine job there elevates what might have been -- and so often is in other works -- a relatively tedious part of the book.

Not only did Remnant draw this book but, along with Chris Ross, he designed it. And the book has a great look over all. The two drawings on the cover show you at a glance what the book is all about better than any words ever could. Without question, Remnant is a rising star in the world of art and comics.

Pekar was always known as a curmudgeon. That quality is still here, but there is a surprisingly strong feeling of optimism as well. Without ever descending to smarminess, this is a book with a lot of heart. In many ways it is a fitting summary of Harvey’s life as depicted for so many years in his stories. But curiously, it could also serve very well as an introduction to that world.

Some fascinating new aspects of this life and world are on display. Some are wonderfully fleeting, like Harvey’s delight in the taste of ten cent chocolate malts sold in Higbee’s department store. Particularly interesting is Harvey’s description of the courtship, marriage and divorce of his second wife, and later, his more successful marriage to Joyce Brabner. There are also new and interesting observations about his well-known encounters on TV with David Letterman. The ups and downs of his book and record collecting are quite entertaining. As a life long accumulator of both, I found much to relate to there.

I also enjoyed his description of his forays into the world of literary criticism. I well remember his articles about George Ade, Stephen Crane, and other great American fiction writers that initially appeared in the pages of B. N. Duncan’s Tele Times. (A periodical with a typical print run of about one hundred.)

I think this illustrates a truly interesting quality about Harvey Pekar: he was no snob. If a person wasn’t utterly boring and had something interesting to say, Harvey was approachable. He was a good listener and it was a quality he managed to hold onto as he gradually became famous. I believe it is one of the things that made him great. It is certainly one of the things that makes Harvey Pekar’s Cleveland such a notable standout among his many books. 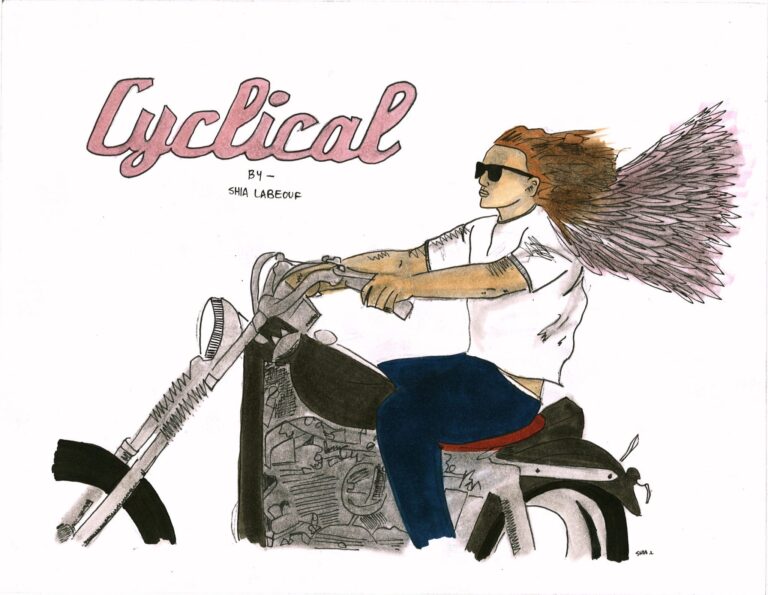 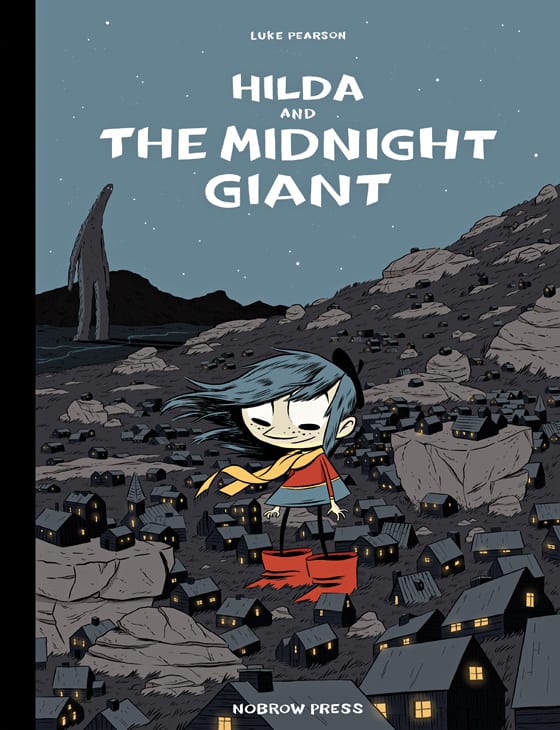